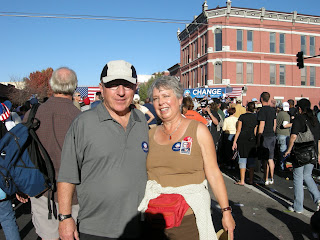 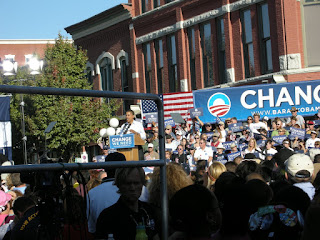 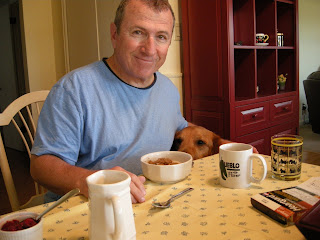 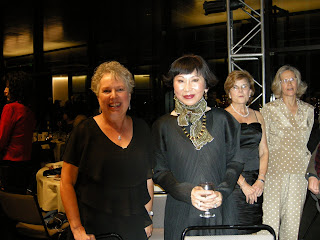 It has been quite a week around here. Last Saturday night, we went to a Black Tie Dinner with Amy Tan as the guest of honor. Some of you may not know that her brother is the owner of the Abriendo Inn where we had our family pictures taken last year. He had just purchased it last year, so I didn't know he was the owner when we were there. She was here for a family reunion and as a guest of honor for the All Pueblo Reads selection of The Joy Luck Club. As our family did when they were here, Amy Tan's family was also having a portrait done by Leslie in the backyard of the Inn.

Now the Big News: Obama came to town for the second time in about six weeks. This time we decided to go down and be a part of the mix. History was being made after all. I wasn't sure if we had the stamina, but we actually did the whole rally thing and were able to survive it. We got to the line to get in at about 11:00 a.m. It was 81 degrees out, so it was quite warm. The line went from "D" Street on Main, up over the Main Street bridge to nearly Abriendo. We hiked up the hill on to the end of the line and took our place. I had fun talking to the people in line while Jim wandered around talking to friends he saw and etc. The gates opened right at 1:00 p.m. Everything was very well organized. The stage was built to span Union at "D" Street. We were not very far back from the stage, but he chose to go to the north side of the street, which happened to be behind the bleachers for the press, for two reasons. There was shade, and the porta-pots were right behind us. (Men of a certain age will understand why that was necessary.) Actually, we had a nice place and nice people to visit with so the time went by quickly. Obamas, Michele first and the Barack, were finally on stage around 3:15. I caught much of the speech on my camara, but haven't quite figured out how to download it. Anyway, it was a great day and quite exciting.

I am posting a cute picture of Buster trying to get Jim's oatmeal that I took yesterday and then one of Jim after our long day.
Posted by Sally Wessely at 10:33 AM No comments: