The Happy Moments of The Holidays 2010

Forgive me for just now posting some Christmas photos.  My daughter was asking that I share a few, so here are some of the memories from Christmas 2010 that I was able to capture.  As a side note, my husband just got a new camera, so he was in charge of photos this year.  Most of these are his, not mine.  Maybe by next year, I have a new camera that I will be practicing with.

Pre-Christmas Celebration at Our House 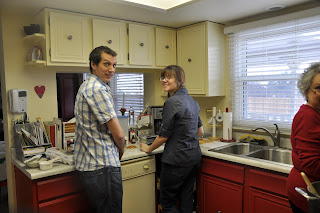 Jonathan and Samantha and Atticus were the only family visitors who actually made it to our house this year.  They came down from Colorado Springs where they were staying with Samantha's mother for a visit with Jim and me around the 21st of December.  I put Samantha to work making cookies while I made split pea soup.  Samantha loved making pizzelles, so guess what I went out and got her for Christmas?  A pizzelle maker found its way under the Christmas tree for her. 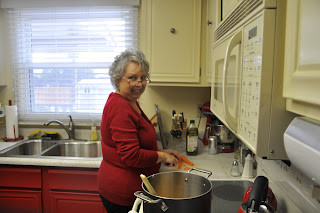 My husband had to capture a picture of me cooking.  I do cook once in a while, but it seems I am learning how to cook all over again.  To everyone's disappointment, the split pea soup was not very good.  Jon wanted to know why since I used to make such good split pea soup.  Two reasons:  I am relearning to cook, and I didn't let it cook long enough because I knew everyone was hungry. 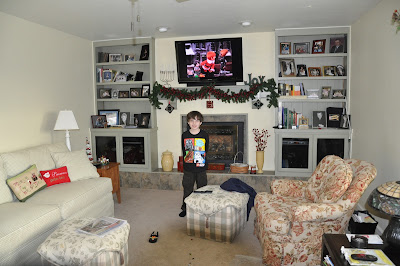 While we were cooking, Atticus made himself at home in the family room by watching t.v. and playing with a toy he had brought with him.  It was good to have Atticus in the house again after having him gone for a year and a half.  It was good to have all three of them back in the United States! 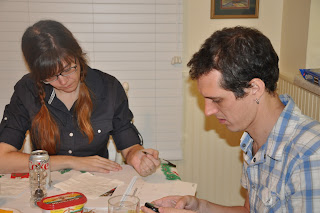 Jon and Sam decided they needed to a little advance planning for the upcoming holidays.  With a calendar, napkin, cell phone and pen in hand, they got busy planning the days they had in Colorado before they were to head back to Boston.  Bangladesh to Colorado to Boston:  that is a long trip to make.      The last part of the journey from Colorado to Boston was to made by car.

Sam is diligently planning and writing out her plans on a napkin.  As she said, "All great plans started out being developed on a napkin." 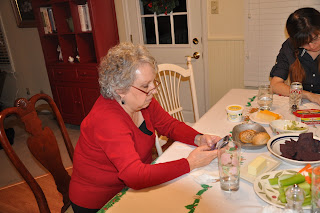 While they planned away, my husband caught me checking my ever present Blackberry. 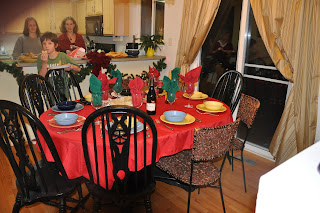 Daughter Amy opened up her home for the Christmas holidays.  Her home in the northern part of the state was located closer to Utah and the airport at DIA, so it seemed to be a better choice for the family gathering.  She had a very full house of siblings, nieces and nephews and friends.  Grandma and Grandpa stayed at a nearby hotel. 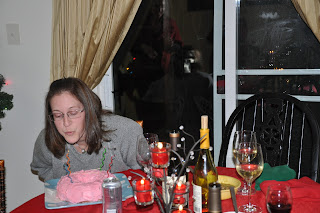 Christmas Eve dinner of green chili and tamales was delicious.  Amy set a beautiful table for us.  Joni, Julie's and Amy's friend joined us in the celebration of Christmas Eve and Joni's birthday.  She even brought her own cake for us to have dessert.

After dinner, the children played a few games, and then it was time for them to open one gift each.  Each grandchild had a package under the tree from Grandma Sally.  Inside of the look alike boxes were new Christmas pajamas.  This little project, thought of just before Christmas turned out to be one that took some doing.  Have you ever tried to find four pairs of matching boys pajama bottoms in sizes 16 to 10?  Then, trying to find tops to match the bottoms was even more of a challenge.

The surprise of it all was worth the challenge.  I thought it would be so much fun to have all the grandkids in matching p.j.'s.  Who knows when they will all be together for Christmas again.  (Only six of seven grandchildren were there.  One daughter and her daughter were not able to come over from Utah.)
I found the boys' pajamas, matching fleece bottoms at Penney's.  I was afraid I'd never find matching tops, so I bought each boy new white t-shirts to wear just in case I could find tops.  They ended up liking the t-shirt best anyway.  I found the pajama's for the girls at The Children's Place. 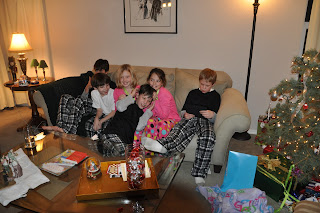 An attempt to get a group shot of the grandchildren in their new Christmas pajamas proved to be unsuccessful.  There were just too many moving parts!


After everyone under the age of 14 was ready for bed, it was time to remind them that the sooner they got to bed, the sooner Santa could come.  After a check on the computer to see where Santa was in his trip to Colorado, it was decided he was getting close.  After all, Atticus had just flown from the North Pole just about ten days before.  If Santa was in Nebraska, he was getting close.

The kids and the adults all agreed that Christmas morning gift opening would begin at 7:00 a.m.  Then, the kids were all off to bed.  The adults got out Trivia Pursuit, and Grandma Sally and Grandpa Jim went back to the hotel.

I will write more about Christmas in another post.