A Room with a View

This has been my view since Saturday night. The view is great even if the location to obtain this view is not. I'm on the ninth floor of Penrose Hospital. I'm hoping I'm released before I finish writing this blog post. I spent my Mothers's Day here. I spent yesterday here. I've spent half of today here. I'm watching a storm roll over the mountain. After watching folks on the street below my window walk, jog, or bike in the sunshine while I was cooped up inside, I have little hope of feeling "sunshine on my shoulders" if or when I'm released today because rain in in the forecast. 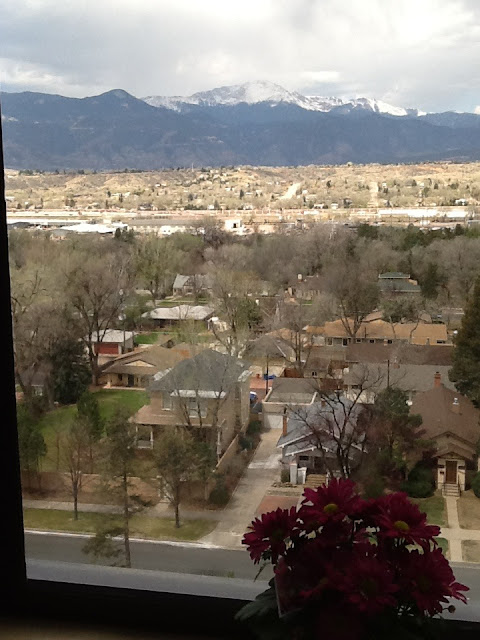 I'm breaking a rule of advice my father always gave me by writing this blog post. "No one wants to hear about your maladies and surgeries," he'd say, but here I go writing of such things even after his advice.  For weeks, I've not blogged much, nor have I done much of anything, because I've been unwell. I've had more medical tests than I've been able to keep track off.

For years, I've had chronic problems with my esophagus and digestive track. After my ninth scope of my esophagus in January, I decided to get a second opinion from the GI doctors at National Jewish Health in Denver. I've been fortunate enough to be a patient at this prestigious hospital  for respiratory problems for the past seventeen years. My wonderful doctor at NJH, an outstanding doctor who has been treating me, caring for me, and listening to me at least once a year since 1996 referred me to their GI docs. Since my initial consult with the new doctor, I've had enough tests to make my head spin: CT scans, ultra sounds, MRI, colonoscopy, and there are more to come.  Unfortunately, I have more than one type of GI problems.

In the meantime, I've continued to have terrible upper right abdominal pain. On this past Saturday evening,  after two days of persistent pain, I had my husband take me to the ER. This was my fourth visit to the ER since Easter. This time, the lipase levels were up high enough to get the doctors' attention in the ER. Thankfully, the surgeon I had consulted just last week for the possible removal of my gall bladder was on duty at the ER. After reviewing my symptoms and my blood work, he determined I should be admitted to the hospital for monitoring, observation, and for further testing.

I was told I would have a HIDA scan  on Sunday.  So, I spent Mother's Day in the hospital waiting for this test.  This meant I had only fluids coming into my body via an IV.  So much for the nice brunch that my husband had made reservations for at the Fine Arts Center.  I was very disappointed, frustrated, and upset that I found myself in the hospital on this special day, but on the other hand, deep down inside, I knew I couldn't eat anything anyway.  Food has just not been agreeing with me.  It hasn't for weeks.  Finally, at about 4:00 in the afternoon on Mother's Day, the doctor, a hospitalist, met with me and told me the test would not happen until the next day. He said I could order anything I wanted from the hospital menu because they wanted to see if I got sick.  (That seems a bit sinister, doesn't it?)  I chose wisely and ate salmon and other low fat options.  Once I finished eating, I was told I would have nothing else to eat until after the test scheduled the next day  for "first thing in the morning."

In reality, I finally had the HIDA at about 1:00 in the afternoon.  The test showed that there wasn't enough criteria to prove the gall bladder was not functioning.  Even before the test, my GI doctor in Denver had told me that based on my symptoms and the MRI, she suspected I had a condition called Sphincter of Oddi.  After having the HIDA, even though the tests showed no remarkable signs of a non-functioning gall bladder, I became quite symptomatic.  My symptoms became worse after I ate my hospital sanctioned low fat dinner, the first meal I'd had on Monday.  By bedtime, I was given morphine for pain.

As predicted when I started the post, I was released to go home after the sun went away and the rain began to come down.  Before I was released, I was advised to talk to my GI doctor at National Jewish Health about having the test and procedure for Sphincter of Oddi done.  As I already knew, this procedure is only done at the University of Colorado hospital in Denver.  I called Dr. M at NJH and told her nurse what was going on. Within an hour, Dr. M was on the phone calling me.  She said, "I'm sending a text to Dr. S at the University Hospital to see you ASAP."  I told her a text sounded pretty impressive.  She laughed and said they were close colleagues and she was sure he would see me as soon as it could be arranged.  In the meantime, she said I was to meticulously follow a fat free diet and go immediately to the hospital for my lipase levels to be checked if my pain got worse.  She said she doesn't want me to get pancreatitis.  Believe me, neither do I.  The pain I've had is bad enough.

So, the testing continues.  I still have no answers, but I believe we are on the right track.  I am grateful that I was fortunate enough to have the wonderful doctors at National Jewish Health looking after my health.  I have never known a place that is more responsive to medical needs or more thorough  in checking for the cause for a problem.  They don't just treat the symptoms.

I am also very fortunate to have great medical care here in Colorado Springs.  The surgeon who was consulted on the gall bladder didn't just jump in and take it out.  He made sure all things were checked out.  My  GI doctors in Colorado Springs were on the case while I was in the hospital.  The PA that has cared for me for years popped in twice to check on me, consult with me, and do her part in getting to the bottom of this, while also bolstering my spirit.  She has always taken so much time with me, listened to me, and treated me with extraordinary care.  Just seeing her smiling face when she appeared at the door of the hospital room and walked to my bedside lifted my spirits.  I felt a friend had come to visit; she was not just someone from the medical profession.

In the meantime, I wait until I can get more answers when I go to the University of Colorado Hospital.  I will not be eating any hamburgers!  I will be meticulous about not eating fat.  I hope I can dodge the bullet when it comes to having anymore attacks before we get to the bottom of this.

One thing is for sure, I had a memorable Mother's Day.  Amazingly, I didn't feel sorry for myself.  I didn't let myself go there.  I felt loved and cared for by my wonderful husband.  I talked with each of my children.  I was visited by a step-daughter.  A pastor from my church came twice to visit and pray with me.  I was cared for by some wonderful nurses who gave up a Mother's Day with their families in order to care for those in the hospital.  And, I had a wonderful view of Pikes Peak in a room all to myself until late last night.

I am going have my husband take me for that special brunch just as soon as I can eat again.  He's not getting off that easy.  I'll wear the beautiful amber necklace that he gave me for Mother's Day when I finally get to go to brunch.  Isn't it beautiful?