Summer Memories Are Being Made

A pair of black shorts and a red t-shirt were found under my footstool in my study, these forgotten clothing items will be mailed tomorrow. The beds all need clean bedding.  The pile of dirty towels have been laundered (thanks to my dear husband) and await folding and putting away.  The wall boards need a good wiping down. The dirty footprints have been scrubbed from the tub. The few days with three of the grandchildren are over.  Today, unmotivated, I sit, very much at peace with the world, and reflect on the great memories that were made in the past week.

Blackened bottoms of the feet and of the hands are common at my house when the grandchildren are here.  When they were younger, in self-defense, I put a tub of warm water, a bar of soap, and a towel at the back door so they could wash their feet and hands before entering the house.  I am not a clean freak.  I gave that up when I had five kids, but the black feet from trampoline jumping were leaving black marks everywhere.  I fought back with soap and water.  Summer at Grandma Sally's house means that much time will be spent jumping on the trampoline, and the trampoline gets the jumper dirty no matter what we do to the trampoline itself.  I wouldn't have our memories any other way.  Sometimes having fun means making a mess, and that is ok in my book.

Hannah and Mason came and spent a few days with me over last weekend.  Unfortunately, I wasn't feeling well on Saturday, so Grandpa Jim took them swimming.  By the evening, I was feeling well enough to go to our favorite Mexican food restaurant and then take Boston for a walk at the River Walk.  Mason and Hannah had their first experience of walking Boston.  He did great with them, and they did well with him.  Walking Buster at the River Walk had always been one of Mason's favorite things to do since he was just a small child, so he was really looking forward to walking our new pup Boston.

On Sunday, Hannah was a bit impatient waiting for Atticus to arrive.  She and Mason had thought he would be here when they arrived on Friday evening.  Atticus had been staying with his other grandmother in Colorado Springs since his parents returned to Boston the week before.  He did not arrive at our house until Sunday.  Hannah and Atticus are just a month apart in age, so they always look forward to being together.  Meanwhile, as she waited, Hannah read the Sunday comics while sitting in Grandma Sally's chair in the "newspaper room."  Our front living room, seldom used except for Saturday and Sunday morning newspaper reading, was dubbed by that name when the grandkids were little.  We found a note written by one child to the other, "Meet me in the newspaper room."  The name stuck. Once Atticus arrived, I decided we need to go on a picnic.  Veggie chicken nuggets, fried chicken, potato salad, chips, cantaloupe, and Oreos were packed in the cooler and off we went to the mountains.  Everyone was in great spirits as we piled into the car and took off.  Boston was especially thrilled! 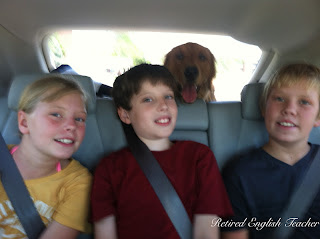 Lake San Isabelle was our destination.  A favorite spot of mine because of its beauty and easy access from our house, I knew the kids would have fun playing in the mountain stream that flows into the lake.  We all looked forward to going someplace cooler.  It was 99 degrees in Pueblo when we left, and it was 77 degrees at Lake San Isabelle when we arrived there about 30 minutes after leaving home.  The cool, mountain air felt great.


After eating, with Grandpa Jim leading the way, the kids grabbed their towels and headed out to find a place to play in the water. 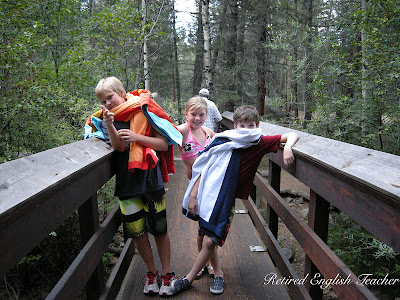 They found the 'perfect spot' which was really just the first spot they came to where there was easy access to the water.  They quickly scampered across the stream to set up a place in the sun. 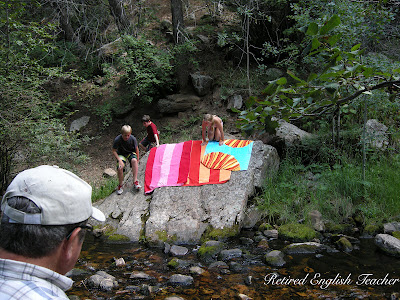 Boston loved the water.  No surprise there. 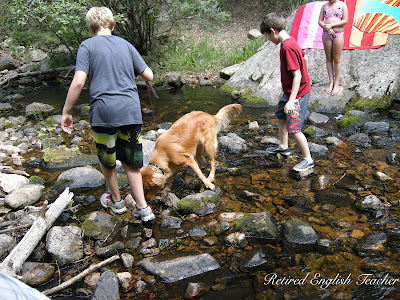 Atticus poses in the middle of the cool Colorado mountain stream. 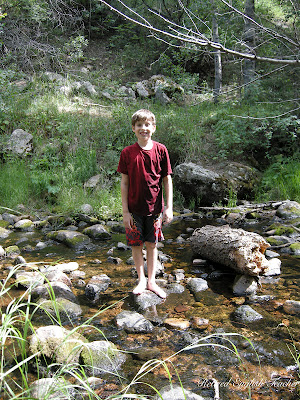 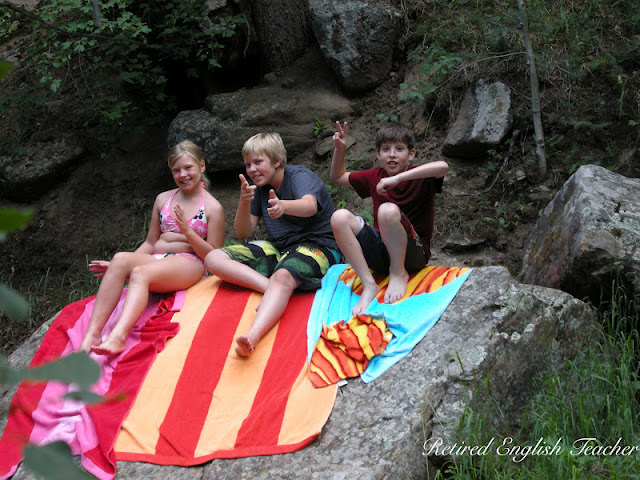 Since Boston kept drinking the mountain stream water, Grandpa Jim took him back up to the picnic site to work with him on some new training he was doing.  We didn't want Boston to get sick since we had just nursed him through a severe bacterial episode that required two visits to the vet.  One visit was overnight.

I sat on the side of the stream and recalled many, many happy days in childhood when I played with my many cousins in the most wonderful mountain stream ever at our favorite camping spot that we called "The Green Spot."  Green it was, and the stream was always perfect for wading and for building dams to create 'swimming pools.'  As I sat watching the kids play lost in my own memories, I started to get nervous.  What if a bear came along?  We had been warned by our next door neighbors, and the warning was confirmed by the ranger, that there were bears up at San Isabelle Lake camping areas.  Our neighbors had just returned from camping at the same place we were heading and had seen bear, right at their camping site, several times.

I decided to go find Jim and take the dog from him so I would have a dog with me to warn me of bears. The kids decided they were done playing in the water.  They said it was full of parasites.  They could see them they said, so off we went to find Grandpa.

We found him standing up on the road and surrounded by people.  They were all looking down the mountainside at something that held their interest.  As we got closer, I saw many in the group seemed to  be taking photos with cameras and cell phones.  I knew they had to have seen a bear.  Sure enough, that is exactly what they were all staring at.


It turns out that Jim was concentrating on Boston's training, and I guess Boston was concentrating on Jim (for once) when a crowd of people started shouting at Jim that there was a bear by him.  Jim said it was about 20 yards away from where he was working with Boston at a campsite.  So much for Boston warning us if a bear was around!


The kids were very excited and wanted to see if they could see the bear.  We ventured down the hill a bit, and sure enough, there he was.  Unfortunately, I had not brought a good camera with me on the picnic.  All I had was my point and shoot that the kids reminded me I had sat on and broken when were up at San Isabel Lake a few years ago.  They are right.  I did sit on it.  It was fixed and still takes pictures, but not very good ones.


The bear is just to the left of center.  He is the dark black spot.  Really, it is a bear.  Trust me on this. 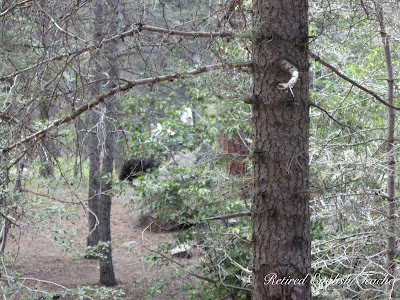 Here is another shot of the bear.  He is near the picnic tables near the center of the photo.  I did not get a good shot.  He wouldn't stand still, and I wasn't going down there to get a better shot.  Jim said he had been working with Buster near the red pump.  The bear was up near the trees at the front of the photo when he saw him.  He measured by estimating a football field and was quite sure the bear was only 20 yards away. 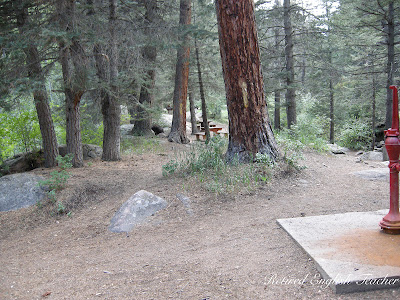 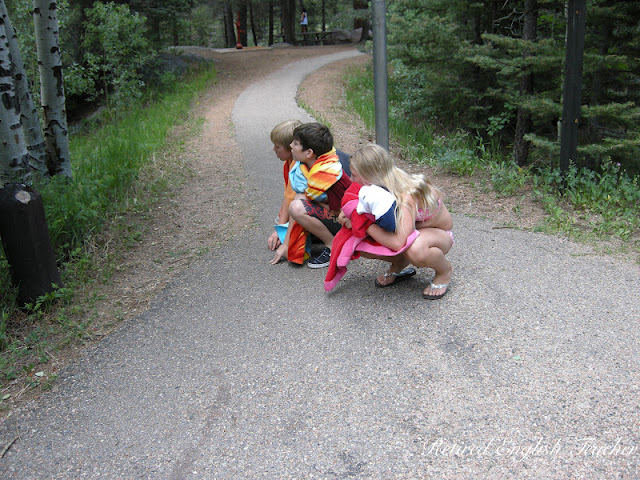 All in all it was pretty exciting.  I caught this great photo of the kids looking at the bear. The experience provided a great Facebook status update.  Then, I worried the parents would never let Grandma Sally take their children on a picnic again.  Son Jon said, "Damn spoiled kids.  I've been in hiking and camping in the woods for 34 years and never seen a bear."  Guess what, neither have I.  This was a first for me too!


It all makes for wonderful memories and some great stories in years to come.  I can just hear the grandkids as they meet for reunions in years to come, "Do you remember when we saw a bear when we went on a picnic with Grandma?"
Posted by Sally Wessely at 10:04 PM 33 comments: