Winter Arrives and It Is Good to Stay Home

Winter arrived today.  Well, technically, the calendar states that it is still autumn.  What I really need to say is that it snowed today, and it has been very cold.  It feels like winter.  On days like today, retirement is appreciated more than ever.  I spent the day working at my desk.  As I gazed out the window all I could see was white.  The earth and the sky seemed to have blended into one color.  The sameness of the scene outside my window was disrupted as I noticed a huge buck walk past.  He was covered with snow and seemed to just be out taking a walk through the neighborhood without his entourage of doe.  I guess he wanted a bit of peace and quiet.

I admit I get a bit jaded and cynical when it snows.  The news stations only seem to report one story after the other about what to do if you are out in the snow.  There are stories about how to drive in snow, stories about making sure your pipes don't freeze, and stories about keeping the sidewalks cleared.  I want to say, "Come on people, we live in Colorado. We are in the mountains.  Learn to drive in it or move."

I recently wrote on facebook that I was grateful that my father taught me how to drive in the snow.  We lived in Leadville, Colorado when I learned to drive.  Leadville has an elevation of 10,152 feet.  According to wikipedia, Leadville has an average of 142.7 inches of snow in a year.  I've seen it snow on the 4th of July in Leadville.  So, living in the mountains of Colorado meant that it was essential to learn to drive in the snow.

When I was in college, my father was once driving me home on roads that were snow packed and icy.  With no other cars in sight, he stopped the car on a patch of black ice.  He then told me to get out of the car, walk to the driver's side, bend down and touch the ice, and then take over as driver.  He wanted me to see just how slick the black ice was.  He wanted me to remember that I should expect black ice when I was driving in winter conditions.  He also taught me how to navigate mountain passes in snow by using my gear shift to slow the vehicle down.  He insisted that I learn to drive down a mountain pass without using my brakes.  His words of advice about never relying on my brakes when driving in the mountains still ring in my head when I drive mountain passes.  I think his advice has saved my life a few times when I have driven over what seemed to be totally impassable snow covered roads.

A few years ago, my husband and I were caught in a terrible snowstorm on Monarch Pass.  When we started up the pass, we knew a storm was on the way, but I hoped we could get over the mountain before the thrust of the storm hit the hardest.  I insisted on driving since my husband does not drive in the snow.  Unfortunately, we were caught in the worst of it.  As we ascended the pass, the thick driving snow made it nearly impossible to see more than a few feet ahead of us.  The storm hit fast and hard.  Soon, I was forging my own path through the snow.  Beneath the thick blanket of snow, the road was covered with ice which made the travel even more treacherous.  Trucks and cars were sliding backwards as they tried to climb the mountain.  I shifted the automatic transmission into low gear and keep on going.  I loved my trusty Subaru that day.

My husband sat beside me wringing his hands.  Occasionally, he would make a sound that would startle me.  With my heart racing from all the adrenaline I had running through my system, I turned to him and said, "Stop making me nervous.  Don't say a thing.  Don't make sound.  Just shut-up and let me drive."  I wasn't very nice, but I needed all my concentration on the road with no interruptions from my passenger.

Finally, we got to the top of the pass.  The snow was at least two feet deep in places, and the wind was blowing.  It was hard to find the road.  I pulled off to where I knew a parking lot should be and stopped the car and rolled down the window.   My husband asked what I was doing.  I said, "I am cooling down and calling up my courage so I can drive us down the other side of the mountain."  In someways, I felt more confident going down the mountain than I had been while going up the mountain.  Going up, the sheer cliffs on the side of the road seemed very scary when I saw the cars around me sliding backwards.  Going down, I felt I would have more control over my traction and speed by using my gear system.  Whispering a little thank you to my Daddy, who had passed away a few years earlier, and who had taught me how to drive in snow and in the mountains, I pulled out onto the highway and headed down the mountain.

We made it home safe and sound.  I made a promise that day to myself.  I promised myself that I would never again knowingly put myself in the position of driving over a mountain pass in the snow.  I had done so for over forty years as I traveled back and forth over the Continental Divide to be with either my parents or my children during the holidays.  I made up my mind that I was getting to old to do this kind of driving anymore.

Unfortunately, I haven't kept that promise.  There was a trip to Utah in a snowstorm across Wyoming a few years back that made me wonder if I had lost my mind for heading out when a storm was on the way.  We made to our destination that time also.  I wondered if we would at one point as we slid sideways across an icy bridge in Rock Springs, Wyoming.  As I began the drive across the bridge, I realized too late I was driving too fast.  It was covered with black ice.  (I forgot my father's teaching for a moment.)  Other cars were sliding all around me.  The bridge began to look like a bumper car area. 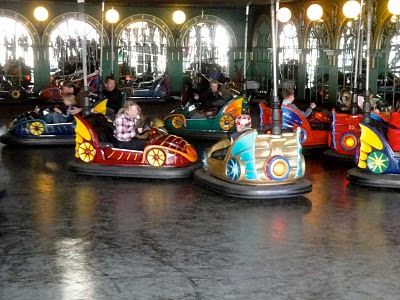 There was nothing I could do but slide along in the car and hope we didn't get hit, didn't hit the side of the bridge, and that I didn't somehow roll the car on its top or side.  Cars on either side of me seemed to just move out of my way as I slid out of control.  To this day, I have no idea how the car came to a stop, but it did stop just before it would have hit the bridge.  I was able to again head the vehicle in the right direction, and drive off the bridge in one piece.  Perhaps it was an answer to the prayer I screamed out asking that angels surround us and protect us.  I'm pretty sure it was an answer to one of those "foxhole" prayers that I shot up.

So, today, it has been good to sit in my nice warm house and not venture out when the snow flies.  As I said, I am grateful for retirement.  While I know how to drive in wintery conditions, it would take an emergency for me actually take to the roads and travel out of town when the weather gets snowy and icy.  I had to laugh when I saw this quote by  Kelly Armstrong regarding winter:

“It reminded me of what Dad said after every snail’s crawl home from
Albany when snow hit.“It’s New York, people. It’s winter. We get snow. If you aren’t prepared
to deal with it, move to Miami.” ~ Kelley Armstrong, Dangerous

I'm not moving to Miami.  I'm not even moving to Phoenix even though at times I would like to.  Instead, I will stay where I am: inside.  It is nice to be an armchair expert on being prepared for winter at this stage in my life.  Tomorrow, if it remains snowy and icy, I plan on doing much of what I did today:  read, write, cook a tasty beef stew, bake cookies, and give thanks for a husband who braves the snow and takes the dog out for a walk.
Posted by Sally Wessely at 11:54 PM 26 comments: