The Gift of Friendship

Birthdays and gifts go hand in hand.  I've been questioning how one should celebrate the birthday of one no longer with us as my daughter Julie's birthday has approached.  Julie had a gift when it came to making friends.  After her death, one of the most wonderful gifts that she left me was the gift of friendship with her many friends.  Tomorrow, April 8,  Julie would have been 39 years old.  Today, I will celebrate the gift of friendship that was found in one very close to her:  Scott.

When Jim and I were in Florida in February, I received a text from  Julie's high school boyfriend Scott Roberts asking if we would be able to connect while we were in the area since he lived an hour or so away.  I was thrilled when he contacted me, and we made a visit with Scott one of our highest priorities.

My daughter Julie met Scott not long after she moved to Pueblo Colorado, when I married Julie's step-father Jim.  I always admired the way Julie jumped right into the challenge of moving to a new town when she was in high school.  I know this was no easy task.  It wasn't long before she made a bevy of wonderful friends.  Scott was one of them.  After Julie's death Scott sent me note he had written to Julie on nineteenth anniversary of the first day they met.  He wrote: you were so cute, so happy, so full of life.  I loved you instantly...  This will be the first year I don't get to call you and tell you how long we've known each other.  We always made jokes on how we could have tolerated each other so long... There was always something special about you, I couldn't tell you the day I met anyone else...that's how much you've always stood out.

The relationship between these two lasted as long as Julie lived.  They had some pretty rocky teenage times when much to my dismay they would have their spats.  I would hear the telephone ring all hours of the night when Scott would call Julie.  (Probably because she called him first.)  More than once, I heard the little tiny pebbles hit Julie's bedroom window.  I knew Scott was trying to get her attention either late at night or early in the morning when he was delivering his newspapers.  I would go to the bedroom next to Julie's, open the window and holler down to the young man standing below her second story window, "Go home Scott.  Julie is sleeping.  Leave her alone."  We laugh about it now.

Scott and Julie attend their junior prom together.  They continued to date off and on during their freshman year in college. Scott was born three days before Julie on April 5, so every year, even the year Julie died in 2010, they always made sure they talked to each other on their birthdays. 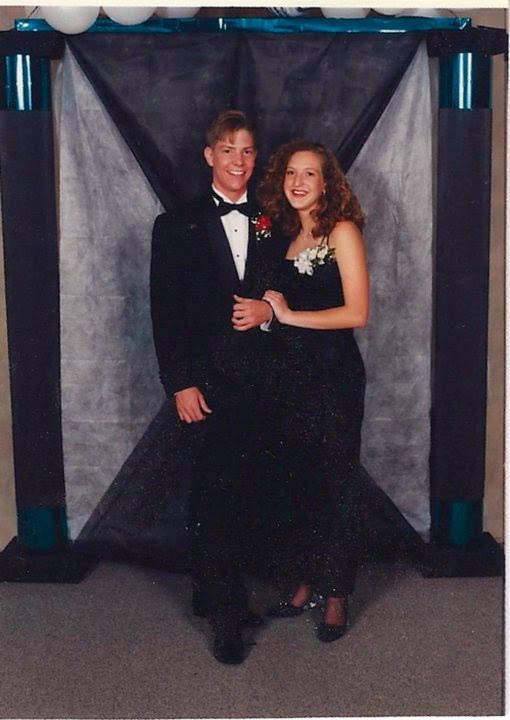 When Julie and Scott were in their first year of college, they took a road trip to Utah with my son Jon to visit Julie and Jon's father, sister, and brother in Utah.  I think it must have been over Spring Break.
I recently ran across photos taken just before that trip.  Scott reminded me that he lost his job because he went on that trip with Julie.  I guess he'd just been hired on a new job at the newspaper, but decided to take a vacation anyway.  When he got back, he didn't have a job.

They all look so young and cute in these photos.  I think Julie must have the face to her tape recorder in her hand in the photo on the right.  I think she has a police detector radar device in her hand in the center photo.  I guess they must have had dinner at our home just before they departed for the trip.  I'm thankful for these fun memories.  I wonder if they were celebrating their 19th birthdays with this trip.  The trip was taken twenty years ago in 1995.  It seems impossible that many years have passes since these kids were teenagers.

I used to tease Scott whenever I saw him over the years by asking, "When are you finally going to marry my daughter?"  All those years ago, when these two teenagers were making each other and their parents crazy, I recognized the positive character traits of loyalty, faithfulness to friends and family, hard work, and belief in his religion in Scott.  I saw a young man I would have felt proud to have as a family member.  Scott has remained a dear "adopted" part of our family.

Upon hearing of Julie's death in May of 2010, Scott flew to Colorado from Florida to be with us and all of her dear friends for her funeral.  His presence meant so much to us.  Later that same year, he came to visit us and spent some time with Jim and me on our back deck.  I always remember him asking me as we walked through the house towards the deck, "Is the trampoline still there?"  Of course it was.  He said he hoped to see the trampoline where he and Julie had had so much fun when they were younger.  He sent a beautiful letter to be read at her memorial service that was held a year after her death when we buried her cremated remains at the cemetery.

The way Scott has honored Julie's memory has always touched me more than he will ever know.  This past summer Scott made a very quick trip to Colorado from Florida for his 20th class reunion.  It also would have also been Julie's 20th class reunion.  He was in Colorado for fewer than 24 hours, yet he made sure he found out where Julie was buried so he could visit her grave and leave some flowers.  After he visited her burial site, before he headed forty miles south for the reunion, he sent me a message saying her stone was beautiful.  His thoughtfulness brought tears to my eyes.  I know Julie would have been greatly touched by his gesture of remembrance.  How many of us have a friend like Scott?  I've said it many times that Julie had a gift for making great friends.  Scott was one them.

We had arranged to meet Scott and his wife and daughter early in the afternoon on Valentine's Day for a late lunch on Daytona Beach.  This was not a day to spend a lot of time on the beach because the weather was quite cool.  Blistery winds whipped the waves of the ocean as Scott, Jim, I caught up on our lives.  Scott had brought his beautiful wife and daughter with him.  His two year old daughter, full of personality and spunk wanted to be outside running on the beach while we stayed inside the great spot Scott had picked for lunch, Racing's North Turn Beach Bar and Grille.


While Scott was attending the University of Colorado working on his engineering degree, he took up skydiving.  He has been involved in competitive canopy piloting since 2002.  His passion for skydiving has led him to create his company called Fluid Wings.  (Click to read about his company.)  He makes parachutes for a living.  He also does contract work in engineering.

Scott and I recounted what a crazy small world this is as we talked about my blogging friend and fellow Vashonista, Djan Stewart of DJan-ity and Eye on the Edge.  Scott had seen Djan's name on one of my blog posts.  Scott knew that there is only one Djan.  And of course he is right.

Djan was the person that certified Scott as a sky jumper while he was still a student at CU in Boulder, Colorado.  Isn't that just crazy?  He spoke of how much he learned about skydiving from Djan.  Then, he told me about Djan's husband, "Smart Guy."  He had great admiration for both of these people whom influence him so much in his younger years.  He said, "I learned to skydive from Djan, but I'm still alive because of "Smart Guy."  I asked why, and he told me that Djan's husband taught him about being wise and not so crazy as a youth.  He taught him not to take stupid risks.  He made him think.

Scott then told me that Djan had met Julie, "She just doesn't remember it." He said Julie was dating a friend of Scott's when Scott was skydiving and they went skydiving together and Djan was there when they all took their jumps.  That really warmed my heart to see the connection that I made with Djan after Julie died.  Djan, Scott's mentor, helped me in so many ways to cope with Julie's death through blogging.  Yes, it is a very small world.

Our time together was too short, but I left the lunch we had together feeling so blessed.  I loved talking to Scott again and was so pleased to observe what a wonderful human being he remains.  I was especially blessed to get to know his wife.  She was delightful and so very interesting.  I also was thrilled to finally meet Scott's daughter.  Words can't describe this child's bright, lively, and intelligent personality.  I think she will keep Scott on her toes when she becomes a teenager.

My life has truly been blessed by knowing and spending time with Julie's friends.  She truly had a gift for making friends.  She made good life long friends.  Her friends are among my great gifts now.

This year, as I celebrate the birth of Julie, I am also celebrating that other April baby born just days before Julie was born: Scott Roberts. Memories of Julie's teen years and beyond will always be intertwined with memories of Scott.  Scott, you will never know how much it has meant to me that you made a great sacrifice to be with us when Julie died.  You will never know how much it meant to me that you made sure you left flowers for Julie on her gravesite when you came back for your class reunion. You two were friends with a friendship that spanned the years.  Now, it is my great joy to see you happily married, the father of a beautiful daughter, and involved in a career that represents your passion.  Julie would be so happy for you.  I am so very proud to count you among the gifts that Julie's life bestowed upon me.