Name It. Sit With It. Grieve It.

Name it.
Sit with it.
Grieve it.

Yesterday these wise words were spoken to me by one who has helped me on my journey through grief.  Knowing that today marked the fourth anniversary of my daughter's death, these words were spoken to me after this wise woman inquired how I was doing on what she knew was a very difficult holiday weekend for me.
"I've been so busy living, and celebrating life's happy milestones this past month that I've actually been doing quite well." I replied.
I then related how I had resolved that I would not let grief interfere with living this spring.
I resolved that I would fully and mindfully participate in the many life celebrations occurring in our family during the month of May.
And so,
I've been doing that.
I've been so busy living, loving, and spending time
with my children and grandchildren that I've not even taken time to blog,
write in my journal, or keep up with friends for lunch or coffee.
Yes, I've been celebrating
the living,
and life.

To my friend, I acknowledged that from the Friday night of Memorial Day Weekend
until
May 29th,
I'm never fully sure of what day it is.
She said, "If those feelings of loss come, remember:
to name them,
sit with them,
grieve them.

Grieving is such hard work.
After all these years, sometimes I just want a break from processing feelings.
I resolved that I would "grieve well" after the death of my daughter four years ago today.
It seems strange and really quite unacceptable to resolve to grieve well,
and yet, that is what I resolved to do.
Why?
Was the resolution one of self preservation?
Was it made because I had read somewhere that this is what one must do after great loss
in order to heal?
Was it because I resolved not to go into denial about a loss that threatened to level me?
Was it because I knew of no other way to honor the gift my daughter had been to me then to fully acknowledge her death and embrace the memories I have of her as I embrace the pain of losing her?  Embracing the pain allows for the letting go of what no longer is.

Thankfully, my daughter Keicha came to spend this week with me. We've had such fun.We've had very special mother/daughter times this week.Yesterday, she went to spend the day with her sister Amy and with Julie's boyfriend Jason.

Before I was out of bed today, I had a text from Keicha.  She was at Jason's house spending some time with Phoenix.  Phoenix is Julie's dog.  Phoenix lives with Jason.  Keicha said in her text that Phoenix is so old and so skinny that it makes her cry.  I asked for a photo.  The photo came via text.  That is when the tears started.  They flowed all morning.  I thought I wouldn't cry today.  I thought it would just be another special day with my daughter Keicha, but I was crying.  Why?

Name it:  Phoenix, the rambucous pup, the alpha dog that always overpowered our dog Buster, is now barely able to get up.  He is getting old.  He is one of the last tangible reminders of days with Julie that belong uniquely with Julie.  Julie loved Phoenix.  She got him as a pup, and he was always a handful for her.  He was also an expense because he had ACL problems and hip problems and at one time she almost lost him to an episode of twisted stomach.  Phoenix is the one who was by her side when she left us.  Phoenix was her loyal companion.  She never married.  She never had children.  She had Phoenix.  Seeing how much Phoenix has aged since Julie died reminds me how much time has gone by since she was with us.  Seeing a photo of Phoenix just brings up way too many memories of Julie to not make me cry.  Julie is now ageless.  She belongs to the ages. In our memories, she remains 34 years old. Phoenix was left behind to age and grow old just as the rest of us were.

*These two photos above, were among the last I ever took of Julie.  I took them the last time I saw her alive.

Sit with it:  I've learned from many sources that while many may think that people who are suffering great loss may think that they must just push through it and carry on, in reality, it is really necessary to  take time to sit with one's grief in order to heal.  Some call this "soul work."  One must be willing to mentally and spiritually visit some dark, lonely, and confusing places that threaten to overwhelm the emotions when sitting with grief and letting it wash over one's physical and spiritual being.  One must trust that healing will come.  Some fear that if they start crying, they might never be able to stop.  In reality, no one ever cried forever and ever.  I sometimes suddenly find myself sobbing over a remembrance, but once I've expressed the emotion I am feeling, I am ready to move on with my day.  I feel better.  I am grateful for the memory that brought the acknowledgement of the treasure I have lost.  I am then able to see other blessings that surround me.

Grieve it:  Julie was one of the great treasure of my life.  Losing her brought what C.S. Lewis and others have called "the dark night of the soul."  It is in the dark night that one learns that one truly has a soul.  In this dark night of the soul, I discovered more truth about life, and love, and faith than I learned in any other experience.  I am grateful for others who have also grieved deeply who have shown me the way to walk through this valley.  I learned I must deal with my grief or it would deal with me.

And so today, I've taken the time to let grief wash over me.  I've also celebrated the life that was given to me for 34 short years.  I hold Julie's memory in a special place in my heart.  I grieve her, my sweet Jules.  It was her strong, beautiful, intelligent, funny, spirit that once brought such great joy and richness to my life. Her depression and illness also brought me great worry and pain.  I grieve over the pain that she suffered in her life.  I wish she could have known healing and peace in this life.

In my stillness today, I allow grief to wash over me.  I would never deny my soul the need to grieve the loss of the treasure that was my beautiful Julie. 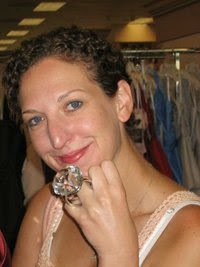