The Passing of the Family Patriarch

Just past midnight I received a text from my daughter Keicha telling me her paternal grandfather had passed away. I'm so grateful I had the opportunity to spend some time with him this fall.  He was a dear and special man in my life.

On February 14, 1966, I went to work at the Internal Revenue Service in Ogden, Utah.  On that same day, another young man also started working at this same place.  We met two days later, and it was clear that we were quite taken by each other.  We would marry six months later.

My dear in-laws were our only attendants when my former husband and I married.  I loved these two people as if they were my very own parents.  They always treated me as if I were their daughter.  I could never have picked finer in-laws.  Now, both of them are gone. 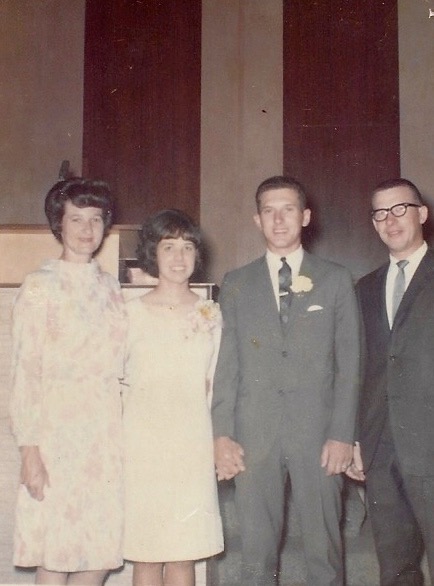 Dad, as I called my father-in-law, worked at IRS during the night shift.  After I was married, and when I was pregnant with my first child, Dad and I would often eat our dinner together at work.  He always checked in on me during break to see how I was doing.  Once, someone asked me who the man was I kept talking to at work.  "I even see you eating lunch with him," the person noted.  I said, "Oh, that is my father-in-law."  The person responded on how young he looked and remarked that they could not believe he was really just my father-in-law.

He was a young and good looking man in those days.  He was only twenty years or so older than I, but he was very fit and active, so I guess I can understand how people questioned who he really was.  Dad was a river runner, a fisherman, a gardener, and had been quite a skier back in his day.

Unfortunately, the marriage between my first husband and myself did not last, but my respect for and love for his parents never diminished.  Over the years, they both always treated me with great love and respect also, and I always looked forward to seeing them when I was in Utah, or on the few occasions when they came to Colorado to visit.  This past fall,  I am so grateful I had the see my dear father-in-law one last time.  Below is an account of the occasion: 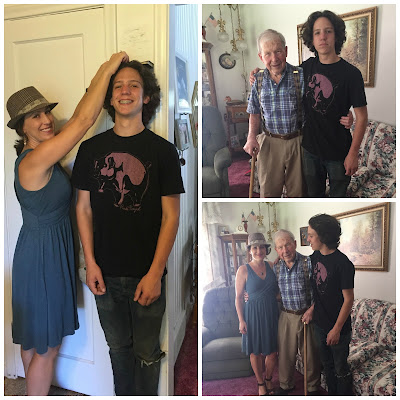 I think we all have places that have become central to us when we look back on our lives.  Certainly the home of my former in-laws is one of those places for me.  It was in this home where I first got to know my former husband and his family.  Fifty years ago last month, I left this house to walk across the street to the church on the corner to marry my former husband and father of my children.

Nearly every Sunday afternoon or evening during the years my family was young when I lived in Utah, we would visit Grandma and Grandpa at their home.  Often we were treated with homemade raspberry ice cream made by Grandpa.  The raspberries came from his garden.   His garden kept his grown family and probably half of the neighborhood in fresh produce throughout the summer for as long as I can remember.  How I loved those fresh tomatoes from his garden.  Often, my lunch consisted of just garden fresh tomatoes from Grandpa.

The backyard was the gathering place for so many summer evening picnics to celebrate a birthday, a baby shower, or Father's Day. I asked Grandpa how his garden was doing, and he said he only had a few tomato plants that had not done well this year, oh, and of course there were the raspberries.  And, there had been some good peaches earlier, he said.

Hoping to find some raspberries, Bridger and I headed to the backyard.  We were in luck.  There were a few delicious ripe raspberries waiting to be picked and eaten. 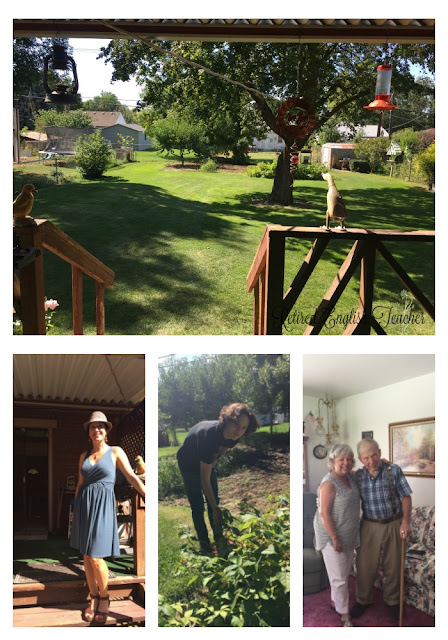 Keicha came out to see what we were doing.  As she stood on the stairs of the deck memories of the day she walked down those stairs on her wedding day to be married in this very yard also came flooding back.

My former father-in-law, now in his early 90's,  is a bit stooped over, and he said he can't hear or see "too good," but his voice was strong as he asked for all of the the children and grandchildren, my husband, and for my mother.  He told about a book he was reading.  He reminisced  a bit about the days he was a pilot for Bridger.  His once youthful, handsome face now seemed as if it had been refined by the years he has lived.  He has always been such a kind and good man to me.  Always.  I kissed him on the cheek when we left and told him I loved him.  He remains "Dad" to me.  It was hard to visit him and know that "Mother" is no longer there with him.  I'm so grateful to have had this short visit with him.

It is hard to imagine life without Grandpa Chris in it.  I will forever be grateful that he was a part of my life.  I am also grateful that he was such a great grandfather to my children and grandchildren.  All of them adored him.  I was blessed when I married into his family, and he continued to be a blessing to the generations that were added to his family.  We all will miss him terribly.  He was one of the greatest generation, and he was one of the finest examples of devotion to home, family, church, and country that his generation produced.  My heart is so very sad to see him pass to the next life, but I am grateful to know he no longer suffering and in pain.  My heartfelt condolences go out to his children and grandchildren.  God bless you all.
Posted by Sally Wessely at 5:36 PM 14 comments: