Good news is always good news.  I am so grateful to have good news to report.
Morning came early the day of surgery.  I'm just not an early morning person, but I had an appointment to make, so around 5:00 a.m. I rolled out of bed at the Springhill Suites across the street from the hospital and got myself ready for my big day.

The air felt crisp and cool as I gazed a the beautiful front range of the Rocky Mountains as we walked to the car.  Reflective thoughts soothed me as I gazed at towering outlines of mountains against a sky just beginning to lighten in the dawn of day.  The verses I meditated on before bed entered my heart:  I will lift my eyes until the hills, from whence cometh my help.  My help cometh from The Lord, which made heaven and earth. (Psalm 121:1-2)  That Psalm, my Psalm, always calms my heart and reminds me I am in God's hands.  The Lord shall preserve thy going out and thy coming in from this time forth, and even for evermore.

Once we entered the hospital, there were moments of anxiety when I wanted to say,  "I've changed my mind.  I'm not doing this."  Did you ever feel that way before a medical procedure?  Thankfully, I was surrounded by a wonderful team of doctors and anesthesiologists.  This kept my fears at bay even when I entered the surgical room.  Talk about an intimidating place!  It was huge and full of all kinds of equipment and machines and people.  I barely could see the skinny little bed where I would lie as the procedure was performed.

Once I'd entered the surgical room, and just prior to the surgery, several ice cold, large disc shaped patches were attached to my back and front.  I had been warned that I was going into a very cold room where very cold patches would be placed on me.  I asked if we could take pictures and just use this experience as my ice bucket challenge.  These discs or magnets are actually defibrillators and magnets that allow for 3-D pictures of my heart.

This catheterization, was not, as the saying goes,  my first rodeo.  I'd had a heart catheterization a year ago.  This most recent one was much more intense to me, but I was told the other procedure was actually more tricky because of the side of the heart that is catherized for an artery study.  The procedure that I had on Friday was an electrical study.

The surgery itself ended up lasting four hours.  I think my dear husband was beside himself with worry.  I was out cold for it all since I was given propofol. Or, if I were awake, I have absolutely no memory of anything, thank heavens.  The doctor had to perform a heart ablation.   This ablation should have destroyed those places in my heart that were causing arrhythmias.  During the study, I did go into atrial fibrillation (aFib) with my heart beating 200 beats a minute.  The doctors were unable to slow down the rapid beat with medication while I was in surgery, so they had to shock my heart back into rhythm using those discs that been attached to my body prior to surgery.  I'd say it is handy to have a defibrillator attached to your body!

Because the procedure was done by a catheter being fed up to my heart via an entrance in the groin, I had to lie flat on my back another four hours after surgery.  I was constantly monitored so I wouldn't cross my legs or try to bend them, or attempt to get up.  I had exceptional care during the entire time I was in the hospital.  There are only three patients for every nurse on the cardiac recovery unit.    I felt very safe and cared for.

The doctor put me on a diabetic diet while I was in the hospital.  Smart move on his part, and actually, the food I had while I was there was exceptional.  For lunch just before I left to go home, I had crab cakes, delicious crab cakes, arranged on a bed of romaine lettuce, and served with fresh asparagus spears grilled to perfection, and fresh steamed spinach.  I was even allowed one half of a slice of carrot cake.  It was all very good tasting and quite satisfying. 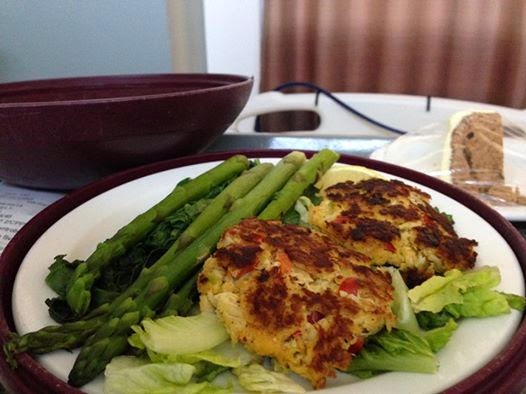 I'm so very grateful to have this procedure behind me.  For years, my doctor has discussed the possibility of doing such a procedure, but she never felt the time had come when I needed it.  I was referred to Dr. X. by way of my wonderful G.I. doctor at National Jewish.  (She referred me to a NJH cardiologist.  He went through my records.  During a consultation with the NJH cardiologist, he said I needed to go the University of Colorado Hospital to their electrophysiology doctors and even made sure I saw Dr. X.)  There were actually two doctors of cardiac electrophysiology who attended me during my surgery, and neither one expected to find what they did once they were able to do the electrical study of my heart.  The problems just were not showing up on the holter monitors that I have worn so often.

I look forward to again being able to walk at longer distances, hike up some hills, and just live life without episodes of tachycardia (rapid heart beat) stopping me in my tracks.  I hope to no longer be bothered by constant palpitations.  I hope to have fewer dizzy spells.  I think my quality of life just got better, much better.  I am so grateful.

Thank you to all of you that sent me good wishes.  Soon, I will be back to being able to exercise and walk.  The next battle is with the weight I've put on.  Along with that battle, I'll be battling pre-diabetes.  Onward and upward…

**I am not a medical doctor, and I have limited understanding of all that took place during my surgery.  It has been explained to me.  One doctor even drew a picture for me.  My knowledge and understanding of the procedure remains quite limited.  I've only conveyed to you what I understand.  I'm sure there were wonderful technical things done of which I have no knowledge.  Thankfully, I can leave all that knowledge to my doctors while I remain the one who benefited from their education, skill, and expertise.
Posted by Sally Wessely at 8:44 PM 27 comments: