From One Shoebox to Another

A Review of the iPhone App Shoebox


Some background on the app:


In my last posting, I made reference to Shoebox and 1000 Memories.  One of my blogging friends,  Rosaria  from sixtyfivewhatnow asked me about the app I used to download the large family portrait I included in the blog post.

For those of you who may not know about Shoebox and 1000 Memories, I thought it would be fun to share what I have been doing with this app.   My daughter Keicha, who blogs at o-townramblings,  first told me about this app a few weeks ago.  This post will not give technical information about the app because I am not very good at giving technical information.  If you need technical information, go to 1000memories.com.  If that doesn't work for you,  just download the Shoebox app onto your iPhone, and I'm sure you will be walked through the process.  Thankfully, my daughter walked me through the process, and then, unfortunately,  I forgot it all.

The concept behind the idea of Shoebox and 1000 Memories is the brain child of Rudy Adler and Brett Huneycutt.  Their goal is to "turn the world's smartphones into tools to digitalize the estimated 1.8 trillion fading and yellowing snapshots that people have lying around in their attics, garages and picture albums..."  Isn't that an awesome idea?  I  didn't know anything about the creators of this app or the genius of their idea until after I had actually downloaded the app and started using it.  I then read about the app in yesterday's Denver Post.  (Click to read the article.)

I guess Mark Zuckerberg also thought this app was cool because now he and Facebook have joined forces with 1000 Memories in order to allow users to add the photos from their newly digitalized photos to their timelines on Facebook.  I haven't quite gotten that far yet.  None of my photos are on Facebook, but I hope to share them with family using that format soon.


I had the perfect opportunity to practice using this new app this past weekend when some of my cousins, an aunt, and I gathered at the home of an aunt who passed away a few years ago.  The home still contained many family mementos, and my cousin wanted us to come by and take what we might want so she could get the house ready to rent.

One of the treasures we found was this large framed portrait of my grandfather.  My aunt said she would like to take the portrait of her father home with her.  As we stood admiring the portrait some of us had never seen before, I suddenly remembered I had Shoebox on my phone.

We discovered my grandfather's handwriting on the back of the portrait.  He had recorded when and where the portrait was taken.  He also noted that it was taken in his uncle's studio by his uncle.  I was able to also scan this handwritten documentation using my smartphone with the Shoebox app.

As we went through dishes, glassware, and such, I discovered a shoebox full of old photos.  I took just a handful and scanned them.  Here is a sampling:

This photo was taken in my grandparent's backyard when my father came home from the service in January of 1946.  My father is holding me, and my brother is standing at his side.  I have a photo that is similar to this that includes my mother, but had never seen this particular photo.  I love this photo because it records the first time my father spent any time with me as an infant because he was drafted into the army on the day I was born. 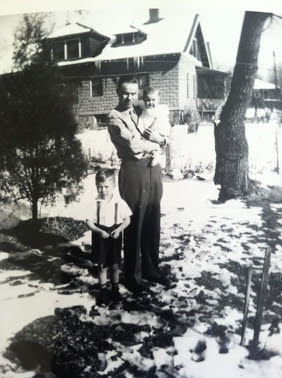 This priceless treasure was taken the same day.  My father is shown in this photo with his two brothers who were also home on leave.  My Uncle Charles was a paratrooper, and my Uncle Bob was in the Marines.  As I understand it, Christmas was celebrated on the day the photos were taken because the family waited for the boys to come home before having Christmas.  My grandmother recorded the date on the back of the photo as January 20th, 1946.
This photo was bit of a challenge because it is in color.  I found that by placing the photo on a white paper, I could scan it more easily.  This photo was also taken in my grandparent's backyard, and it is of my brother.  I would guess he is about two years old. 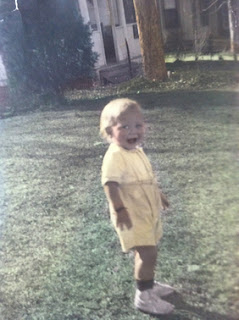 This portrait of my mother sits in a frame in my office.  I did not remove the photo from the frame because I was experimenting.  As you can see, it is difficult to get the edges straight by holding the phone and scanning if one does not place the photo on a flat surface.  I can crop this using the app, but included it so you could see that some of the scanning takes some time and proper placement of the item being scanned.

I love this portrait of my beautiful mother.  She had this taken while my father was away in the army so he would have a picture of her to carry with him.  This same portrait was on a dresser in my parent's bedroom when I was child.  I remember studying it once when I must have been about five years old.  I was struck by my mother's great beauty.  I ran in the kitchen and looked at her and said, "Mama, did you know you were pretty?" 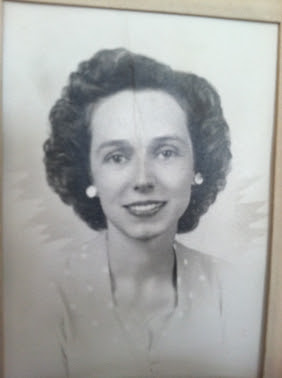 This photo of my sister and me was taken by a neighbor who was learning how to take portraits.  He posed us in front of his living room window after he positioned a hose on window.  He wanted to create a scene that appeared as if two children looking outdoors on a rainy day.  He entered a large portrait of this exact pose in a contest and won first prize.  For a number of years, this portrait of the two of us hung in the Fine Arts Center of Colorado Springs.

I was able to scan this from a 8 X 10 framed copy that I now have in my study by placing the photo on a flat surface and scanning it with my iPhone.
Finally, I am sharing the first scan I took using Shoebox.  This photo was one of the poses of my daughter Julie taken for her senior picture.  I love this photo of Julie because it captures her smile, her eyes, and her hair so well. 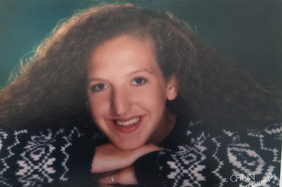 Not long after her death, I was reframing the photo and decided to trim the sides to fit it into the frame better.  I'd forgotten she had written on the back of it.  I was devastated to think I had destroyed part of the message she had written on the back.  With Shoebox, I was able to easily scan her handwritten message so it would be saved with her photo for others to see. 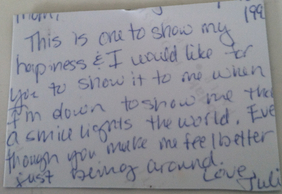 She wrote:
Mom,
This is one to show my hapiness & I would like for
you to show it to me when I'm down to show me
a smile lights the world.  Even though
you make me feel better just being around.
Love,
Julie
Yes, the photos are "often among the most prized, and least seen of people's possessions."  I love having a way to save and share these treasures in a format that also allow one to tell the story behind the pictures.
Posted by Sally Wessely at 8:48 PM 27 comments: