Well, the big day is finally here. I hope you all get out there and vote. I have been thinking a lot about our family and its involvement in politics.

My earliest memory of things political involves a visit to see President Harry S. Truman when he came to Colorado Springs by train in October of 1952.  He was actually on a Whistle Stop Campaign for Adlai Stevenson.  The photo below was taken in Colorado Springs, Colorado on that very day when I had the exciting opportunity to view the first President of the United States that I remember.  I was only seven years old when I had this introduction to political campaigning. 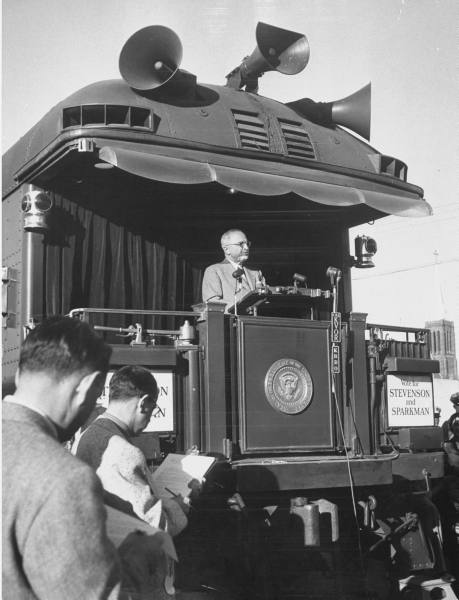 My parents took us to the train depot that day and stressed how we were not only fortunate to see the former president, but also they wanted us to see history in the making.  My father always brought us up with a rich appreciation for history.  He also taught to take very seriously our responsibility to be informed voters who used our voice by participating in the political process. My paternal grandparents,  Avery and Elva French were staunch Democrats.  (They are shown in this photo from 1971.)  They always, as far as I know, voted the straight Democratic ticket, and they were very involved in local Democratic politics.  Grandma French was an active member of the Jane Jefferson Club of Colorado Springs.

We all turned out for that day in 1952 to see Harry S. Truman come into town.  I was surrounded by my parents, my siblings, my grandparents, my aunt and uncle and my cousins.  We all loved Harry.  I remember being hoisted up on my father's shoulders so I could see the President.  I still remember the excitement I felt that day.  The memory has stayed with me with great clarity these sixty years later.

Those days, politics seemed kinder and gentler.  Even so, I remember hearing tales from my grandmother of back room deals that were brokered in the game of politics.  Such things always angered her. Politics has never been a game for the faint of heart, but I find the nastiness and dishonesty or half truths that we hear today during a political campaign especially upsetting.  I also am sickened by the money that is spent on campaigns.  I think it is immoral for either party to spend the billions they do on campaigns. I will be grateful to have the current campaign behind us after tomorrow.  I do wonder if we will really hear the end of it after November 6 though.

In 2008, Jim and I went to see then candidate Barack Obama when he came through Pueblo during his campaign.  It was a very exciting day for us.  I try not to be political in this blog, but you will probably guess who my candidate was and is by the photo I am including.  I guess you could say our Democratic roots run deep.  Jim's father was a loyal supporter of Harry S. Truman, just as my grandparents were. 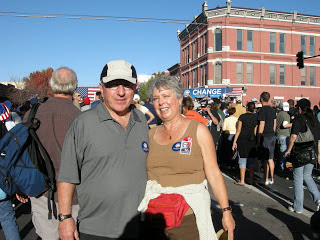 I haven't always been registered as a Democrat.  I have always had a more moderate view of politics as an adult, and for many years, I registered as an Independent.  When I was a young wife and mother who stayed at home and did not work, I did a few odd jobs to earn money. One job I had, involved working as an election judge. The precinct where we lived in Utah was Democratic. They needed Democratic election judges, so I changed my affiliation to Democratic from Independent. The first election I worked was not a presidential. It was in the early 70's and the home where we voted was in a very poor part of Ogden, Utah. The woman who had the election in her home had done so for years. She was the mother of at least 12 if not 13 children, and she must have weighed about 250 pounds. She was in her late 50's, about 5' tall, and had stark white hair. I thought she was fascinating. During the day, she told us stories about elections and raising all of her many children. She reminded me of the Old Woman Who Lived in A Shoe. This house was tiny! It had three bedrooms, a living room, a bathroom and a kitchen. It was crammed full of furniture, books, papers, junk, and people. This is where our precinct voted! Mind you, she worked hard to keep her home as a polling place because she made extra money for holding the election in her home and by working as a judge.

The other judges and I brought food for the day. There were crock pots of great chili, veggies, chips, cookies and etc. I met some great ladies working as the other judges,  and I met many interesting people who came to vote. Of course, as folks left from voting, the other judges told me all the gossip and life histories of these folks. I just wish I would have recorded the events in a journal.

Times were very different in those days.  The polling places were held in homes, not always in schools or other public places.  There was no early voting.  This year my husband and I voted by mail.  That did not happen in the 70's.

In November of 1976, on the two hundredth anniversary of our country's founding, I hosted the presidential election in my home. I finally reached my goal of earning $50 for working an election.  I made $25 for hosting the polling place and another $25 for working.  The polling place had to change in our precinct that year, and my home was selected. Our home was a bi-level, so there were complaints by those who came to vote about the site being moved from where it had been for years, and about the stairs they had to climb.

On the day before the election, my husband and I had moved much of the furniture out of the living room so that the tables for voter check-in could be set up there. Voters then could either vote in booths in the kitchen, or the booths in the basement family room, which also had been emptied of furniture.

I remember that our neighbor was one of the judges. Her ex-husband and son travel around the neighborhood with a speaker system in their truck exhorting people to get out and vote. Julie was just a baby at the time, and Amy was a toddler. 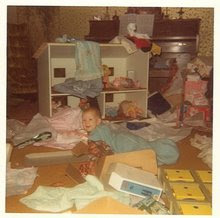 Jimmy Carter won the election. My folks were for him.  I have a letter from them to prove it.  I was not for Carter.  So, as you can see, I have not always voted the Democratic ticket.

In 1976, I used the extra money from working the election to help buy the Christmas presents that you can see in the photo of Julie on Christmas morning in 1976. This was after much of the money had to spent on cleaning the carpets. Do you have any idea how dirty gold carpet gets after a presidential election is held in your home???

I don't remember working as an election judge again after that year. Perhaps, I worked one day in North Ogden. I don't remember,but I have memories of voting in North Ogden, Utah in the home up the street during the year that Reagan was elected. We already knew he would probably be president when we voted in the evening.

This year, history will again be made in this election. Please vote. Record your memories of why you voted the way you did.  I think your children and grandchildren will be interested someday in reading about your views.  More importantly, your commitment to voting and being a part of the political process is a teaching moment.  It is not a responsibility to be taken lightly.
Posted by Sally Wessely at 10:53 AM 16 comments: