Buster Brown Jr. - What a wonderful dog you were! 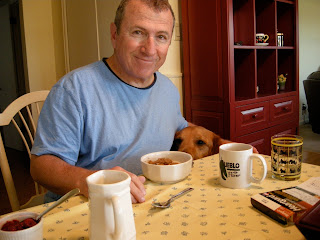 The kitchen floor is less clean these days, and the carpet no longer yields a canister full of hair after a vacuuming.  Without Buster, we are learning that he kept the area around the kitchen completely free of little crumbs that we now find must be swept up.  Yes, Buster, our beautiful golden retriever is no longer with us.  Above is a photo of Buster in his favorite spot: near the table and next to Jim.  He is no doubt waiting for a crumb from the cereal bowl to fall on the floor.

On June 1, 2010, three days after the death of my beloved daughter, Julie, Jim and I had to make the unexpected decision to put down our dog.  It all seemed surreal.  At the time, we could hardly believe what we were going through.

We knew Buster had not been himself, and he had been taken in to the vet quite a few times in the past six months, but somehow, his condition was never diagnosed.  It turns out that Buster had cancer in his lungs and in his heart.  One of the tumors in his heart burst while he was staying with Jim's daughter, Thia, in Colorado Springs.  Thia called with the news and said she was taking him to the vet.  Thankfully, they were able to diagnose his condition and give us the information we needed to make the decision that the right thing to do would be to put him down since there was nothing that could be done for him.  The vet was able to keep him alive until Jim and I could drive from the Boulder area, where we were in the midst of planning Julie's memorial service, to Colorado Springs to be by his side for his final moments.  In many ways, it was healing for me to be able to be there with him as he passed from this life to the next.  Jim and I both held and petted our beloved dog as he took his final breath of life.

Technically, Buster was my dog.  Jim gave him to me for Christmas in 1999.  He was a scrappy little puppy who immediately went to work chewing everything he could find.  I think Jim expected Buster to automatically be as perfectly behaved and wonderfully trained as Buster's predecessor Red had been.  Buster would require much training, especially since he had to cope with two  very different "parenting tactics."  I was the one who expected a very tightly controlled, well trained dog, while Jim preferred to indulge our spoiled pet.

Somehow even though Buster was a handful and a challenge at first, it became very evident early on that Buster was really Jim's dog and would become his best buddy.  I'm not sure if this photo is prophetic or not, but please note that Jim is only wearing one sock.  Do you think he had taken his sock off and Buster had grabbed it and begun his life long habit of chewing up and eating socks? 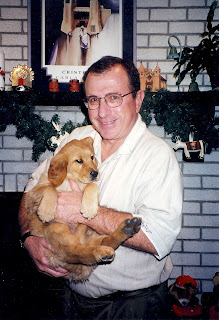 No matter what his bad habits were, like eating socks, kleenex, and chewing up the back deck so badly when he was a pup that we had to have my son Jon and his wife Samantha rebuild the deck, Buster won over the hearts of our family right from the very beginning.

Buster was born in October of 1999.  My two grandchildren, Mason and Gillian, had been born the previous October.  Buster became the childhood companion to the grandchildren when they were at Grandma Sally's house.  That is one reason why we wanted a golden retriever.  They are awesome with children.  We never had to worry about him being anything but gentle and loving around the children.

I remember when one of the grandchildren at about age two or three looked into his eyes after petting him and said, "He has real eyes."  I guess he seemed like a big stuffed animal, except that this fluffy pet was alive. 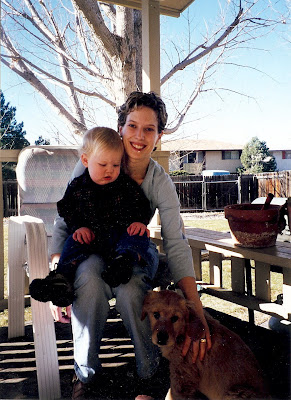 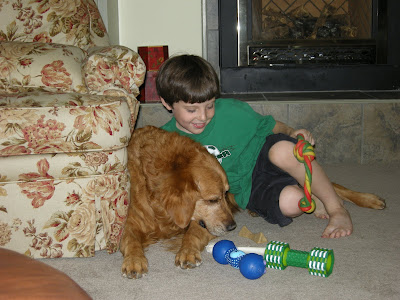 He loved the grandkids and would be so excited whenever they came to visit.  The photo above was taken just a year ago.  He still looked healthy and young as he played with Atticus. 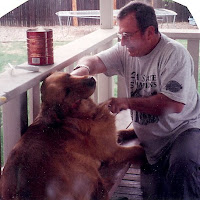 After Jim retired, Buster became his constant companion.  Buster sat at Jim feet as Jim read the morning newspaper and patiently waited for the daily walks at the river walk.  They had a routine.  Buster knew that Jim would be faithful in feeding him in the exact amounts twice a day at the same time.  Buster's weight was managed carefully even though ours was not!  Buster could count on being groomed once a week on Sunday afternoons by Jim.  He also loved his monthly visits to the professional groomer.  Believe me, this dog was treated very well.  Some might say that he was very spoiled.  Spoiled or not, Buster was the most loving dog ever, and he loved his good and kind master very much. 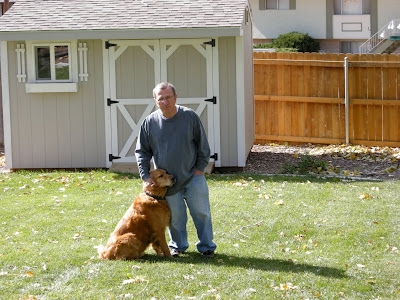 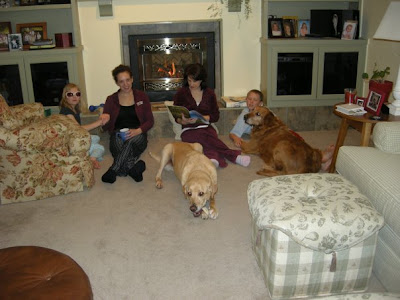 Julie's dog, Phoenix, was one of Buster's playmates from puppy days.  Phoenix, a yellow lab/golden retriever mix was a rambunctious alpha dog.  It was always a wild time when the two of them were in the yard or in the house.  Many happy times were spent by all of us with these two beautiful dogs.   This photo of Buster and Phoenix surrounded by Hannah, Julie, Keicha and Mason was taken a year ago. 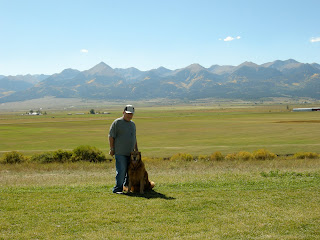 Buster's days were spent just being our loving companion.  He spent time with us on walks and trips to the mountains when we had the opportunity to get out of town.  Or, he loved to sun himself on the porch or the patio.  The yard was his domain.  That is another thing that has changed.  We now find the squirrels and the neighborhood cat have been daring to hang out in our yard.  Our guard is no longer on duty.  They feel free to run from tree to tree without being chased from our premises by our watchdog who only barked if something or someone got into the backyard. 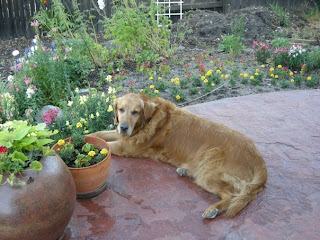 The last few months of Buster's life were most spent with Thia and her family.  He stayed with them as we went to Europe and then during the time we were out of town dealing with the aftermath of Julie's sudden and unexpected death.  We are grateful that he was with family and children in his last days.  He loved being with the kids.  Rachel and Nicole could not have been better caregivers.  They upstaged their grandpa by brushing Buster each day when they returned from school.  I love this photo of these two beautiful girls in a beautiful setting with a beautiful dog.  Thanks, Nicki and Rachel for taking such good care of Buster! 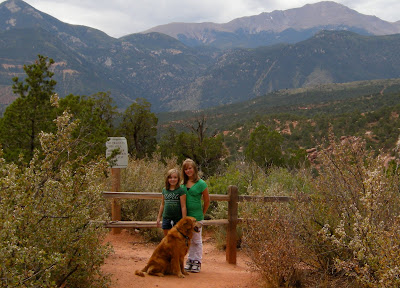 The last family gathering that included Julie, Buster, and Phoenix, who now lives with Julie's friend Jason, was held during the Easter holiday of this year.  Little did any of us know how much our lives would change in just a few short weeks.  I am so grateful that we gathered on the front lawn to take that last family snapshot together. 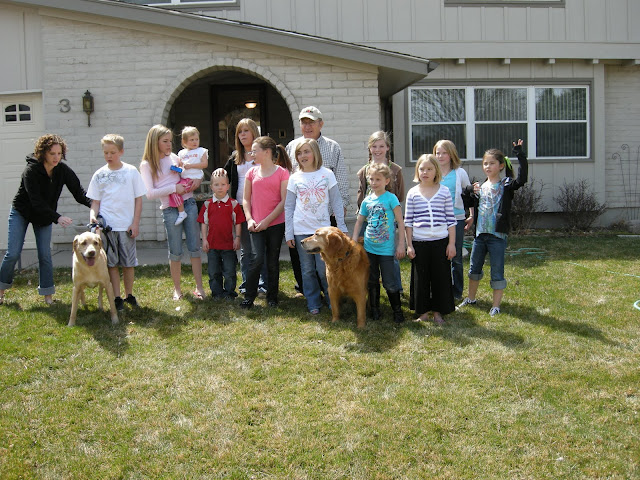 Julie is trying to get Phoenix to pose for the portrait.  Buster is paying attention to Julie.  Jim is surrounded by our wonderful family and his dog, as always, is near his side.  We all had a wonderful time that day.

Our sad good-byes would come later.  As Buster passed from this life into the next, I whispered in his ear, "Go be with Julie."  I wasn't sure of my doctrine on my last words to our beloved dog, but later, I found a quote in a book I've been reading about the great theologian Dietrich Bonhoeffer.  Bonhoeffer said, "Look, God created human beings and also animals, and I'm sure he also loves animals.  And I believe that with God it is such that all who loved each other on earth - genuinely loved each other - will remain together with God..."

Jim and I are at an end of an era.  The grandchildren are no longer babies.  We have transitioned fully into retirement.  Our loved companion is gone.  We have lost a beautiful daughter.  We do have many wonderful memories of all of our times together.  For that we are grateful. 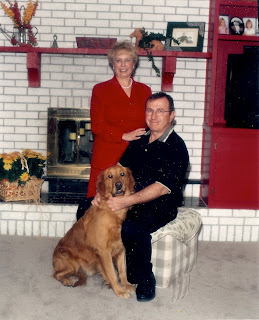 Our formal, family portrait of the three of us was taken when we were all a bit younger!