Doing What I Can to Stay Healthy

Today was a beautiful day here for those of us whom live along the foothills of the mountains of Colorado.  With temperatures in the low to mid-70's (F), folks in shorts and white legs were jogging and walking and pushing babies in strollers in every neighborhood I drove through.  These warm temperatures are great on one hand, but they also bring the danger of fire.  We have not had much moisture in the lowlands of Colorado this winter.  Right now, it feels like we are living in a tinderbox.  When I look at the snows in the eastern part of the country, I am just a bit envious of all the moisture that such storms provide.

I didn't get out to walk in the neighborhood today, but I did yesterday, and it was wonderful to out walking in such pleasant weather.


If you look closely at the landscape, you will see how dry the grasses in my neighborhood are.  Also, the trees are very dry.  I am hoping we will get some much needed moisture soon.

I am working very hard at getting healthy again after being so sick during February with a bad sinus infection and acute bronchitis.  It seems there is always a fall out when one goes on antibiotics.  I dread the questions that come when I am sick.  The doctor looks at my long list of drugs that I have reactions to or am allergic to and then asks, "What can you take?"  "Not much," is my standard reply.  I was given three different antibiotics over the past six weeks and prednisone (one day only before I had a reaction that landed me back in the doctor's office)  and now I am struggling with problems which were most likely brought on by medications and a body fighting infection. Heart arrhythmia and tachycardia (rapid heart rate) have been causing me a lot of concern of late.

I saw my cardiologist yesterday for my six month check-up after my recent "download" from the pacemaker.  Thankfully, the data from the pacemaker looked good, but that data was downloaded before I started being symptomatic again.  I am so thankful I have the most phenomenal cardiologist. He knows me well, and he knows Jim well.  He jokes with us, shares stories, talks about some place that has the best food, or just makes us feel like he enjoys visiting with us while he is also taking care of business and checking out the old ticker.  He said that the lung issues I had can trigger the heart to act up and sometimes those issues can take two months to resolve themselves.  He also said that the antibiotics can cause the problems I'm having.  He ordered blood work to check my thyroid since I have Hashimoto's disease.  He then surprised me by saying he was going to have me wear a Holter Monitor to compare its findings with my pacemaker.  I must admit that I was surprised that he is having me do this testing, but I am also relieved because the tachycardia has been quite troublesome in the past few weeks.

In the meantime, I am actually feeling quite well.  I know that sounds crazy, but I do feel good most of the time now.  I just hate having those spells with my heart.  I thought they were all behind me after the pacemaker was implanted nearly two year ago, and after I had the heart ablation.

Besides the heart problems, I am really fighting my weight.  I put on ten pounds quite quickly last year because of a medication I was taking to try and tame the chronic inflammation I have.  The weight gain caused my A1C to go up.  I am trying so hard to keep those diabetic numbers in the range of pre-diabetes.  So far, I have fought pre-diabetes successfully for about eight years.  I'm trying to limit my carbs to 30 per meal, and I am trying to walk or do some sort of exercise daily.  This has been a challenge because it was after an hour's class in water aerobics last week that I suffered a bad spell of tachycardia and arrhythmia.  The cardiologist said to keep up the exercise, but to listen to my body, make sure I stay hydrated when I exercise, and try not to overheat.

The antibiotics also stirred up GI issues.  Can I just say that I really am grateful for antibiotics, but I hate taking them!  They stir up so many problems for those of us with IBS (Irritable Bowel Syndrome) and SIBO (Small Intestine Bacteria Overgrowth). These are not by any means new problems for me.  Over the last five years or so, my digestive issues have become extreme.

A few years ago, my GI doctor handed me a list of foods to avoid.  She said, "This is the FODMAP Diet and many of my patients have found that following it has really helped them."  I looked at the list, smiled, took it home and filed it away.  Then, she asked if I was following it on my next visit.  The answer was, "No."  Being one who hates diets, when my symptoms became more and more severe, I decided to do a bit of research on the diet.  I downloaded all the materials I could find about it on my phone and bookmarked websites on my computer.  Then, finally, I decided to be brave enough to try to follow the diet.

FODMAPs are short chain carbohydrates and sugar alcohols found naturally in foods and in additives to foods.  FODMAPs is an acronym that stands for:

To know what those terms mean, read the links I am providing.  I am not about to try to explain it all because I am not scientific enough to do so!  Trust me, it makes sense once you study it, but don't ask me to explain it.

I follow a dietician from the Boston area who is an educator on the FODMAP diet.  Her website is katescarlata.com.  You can learn a lot about FODMAP from her.


I've never been 100% successful at following the diet's 21 day elimination phase faithfully,  but I have been faithful enough at following it to have identified some triggers.  When I avoid these triggers, I do well with my digestion.  When I have a flare-up of symptoms, I can be sidelined for days on end with pain.

My endocrinologist recently thanked me for telling her about the FODMAP diet.  She said she had told some of her patients about it and had seen some wonderful results.  She said it was too early for her to know if it also helped with establishing a diet that helped diabetics.

As I said, I hate diets.  I don't like restrictions in my diet, and I don't like avoiding some foods; however, when one suffers badly enough from digestive pain and problems, one becomes more open to taking the advice a doctor gives.

I am absolutely against fad diets where whole food groups are avoided.  I am also against self-diagnosis and treatment for health problems.  For that reason, I haven't written about the plan I have studied and tried to follow for the past year.  I am now taking it much more seriously and am following it more consistently.  If a food doesn't bother me, then I don't exclude it.  I have followed the plan enough to have learned most of the things I must avoid.

I snapped a photo of a recent lunch I fixed myself that is a suggested lunch on the plan.  I made a salad of mixed greens, grape tomatoes, red peppers, carrots, eggs, kale, and a dressing I made with red wine vinegar, dijon mustard (with no added garlic or onion), and chopped green onion tops.  The dressing made the salad especially good. 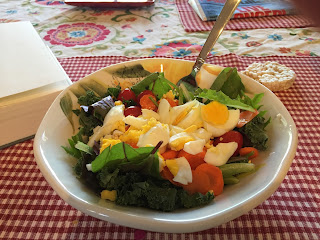 My father used to say that no one want to hear about health issues.  I have a hard time writing about health issues for that reason.  I do suffer from a number of issues that have taken years for me to sort out. It has also taken me years to find answers from professionals I trust.  Thankfully, I now have a team of doctors that give me great support and care with two of the health issues that I juggle on a daily basis.  I'm doing what I can on my end to do what I can do be healthy.