A Last Prom with My High School Sweetheart

My husband was my high school sweetheart.  Some of you may recall the post I wrote in March about our first date.  From the first time I ever met this guy, I knew he was a very special person.  His kindness, steadiness, sense of humor, leadership, and character were very apparent even when he was a young man.  I fell madly in love with him, my very first boyfriend,  when I was only sixteen years old.  I was only a sophomore in high school and he was senior back when this photo was taken.  Age didn't stop him from asking me to marry him on the day he graduated from high school.  Because he had the goal of going to college to be a teacher, he didn't plan on marriage until after college, but he wanted me to know that I was the one with whom he wanted to spend his life.

Not long after this first marriage proposal of sorts,  we were separated by family pressures, moves, and college attendance in different states.  Despite these distances and distractions, my dear high school sweetheart maintained that we were destined for each other and should get married someday.  After he finished college, when I was still in college, he came to visit me and once again proposed marriage.  I was really not interested in marrying anyone at the time.  I remember him telling me that he would get a teaching job that would pay him about $4000 a year.  That was tempting, but no, I really wasn't ready for marriage.

A few years later, I became engaged to my former husband.  I wrote Jim, my high school sweetheart, to tell him I was getting married.  At the time, we were living in the same state.  He called me and asked if he could come to see me and take me to dinner.  My fiance' didn't have a problem with that, so Jim drove from Provo, Utah to Ogden, Utah to take me to dinner three days before I married my first husband.  Jim listened to me tell him about my new guy and all about our plans.  Then, he said, "Sally, you are making a big mistake.  You are supposed to marry me.  I'm asking you again, Will you marry me?"  I told him I would always care deeply about him, but that I was not changing my plans.  I planned on marrying someone else.

Fast forward thirty years:  I had been divorced for ten years and living in Colorado Springs.  Jim, just recently divorced and living in Pueblo, called me asked me to lunch.  The years seemed to literally fall away when we first re-connected.  Within just a few months, he again asked me to marry him.  This time, I was smart enough to say, "Yes." Six months later, on June 12, 1992, we were married.

This year, exactly fifty years after our first prom date, we attended what will no doubt be our last prom together.  Serving as an administrator, after coming out of retirement for six months, at a school district near Colorado Springs, meant that my husband again had prom duty. 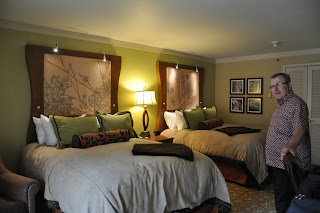 Since the prom was being held at the beautiful Cheyenne Mountain Resort in Colorado Springs, he booked us a room there.  He was even able to get a good deal on our wonderful room because he was chaperoning the prom!  The room was in Dove Lodge, which I thought was just ironic since my friend Dove introduced us so many year ago before our first prom.

The main lodge was located across the courtyard from our lodge.  Another prom was held right outside our room.  That was really quite cool. 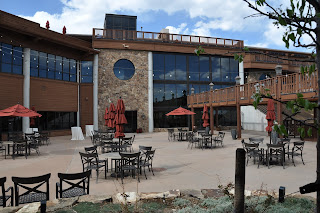 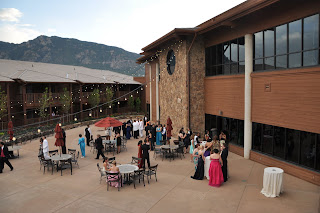 Before the prom, we had dinner together in the main lodge.  We made sure we had our picture snapped to record the momentous occasion.
After the prom, sitting on the deck outside our room, I took some time to write about the event in my journal. While writing, I turned to my husband and said, "I am one lucky lady.  Not, only am I married to the kindest, sweetest, most supportive, compassionate, and thoughtful man I know, but I am also married to someone who makes me feel sixteen again."  Last year at this time, we were on a cruise.  I told him that I would rather spend my time surrounded by youth, full of life and hope, than surrounded by old retired folks at a cruise best dress affair.  Being with teenagers has a way of keeping one engaged in life, hopeful for the future, and happy.  My heart and soul were truly uplifted that night.  Mother's Day Eve was a happy and healing time for me.  For that, I am grateful.
I am also grateful for my dear, wonderful sweetheart.  His enthusiasm for life, and for his profession, has meant that he has stayed young in spirit and positive in his outlook on life.  He believes in giving back.  He believes in mentoring others to become good educators. He believes in the youth of our nation, and he loves being involved with them.  He has made good on his life goals that he expressed to me on the night of his high school graduation:  he became a teacher, and he married me.
He has been the best husband in the world for me.  I don't know what I would do without him.   I adore him.  My children and grandchildren adore him.  I am thankful I got things right when I married him.
Jim, this song is for you.  XO
Posted by Sally Wessely at 5:51 PM 37 comments: