Observations on Then and Now

Observations and Reflections
on Then and Now
1962 vs 2012

This morning, as I stood idly at the counter of Starbucks waiting for the barista to make my de-caf, skinny cafe latte, or as one barista called my coffee choice, "a why bother," a girl dressed in a high school letter jacket and sitting in the cab of her truck waiting for her morning coffee at the drive-through window caught my eye.  Her make-up free face looked tired and a bit harried.  My first thoughts were, "She's a bit late for first period.  School has already started."  That was the teacher in me.  Then I thought how harried she looked.  It seemed to me that a girl of seventeen or eighteen just should not look as if she were the mother of three and in her 30's.  I don't remember looking that tired and overwhelmed in high school.
Coffee Shop Reflections

Suddenly, I found myself comparing my life as a teenager, a senior in high school, to what I found myself observing of a quick snapshot into this girl's life. 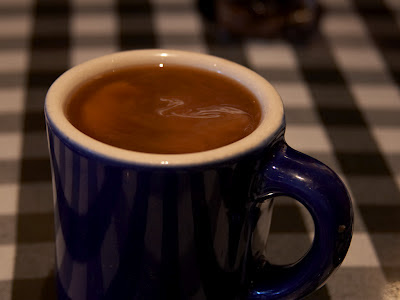 As a senior in high school, I did not stop by a coffee shop on my way to school to pick up coffee because:
Even today's visit to a coffee shop is a rare one for me.  I had some time on my hands after dropping my husband off for a medical test at a hospital near-by and thought I would settle in with my book and a cup of coffee while I waited for his call to pick him up.  After observing the girl in the truck,  I couldn't help questioning whether I would have liked to live today's teenage life, or if I preferred the life I lived as a teenager.  With my 50th high school reunion coming up this year, it only stands to reason that times have changed.

I'm thankful I came of age at the time I did.  My life was much more sheltered than the lives of so many teens today.  Since I was under my parents' roof, I was also under their rules.  These rules protected me in many ways.  I didn't have the responsibility of driving.  I didn't have to have a job during the school year.  My father thought there was plenty of time for having job responsibilities later in life.  My mother made many of my clothes, or I made my own.  I had a difficult schedule at school, but I also had plenty of time to study.  I loved to read and spent hours doing so.  I didn't have anything handed to me.  Whatever clothes I wanted beyond the basics made by my mother or purchased just before school started, I bought with the money I made as a car hop at the local A&W across the road from our home in the summer.

I had a very active social life with much time spent at Teen Town dances, attending ball games, taking jeep tours with my friends in the mountains, hiking, biking and having a lot of fun just "dragging Main' with the lucky ones who did have cars.  I was not a cheerleader; I was too clumsy for that.  I was involved in drama and acted in high school plays with lead roles.  I was elected homecoming queen.  I guess I must have been popular.

If there is one regret, it is that in those days, before Title IX, girls did not participate in sports at school.  There were no teams for girls at school.  I wish I could have had the chance to develop my skills at a sport.

The early sixties was a different time from now.  We did our research projects by using note cards, and I typed my senior paper on an old upright typewriter.  We listened to records and danced to the Loco Motion, Wipe Out, and Our Day Will Come on recorded '45's.  We watched Perry Mason, Gunsmoke, and The Ed Sullivan Show on television.

There were no coffee shops that I knew of in our town.  A memory stands out in my mind of walking to a bakery after school before play practice would begin.  We would buy the most delicious cream puffs and eat them as our after school treat.  On a Saturday, we would go to a restaurant with a group of us and order cokes and French fries and take up the booth for a very long time talking and laughing with each other.  We didn't text; we talked.  Our talks were sometimes long and quite philosophical.  We didn't facebook; we had lots of face to face time.  All I remember is that high school was a fun time in my life.   I had a chance to gain my own identity.

The summer after I graduated from high school, just before I left for college in the fall of 1963, I visited my boyfriend's home to say good-bye.  I am now married to the one who snapped this photo of me in front of his parent's home.  High school provided me with a time when I made life time friendships.  It also was a time when I met my true love and partner for the second half of my life.  I remember how proud of me Jim was because I had earned a scholarship for college tuition and was going away for college.  Dressed in my new shirtwaist dress, I thought I was the picture of a college girl.  Now I think I look terribly young and if naiveté is written across my forehead.  When this photo was taken, I had wonderful dreams and goals.  I am happy I reached all of them.  I do wish I'd had higher goals and loftier dreams.  It was a different time then.  Women didn't really think of doing much except being a wife, teacher, or nurse.  For the times, I am happy with my choices and that I accomplished what I set out to do.  I wouldn't trade the time in which I came of age for anything.  I grateful I grew up when I did. 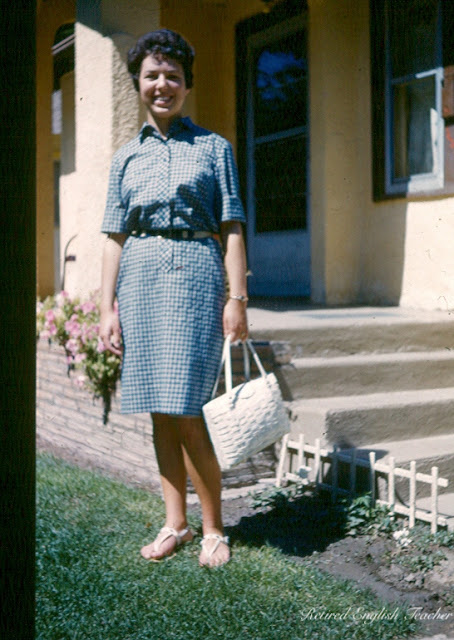