Hair ~ A Journey of Loss

Today, after consulting with one of the specialists at the University of Colorado Anschutz Medical Campus,  I made a decision that I regret not making nearly two years ago.  Now that the decision has been made, I wonder why it took me so long to make it.  I think the main reason for not making the decision was denial and fear.  I am not one to take medicines.  I resist taking medicine until I know I have no other option.

I hardly know where to begin in telling you this story about a journey I have been on that started more than ten years ago.  I've never written about this journey.  Oh, I written many a blog post in my mind, but I've committed none of these posts to writing.  I've only written about this journey in my journal and in my writing group.  Now the time has come when I am finally ready to tell you about my journey into the world of hair loss.

I don't really know when the journey began because it was a completely innocuous journey in the beginning.  I noticed many years ago that I no longer had hair on my arms, but then, I never had a lot of hair, so I thought little of it.  Then, I noticed I didn't need to shave my legs because I didn't have hair on my legs.  Score!  That is a benefit that I get from going through menopause, was my first thought.

Next, as I innocently proceeded on this journey I didn't know I was on, I started noticing that I had a red inflamed spot on the left side of my hair line.  It didn't itch.  It just looked terrible.  I also noticed that hair would fall out when the spot seemed to heal and move to a new spot.  Finally, on April 6, 2006, nearly ten years ago, I consulted a dermatologist.  I told him it looked like I had an infection or inflammation of some type on my scalp.  I somewhat sheepishly told him I didn't know what to do about it so I was treating the area with Listerine.  Seriously, I did that!  My logic was that putting this antiseptic on the weird looking sore would be better than doing nothing.  I had also stopped using the hair product I was using because I thought my scalp was reacting to it.


I was already into a hair loss journey in this photo, but I didn't know it.


Frankly, I was dismissed by the derm.  I think he thought I was a nut job.  I guess I can forgive him for that.  I'm sure he hadn't seen anyone else that was using Listerine on skin problems that day.  He asked me if I had tried Windex.  Funny.  He then said he didn't know what it was.  He'd never seen it before.  He thought it might be psoriasis, but it didn't really look like it.  I have a history of psoriasis, so I accepted his diagnosis.  He did not offer to biopsy the area.  He gave me a prescription for Protopic and sent me on my way.  The Protopic cleared up the worst of the inflammation, and I thought little about it again.

My hair continued to thin.  I fretted, but I also figured it was a part of aging.

I remember that during the summer of 2010, just months after my daughter Julie died, my hair started falling out enough to notice.  My clothes would be covered with fine silver hair.  When my friends or family would start picking it off of my clothes, I called it my tinsel.  The tinsel is falling of the tree, I'd say.  I was told by doctors that stress was causing my hair loss.  "It will come back."

In July of 2011, I was visiting my daughter in Utah during a time of great stress for her.  The morning after I arrived, as I was putting on my makeup, I noticed my eyebrows were completely gone.  They'd been there the day before.  I called to my daughter, "Keicha, come here.  Do you see any hair where my eyebrows should be?  Where have my eyebrows gone?"  She confirmed that the eyebrows were indeed gone.  She didn't know their whereabouts.  This seemed really odd.  Under my breath, I said "I rather liked my eyebrows."

Another doctor visit about the the loss of the eyebrows received this response, "Have you been plucking them?"  Seriously.  In the doctor's defense, I must say that it was actually a legitimate question.  Perhaps, she thought my stress had started manifesting itself with trichotillomania, otherwise known as hair-pulling disorder.

I saw a new dermatologist.  She was a personal friend and knew of my recent loss.  She was compassionate and supportive.  She thought I had a form of alopecia.  She said stress could have triggered it, but she thought we should take a wait and see approach. She said it wasn't really presenting like alopecia areata.

Alopecia, a word I couldn't even pronounce if I did remember the term when describing a person who suffered from the condition.

I remember coming home from the appointment and looking up the condition on Dr. Google.  I wrote the term down and practiced saying it.  I didn't want to forget what it was.  (Believe me there has been no forgetting!)  This doctor was the third doctor that I had seen for my hair loss.

I looked up the specialist for alopecia areata on Dr. Google.  I found it was Dr. Norris at UC Health.  I felt I was a bit premature to try to get an appoint with him.

The next time I saw my endocrinologist, I asked her what she thought was going on.  She said that my thyroid was not the problem.  She said that it could be stress that was causing the problem, but she wanted me to get the scalp biopsied.

Heaven only knows why it took me a year to get a scalp biopsy.  There are legitimate reasons:  I had a fall that resulted in a head injury.  I suffered from visual vestibular disorder and couldn't drive for a year.  I had heart problems I was chasing down.  I had digestive problems I was trying to solve.  We sold our house.  We moved.  I had a lot going on.  My hair continued to fall out.

Finally in March of 2013, I saw another new to me dermatologist in Colorado Springs. He immediately diagnosed me as having frontal fibrosing alopecia, but he said that he would have to biopsy my scalp for a solid diagnosis.  I had never heard of FFA before.  The biopsy came back confirming FFA and lichen planopliaris.  He sat me down and painted a grim future for me and my hair.  He showed me pictures from the internet.  I was in shock and disbelief.  "Surely this won't happen to me."   He said that there was really no treatment, and he said that the treatments that might help were dangerous.  Plaquenil was mentioned as something I could try, but he thought the risks out weighted the benefits.  He said nothing would bring my hair back.  The plaquenil just might stop the process of loss.  I chose not to take plaquenil.  He prescribed clobetasol as a topical to help with the itching, pain, and soreness.  Yes, FFA and LLP are quite painful.  The pain is physical and not just emotional.

I saw Dr. Norris at UC Health in early to mid 2014.  He wanted to give me plaquenil.  He also prescribed finasteride, using its non-generic name of Avodart.  He said, "Avodart is being seen as having success in fighting FFA in the literature coming from the research being done at Duke University.  It is given to men with enlarged prostate, but it seems to stop the progression of FFA."  I was in shock, and quite frankly, I thought to myself that the man was grasping at straws.  Well, I was too, but I wasn't quite ready to be a lab rat.  Later that evening, I received a call from the pharmacist.  "I just received a prescription for finasteride for you from a doctor at the University hospital.  I've never seen this prescribed to a woman before.  I think there has been a mistake."  I assured him it was not a mistake.  I asked for his input.  In the end, I decided against taking any oral medications.  I did not want to be a science project.

I found another dermatologist.  This one prescribed topical steroid treatments.  I also began getting Kenalog shots in the scalp.  I broke out in rashes from the shots.  I broke out in rashes from all the traditional steroid treatments.  I took pictures of the rashes to show my doc.  He said "No more steroids for you."  My hair continued to fall out.

I learned how to cover up a lot of the loss with headbands, scarves, hats.  Then, I bought a hair piece.  I then bought three different wigs.  I cut up the wigs and made my own hair pieces.  I had a hair piece handmade for me to match my hair loss pattern.  I had not counted on having the loss spread even more to the crown of my head over the last couple of months.  I was truly in denial that it would ever get that bad.  I no longer can disguise my condition.

Below is a selfie of my new hair piece that I had designed and made for me.  Only the bangs and the top part of the sides are not my real hair.  The back of my head is covered with my own hair.  I love the solution that my amazing cranial prosthesis hair dresser at made for me.  My eyebrows are drawn on everyday.  I must do a pretty good job because I've fooled more than one doctor when I've told them my eyebrows are gone. 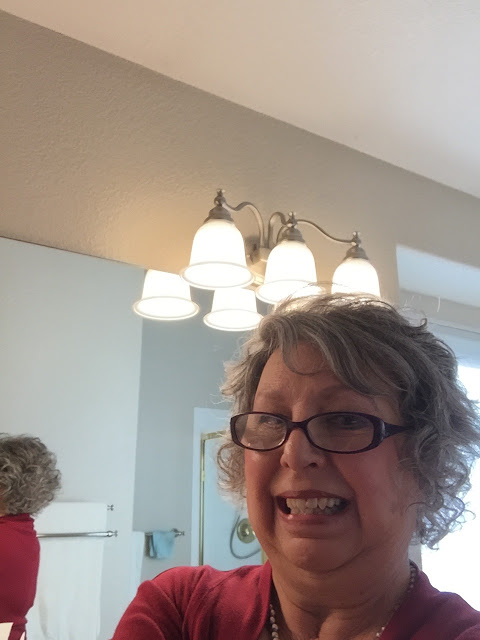 After Christmas, I called Dr. Norris and made an appointment.  I was now willing to take finasteride and plaquenil.  My doctors at National Jewish encouraged me to try these medications and assured me of their safety.  I was told I had to do something about the inflammation levels in my body.  Inflammation has  destroyed much my hair by causing it to to fall out and leave behind scar tissue that will never again produce hair.  I don't need inflammation to destroy my heart or my joints or any other part of my body.  I have several auto-immune diseases now.  Two of them are quite rare.  I don't need any more.  I have made my decision.  I'm taking the medicine.  I giving this terrible, disfiguring, destructive disease a good fight.  I hope to stop the loss.  Who knows, maybe I will even grow back a bit of my hair.