We brought home a half bushel of peaches from our trip to peach country on the Western Slope of Colorado.  Even after sharing half of the box of peaches with friends and family, Jim and I have had fresh peaches for breakfast nearly every morning for several weeks now.  Our tomatoes are also starting to ripen, so I have been thinking of ways to include an abundance of cherry tomatoes into our meals.   Eating all of this wonderful fresh produce has reawakened memories of days gone by.

Memories of Gardens of Long Ago

When my children were young, we lived in North Ogden, Utah.  At one time, before farms were broken up into subdivisions, North Ogden had been an area where the folks in Ogden would go to get peaches, apricots, and cherries from the many orchards that grew in the area.  North Ogden was also known a place that grew wonderful raspberries.

Our home had been built on a fairly large lot where one of those a peach orchards once stood.  The builder had left some of these old peach trees on the property, and by the time we bought the house three trees remained.  The former owners of the house had built a new home where an apricot orchard once stood.  They asked if we could trade trees each year.  In other words, they wanted to come and pick peaches from one of our trees in exchange for us picking apricots from one of their trees.  It was an arrangement that worked well.

As the above photo of my two sons shows, these peach trees produced an abundant crop each and every year.  Can you see how the branches are so loaded with peaches that they are nearly touching the ground?

While my children most likely have only great memories of climbing these trees and playing beneath the shade of them, I mostly remember that I had a love/hate relationship with them.  I'm allergic to peach blossoms and to peach fuzz, so I would have a terrible time with my allergies when they were in bloom and when I had to pick them.  Sometimes, when the trees were loaded with peaches, my arms would be covered with rashes when I would go out to pick peaches.  I am also very afraid of heights, so I would not get up on the ladders to pick the peaches at the top.  I hated to have the kids pick them too, because they would want to go out on the branches to reach those peaches inaccessible by ladders. I would stand on the ground afraid the branch would snap and they would fall and break a leg, an arm, a neck.  If we didn't get them picked, the peaches would fall to the ground and make a terrible, mushy, smelly mess.  The peaches would quickly rot on the ground and before long the air would have a terrible vinegar smell and the peaches would attract earwigs.  Needless to say, I tried to harvest as many peaches as I could.

What did I do with all those peaches?  I canned them.  My memories of those days when the above photo was taken are memories of being very, very busy this time of year.  In 1979, I had five children under the age of 12 and a very large yard and garden to help maintain.  My former husband, the father of my children, did most of the maintenance and care of the yard and garden, but he would go off to summer camp for the Army Reserves every summer for two weeks.  During that time, it was really a chore to keep up with the kids, the house, the yard, the garden, and canning.  I wonder now how I did it.  In my neighborhood, one could barely hold one's head up without feeling shame if one didn't relate the number of bottles of peaches, pears, applesauce, jam, tomatoes, or whatever else was in season one had preserved that week.  It wasn't all peer pressure that drove me.  The produce I canned was what fed us during the next year.  We counted on it to supplement our food budget.  Plus, there was great satisfaction that came from seeing my shelves in basement filled with all that beautiful produce bottled and waiting to be consumed.  In many ways I miss those day, but I remember how bone tired I would be as I stood at the sink and peeled peaches and tomatoes, made jams and jellies, sauces and juices.

We didn't just grow peaches.  We grew a lot of raspberries.  I never had many to freeze or to make into jelly because we ate them fresh as they ripened everyday.  Raspberries are a lot of work to grow, but the rewards outweigh the work.  What I wouldn't give to walk out into the yard to pick fresh raspberries again.

We also grew grapes. Every fall, not long after the kids would have returned to school, I would step out onto the back deck and know that it was time to harvest the grapes.  I could smell them when they were ready.  This was usually just as the weather was turning cooler, just before the first hard freeze, in fact it seemed that there would be a slight frost the night before they were ready.  Below, is a photo my me and my precious Julie as we show off the grapes we just harvested. 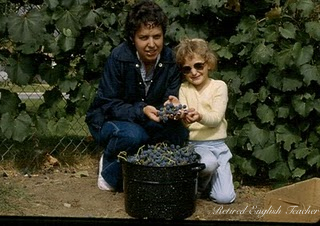 I've also been thinking about all the tomatoes I used to grow to can.  My father-in-law was a master gardener when it came to growing a vegetable garden.  My daughter told me he grew tomatoes this year in his garden during his 88th year.  His tomatoes were always abundant and beautiful.  I never could grow tomatoes like he could, but then, I didn't care for them as well as he did.  I grew them because I loved eating a fresh one from the garden everyday, and I loved to can them to use throughout the year in cooking.  Home canned tomatoes went a long ways in stretching the food budget when feeding five children.  I've been thinking I should can some again when I read all the salt that are added to the canned tomatoes and tomato sauces that we buy off the grocery shelves.  Surely, my home canned tomatoes would be better for us.

One year, when I was growing tomatoes to can, our garden was being overtaken by grasshoppers.  I was very frustrated by the way they were destroying our tomato crop.  My former husband, who was a teacher, was talking about how the grasshoppers were ruining our crop at work one day.  One of his fellow teachers who owned a farm not far from our house said that he had ducks.  He said the ducks ate the grasshoppers before they could destroy his tomatoes.  Based on his experience and observation, we decided that we would have to see if the ducks would help our situation.  My husband drove over to his friend's house, loaded up a couple of ducks in our Ford Pinto, and brought them home.  The kids named them Donald and Daffy.

I could see the downside to having ducks right away.  Do you have any idea how much of a mess they make in the yard?  I couldn't even let the kids go out in the yard to play.  We had to be very careful and watch where we stepped when we went out to the garden to pick vegetables or fruit from the trees.  I thought it was worth the mess if we got rid of the grasshoppers.  Soon, we had few grasshoppers.  It seemed to be working.  There was just one problem.  I still was not finding any ripe tomatoes.  I would see that tomatoes were nearly ripe, but then I could find any ripe ones to pick a day or two later.  Then, as I was gazing out of my kitchen window as I washed the dishes one evening, I discovered why.  One of the ducks was in the vegetable garden.  He was standing next to the tomato plant where I could clearly see a ripe red tomato.  In just an instant, the duck took the tomato into his mouth and walked away.  The ducks were eating my tomatoes!

Since the ducks were making a mess, and since the neighbors kept calling and saying, "Your ducks are in our yard again," and since the ducks ate more tomatoes than the now gone grasshoppers had done, we decided our plan was not working.  After the children were all in bed that night, my husband and I loaded the ducks in the back of the car again, took a little ride out to the marshlands, and let the ducks go.  They had been trying to fly away anyway, so we figured they would be much happier where they belonged, and I was happy because now my tomatoes could grow without any disturbances from outside predators.