I don’t make resolutions, because I know I won’t keep them, but I do try to evaluate the habits I have that keep me from living life the way I want to live it.  At the beginning of a new year, I think of getting up earlier, being more productive with my time, writing more, losing weight, exercising.  I doubt I’m any different than anyone else.  I just hope to look at the new year through new eyes so I can gain a new perspective. (In the photo below, I am using 2018 glasses as a headband.) 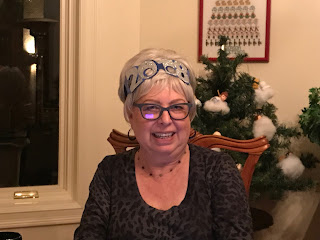 I had such hopes for the first of year.  I was for sure going to get back to blogging.  I have truly missed it.  I knew the only way I would get back to blogging by reading, commenting, and writing again would be if I made some changes to my daily schedule.  I would have to stop settling in my chair with a cup of coffee, my iPad, and checking out Facebook, and my new time waster,  Instagram.  Honestly, I have wasted, yes wasted, way too much time with this kind of start to the day.

I read two newspapers before I get going, so by the time I even think of getting up out of that favorite chair to make my breakfast, the morning has been whittled away to nothing.

Yes, I resolved, this year, I was going to get up early and get going with being productive in 2018.

On the January 1, 2018, we didn’t get up early because we had been out celebrating too late.  We aren’t kids anymore, so staying up partying until way after midnight means that we start the new year by sleeping in.

The night before on New Year’s Eve, we spent a wonderful night celebrating with my cousin and her husband at their beautiful home.  They have a group of friends from high school days that they celebrate with, so we were happy they invited us to join them.  I said we were the chaperones since these “kids” are half a decade younger.  We had so much fun.  The party was a great success.  Our host cooked a marvelous meal.  After eating, we watched the fireworks that were set off from the top of Pikes Peak, then we drank a bit of champaign, sang Auld Lang Syne, toasted each other and the new year, took a few more photos, and then headed home. 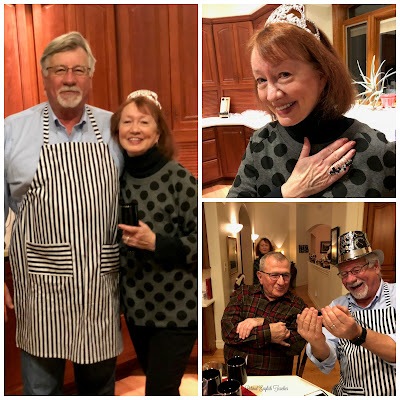 We had plans for the first day of the year that included taking down Christmas.  Jim and I decided that the tree would stay up another day because we were too tired to take it down on January 1st.  In fact, we didn’t take down any of the Christmas decorations.  We would do that the next day, on January 2.

Early in the morning on the second day of January 2018, my husband woke me out of a deep sleep by calling my name in a voice that startled me.  When I was finally able to respond, he said, “I don’t feel well at all.  I’m sweating.  At times I’m hot, then I’m cold, and I am really dizzy.”  I was immediately out of bed and standing next to him at his side of the bed.  Indeed, he was sweating.  He was in a cold sweat.  In fact, his forehead was very clammy.  I asked what he was experiencing, and was told he’d been like this for at least 45 minutes.  He said he’d gotten up and made his way to the bathroom but barely made his way back because he was so dizzy.

I ran for the blood pressure cuff and took his blood pressure.  It was extremely low.  I asked what he wanted me to do, or I guess I actually gave him two choices: did he want to go to the hospital by car or by ambulance.  I asked about other symptoms while I quickly threw on clothes and shoes.  He said he wanted me to drive him to the hospital and said he had no other symptoms.  (He actually kept a few important facts from me because I think he knew I would have called an ambulance had I’d known all his symptoms.)  His dizziness made it difficult for us to make to the car, but we made it.  The nearest hospital is only ten minutes away, so I wasn’t too concerned as I made my drive, but honestly, I kept wishing I’d called an ambulance.

Once in the ER, he told the nurses that he had numbness in his left arm and left foot.  He also had chest pain.  That is when all the tests began as they tried to find out what was going on with him.

The hospital near us is a new one, and the hospital and the staff are wonderful.  We had help immediately.  He had a CT scan, EKG, and blood work done in less than an hour.  All tests came back looking good, but Jim continued to be dizzy, and he continued to have severe numbness on his left side.

He slept from the time I got him there around 7:00 a.m. until 1:00 p.m.  After speaking with specialist at the University affiliated hospital across town, it was determined that Jim would be transported to that hospital for further testing and observation.  It was suspected that he had experienced a TIA (transient ischemic attack).

After nearly twelve hours in the emergency room of the original hospital where I had taken him, he was transported to Main by ambulance.  I was skeptical that anything would happen that night in the way of talking to a neurologist or of having tests.  I could not have been more wrong.

Jim was admitted to a room in a new wing of the hospital devoted only to stroke victims.  On the very day that this new Comprehensive Stroke Center for southern Colorado was announced in the news, Jim became one of its patients.  We could not have been more impressed.  He was barely in his room when he was visited by the neurologist who already had been speaking with the ER doctor and had seen his tests from the ER.  Soon, a hospitalist was at his bedside also.  That night Jim had three MRIs and was constantly monitored while also being evaluated for stroke symptoms continually.  He was also given many tests for his heart.

Thankfully, all tests came back not showing a stroke, and his heart also checked out well.  (Jim had a heart attack when his LAD was 95% blocked in 2011.)(click the highlighted area to read about this event) As a result of all of the testing and his symptoms, it was determined that Jim most likely did have a TIA.  The first twenty-four hours after such an event are the most dangerous, so he was monitored until late in the day of January 3, then after making a few changes in his medicine, he was discharged, and we went home with grateful hearts because it all could have been so much worse.

I did not expect to begin 2018 with a medical scare.  We both have had a big wake-up call when it comes to listening to our bodies.  A word of caution to us all:  If it seems things are really off, if dizziness is nearly knocking one to the floor, if blood pressure is extremely low, if parts of the body are numb, then get to the hospital, preferably via an ambulance.  Time is of the essence if one is experiencing a stroke.  Also, a TIA is not to be dismissed as a small matter.  Within the first 24 hours after such an event one is at risk of a stroke.  Also, one is more highly at risk of having a stoke after experiencing a TIA. 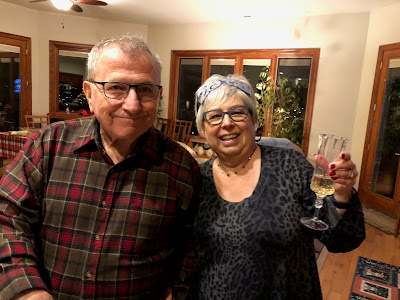 Today, we took it easy and rested.  I didn’t want to go to church with all the flu that is out there.  I also felt we just needed to rest up because yesterday I felt like I was fighting off some bug.  Thankfully, today whatever was making me achy and chilled and tired headachy and sick feeling left me.  We went for a nice walk this afternoon.  As we walked, linking my arm through Jim’s, I said, “You know I don’t take this ability to walk together on this crisp January afternoon lightly.  We are so blessed to have each other and to be healthy enough to walk and enjoy life.  That opportunity has been denied so many from our same age group."  We’ve lost friends and acquaintances in the past year to heart attacks, cancer, falls, and other illnesses.

One thing I know for certain:  we have absolutely no guarantees in life.  Resolutions may be the thing we think we should do at the beginning of the year, but I have decided that for me instead of worrying about how I am spending my time, I’m going to focus on being grateful for the time I have to spend.  I think gratitude is a great informer when it comes to making choices on how to spend time.

Each day is a gift.  Each moment we have to share with each other is a treasure.  If we spend too much time staying up late reading, that is ok.  At least we can still read.  Besides, we love sitting side by side reading late into the night.

If we sit and sip coffee all morning and don’t accomplish anything, that too is ok.  We love our morning routines of chatting, reading the newspaper, and catching up with the world.

On our way home from our walk today, we changed up the route a bit.  It threw Boston off his game.  He is used to our same routine and route.  As we approached our home, he threw us off a bit too when he suddenly jumped up on a bench in our neighbor’s yard.  He used to love to jump up on walls and benches as a pup.  Today, I guess he felt young at heart and just had to jump up on that once favorite bench of his like he did when he was younger.  Or maybe, he just wanted to have a closer adoring look at his master.  Maybe he too was grateful for walk on a beautiful Sunday afternoon in January and he just want to make sure his master knew it.  These two love each other.  This photo is priceless. 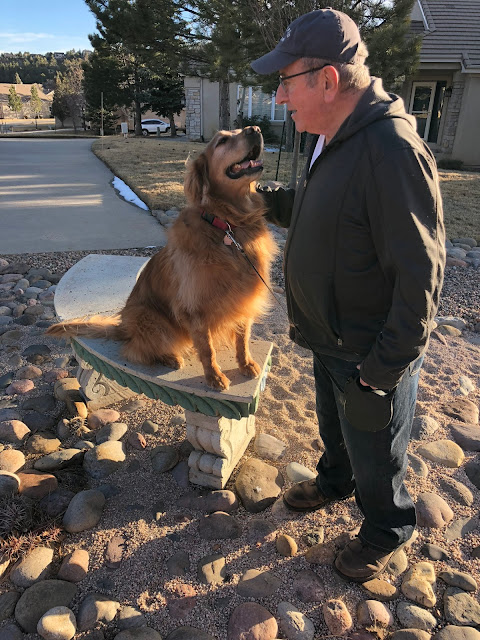 Life truly is best lived in the moment.  Treasure each one you have with your loved ones.  Let them know it by giving them one of those adoring looks when you gaze in each other’s eyes. Or, you might just want to kick up your heels and do what you used to love to do when you were younger.  Moments like these are something to bark about.