My September song began the day I gave birth to my firstborn.
On a beautiful September day, the seventeenth day of the month of September in the year 1967,
I became a mother.
Forty years later, my wonderful son celebrated his birth by completing a 206 mile bike ride from Logan, Utah to Jackson Hole, Wyoming.
The next morning we were photographed in front of a large clock in the condo in Jackson Hole, Wyoming, he had rented where we would stay to celebrate his successful ride and birthday.
The clock had this quote in French on its face:
The Time of Your Life.

I loved being this boy's mother.
I still love being his mother.
I grew up the day I gave birth to him.
My life became much fuller and had a greater purpose.
He has always brought joy to my life.
He is a happy man who never fails to make me laugh.
I am quite proud of him.
After him, came four more children.

Before I knew it,
this boy, my firstborn, became a man and on another September day he presented me with his third child and my fifth grandchild.  His namesake, Ryan Bridger, called Bridger,
became another joyful September song to me.
Julie, living in Salt Lake at the time of Bridger's birth came to meet her new nephew.

A few years later, my youngest son presented me with a third September joyful song when he and his wife gave birth to Atticus Roberts.  Atticus became my seventh and last grandchild.

September is one of my favorites months.
There was a time, when I was raising my five children when the trees were heavy with fruit waiting to be harvested and to be preserved.
September days were filled with making breakfast, lunch,  and dinner,
Picking fruit and canning it,
Picking tomatoes and canning them, and
Caring for five children born in a span of ten years.
September was a happy, busy time.
There was a time in September, when I would walk out onto the back deck of our home and I could smell the fall air rich with the smell of grapes ready to harvested.
The air had cooled, and the first light frost would have set the flavors in the grapes.
Now it was time to make grape juice and grape jelly.
The grapes had to heated and crushed to make the wonderful, sweet tasting juice.

September is Suicide Awareness Month.
Today is the last day of that month.
A verse has been added to my September song that I didn't see coming.
I did not want this verse in my song.
This verse tells a story about a chapter in my life that I did not want included.
And, yet, because I have this verse in my song, I must raise my voice and sing, or speak, since I am not much of a singer.

The first night I returned home after my daughter's suicide, I wondered how I would make it.
I no longer understood anything about my life.
My past made no sense.
My future...well, I couldn't even foresee a future because I was trying to make sense of the present.

"Catastrophic loss is like undergoing a loss of our identity."
Jerry Sittser said this in his book A Grace Disguised.
I only knew this truth because I was living it in the days after Julie's death.
It was several months later that I would read this truth and know that I had experienced a
loss of my identity when I lost my daughter to suicide.
I didn't know who I was.
The script of my life had been altered.
A verse in my song had be thrust in that made every verse before it seem discordant and out of rhythm.

A dear friend, Sandy Decker, one the first ones I called to tell of Julie's death, came to Julie's funeral and gave me a book.
The title spoke to me.
It was a picture book.
I couldn't really read words yet; I was too crushed.
So this book was perfect for me at that time.

I read it the first night I was home from spending a week with my family near the place where Julie had lived.  When I climbed into my bed that night I was
too numb to  fathom how
I would get up and live the next morning.

In the story that is told by the book, the narrator is walking along the beach of an ocean.
As most of us do at the beach, she begins to look for shells.
She comes across a broken scallop shell, but leaves it search of a perfect shell.
Then, she realizes that this broken shell is like she is with her broken heart.
She realizes that this shell had not been totally crushed by the pounding surf.
She realizes she can learn from brokenness.
She learns she will need
courage
to remain on the beach,
to live with the pain she is feeling,
to not embrace
a vision of a perfect shell,
but to instead,
to embrace brokenness.

The Lord is close to the brokenhearted;
and those who are crushed in spirit He saves.
Psalm 34:18

The message of the book spoke to me.
I knew with the Lord's help I could live with my broken heart.

Life was not perfect.
It was never intended to be.
Day by day, I would learn to live as a broken person in a broken world.
I learned I could only do this by grace that was given me by the
Lord who said He would be with me,
the brokenhearted.

He also gave me friends who become my life support.

During the first September after Julie's death,
Team 8:08 was formed to walk in the Pikes Peak Suicide Prevention Partnership Walk.
The walk has three purposes:
1) To raise money to raise awareness to prevent suicide,
2) to remember loved ones lost to suicide,
3) to support survivors.

Julie's friends from high school formed the team and asked if we would come and walk with them.
Below are Julie's main five women in her life.
Each one is an awesome woman.
Each one loved Julie and was loved by her:
Sharon, Leana, sister Amy, sister Keicha, and Sheridan. 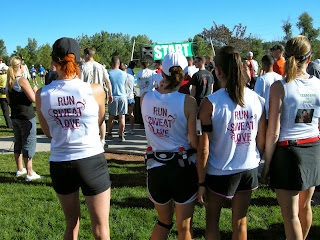 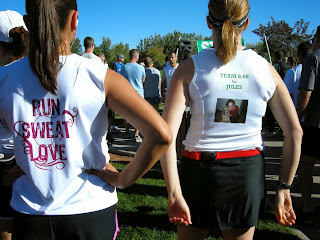 Look at this team.
Each one was brokenhearted because one person took her life.
Each one will never forget Julie,
nor will they ever forget how her final act broke their hearts.
Each one reminds me and helps me remember what an awesome girl and woman my daughter was.
They carry her memory.
They help me remember how many wonderful facets she had.
They help me remember that she filled her life with wonderful friends.
Each one would have been there for her in her greatest need, would have done anything to save her,
if only she would have reached out.
Several were there many times before when her demons would overtake her mind.
One, her sister Amy, probably saved her more times than even I know about.

This year, Team 808 walked again for Jules.
Again, Leana was the driving force to organize the team.
Thank you, Leana.  I love you.  You are such a dear and loyal friend to us all.
This year, the team included,
myself, my husband Jim, my daughter Amy, Julie's & Amy's father and my former husband, and my niece, Cristy. 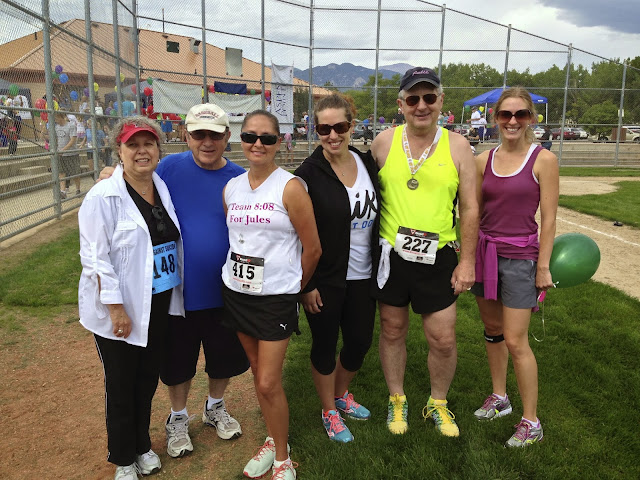 Some of us walked while others ran.
Julie's father won a first place medal.
Julie would have been so proud. 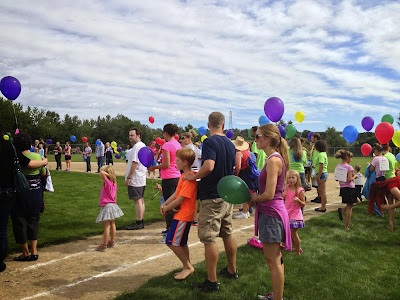 There were many at the walk that day.
Many names were read in remembrance.
As I looked at the others gathered to remember a loved one, I was overwhelmed by the sheer numbers of lives who have been touched by suicide.

I reflected on the new verse of my September song,
the verse that talks of loss, remembrance, and broken hearts.
This verse in my song now is sung every September when I am reminded that it is once again
Suicide Prevention Month.

Thankfully, this particular verse does not end in hopelessness.
It ends in hope and healing.

Despite the verse in my song that I did not want included,
there is a refrain that is repeated throughout the song of my life.
The refrain speaks of
joy,
hope,
healing,
and of the faithfulness of God,
who now holds my sweet Julie in His arms
and comforts me with His presence.
He sends me
people,
so many wonderful people,
who have loved and supported me and my family.

This is my September song.
It is a beautiful song because it speaks of love.
A mother's song always begins and ends with love.