Another One for The Books

I decided I'd be keeping Christmas this year.  A little over a year ago, a friend related to me how after the death of her sister when the girl was in high school, her mother never put up another Christmas tree.  She said that her mother's refusal to really celebrate Christmas after the tragic death of her daughter just before the holidays had impacted those who remain.  She continued to tell of how she wished her mother could let go of whatever was not allowing her to move forward because those who were left were not able to fully enjoy either the holiday or the mom they once knew.

Her story came back to me right after Julie's death.  I promised myself that I would try to be fully there for the children I had left.  I wanted to make sure I didn't miss out on making new holiday memories with my children and grandchildren.  I resolved that I would keep Christmas.  And, so I did.  It was harder than I ever thought possible to put the pain and loss behind me, and I know it was hard for my children also.  We did the best we could to enjoy each other, and to be honest with you, that is easy.  My children are a lot of fun.  I love being with them.

On Christmas morning, my husband and I got up at 5:30 so we could be at daughter Amy's house by 7:00. The house looked dark when we drove up.  "Really now, are they all still sleeping?" I asked my husband.  Yes, they were!  We had to bang on the door to get Amy to answer.  Even the kids were all still asleep; I guess those new jammies must have been really warm.  Soon Jon, wearing his lungi, emerged, ready to greet the day and wake the children. 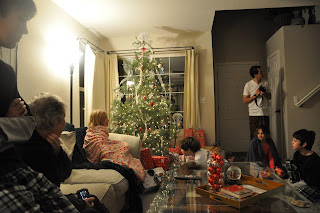 One by one, wrapped up in warm blankets,  the grandchildren gathered around the tree.  It proved more difficult to rouse the adults.
Chaos almost seemed to take over at some point. Let's just say it was a typical Christmas morning around the tree.  There was a lot of paper, boxes, toys, and new treasures to be found.

The gifts that seemed to get the greatest approval, were those that Jon and Samantha brought with them from Bangladesh.  Each of the boys got at lungi! Soon, they were learning how to tie their new loungewear around the waist.

Ryan and I gave each other Kindles.  That was a funny story.  I guess we were both on the same wave length this year.  I love my Kindle.  Thanks Ryan!


There were many wonderful gifts under the tree, but the hits of the year were:  the lungi, the ukuleles, the brightly painted recorders from Bangladesh, and a harmonica.  Soon the house was filled with much music as all the kids tried to learn to play the new instruments.

D, Jon's friend from high school years and beyond, took a break from his job as an attorney, traveled from another state, and joined our family celebration this year.  He was pretty good on the ukulele.   As he serenaded us with "Blue Eyes Crying in The Rain," Parker sat at D's side trying to pick up some pointers.  Hey D, did they teach you those fancy ukulele playing skills at NYU?
As is our family tradition, we had brunch after opening the gifts.   Our wonderful breakfast feast included fresh pineapple from a gift basket from Aunt Suzanne, other fresh fruit, ham and a choice from several wonderful quiches prepared by son Ryan.  He traditionally serves up a great Christmas morning brunch each year in Utah.  We were happy that RyHop was in operation in Colorado this year.

After brunch, he went to work on his Asian deviled eggs.  I can't tell you how he made them, but they were delicious.  He's a banker by day, but he also does a pretty awesome job of cooking up some pretty fancy dishes.  (Note how the eggs look so nice in dish that Amy hand painted.)


It seemed we ate all day.  I can't even tell you what all was on the menu since I didn't have to do the cooking this year.  I know we had some yummy dishes.  One made by daughter-in-law Stephanie was a sweet potato and hot green chili dish that was really good.  Amy was quite proud of her green jello and insisted that I take a picture of her creation.

The day was filled with laughter, eating, much music, and game playing.  Hannah snuggled in her new blanket.

Regan modeled her new clothes.  When asked how she got such style, she said it has taken her a while, but now she is learning how to put together her look.  At nearly 13, she is already a beauty.

At some point, Grandma and Grandpa went back to the hotel to shower and get dressed for the day.  When we got back to the house, it was time for a Christmas afternoon walk to the pond so Parker, my outdoor enthusiast, could try out his new duck call whistle.

Christmas evening, there was more game playing.  Monopoly was played until someone suggested poker.  It turned out that the kids didn't know how to play and I, who had learned to play poker as child when my father taught me and cousins how to play using pennies, decided to join the fun. By then, Jason, Julie's boyfriend, had joined the family frivolity.  Soon, he was winning at poker.  I was losing from the very beginning.  Jason's poker skills were no match for the novice player Bridger. 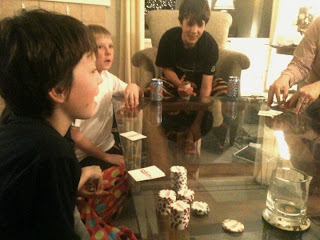 In the end, Bridger wiped all of us out.

We missed Keicha and Gillian and wish they could have joined us.  It was hard to even think of celebrating Christmas without Julie.  We knew we wanted to be together, and I'm grateful that Santa answered Regan's letter and made sure that this happened.

The letter reads:
Dear Santa,
I have never written one of these but I just wanted to say thank you!  Every year you have gotten me what I asked for.  It is so nice.  I am writing you this year because it is a very hard year for my whole family.  It is hard because my Aunt Julie is gone.  It will be the first year without her.  We are going to Colorado because my Aunt Amy is having a hard time too, but you know what goes on in everyone's life in the world.  Thank you again, and I don't mind if you can't get the aqua lap top.  No matter what, you are still the best man in the world.   Regan

As the family reflects on Christmas 2010, I hope we treasure the time we had together as a family.  I hope we've learned to hold on to each other tightly and not take any one of us for granted.  I hope that we remember that time spent together as a family cannot ever be wasted time.  I hope we remember how important relationships are, and that we continue to value the ones we have.  I hope each individual will continue to heal, and that all fractured relationships will also be healed.  In the end, we are family.  We are resilient.  We try to accept each other as imperfect human beings with frailties.  We try to be there for each other.  We love each other deeply.


We included friends of Julie's and Jon's throughout the extended time of holiday celebration.   These friends have enriched our lives greatly and helped us shoulder the pain we have suffered over these past seven months.  Our celebrations were not the same without Julie.  We missed her laughter, her dancing to the music, and her unique personality.  We missed her competitive spirit in games.  We missed her caring nature.  She wasn't there to put her arm around my shoulder.  She wasn't there helping out in the kitchen.  She wasn't there cleaning up the Christmas mess and restoring order to our surroundings and lives.  She wasn't there playing games with the kids or building things with logos.  She wasn't there thriving in the middle of the family chaos.  She was there in our hearts, and there she will remain.  Christmas will always remind us of our loss, but it will also reminded us that she was a gift to us for 34 years.  We will continue to treasure her and each other as move forward into 2011 and the future.