When spring comes to the Rockies, we know what's coming next:
snow.
Who can complain when we see sights such as this? 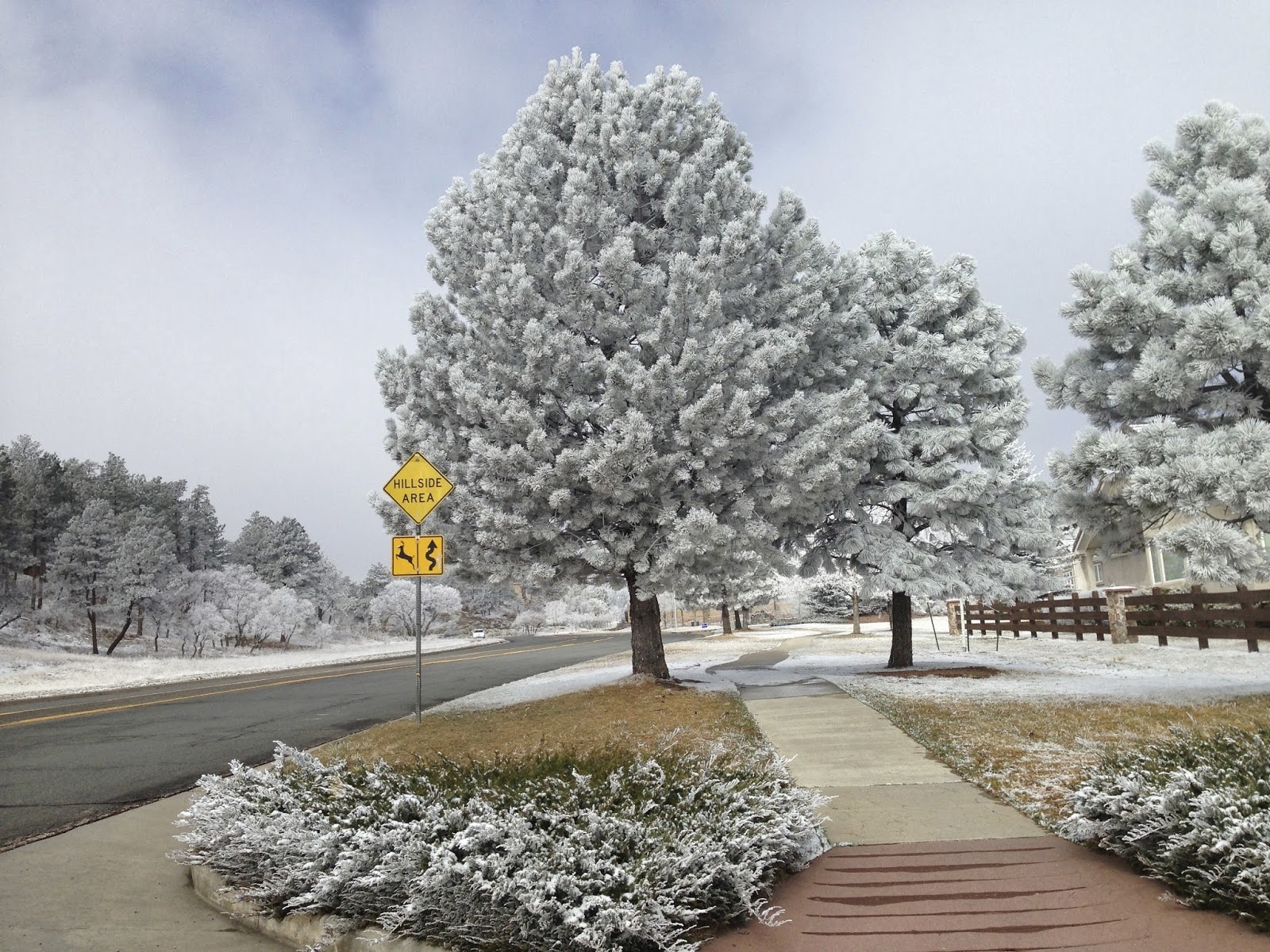 Yesterday, as my husband and I drove out of our little village to enter the main road, we literally gasped at the beauty that had visited our part of the world overnight.  Every tree, every bush, every weed along side the road seemed to be a work of art.  The Master Artist had frosted the entire city.  Our drive down the main road was so beautiful that my husband stated that he had never seen blossom laden trees lining an avenue that could compare to the beauty of the frost covered trees that lined the main road into town.

The photo above was snapped quickly with my iPhone.  Later in the morning, as I walked out of church, the sky was more of light blue, the clouds were lifting, but the trees were still covered in frost.  I have rarely seen such beauty all over town.  I wanted to snap a photo of every tree I saw.  I hated to see the sun come out and melt the spectacular show that left me repeating the phrase, "This is just spectacular."  To my husband I said, "We could travel all over the world and never see  more beautiful sights than we have seen today in our own town."

All of the schools in the area are on Spring Break.  We were teachers way too long not to join in the celebration that happens on the first Friday night of Spring Break.  We had a wonderful Mexican food dinner in a part of town where we rarely go.  On the way home, I asked my husband if he would like me to treat him to dessert at the old Ivywild School, an old school that has now become a brewery, bakery, and eatery.  Once there, of course, my husband headed straight to the principal's office.  He didn't stay though; the office is now the bar. 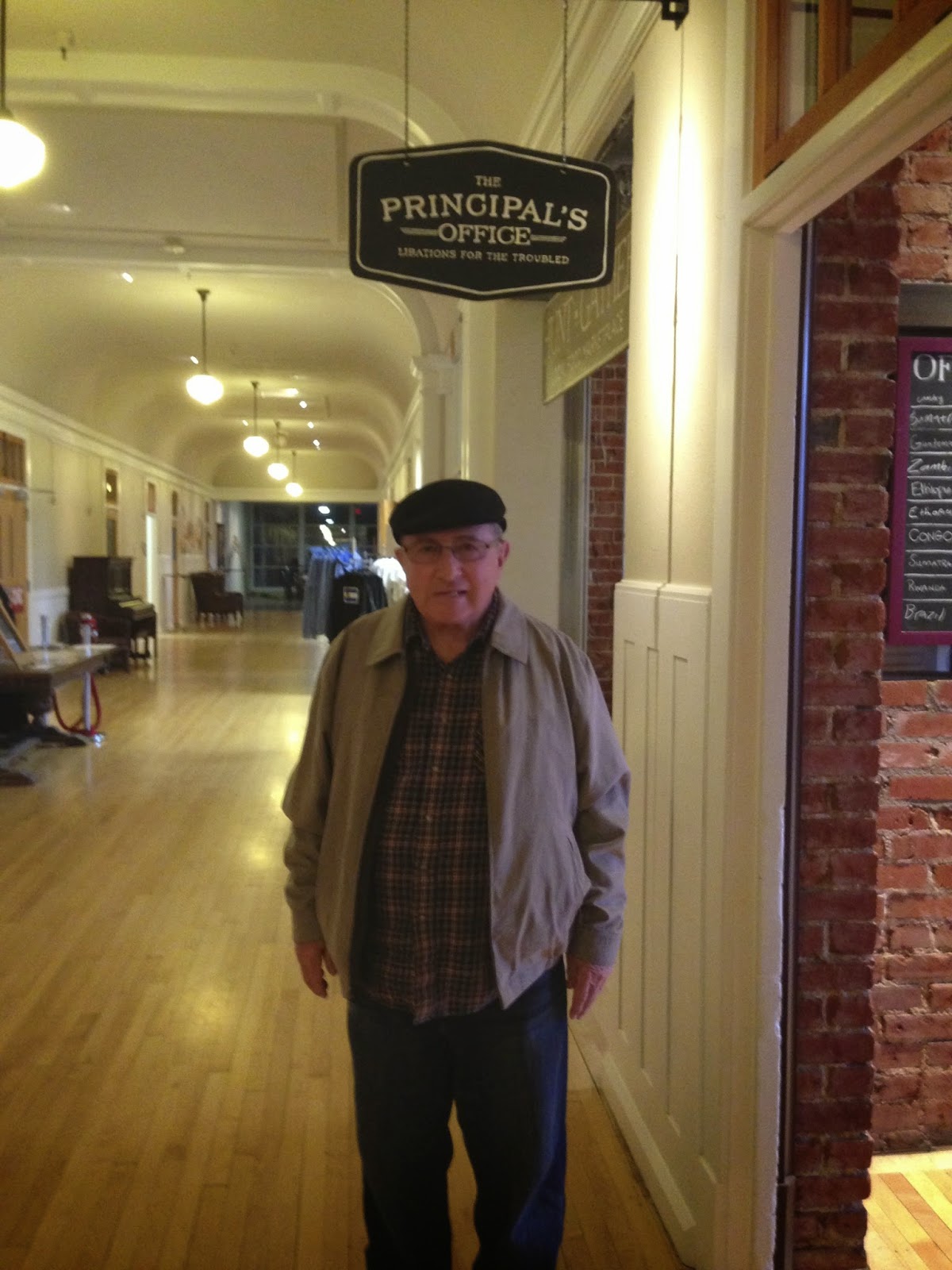 We bought some delicious cherry pie from the bakery and sat down to enjoy the ambiance and energy that filled the place while we ate our food.  I immensely enjoyed my time with my favorite principal.  (As you can see from the empty plate, he didn't like the pie at all.) 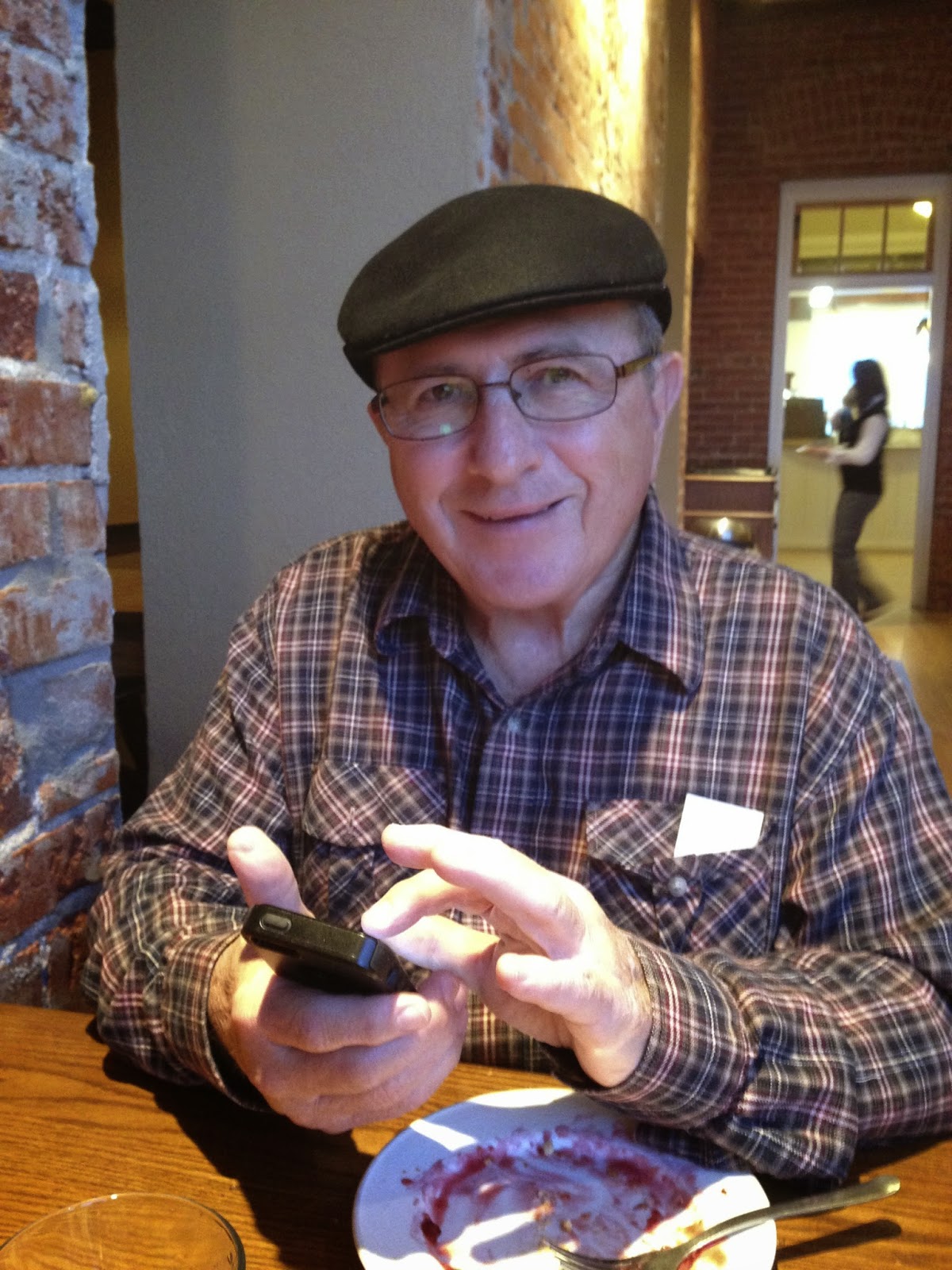 We have not made special plans for "Spring Break."  We had our break nearly two weeks ago when we went to Moab.  The time with family was invigorating in so many ways.  As I said in an earlier post, we went to Moab to watch Jim's daughters and son-in-law run a half marathon.

On the day of the race, the runners got up very early to get to the start of the race.  We slept through their leaving.  When we finally got up, my husband and I went downtown to have breakfast at an awesome cafe that my massage therapist had told me not to miss.  If you are ever in Moab, don't miss going to The Love Muffin Cafe.  I had their Verde which is slow roasted brisket, home fries, cheddar cheese, two eggs, and chili verde.  My husband had their whole wheat waffles.  He was a bit jealous when he saw my choice, so thankfully, he ate half of it while I had a bit of his waffles.  I don't know when I've had better chili verde.

After we were through eating, we went to the finish line of the race to watch our runners come in.  I got  intrigued with watching all the other runners.  I loved their determination, their spirit, and the energy they gave to the rest of us.  Concentrating intently on trying to photograph a woman who was running in a tutu, I completely missed seeing Jim's son-in-law.  Then I heard his name being announced as he approached the finish line.  Oppps  I got the tutu wearing runner quite well, but I only got 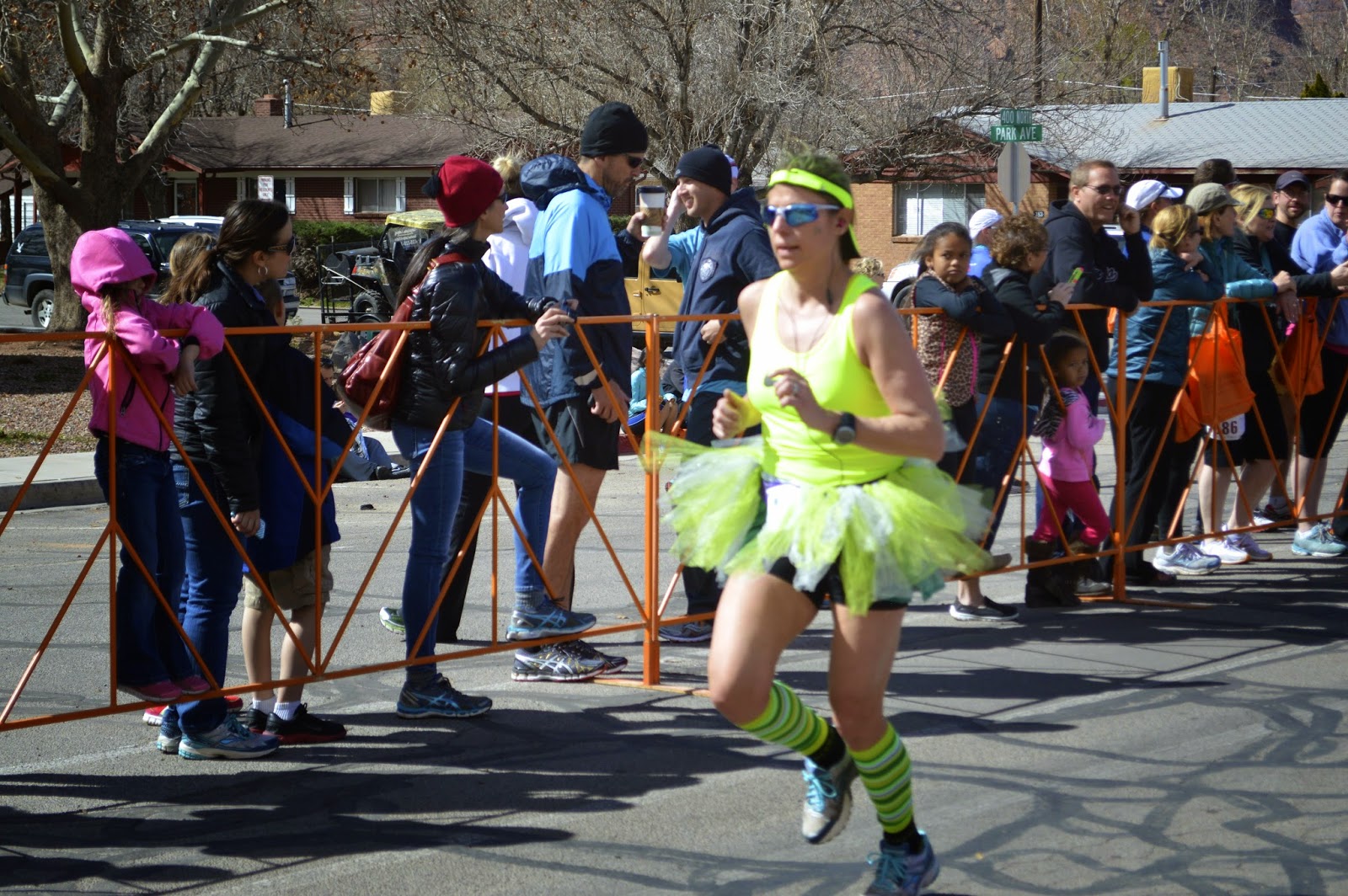 a photo of Brad's back.  There he is in green. 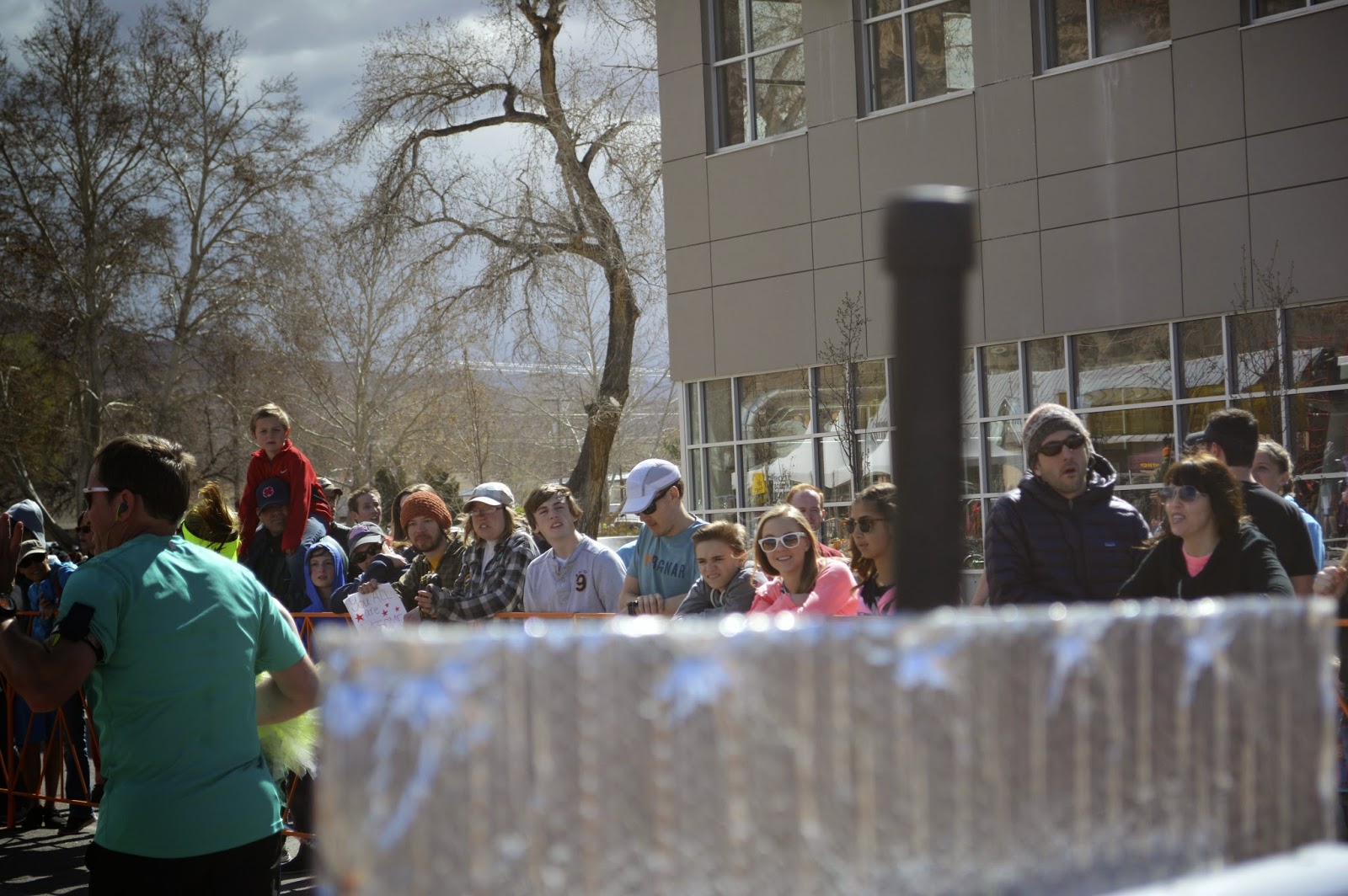 I did not see Jim's daughter Thia come in at all.  Soon, I saw Trinette.  I recognized her body and her run and knew it was her long before I could see her face.  (She is toward the right side of the photo dressed in turquoise.) 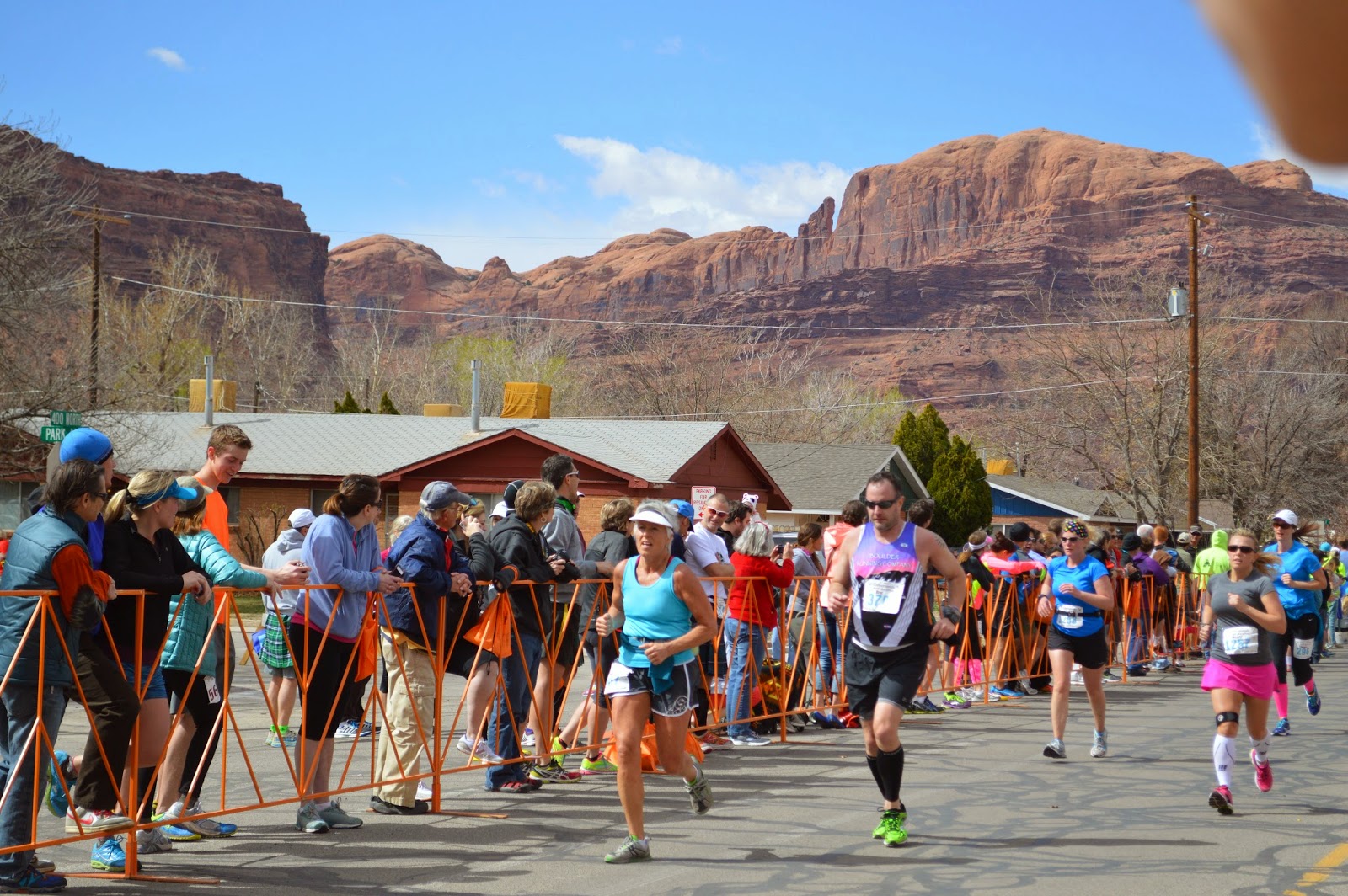 Soon she was in front of me.  Cheering wildly, I told her to smile for me.  She smiled and kept her eyes on the finish line. 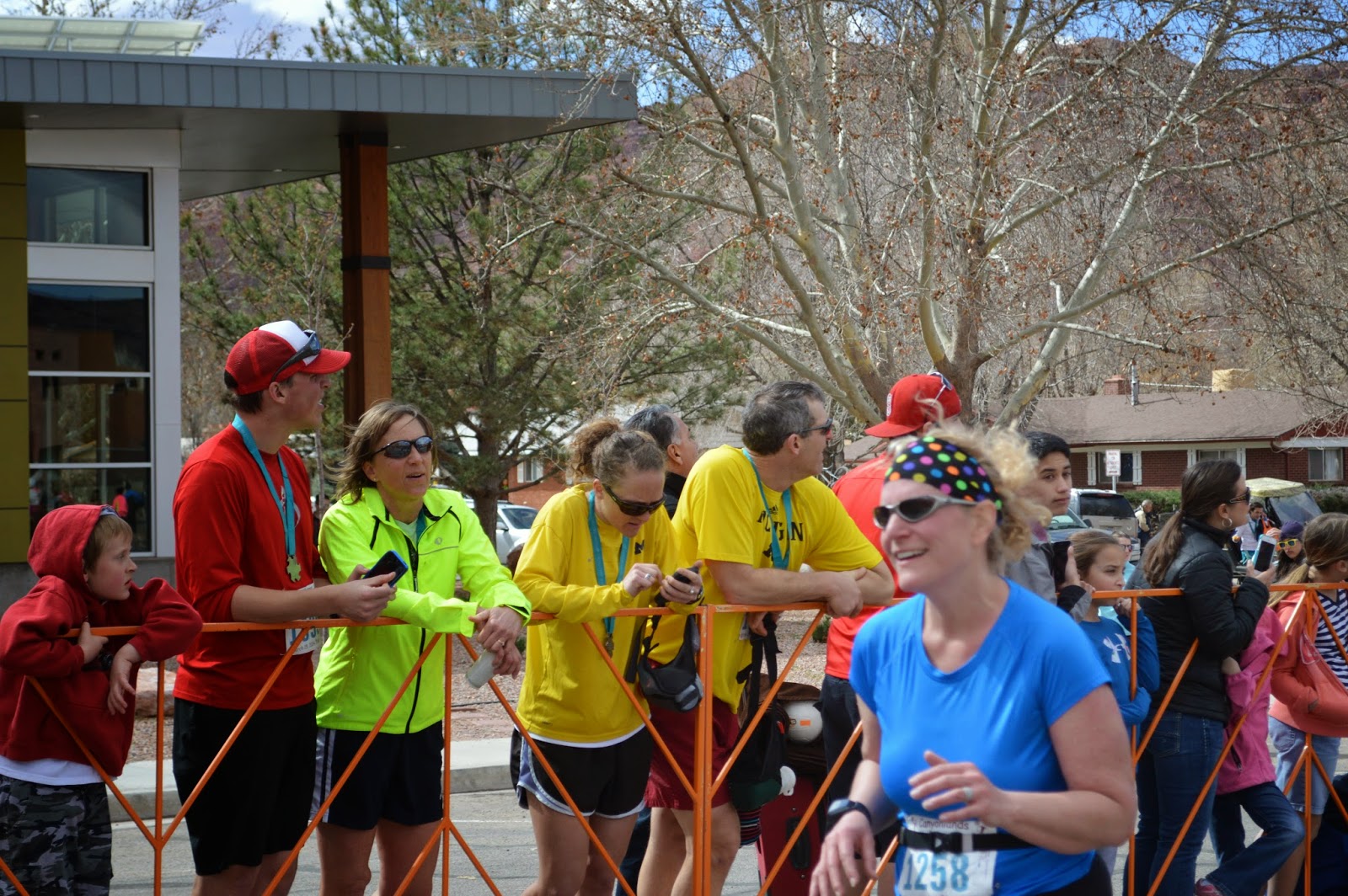 Here are our awesome runners:  Thia, Trinette, and Brad. 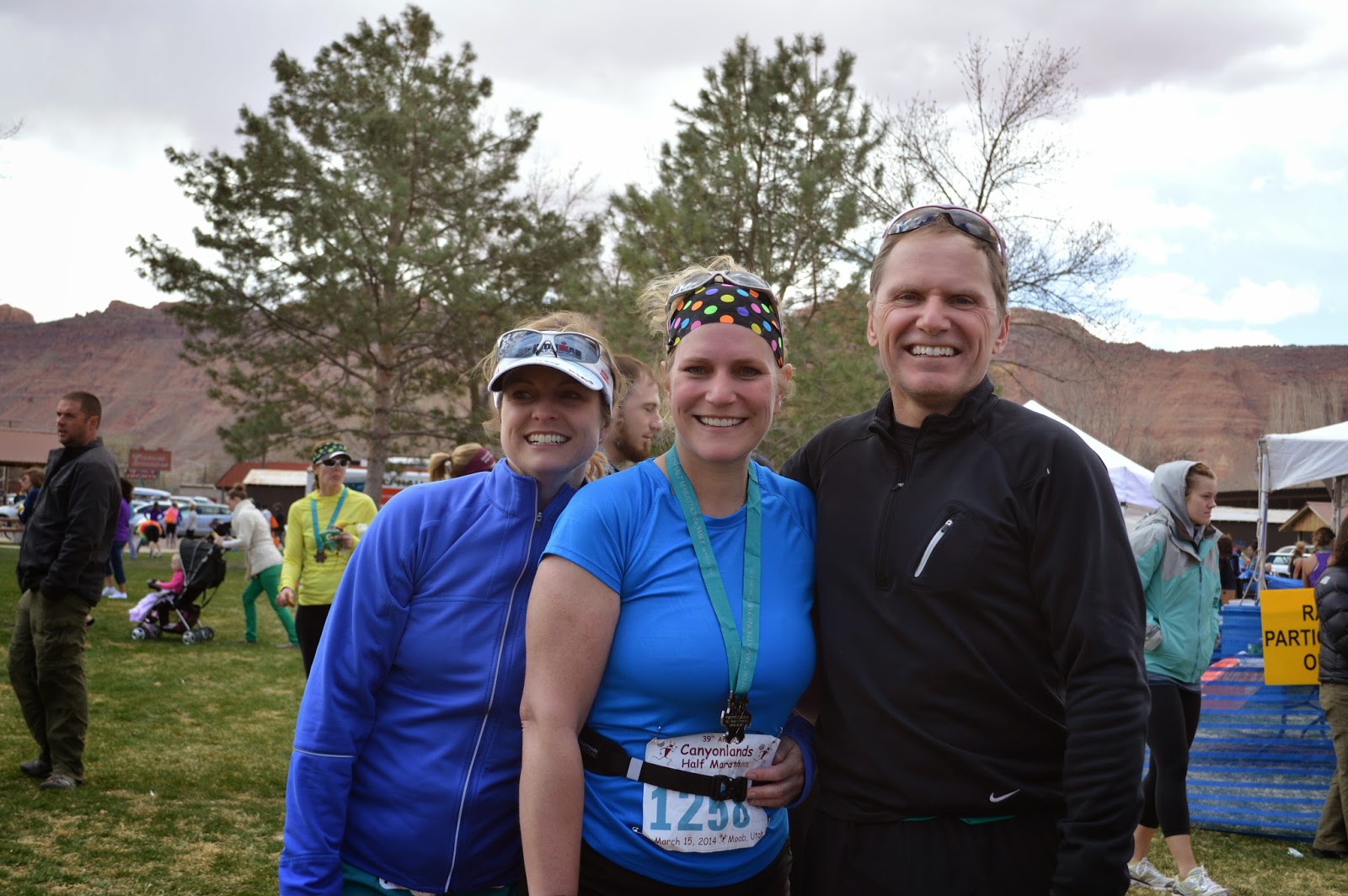 Here are the runners and the fans that came to cheer them on.  I sure hope they run this race again, and I hope next year my kids can make it too.  It was so much fun. 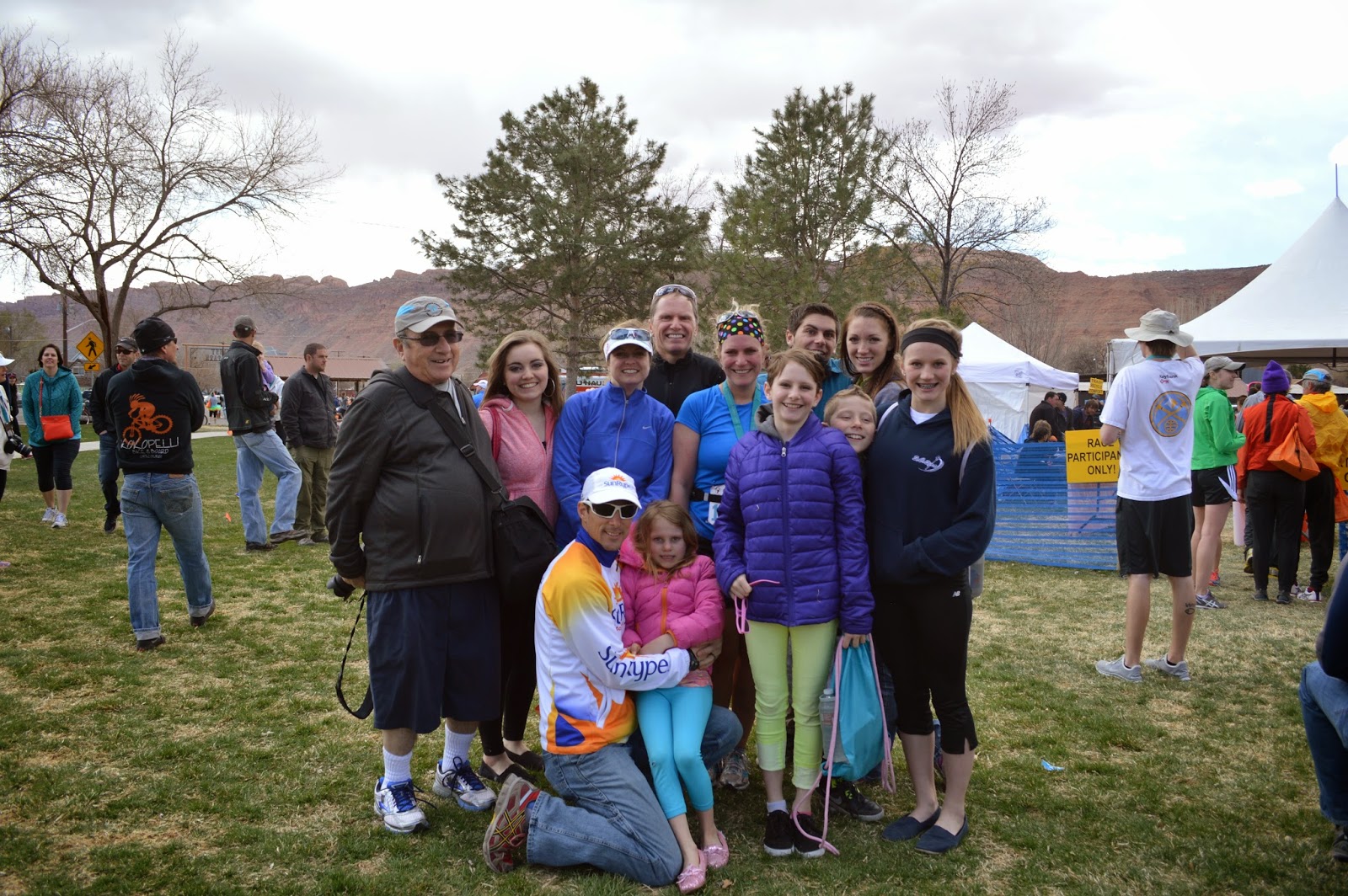 The runners were tired, but they wanted the kids to have some fun, so we all drove up the canyon along the Colorado River looking for a campground called Hittle's Bottom.  Brad told us the legend of how this place got its name.  It goes like this:
It seems that many years ago in pioneer times, Hittle, a young girl, was trying to cross the river and got stuck in the mud.  Those around her were able to toss a rope out to her.  She placed the rope around her waist.  Then, the other end of the rope was tied to a horse.  The horse pulled the rope.  Horror of horrors, poor Hittle was cut in half by the rope.  They never found her bottom.  It is still in the mud.

Poor Hittle.  We never made it to the campground, and we never found her bottom either.  Instead, because the wind was just terrible, and because the kids were tired, we stopped at a beach called Sandy Beach.  (That's a very original name, don't you think?)  We piled out of the car to play in the sand and toss some rocks in the river.  My true love and I did not make it to a sunny beach in Hawaii this spring, but we did make it to a beach. 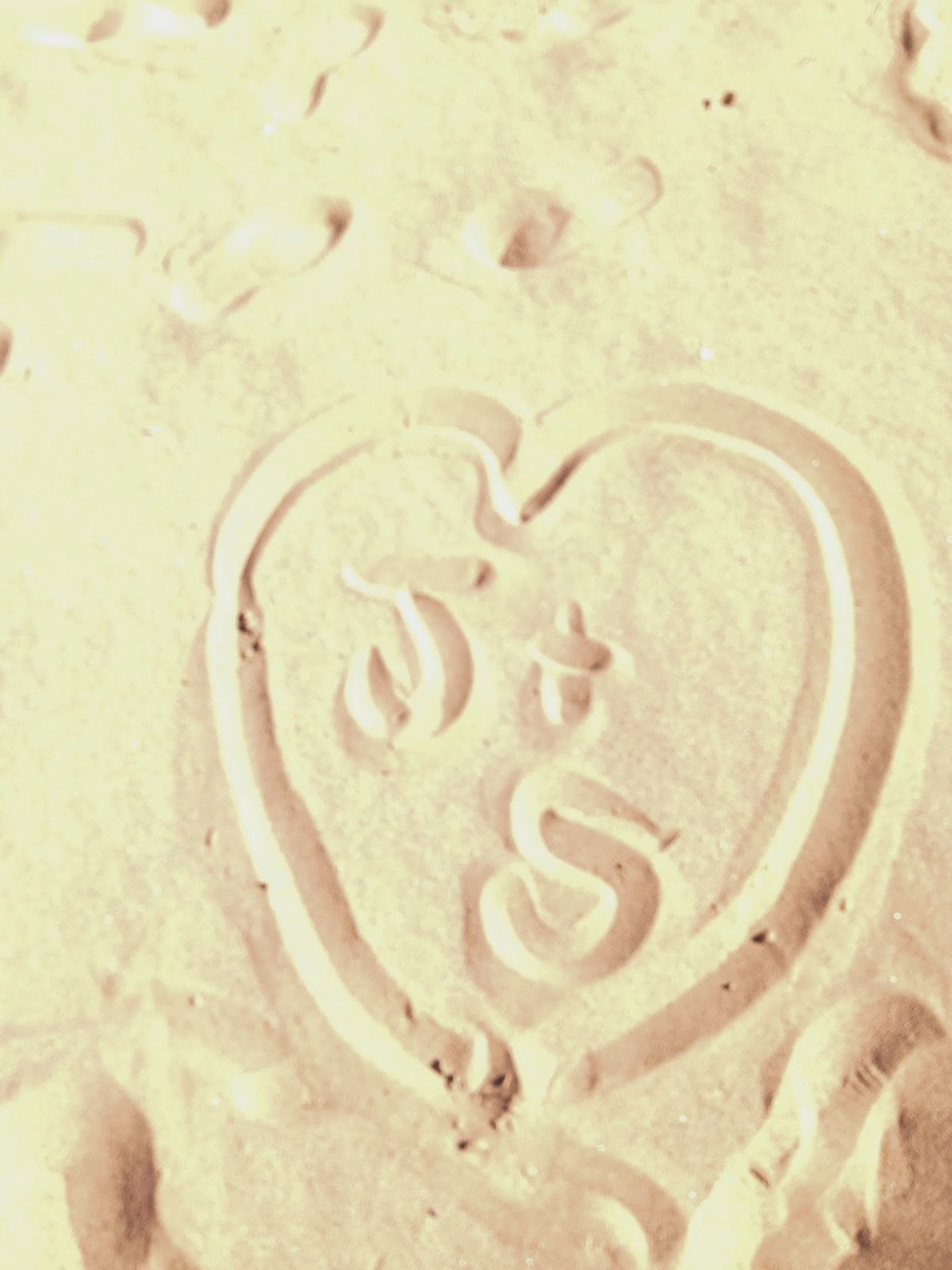 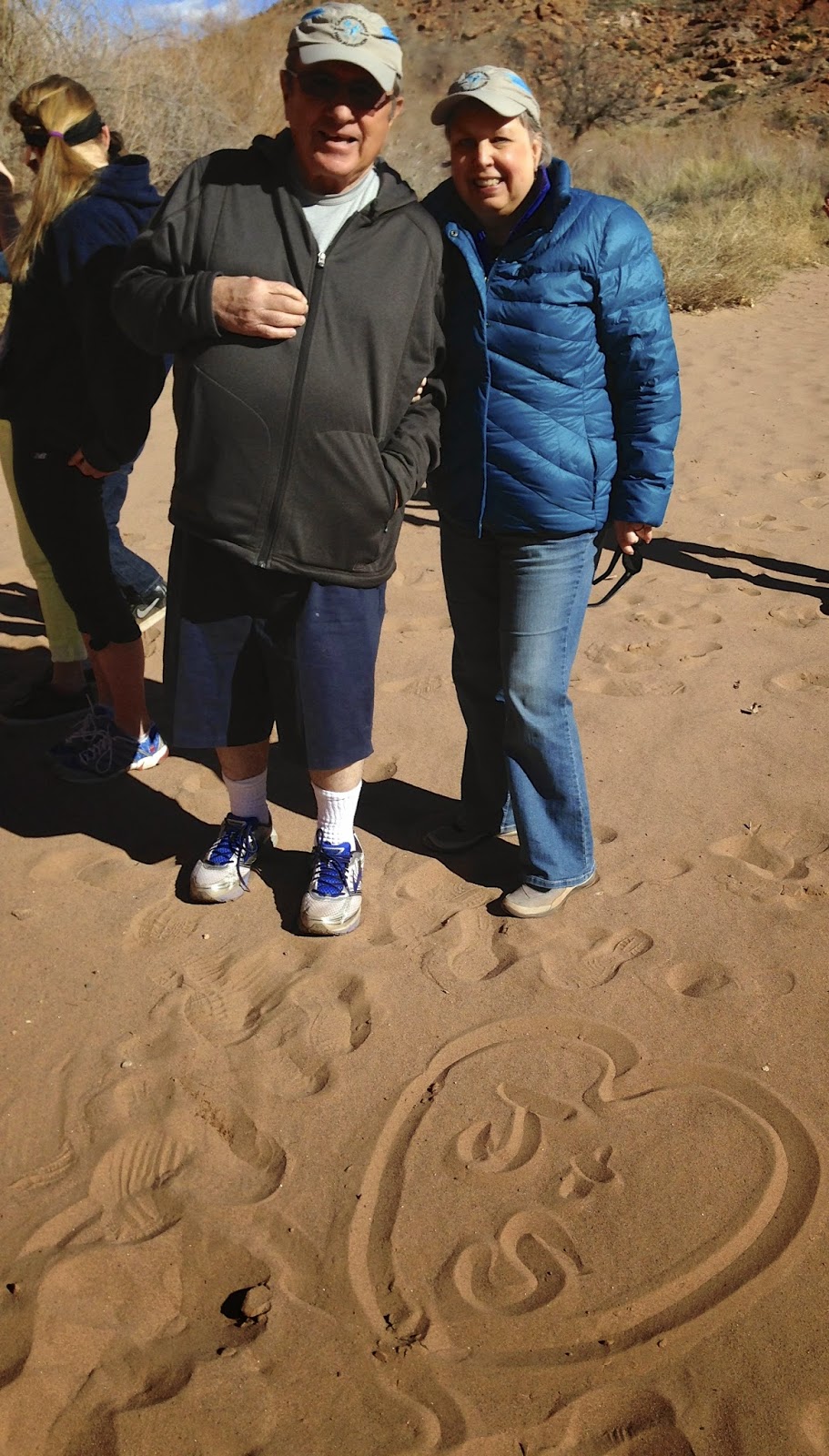 I celebrated making it to a beach by lying in the sand.  Yes, I have a parka on, but it was sunny in this spot, and it was much warmer here than it was at home. 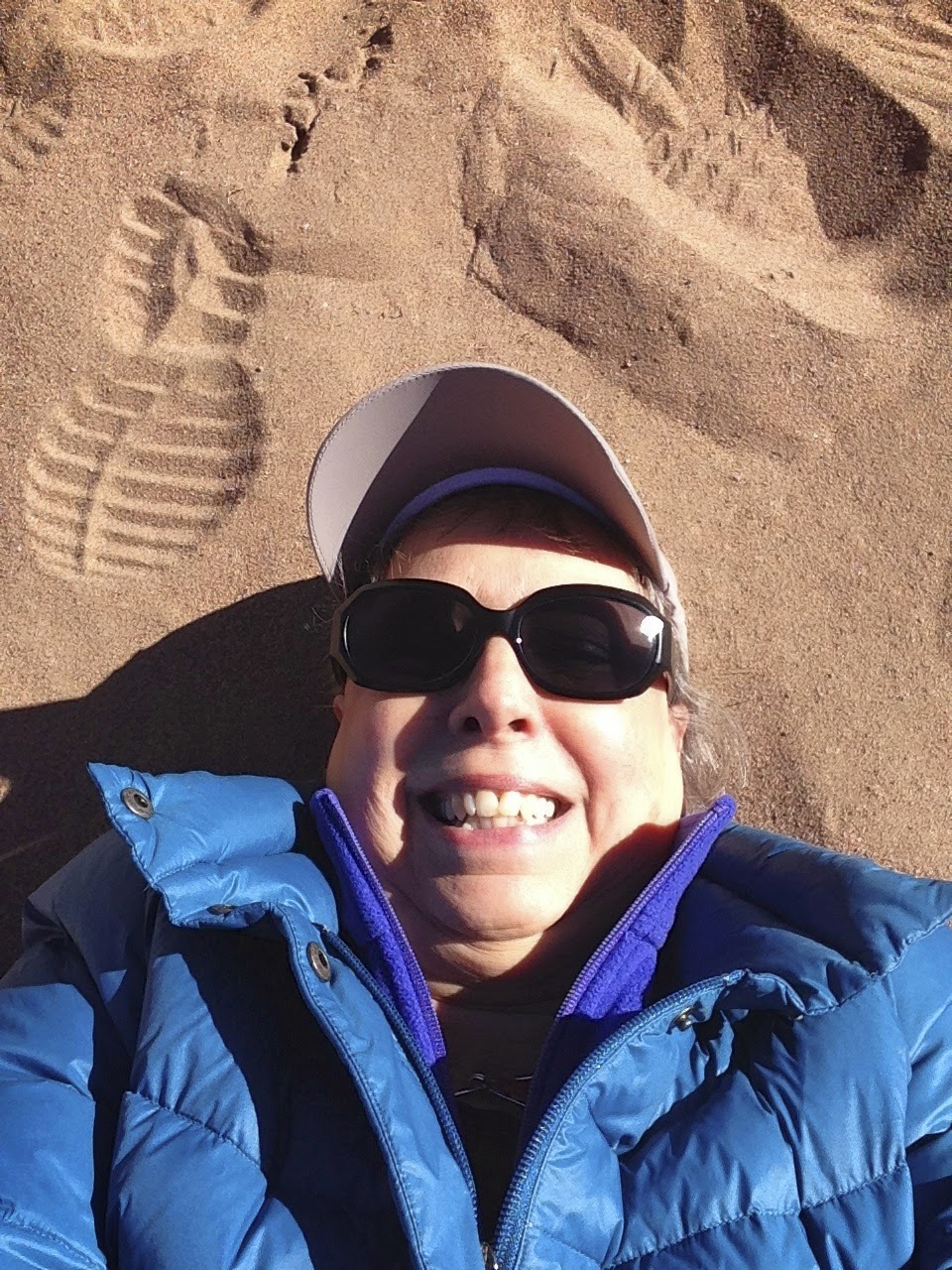 That evening, my husband and I left the runners and the rest of the family and drove back to Grand Junction, Colorado about one hundred miles away.  I had promised my mother I would return that evening in order to take her to church the next day.

After church, my husband and I took my mother to lunch.  I want you all to see this amazing mother of mine.  She will be 98 years old in May.  She lives on her own and gets around very well.  She is as sharp as she ever was. The next day was St. Patrick's Day, so she is decked out in her green.  We went to three different restaurants looking for corned beef and cabbage.  No one was serving it until dinner time.  Since we wanted lunch, we ended up having fish and chips instead. 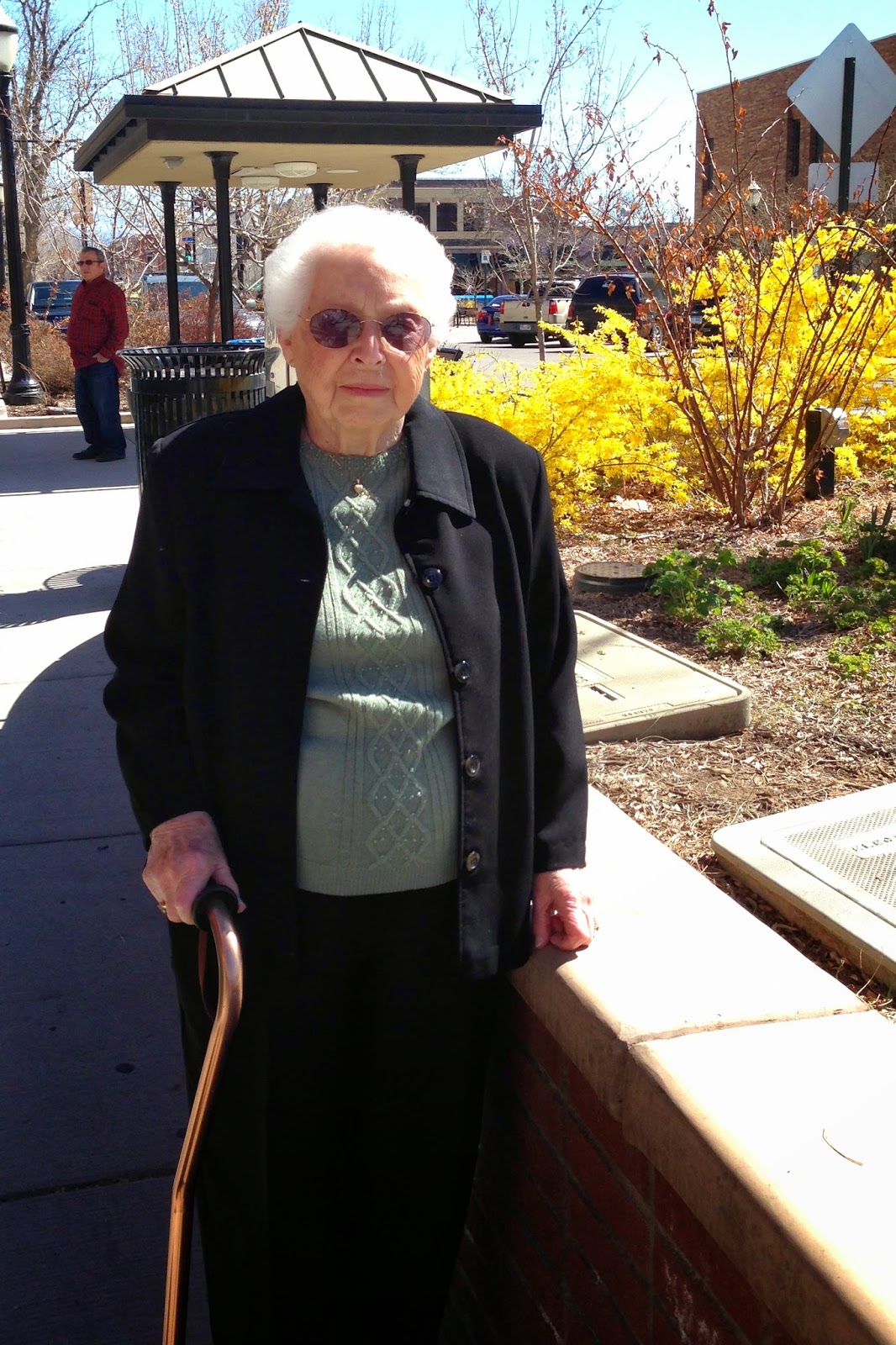 I need this time away from home when we went to Moab.  I think my husband and I both did.  We needed to have a change of scenery.  We needed to be with family just having fun.  I was hungry for the sight of flowers.  Thankfully, I got to see the daffodils blooming and the forsythia in bloom.  I needed to feel the sun on my face. 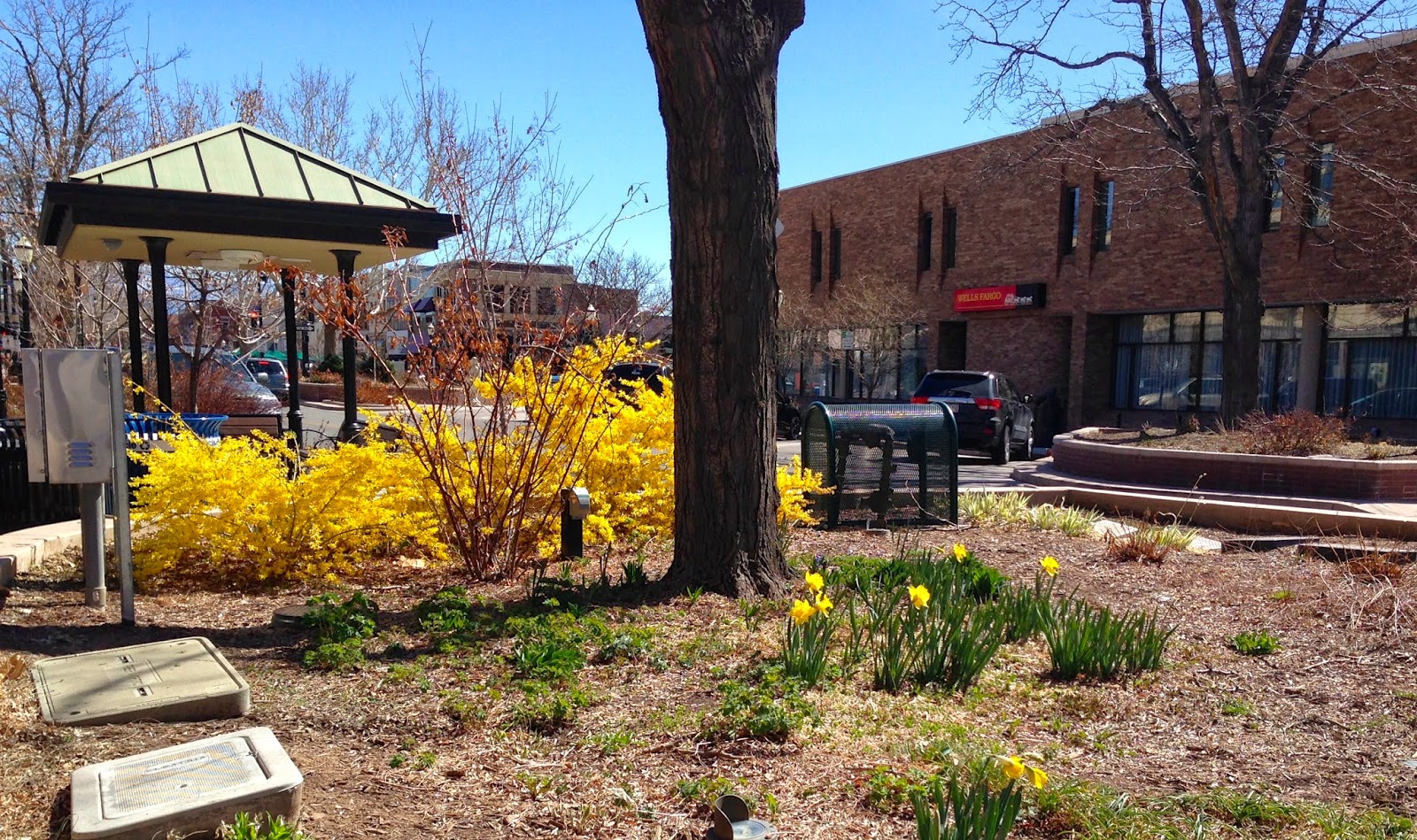 Mostly, I needed to remember that the race is won by those who endure the path set out for them.  The path may not always be down hill, in fact it may be up hill a lot of the way.  The wind will not always be at your back, but somehow, the runner finds a way to keep putting one foot in front of the other despite limitations.  My sweet daughter by marriage wondered what her running time would be like if she didn't have asthma.  She said she had to use her inhaler on the race.  To me, I am just amazed and proud that she ran at all with or without a limitation.

I've learned many lessons from my mother.  At nearly 98, she says her legs don't work like they used to work, but look at her, she is still walking.  She is still involved in life.  She is healthy.  She laughs like she did when I was a girl.

I think the secret to a long and happy life is to keep on the path. Keep the faith.  Always hold fast to the hope that is within you.  Each winter of my life has come to an end.  Each spring, I have seen my beloved daffodils bloom.  They symbolize rebirth to me.  Thankfully, again, spring has sprung.
Posted by Sally Wessely at 10:28 PM 22 comments: