Blogging ~ Who Is My Audience?

Of course that is the question...In the early days of my blog, sometimes I wondered why I continued to write it.   One of the first questions I had as I began to write was: Do I write for an audience? I concluded that this was a question that did not have just one answer.

As I sorted through why I started this blog, I came up with reasons. Here are some of them.

I have always enjoyed writing and have kept various types of journals over the years. I kept sporadic journals when my children were small as an attempt to just try and keep some sort of record of what life was like during that period of my life. I didn't really have an audience in mind when I kept those journals, but they were often more than just some sort of daily log of experiences. 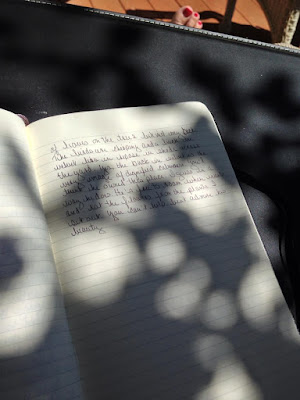 I wish I had been more disciplined in my journal attempts during those days because now, I do have an audience for what I wrote during those busy, hectic times: myself and possibly my children.

Many young moms began blogging when I began blogging. They created fabulous blogs full of wonderful pictures of their children. They were pretty blogs filled with flowers and flowing designs. They represented the technological gifts that this generation of moms have developed. I envied these young moms and their blogs because they will have a precious record of their lives with their children. What a gift and a blessing. What I wouldn't give to have the same type of archive of my children’s' activities when they were young.  I often wondered if these moms were clear on the audience they were writing for.  Were they writing to leave a record?  Were they writing for other moms?  Were they writing for parents living far from where they lived?

Writing for An Audience

When one writes, the audience does not always present itself immediately. We write because we have a need to record our lives. We write to express our dreams, our needs, our disappointments, our heartbreak, our insights, or even as a means of trying to make sense out of what is going on around us. Writing is intensely personal, and for that reason, we are sometimes hesitant to put down our most intimate thoughts and emotions on paper because we fear an unknown or known audience. Audience can intimidate us and cause us not to write or not to write well.

When I reflect back on the time I was teaching high school English, I now see I might have confused my students when I taught about audience and writing. I would tell my students that they did not need to consider audience when they wrote in their journals. In fact, I encouraged them not to think about the reader while writing. I told them that they were just to write. They did not have to worry about punctuation or spelling or any other grammatical rules as they wrote in their journals. I just wanted them to feel free to write without being intimidated by feeling that they must write perfectly if they were to write at all. I told them to focus on developing voice.

Many of my students would write stunning journal entries. They would amaze me with the uniqueness of their individual voices. I would get glimpses into their true selves through their journal writing. Sometimes, I would be heartbroken by what they had to share. Sometimes I would be alarmed. Always, I was grateful that they trusted me enough to write transparently and honestly when they knew I would read what they wrote. I was their audience, and they trusted me enough to write honestly.

Other times, when the students had a writing assignment, I would teach about audience. I would remind them that they should consider their audience when they wrote. Unfortunately, many times, these formal writings lacked an ability to touch any type of audience. They became stilted, boring, and seemed to only represent some sort of stylized writing that came about from trying to follow the form style writing that they had been taught in previous years of schooling. This writing would lack life. It might be perfectly representative of a five-paragraph essay, but it lacked true meaning. The concept of writing for an audience was difficult for many students to grasp.

Can We Ever Fully Anticipate How Our Writing Will Impact Our Readers When We Sit Down to Write?

On that test, my students had to respond to Li-Young Lee's poem, "The Grandfather." Their audience was:  me - their teacher. Their purpose was: they wrote to get a grade. They clearly understood their audience and purpose.

Interestingly, after all the responses were read, the grades were assigned, and I had left my role as teacher to drive to my father's bedside to become a daughter who only had a few more days to spend with her father, I found that my focus as an audience who had read assigned poetry responses shifted. I found myself recalling the poem, and even more importantly, I recalled the responses my students had shared with me about the poem in their responses on the test.

Their words began to comfort me. They gave me strength. They allowed me to peacefully surrender myself to the moment I found myself in at my father’s bedside. I saw these last moments with him in a new way as I reflected on all my students said about “The Grandfather,” and about the poem itself.

I realized the power of the written word in a unique way. The freshness of my students' youthful responses that spoke of the value of caring for the elderly grandfather while treasuring his final stories spoke to me. I will never forget how comforting my students’ words about the last days with a grandfather were to me. Neither my students nor myself had any idea how those words would be remembered by the reader who first read them as a teacher and remembered them later as a grieving daughter sitting by her father’s bedside as he lived his last few days.

Blogs that are successful, seems to require audience. One would not continue to blog very long if one did not have some sort of audience. In the beginning days of blogging when I first began this blog, one of the beauties of the blogging was the ability to have a place where one could post something that could generate an immediate response if it was read by anyone at all.

When I first began the blog, for months it seemed the jury was still out on how long the blog would last. I was not sure of the benefit of the blog except for serving as a place where I could create a bit of a history of what was going on in my life at the moment.

I was newly retired. I struggled with my new status at times. I missed the academic life, and yet I was also happy to leave the daily demands of it behind. I missed my students. I missed the interaction. I missed my audience. That is one thing a teacher always has - an audience. As I used to say, "Just give me a stage!"

But, I also thought that my classroom was a place where we were all learning together. I liked to think that I created a more generative, constructivist type of classroom. It wasn't just like the classrooms where I went to school. I always hoped to create a classroom that was interactive and interesting.

Certainly, if a blog is going to be successful, it must be all of those things too. I have loved blogging.  I have decided to make a shift in my blogging experience.  This shift will occur next month when a new blog is launched.

In the meantime, I am gathering ideas to inform my blogging experience.  This is new territory for me, but so was blogging when I first began writing.  One thing is for sure, I am learning all kinds of new things about writing, about audience, and about what goes into blogging in 2019.  Things have changed since 2008!  That is for sure.