Did you know there are books to study for everything these days?  My students want to study for the TOEFL (Test of English as a Foreign Language).  They also want to read children's books in English to practice reading, so today I stopped by the local branch of the library to set up a visit for my class. 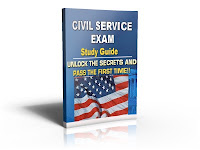 I took the Federal Government Civil Service Exam in January of 1966.  I had just left college before completing my degree in teaching.  I needed a job.  Since we lived in a highly impacted Federal employment area, my father's assistant suggested that I go to the post office and sign up to take a civil service exam.  Desperate to get a good paying job in order to earn enough money to return to college, I took her advice.  I remember getting a notice that several registers were open for hiring, and those interested in getting a placement on the hiring register should report on a given date to the post office to take the exam.  I showed up for the exam without ever giving a thought about preparing to take it.  I don't even know if there were any sort of study guides back in those days.

I do remember that the test was given in a large room filled with people.  We were told that there were few slots available for jobs.  We were then told that our scores would be listed on the registers for those jobs that we qualified for that were available.  Hiring would be done according to score.  The highest scoring applicants would be called first.

A few weeks later, on February 14, 1966, I was called and asked to report to work for the IRS.  I had passed the test, and there was a position within the Internal Revenue Service in Ogden, Utah, where I was living at the time, that I qualified for.  I reported to work just as I was requested to do.  It took several days to sign papers and take some basic training before I actually found out where I would be assigned.

Then, exactly 45 years ago today, on February 16, 1966, I was finally working in my new department. I was assigned to work in the batching and receiving department.  It wasn't very glamorous.  In fact, I wonder why I had take an exam to get the job.  My title was:  numbering clerk.  Yes, I, and about four or five others,  had to stamp every page of every tax return that we received through the mail with a DLN (document locator number).  This was all done by hand!  And, we had to stamp a certain number an hour and batch them into batches to be sent to tax examiners.  I think we were working on stamping and batching 1040A forms on this particular day.

The job would have made a young girl who had a few years of college under her belt and a dream of being a teacher in her heart crazy except that on that particular day, all these years ago, a young, good-looking, charming, and funny guy was also hired to work beside me.  It turns out that we had tied for the top score on the exam.  We both had to be placed before any other additional hiring could be done.  Yep, we tied for first place on the civil service exam.

Six months later,  this same new hire became my first husband.  I guess it was fate that we both took the test on the same day, got the same score, and were hired on the same day.  If it were not fate, it at least makes a good story.

We both went on to leave the civil service world a few years later.  In time, we both became teachers.  We also gave birth to five very bright and beautiful children.  We had many good years together and some bad.  We later divorced.

Who could ever have known what would come from taking a civil service exam and scoring the exact same score as another person.  I wonder what would have happened if one of us would have studied.
Posted by Sally Wessely at 8:30 PM 15 comments: