New Life In The Neighborhood and A Health Update

Just outside my window as I type this post, I am watching a mama robin sit on her nest.  It is hot out there, and I watch her open her beak as if to take in a big breath of fresh air.  I've watched her for several weeks now.  She is my little friend.  I admire her patience as she sits on her eggs.  I say a little prayer of protection for her and her babies.  It is a rough world out there. I think the crook of the tree where she chose to build her nest is rather safe from snakes, but I worry about about one of those magpies that live around here robbing her nest.  I've also read that deer will eat the robins eggs.  Thankfully, the deer can reach her and babies high in the tree.  I guess she knows the dangers of the world out there, but I just hope for her safety while she living right outside my window. 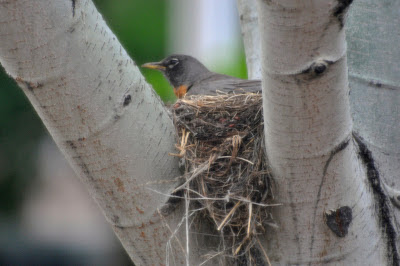 I've always been partial to robins.  I usually note the first sighting of their return in early spring,  I love listening to their songs outside my window in the morning.  For some reason robins never annoy me when they awaken me from sleep before I am ready to see the dawn of day.  Perhaps this fondness for robins began when I was a very young child and our neighbor taught me to sing and play a few notes on the piano of the song, When the Red, Red Robin Comes Bob-Bob-Bobbin' Along.  Do you remember that song? If not, enjoy Doris Day singing this wonderful old song by clicking on the video below.


I digress...
I've gone from writing about the robin nesting outside my window to Doris Day singing an old favorite.  Let me try to tie all of this together: I expect to find my sweet Mama Robin sitting on her eggs outside my window, or I see her around my bird bath, or at times, she is on the roof of the house next door.  The other evening, she landed on a flower pot on the railing of the deck, then she spotted Boston at my feet, and she quickly turned tail and flew off.  She is the one new mother I am most familiar with in the neighborhood.

A few days ago, I finally spotted one of the new mama doe in neighborhood. While drowsily opening the blinds one morning this week, I was surprised to see this mama and her two fawns grazing in my backyard.  I knew there was no time to run for my camera, so I grabbed my iPhone and opened the back door to take a photo.  Immediately, Mama Doe and her fawns scampered off.  I did catch a quick photo before they disappeared.  I knew that we had two new doe moms in the neighborhood, but this was my first sighting of the babies.  The moms had given birth a few weeks ago in the forested area behind our neighbor's house across the street.  I have to say that I was quite excited when I saw the fawns in my yard.  They are so cute.  Sometimes I get frustrated with the deer because they eat everything in sight, but they can be a joy to watch also.  My nephew visited from Texas this past week.  He had been touring Colorado and had not seen deer until he drove into my neighborhood.Today, one bold mom was right up on my front porch, right next to the front door, eating my pansies.  I guess she was deadheading for me. 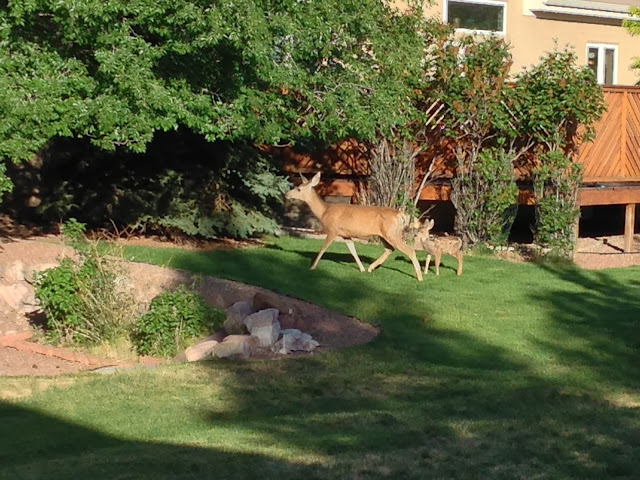 Day before yesterday, a mama bear and her two cubs were in the neighborhood.  I wasn't home at the time, but my husband was.  A passerby told him they were up the street in the forested area behind the houses after walking through the village itself.  Jim drove up the road and was able to catch a photo with his iPhone.  (What would we do without these?)  I promise you that there is a bear in this photo.  She is behind the tree that is just right of the center of the photo. 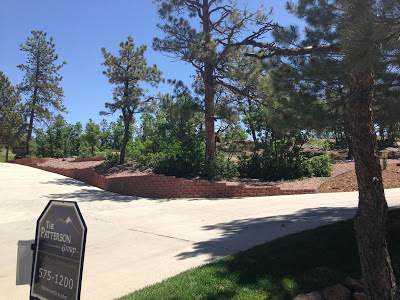 I reminded Jim about how disappointed he was as we left Yellowstone Park a number of years ago because we had not seen bear.  Then, just as we were leaving we saw one.  I don't know when I've seen my husband so excited about seeing some sight in nature.  He said he was just as excited when he saw this mama bear and two babies just up the street from our house.

The final sighting that we have had in the last week and a half will not include a photo.  We have a photo, but I will spare you as some folks just don't like to see snakes.  We were working in the garage when I happened to look down at my husband's feet and saw what I soon realized was a rattlesnake, a baby rattlesnake.  I yelled out, "There's a snake."  My husband just looked at me with a strange look on his face.  Again, the warning came from my mouth, "Snake, there's a snake.  Get a shovel and kill it."  After nearly stepping on the snake, my husband saw what I was talking about and grabbed a shovel to kill it.  I was pretty certain it was a rattler but didn't want to look too closely until the thing was dead.  I asked him to take a picture with his phone so I could compare it to photos of rattlesnakes.  I asked if he got the head, and he said he did.  Unfortunately, again, my husband must have misunderstood.  He did get the head severed when he killed it, but did not get a photo of it.  I am 98% sure it was a rattlesnake even though there were not rattles.  I saw what appeared to be a button for future rattles.  The head and the markings convinced me that it was a rattler.

Now, as you can imagine, I don't want to go out and work in the yard in the new area that I wish to do some plantings.  The area is along a rock ledge and I keep thinking a nest of rattlesnakes must be nearby.  They like rocky outcroppings and have been known to frequent the natural rock formations just across the road, but no one has ever seen a rattler in the village where we live since the homes were built in the late '90's.  Let's just say that I am keeping my ears and eyes open and alert when I am out watering or planting.

We lived in the arid dessert of Pueblo for years and I never saw a rattlesnake when I know they were seen in some neighborhoods in our old stomping grounds.  It took moving to the foothills of the mountains to be this in touch with nature.  We all may be retired in this little neighborhood, but no one can say that there isn't a whole lot of wildlife going on here.

A week ago today, I had an EUS, or endoscopic ultrasound, at the University of Colorado Hospital.  After meeting with the specialist the day before, it was determined by the doctor and by me that the risks of doing the procedure to determine if I had sphincter of Oddi disfunction were great enough to rule out doing the procedure.  He did not believe that the medical record, lab results, and symptoms warranted this extreme procedure.  I had to agree.  At my age there is a 20 - 30 percent risk of causing any or all of the following by having the procedure done: a severed case of pancreatitis, diabetes, multiple organ failure and/or death.  I didn't like the risks,  Neither did he.  Instead, an EUS was done.

I guess I am becoming an old pro at having an endoscopy as this procedure was the tenth time I have had this done.  This time, last Friday, was the first time that an endoscopy included having an ultrasound.  The procedure takes about an hour.  During this time a fluid is injected and then samples of fluids are taken to be analyzed.

It is not a pleasant procedure.  As you can expect, I had a very sore throat and tender throat for quite a few days afterwards.  I also have had some pain that has kept me uncomfortable.  Thankfully, I did recover without any real side effects, and it appears that the findings bring good news.  There was scarring in the pancreas.  There is a pancreatic cyst in the pancreas.  I was diagnosed with chronic mild pancreatitis.  I will be followed by having an MRI of the pancreas and surrounding organs yearly.

It is a mystery to me why I developed this problem.  I am not and never have been a drinker of alcohol. I am not a smoker.  There is not a family history of such problems.  I blame the heart medications I have been on.  For now, I watch my diet carefully and avoid fats and other things that might trigger an attack.  I will baby my pancreas and avoid unnecessary medications.  I have never liked a pill being thrown at me to fix a problem in the body, and I guess I will be even more adamant about insisting that any medication I take is absolutely necessary.  When I do have pain, I will definitely take a medication I have for that called hyoscyamine.  I will also get blood work done to check on my lipase levels.

I realize that I have a condition that must be monitored, but I don't have cancer so for that I am extremely thankful.  I am also very thankful to have a wonderful team of doctors and nurses at National Jewish Hospital, University of Colorado Hospital, and here in Colorado Springs at the Gastroenterology of Colorado Springs who have spent so much time with me in person and by checking with me by phone. I cannot tell you how wonderful it has been to have their support and concern.  They have answered every question I have asked with great wisdom and have patient in listening to me when I talk.  At times, I would just as soon dismiss the symptoms, but I know that they won't allow this and have instructed me to get blood work done or go to the ER when they felt I really did need to be checked out.  Hopefully, things completely settle down soon in my digestive track and I can get on with the business of living.
Posted by Sally Wessely at 4:14 PM 28 comments: