Graduations and Grandbabies ~ Part I

When my grandchildren see me coming camera in hand, most of them run and hide.  I admit it.  I am obsessed with documenting the times I've had with my children and grandchildren by taking photos.  Since the advent of the digital camera, I have literally amassed thousands of photos of my offspring. My photos are sent to my computer to an app created by Apple called Photos.  These same photos are also stored in iCloud.  One feature of the app Photo is called "Memories."  Photos are collected in the memories feature of Apple's Photo app by date and appear on my Apple products in the Photo app nearly daily.  I am always fascinated to see what photos may appear each day with the title "On This Day."

Today, it was a treat to see photos of the day twelve years ago when my youngest son Jonathan and his wife Samantha graduated from the University of Colorado Colorado Springs (UCCS).  I've spent the remainder of the day thinking about these two and the incredible journey they have been on since the day they met.

Jonathan must have been seventeen, or maybe he was eighteen, when he started talking about Sam, this new girl he had met.  Then, one day, he announced that Sam was driving down to Pueblo where we lived from Colorado Springs to pick him up for a date.  Jon didn't have a car at the time.  I don't even know if he had a driver's license, but Sam obviously had both.  Jon was not attending high school; he'd dropped out.  He was in his phase of wear grungy clothes.  I was more than curious to meet this new girl in his life as Jon had never brought girlfriends around the house.  Did he ever even have a girlfriend before Sam?  I don't think so.

I think we were instructed by Jon to be cool with Sam and not ask too many questions of her because she was shy.  I think she died a thousand deaths when we answered the door because she had to do the dreaded meet the parents gig.  When the doorbell rang, it seems Jon ran to answer the door first because he just wanted to rush out the door without making introductions to save both of them from going through the formalities.  Of course, I wasn't having any of that.  I wanted to meet Sam.  Quick introductions were made at the door.  Sam was polite, and cute, and dressed very similarly to Jon.  I approved of her, but of course I would never say that to either one of them at the time.

As soon as Jon was out of the door, Sam turned and together they walked across the porch towards the driveway.  That is when I saw that they each had heavy chains hooked to their belt loops that were attached to a wallet in the back pocket of their jeans.  My husband and I turned and looked at each other when we saw the way they both had those chains on their jeans.  "Soul mates." I said with a smile.  "I think Jon found his soul mate."

It was a number of years after that day, that these two graduated from college.  They had already lived on their own but together in New York, Austin, Texas, and then returned to Colorado Springs to marry and begin college.  Soon after they were married, they also had a child, dear Atticus. 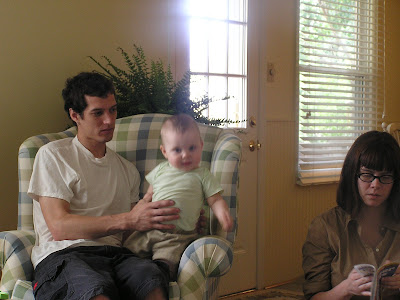 Those two had a lot going on in those years.  They were working to put food on the table, keep a roof over their heads, and keep a car running.  Jonathan mostly rode his bike everywhere.  They also attended college and that meant they were constantly studying and writing papers.  They also showed themselves to be fantastic parents who spent a lot of time enjoying and nurturing their adorable and bright son.

Those years were not easy as they plugged away and worked hard and earned those college degrees.  It seems hard to imagine that is has been twelve years since the day when they met the goal they had set and accomplished that milestone of earning their bachelor degrees.


Samantha graduated with highest honors and won a full-ride scholarship to work on her PhD at Northeastern University in Boston.  Jonathan was accepted to Boston College.  This meant that in the summer of 2006, we would proudly, but with sad hearts, send this little family of three off across the country to Boston.  Trips to see them and trips home to see us were not frequent, but at least we got to see each other as they continued their educational journey.

As part of the journey, Samantha was granted a Fulbright Scholarship to study in Bangladesh.  She gave up this prestigious scholarship to take a scholarship that would give her enough money to take Jonathan and Atticus with her to Bangladesh.

Boston seemed so far away, but it suddenly it seemed quite close to home when this adventurous and hardworking family took off to the other side of the world to Bangladesh.  They would live and study there for a year and half.  Atticus attended a bilingual French school while they were there.  They kept us intrigued with all of the stories of the adventures they were experiencing.

Once Samantha was finished with her research for her PhD, they returned to Boston from Bangladesh and were able to return to the same apartment building where they had lived before.  Since Jon had finished his MA at Boston college before they left for Bangladesh, he went to work as a researcher studying the effects of STEM (Science, Technology, Engineering, and Math) grants in education.  He worked closely with researchers at MIT and Harvard.  Samantha returned to finish her PhD at Northeastern.  She also by this time had published a chapter in an edited volume about sixties movements.

In 2014, Samantha and Jonathan moved to Scranton, Pennsylvania, where Samantha would begin her University career as a professor of history at Marywood University.  Jonathan was able to also gain employment at Marywood teaching sociology.  Their offices, like the two of them have been since they were teenagers, were side by side. 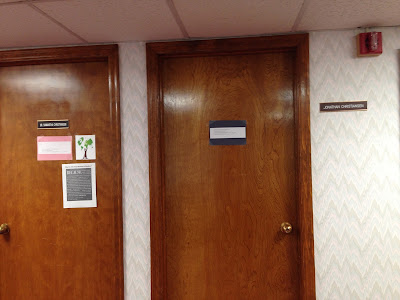 This past year has not been an easy one. Jonathan began working this past summer on his PhD in Binghamton, New York.  This has meant he has carried a full-load of teaching while also carrying a full load as a student.  He also drove an hour each way four days a week to get to and from  his classes in Binghamton.

The journey these two began into the world of higher education has been a long one and a hard one.  It has also been exciting.  Today, as I looked at those photos of my son and his wife graduating from college twelve years ago, I just shook my head in wonder at all that has transpired since that day.

Jon and Sam were both mostly raised by single moms and those two moms could not have been prouder of their two kids on that graduation day.  Those same two moms have missed these two kids and their son terribly as they've traveled the world and accomplished so much.

It has not always been an easy path that they have followed.  There has been a few rocks in their pathway, and quite a few twists and turns, but they have persevered and been successful in their academic, professional, and personal lives.

As a couple and as a family, Jonathan, Samantha, and Atticus are a pretty tight unit.  I think I was right the first time I met Samantha and saw her and Jonathan together.  They are soul mates.

As I said this past year has not been an easy one, but it has been so exciting because...

These two surprised us all with the most amazing news ever earlier this year.

News I could not share at the time, but I can now.

This couple has added to their family and presented me with my eighth grandchild!

Can you even believe how beautiful he is?  I know I might be biased, but I honestly don't think I've seen a more adorable baby in a long time.  Probably not since my last grandchild Atticus was born.  This grandma is over the moon.  I can't wait to see him!

True to form, Samantha gave birth to Leon on a Sunday night and returned to teach her classes at the end of the week.  Jonathan continued to teach and write papers for his program.  Thankfully, Grandma Rita flew out from Colorado to help these two with taking care of the new baby while she also kept meals cooked, dishes washed, laundry done, and got plenty of time to hold and love on this adorable baby.

Atticus now fourteen is getting to know his new baby brother. 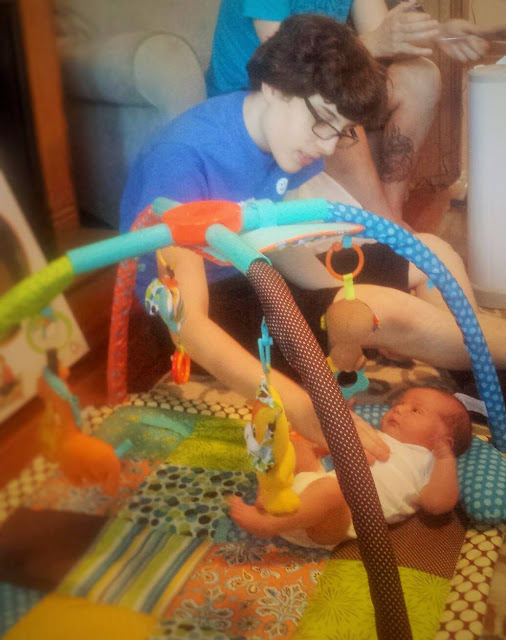 There is even more amazingly happy news.

They are coming home to Colorado Springs to live!

Samantha has been offered and has accepted a job as a tenure track professor at the University of Colorado Colorado Springs.  In August, she will begin working as a history professor in the department from which she graduated twelve years ago.  Jonathan will have to stay in Scranton another year to finish up his PhD, so this academic journey is not quite over for him.

Quite honestly, I am so thrilled with all of this good news that I can scarcely believe it.  Come August, I will finally get to hold this precious new family member in my arms while I welcome this family back home.  They will have come full circle since that graduation day twelve years ago.  I could not be prouder of them.
Posted by Sally Wessely at 6:02 PM 16 comments: