Highlights from My Week in Utah

For the past eight days, I spent some time with the Utah branch of the family.  Since four of my seven grandchildren live in Utah, it seems I never get to spend as much time with them as I would like.  They are all growing up way too fast.  It is a treat to spend a few summer days and nights with them.

A Trip to Salt Lake on the Train

A week ago Friday, my daughter-in-law, three of the grandchildren, and I took FrontRunner, the Utah Transit Authority train, from Ogden to Salt Lake City to meet my son for dinner before my granddaughter's gymnastics meet.  As a railroader's daughter, I jump at the chance to take a train ride.  The kids weren't as enthusiastic about the ride.  It takes too long in their estimation.  My daughter-in-law and I sat back and enjoyed the stress free commute that meant that we didn't have to have two vehicles in SLC.
We had dinner at a fun new restaurant in SLC's new City Creek development called The Blue Lemon.  (Click to read an interesting review from the Salt Lake Tribune.)  It was the perfect place to go for quick dinner for the family.  Not only was the food good, but the setting is fun.
My son wanted to show me the big development of this area that has been underway for the past few years, so after dinner, we crossed the street for a quick walk through the gardens surrounding the Joseph Smith Building and then back across the street again to the Zion Bank building so we could see the development from my son's office window. 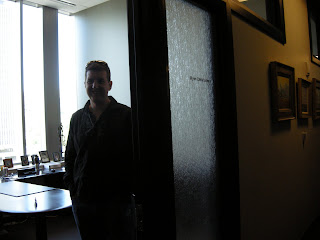 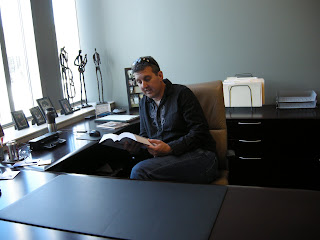 It is after hours, so my son is not in his banker's garb, but he did indulge his mother by posing at his desk for a photo.

Below is the view from his office.  Those of you who may remember Salt Lake City from the past will recognize this building as the old Hotel Utah.  It is now the Joseph Smith Building.  I once climbed out on the balcony near the top of this building through a window of a ballroom or banquet room with an adventurous boy friend.  That was long ago, but it makes for a good story to tell the grandchildren.  I doubt they believe me as I tell them the story. 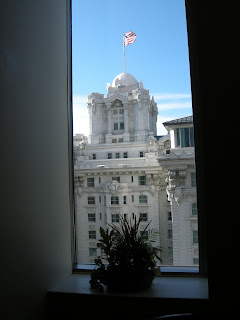 Our whirlwind tour of the Temple Square area is over quickly because we need to get to Miss Regan's State gymnastics tournament. 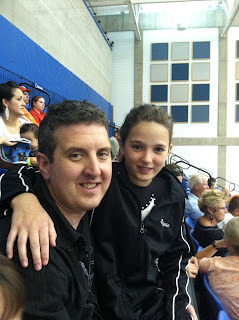 I didn't have a good camera with me to capture my granddaughter's events very well, but I was able to get a few shots to mark the occasion.
Since #1 grandson is 15 and has his learner's permit, he wanted to drive home.  For me, that was a stern reminder that my grandchildren are growing up way too fast.  Son Ryan decided that since it was dark, the car was full, and grandma, known for her reputation as a backseat driver, was in the car, he would be the driver for the trip home rather that Parker.
This evening was such a treat for me.  I have too few of such times with my family.  Even though Utah and Colorado are right next door to each other, it is at least a 14 hour drive from my house to my son or daughter's house.  A flight takes a little over an hour and a half in the air, but air travel also means a trip to Denver or Colorado Springs from my house and a trip to Salt Lake from their homes.  I try to suffice with at least a yearly visit, but always wish for more.
Posted by Sally Wessely at 10:45 PM 19 comments: