Home for The Holidays

This is not a newsflash for those whom know me best.  I was a frenzied mess before Christmas.  Nothing new there. The closer December 25th came the more I found myself eliminating from my mental check list the things I hoped to get done before Christmas.  There would be no baking.  There would be no cards sent out.  I may have written a Christmas letter, sent out cards, and done a lot of baking earlier in my life, but this year, I had to make some choices.  I only have so much time and energy, and I had to decide how to spend each.

The decorating of the house seemed to take me weeks.  I don't put up a lot, but it all takes time.  We have a small tree because space is limited in the living room.  One of my favorite things to do each year is to hang the ornaments on the tree because so many memories are associated with each ornament. 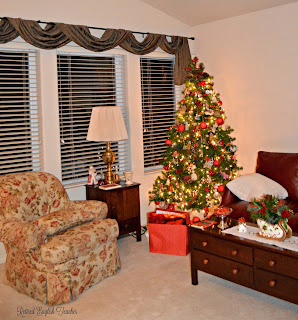 This year I added a few ornaments that I had made back in the 70's.  They had been tossed in some forgotten box long ago and had not been on the tree in at least twenty years.  My former sister-in-law had taught me how to make these.  I had crocheted around small round mirrors with metallic gold thread.  When I found a few of the remaining ornaments this year, I marveled that I had created them at all, especially when I considered that I was raising five young children at the time and had at least one of them in cloth diapers.  I wonder how I accomplished all that I did back in those days.  I think I put a lot more pressure on myself to do it all.  I remember I would sew nightgowns, and dresses, bake cookies, make candy, and do all the other Christmas activities that a mother of five children would do.  I was younger then.  I had more energy.  I also think I had unrealistic expectations concerning all that I needed to accomplish.  Thankfully, I am older and wiser now.  I do like having a few of these ornaments as a reminder of those days of long ago. 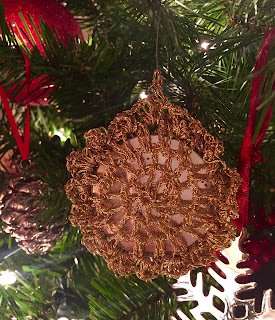 This year, part of the delay in decorating happened because a nasty virus hit me a few weeks before Christmas.  I seldom get colds or flu these days, so I was surprised when I woke one morning with a fever of 100.4.  After nearly eighteen hours of sleep, and the downing of many fluids, I was better the next day.  No one likes to be sick during the holidays, but I was especially disappointed at the timing of my illness as I had planned on hosting a party for group of my church friends for the next day.  That all had to be cancelled when I became ill.

It had been more years than I like since I had hosted a family Christmas celebration, so this year, I got my bid in early so that others would know how to plan.  Only three of Jim's daughters and their families were able to attend.  It seems that as the grandchildren become older, we are spread out in even more directions.

Jim and I decided upon our traditional Christmas Eve menu of Mexican food.  We had homemade (not by me) tamales, several cheese and chili casseroles, Spanish rice and homemade green chili.  Every year in the fall, we freeze a bushel of Pueblo green chilies.  We love to add these wonderful chilies to everything from eggs to grilled cheese sandwiches.  This year, my husband said I added too many chilies to green chili because it was HOT.  It was hot, but I thought it was just right.  (Others said it had a nice kick to it, so I guess it was ok.)  The downside to cooking with a lot of these chilies is that my hands were burning and so were my lungs from breathing in the fumes when I was chopping those green beauties.  After the first bag of chilies, I put on some plastic gloves. 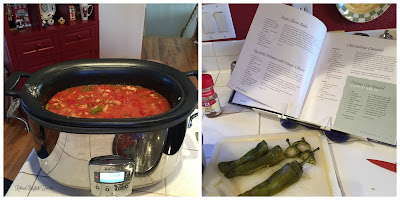 We also had ham and rolls and salad for those whose palates haven't grown accustomed to the hot chili flavors we enjoy.  When it came time to serve the food, things got a bit crazy, but somehow, the buffet we set up worked even if it wasn't very fancy.

Just before dinner, at sundown, Jim had us all gather in the dining room so he could light the first candle of Hanukkah.  He explained the significance of lighting the candle and spoke of his heritage and of his parents.  He then said a blessing for us all. 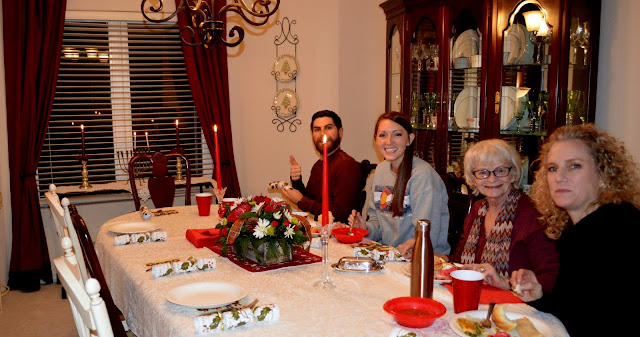 I snapped a quick photo of part of the family as they sat down to eat.  Later, I had to laugh at just how bad of a photo I had taken.  A candle seems to burn right on top of Caleb's face.  Obviously, our Christmas Eve dinner was eaten a  more relaxed style. With a cabinet full of china behind us, we chose to eat from paper plates.  My children imposed the paper plates routine a few years back for holidays other than Thanksgiving.  While I still wish we had a more formal table, it is so much easier with the size of our family to toss the dishes when we are all done eating.  Jim's former wife and her husband joined us for Christmas Eve celebration as is our usual practice.

In the kitchen, the grandchildren seemed to especially enjoy the holiday poppers that were a surprise gift at each place setting.  I love the paper crowns they all donned. 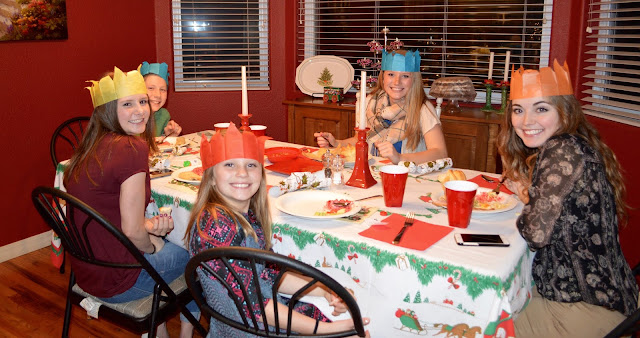 After dinner, we all went downstairs for a gift exchange.

Julie's tree that I decorate every year with her ornaments has a bit of a funny story this year.  I think she would enjoy the story of this year's tree.  I bought a live tree, as I always do, at the grocery store where I always buy the tree each year.  In her first years of college she worked for this particular grocery chain, and I know she always liked a live tree, so I buy an "elf" tree.  I quickly picked up a tree this year without checking to see how fresh it was and realized when I got it home it was already losing needles.  I put it up anyway, gave it some water, and planned to decorate it in a few days.  By the time I got around to decorating it, it was seriously dry.  I had Jim take it upstairs and set it out for with the garbage on the Monday before Christmas.  The garbage collectors left it.  I guess they thought it was a mistake that I set it out.  So, I stuck it in the garage.  Then two days before Christmas, I decided that I should rescue the poor rejected tree and decorate it after all.  I only turned the lights on for the time we exchanged presents because I feared it would go up in flames. 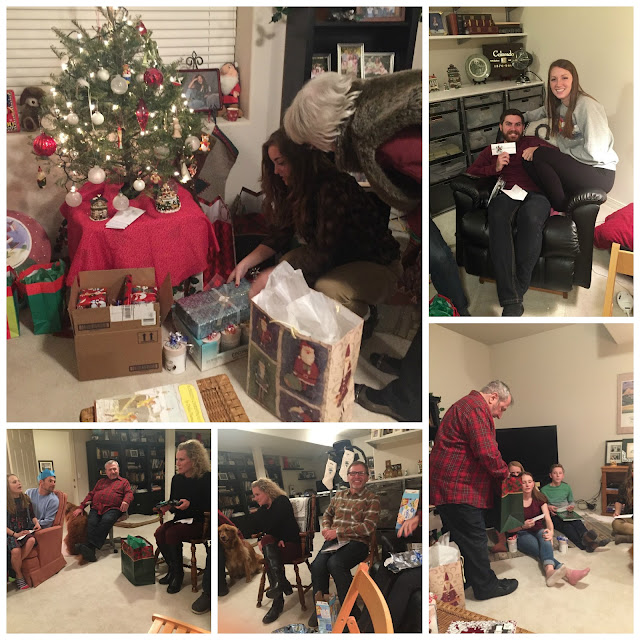 Upper right of the photos is one of the newly weds.  We were so happy to have grandson Caleb and his wife Rachel with us here from Ogden, Utah.  The middle photo typifies our Christmas.  Brad is wearing Jim's readers.  It seemed we were always asking if someone had a pair of readers one of us could borrow.  Jim just had cataract surgery, and for the first time since he was eight years old, he no longer wears glasses except to read.  The problem is, he can never find the readers.  It seems the children are also getting to the point where they need readers also.

Jim got an elliptical machine for Christmas this year.  It didn't come in his stocking, but it did provide a good place to hang his stocking. 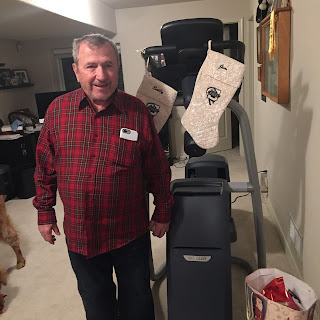 The guys all had beards this year.  Jim started growing one a few weeks back.  He hadn't shaved in a few days, and I said there was no reason to rush into anything and suggested he grow a beard.  He never has grown one before, so it has been a fun adventure for him to learn how to trim it.  He has a ways to go before he catches up with his grandson Caleb.

Back upstairs, the family waited for dessert. 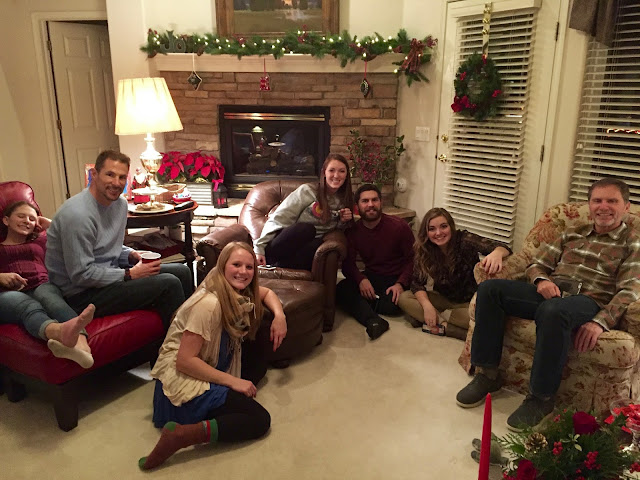 Thia, Jim's oldest daughter made the most amazing cake.  It tasted as good as it looked. 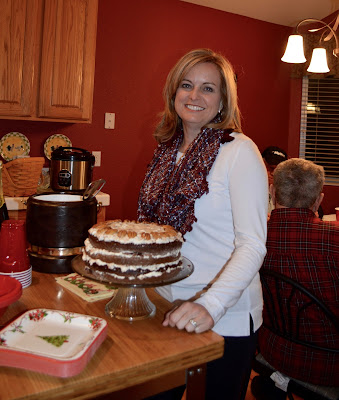 It was all over much too soon.

On Christmas Day, Jim and I attended church before we came home to eat a light breakfast and open gifts.  Amy, who had spent Christmas Eve at her own home with her children, came down to see us in the early afternoon.

Jim totally spoiled me this year with an Apple watch.  I was thrilled to get it and have really enjoyed having it. 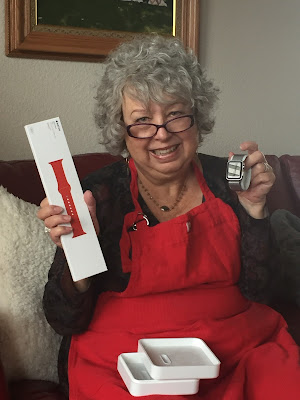 Amy brought me this beautiful bouquet for Christmas.  It seems that girl never fails to bring me flowers whenever she shows up for special occasion.  I so appreciate that about her.  She really outdid herself this time. 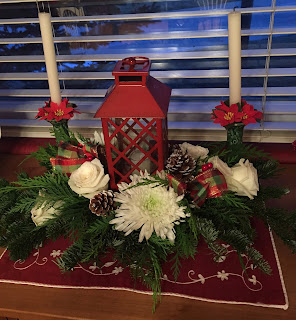 She wouldn't let me take her photo.  It kills me not to photograph my beautiful girl, but she just doesn't like me taking photos of her, so I honor that wish.  It was wonderful to have her with us.  She brought gifts, flowers, and her presence which was the best of all.  Her children spend Christmas Day with their father and his family.  Later in the evening she returned home so she could sleep in her own bed.  I can understand that desire.

Jim has been enjoying his elliptical.  He loves the way it mimics running as he was once a runner.  I think it is a great thing to have in the house because he never has time to go to the club to work out.  Here he is pushing himself to get back in shape in the comfort of his man cave.  The other bonus about working out at home is, in his words, "And I don't have to wear white socks." 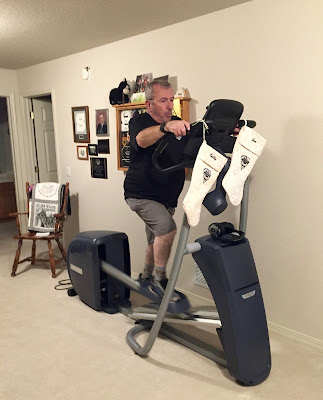 On the day after Christmas, as I walked from my office towards the main living space of our home, I was taken by just how grateful I am for all the blessings in my life.  Our home is a place of comfort and peace.  The best kind of evening is one spent at home with the man I love as we quietly read.  There is still just enough clutter left from opening Christmas presents, and from the dog's toys to make this home a place that is lived in.  It always seems a bit empty when the kids leave after a visit, but at this time in our life, we are so grateful to be living close enough to our children that they can drop in even for a short visit.  Jim always jokes that he "loves to see the headlights, but the tail lights are even better."  In truth, it is good to know our children have established their own lives and their own traditions.

After so many years of working long hard days, it is a true blessing to have quiet peaceful evenings at home.  Tonight we had thought of going to a movie, but preferred to stay home. 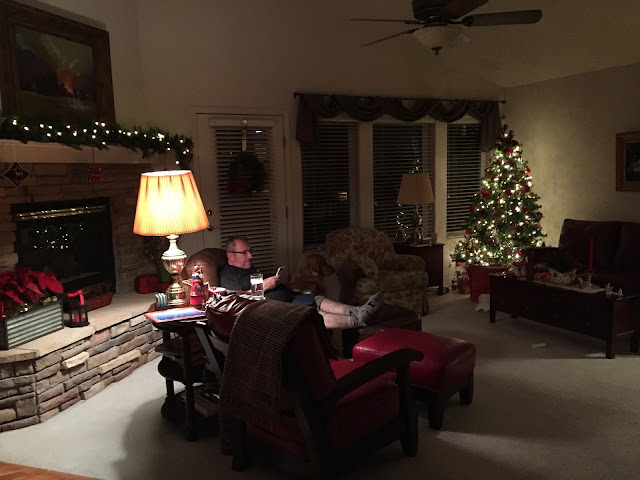 As the year comes to an end, this post is being sent out with wishes for the very happiest of new year wishes.  2016 has ended on a very happy and healthy note for us.  We are so grateful for that.  We look forward to see what 2017 has in store.  Blessings to all you, my dear friends.  I truly do wish you