I have been struck by how small our world has come.  We hear of disasters almost in real time because of the internet, and social networking.  I first read of the earthquake in Japan and the subsequent tsunami warnings as soon as I got up on Friday.  A dear friend and former colleague who now lives in her native Hawaii posted on Facebook that there was a tsunami warning in Hawaii.  Before I even knew why there was a tsunami, I was concerned for both my former teaching buddy and my blogging friend who both live in Hawaii.  When I say concerned, I mean, I really was worried.  They both are a part of my daily life these days, almost as if we were teaching in the same building or living on the same block, because of social networking.  I connect with them more than I connect with my next door neighbors!  I know more about them than I do about my next door neighbors.

So, once I heard about the tsunami warning, I immediately went to my Hawaiian blogger friend Kay's blog (click to link to her blog) to see if she was ok.  She is such a dear person.  I read her blog daily,  and, even though we have never really 'met,' I've really grown fond her and her husband and her mother.  Her mother, originally from Japan, lives with her.  They still have family in Japan.  Kay is always so kind in her words when she comments on my blog posts.  Yes, I think, it is amazing.  I am connected to people a great distance from me because of my blog, and I am genuinely concerned about their safety and well being.

I wasn't able to see a posting by Kay until later in the morning on Friday, March 1l.   While I was work at the University and on a break, I finally was able to read her most recent blog assuring us that they were safe.

Being able to read a blog on my iPhone also amazes me.  Technology has made my world not only bigger but also smaller.  It is bigger because I have access to people I never would have met otherwise.  It is smaller because the miles that separate us mean little in cyber land.

While I was reading about Kay's situation, I was still worried about the family of one of my student Junichi who is from Tokyo, Japan.  He had not yet come to class at 9:30 on Friday.  Junichi never misses class, and he usually the second to arrive in the morning.  We were all concerned.  Was he trying to reach his family?  Were they ok?  Had they suffered any kind of harm or damage?  Yes, because I teach international students, my world is smaller. After all the years that I have been teaching second language learners,  I am connected to students who come from many countries and speak many languages.

Finally, just before 10:00, Junichi arrives.  He is noticeably shaken, but he also seems greatly relieved.  He has been able to finally reach his mother by phone.  She had safely arrived home.  Her apartment was still standing.  He said that she had left her job at 5:00 in the evening on the day of the earthquake.  Public transportation was not working.  She had to walk for seven hours to get home, but she did it.  She made it home safely.

I can't even imagine what she saw on her long journey.  I can't even imagine the fear that must have gone through her mind.  I wonder if she worried how she would find her home once she reached it.  I keep thinking of this woman and wonder at her stamina and determination.  I feel privileged to be able to teach her son.  He works hard.  He studies hard.  He is a son for whom she can feel great pride.  I am grateful that his life has not been touched by the loss of his mother while he is in the United States.  I am sure he must be devastated as he sees the photos coming out of Japan.  He will need a great deal of support from others in the days and weeks ahead. 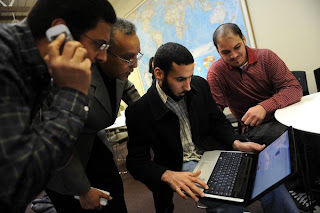 Just a few weeks ago, we in the International Program at CSU-Pueblo, were worried about our former student who was from Libya.  Several had tried to call him or email him to see how his family was doing in Libya.  That very afternoon after we had been discussing our worries about his family, I came home and saw an article about him and other Libyan students in the United States in The Denver Post.  In fact, I was very shocked when I saw our former student's picture posted in the newspaper.   (Photo from The Denver Post)

Yes, indeed, my world in smaller and much wider because I teach. It is also much enriched with friendships that span many countries and many languages.  My heart is open to the struggles that other nations and their people are going through.  I have worked with, taught,  grown to respect, and to care deeply about their youth.  My mind is broader, and my soul is enriched because I understand how connected we all are no matter what we believe or what languages we speak.

I am grateful to be part of a profession that allows me to link my life to lives of so many who have come from all over the world.  It has been a blessing.  My life is much richer because my path has crossed the path of many students from many lands.  These students have touched my heart as we labor together in the classroom.  Their families are never far from their minds.  For that reason, their struggles, their heartbreaks, and the devastation that touches those they left behind at home touch my heart deeply.
Posted by Sally Wessely at 8:34 PM 17 comments: