Home Lives On In The Heart 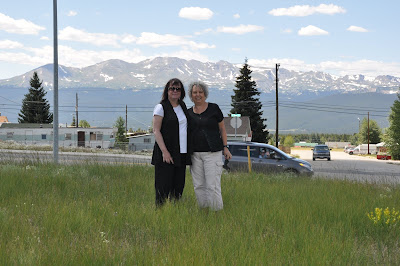 This past weekend, my sister who lives in California was here in Colorado for a visit.  She and her husband and my husband and I spent a few wonderful days together.  During that time, we drove to Leadville to revisit the place where we once lived.

Our father was transferred to Leadville with the D&RG Railroad to serve as the agent for that location just before I was a senior in high school.  My younger sister, shown with me in the photo above, was just starting kindergarten at the time.  We were both at different stages in life when we lived there, but we both think of the happy times and wonderful memories made in this special place. 
The house were we lived was actually an old depot for the railroad.  My mother and I think this is an old drawing of the place.  We think our house would have been the center section minus the second story of the building.  Others in the family may not agree with us, but my mother and I studied this sketch quite throughly and decided that is how the building was adapted.  We have no idea when this occurred.  Our house, a company house, had been occupied by others for quite some time before we lived there.  The house actually sat next to an unused portion of railroad tracks.  The depot where my father worked sat back on the property behind our house.  Behind the depot was a round house where the engines were repaired.


My father went in and gutted the place before we moved in and brought it up to his standards.  It was actually quite nice inside when he finished.  The main part of the house was heated with a Stokermatic coal furnace.  In other words, it was warm around the furnace, but not so warm the farther away you moved from it.  We would actually sit on top of it to get warm.  We would also dress in front of it on really cold mornings.  The back of the house, an addition that included the kitchen and bathroom, was heated by propane.

Everything is gone now: the house, the depot, the round house.  My sister and I walked the property last Friday trying to pinpoint where the house must have been.  It is impossible to know for certain.  As we walked, I said, "The coal shed must have been here.  Look at all the coal."  In truth, there was a lot of coal everywhere.

The house now sits in the middle of a lot outside of town serving as a storage shed. 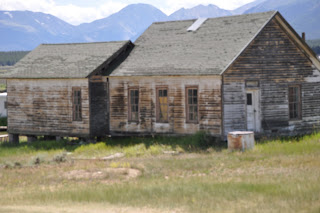 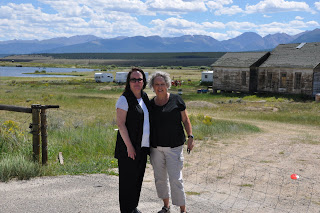 Since the house is gone from its original site, we hope to connect to the place where it once stood. 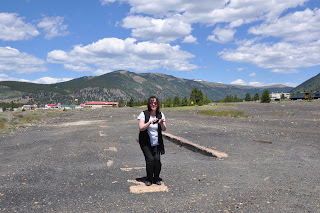 We walked back to where we thought the depot might have been.  Suzanne said, "I think this is where Daddy's office was.  I am typing on his typewriter."  Sally said, "You are not the one who had to type your senior paper on that old thing."  The typewriter was an old upright.  I had typed a very messy looking senior paper on it. 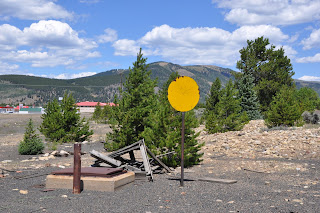 We walked back to where the round house had been.  I really have little memory of this building.  Suzanne said she actually got to go in and watch the men work underneath the engine. 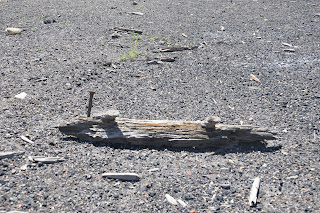 We find little to mark the place where we once lived and where our father once worked: just one weathered piece of a railroad tie and a spike.  "It's not a golden spike," I say as we look at it.  Only an old rusty bucket seemed to have left.  I pick it up to bring home.  "I might plant flowers in this," I say. 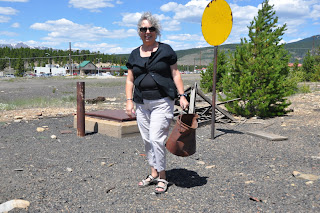 We work our way east on the old railroad yard to the objects that I know are really drawing my sister.  Three old abandoned cabooses sit on what remains of a set of tracks.  The caboose of the family heads to that magical railroad car that embodies so many of her childhood memories. 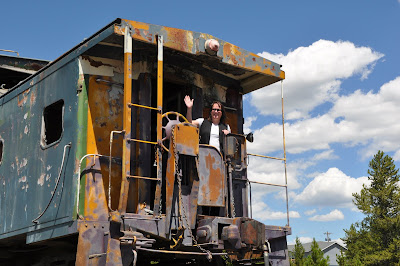 When she was in kindergarten, only going to school half a day, when the weather was bad, my father would have her picked up by the railroad crew on its way back to the depot if he couldn't pick her up.  Her tiny little figure, dressed in a red coat, the hood pulled up over her head, would climb aboard the caboose and ride home. 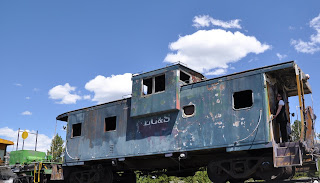 Once on the platform of railroad car, she struck a pose.  It is hard to see in this photo, but according to her, it was the pose that she saw in all the girlie posters that lined the inside of the caboose. 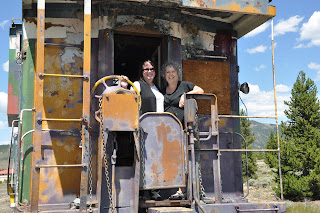 I soon joined her on the platform at the end of the train.  From there, I looked out at the mountains in the distance.  Mt. Elbert rose above my former high school and town. 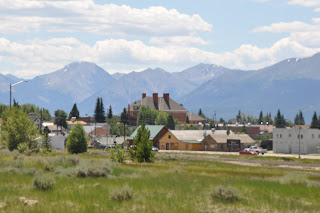 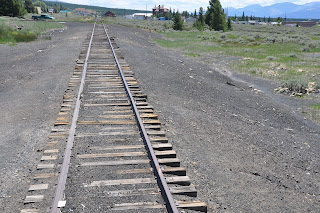 I looked down at the tracks.  I was home.  I felt connected to my past, my roots, my history.  I remember who I am, and where I have been.  I am: a railroader's daughter,  mountain girl,  and a third generation Colorado native.  I once lived two miles high.  I identify with Molly Brown. It takes a lot to sink me.