This summer, I've been able to spend some time with my #1 son.  I hesitate to call my oldest child and oldest son by the title of #1 Son because some may think that the title denotes favortism.  I assure you it does not.  For some reason, I've just referred to my eldest child as #1 over the years.

My oldest son lives in Utah, so that means we must travel in order to spend time together.  He is a banker who works very long hours during the workweek and commutes an hour each way to work every day.  Needless to say, he is very busy and does not get a lot of time off work.  I try to spend at least a week in Utah every summer and try to make at least one additional trip a year to spend time with him and his family and my daughter and her daughter.
This year, Ryan made two trips to Colorado to visit.  This was a rare treat for me.  He was here for a few days at Christmas, and then he was here for a few days over the Memorial Day Weekend.  Ryan has been such a strength to me throughout the entire process of settling Julie's estate when it came to taking care of all the financial matters that occur after a death.  I don't know what I would have done without his financial wisdom and knowledge.   I've always valued his financial knowledge when I've turned to him for advice, but his fair and impartial ability to sort through many issues was truly priceless when I needed it in settling a difficult situation.
Ryan is a fun guy to be around.  He has a great sense of humor.  I love his take on life, people, and situations.  He has top notch social skills.  He makes friends easily and keeps them for a lifetime.  He likes to make people laugh and have a good time.

He also loves to cook.  On Sunday morning of Memorial Day Weekend, he got up and fixed breakfast for my husband and me.  Here he is in my apron.  I have others that aren't quite so feminine, but he grabbed the first one he saw before he began to fry up some bacon.
Later that weekend, after he and I drove to Northern Colorado to stay with my daughters and a friend from Utah who would all be running the Boulder Boulder the next day, he made us some panzanella.  I was quite impressed and thought it was quite yummy, but then, I'm his mom. 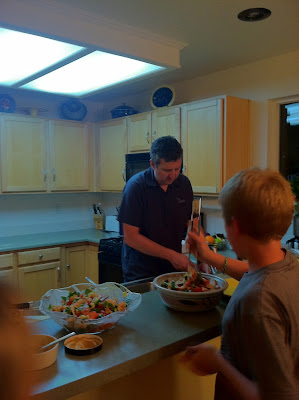 Ryan says cooking helps him relax after a hard day at the bank  Actually, he has always loved cooking.  I remember when he took cooking in junior high, he came home with all kinds of new recipes to try out on the family.
So, when I was in Utah in June, I had the opportunity to enjoy some more of his cooking.
Father's Day Barbecue
Ryan checks his email on his phone while others are serving themselves some scrumptious barbecued food he had prepared for a Father's Day celebration. 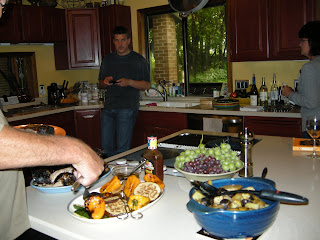 We had grilled veggies and wonderful spare ribs that had been prepared using Ryan's special sauce. 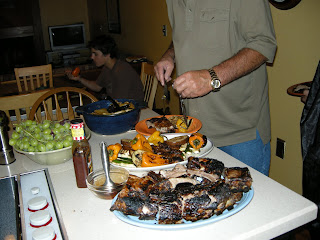 Cousins, Regan and Gillian initially came to the celebration dressed as Dracula and bride. 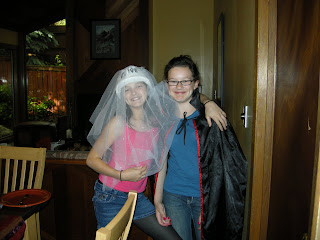 Then, they changed outfits and came as bat woman and another wacky bride.  Regan has a belt made from her pajama bottoms and hat made from a cheering pom pom.  Note the make up they applied for this photo.  Don't you just love the RED lipstick? 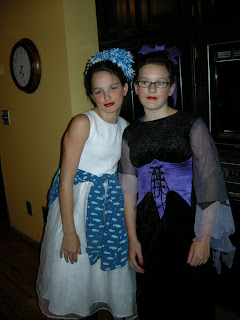 They are being silly, but I think they will both be beauties someday.  Of course, I'm the grandmother, so I am a bit biased.  Actually, they are already quite beautiful in my eyes. 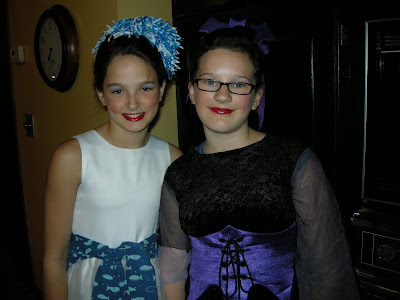 A shot of them being silly in the back yard. 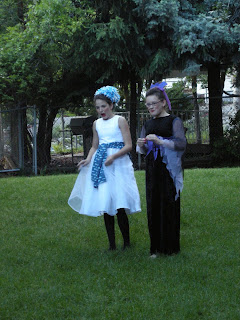 Bridger has just made me the perfect smore in this photo. 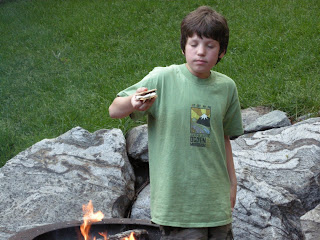 Four of my grandchildren roast marshmallows around the fire pit on Ryan's wonderful back patio. 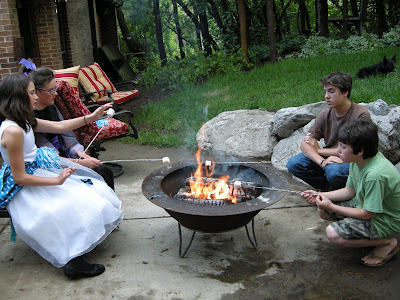 Summer Solstice Party
My oldest grandson, had a bunch of buddies over for a summer solstice party while I was in Utah.  After the party, he drove me back to my daughter's house a few miles away.  It seems very odd to think that my oldest grandchild will soon have his driver's license.  I was impressed with his driving ability while I was being chauffeured around. 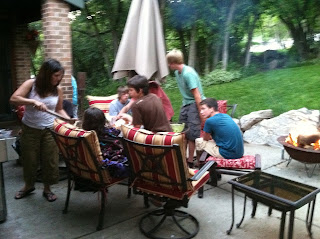 While the kids ate hamburgers and fix-in's out on the patio, Ryan fixed me a perfect hamburger, just the way I like it. 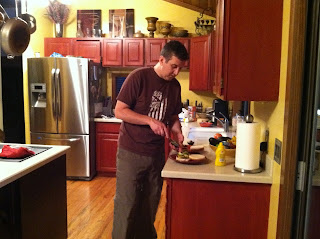 While I was visiting with Ryan and his family, I had the opportunity to go shopping for a few supplies for an upcoming scout trip that he and Parker were taking later that week to the Moab area.  It was a biking, rafting, rock climbing excursion.  Ryan, who earned his Eagle Scout Badge as a young teenager, took some time off work to lead this trip for Parker's scout trip.  It was so great to see his excitement as he prepared for the trip.  It took me back to his days as a scout.  It brought back many happy memories and proud moments when I saw him inducted into the Order of the Arrow during a harrowing lightening, thunderstorm in the mountains of Idaho over 25 years ago.  I've always been proud of his achievement of reaching the rank of Eagle Scout.  It is great to see him now giving back to scouting as he takes his own son and others on scouting trips.  He is following in the footsteps of his paternal grandfather, another Eagle Scout, when he does this.
There are two special memories of Ryan that I  carry with me in my heart.  In both memories, he has the same look of absolute pride and sense of accomplishment.  One was the day he emerged from the workshop in the basement of his childhood home with the first completed birdhouse for his Eagle Scout project. He had constructed it on his own using a power saw.  Pride was written all over his face.
I saw that same look of pride, accomplishment, and amazement when he emerged from the delivery room carrying his first-born son and my first grandson.  His eyes said, "Mom, look what I've produced!"  These memories, and the ones we continue to make whenever possible, are treasures that become more valuable as each year goes by.
Posted by Sally Wessely at 9:37 PM 25 comments: