After Christmas, the two red amaryllis blossoms that had sprung forth from a bulb planted in just stones and water, died back.
Those brilliant red blossoms that brought brilliant color to the drab days of winter eventually faded and began to die.
If I had known nothing about bulbs,
or if I had known nothing about amaryllis,
I would have assumed the spent looking appearance of what was left of blossoms meant the the plant’s day had come to an end,
I then would have tossed the plant out.

Instead,
I cut the flower stalk back to about three inches above the bulb.
I then took it downstairs to a cool dark closet that seldom gets opened.
I thought I’d check on it again in the fall.

Mid-March, I was looking for something in that dark, unused closet.
Not wanting to knock over the glass container containing the rocks and the bulb, I looked to see exactly where it was hiding in the closet.

Imagine my surprise when I saw a new green stalk shooting out of the bulb.
On the end of stalk was a bud.

I brought it upstairs,
gave it a big drink of water
and
waited to see what time and light
would do for it.

Thankfully, I had not read the fact sheet stating that amaryllis planted in rocks and water without soil
would not re-bloom.
The photo below proves they will re-bloom.
There was a rebirth.

Now the Christmas plant has bloomed for Easter. 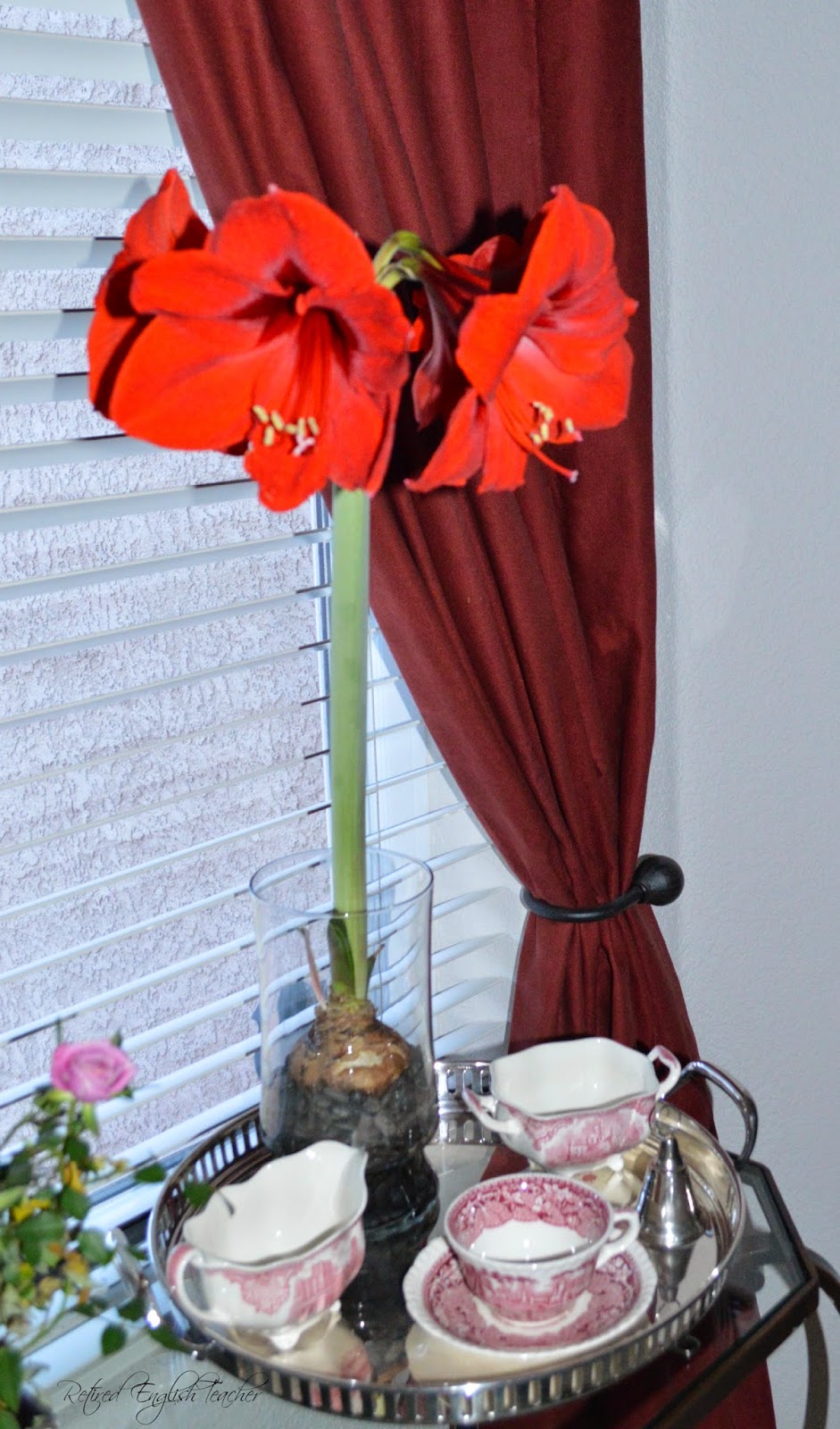 Last week, my daughter sent me a text with a photo of daffodils attached.
Daffodils are my favorite flower.
They are a beautiful symbol of hope and rebirth.
She had made an arrangement with the flowers that combined springtime objects that gave her sweet memories.
One item in the arrangement were the salt and pepper shakers that once belonged to our dear Julie. 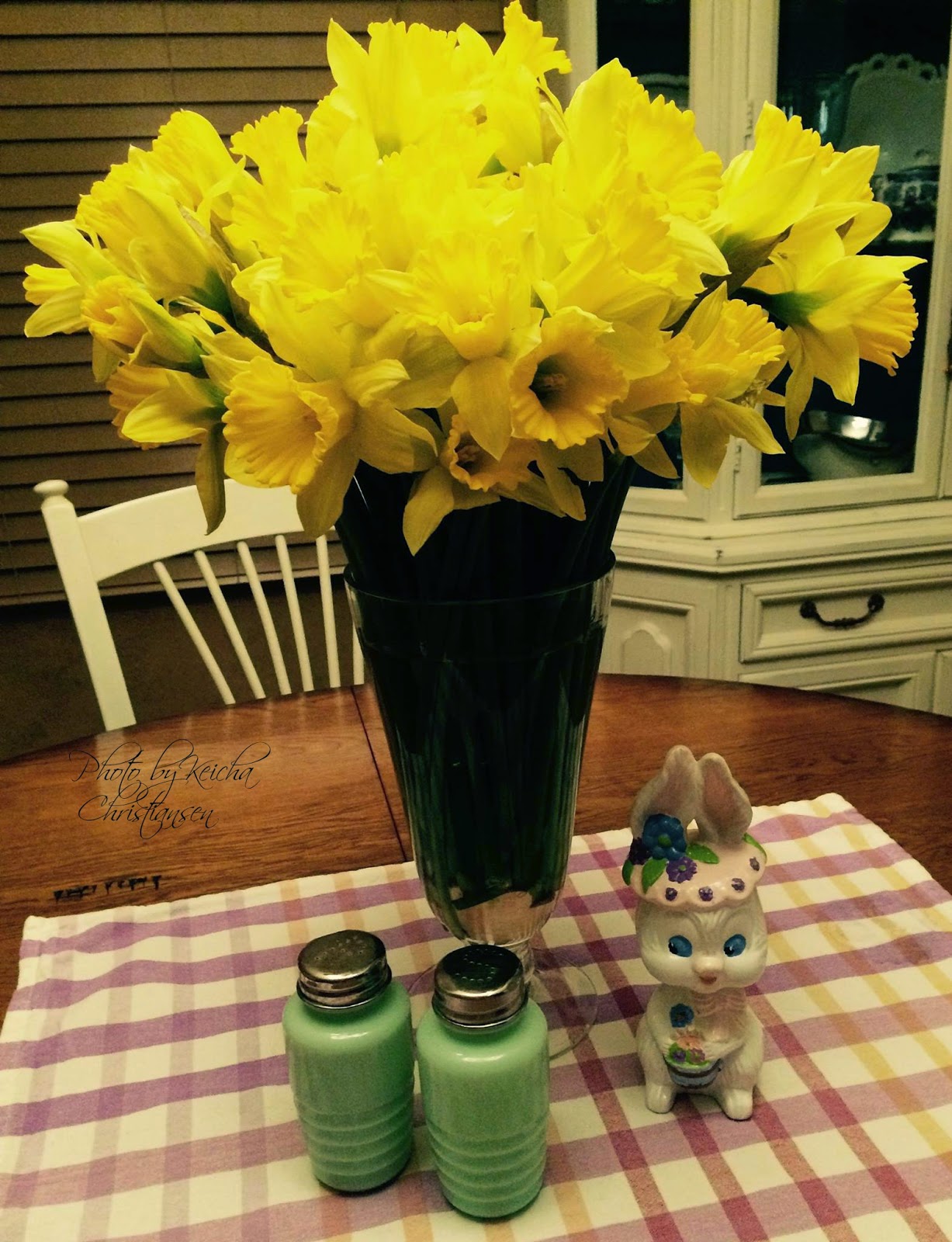 This next week will be a hard one for us.
Easter is a mixed occasion of joy and grief for me.
The last time I saw Julie was on Easter of 2010.
On April 8, Julie would have turned 39 years old.

If I knew nothing about life, and death, and about faith in a God in Whom I can trust,
I would have completely been undone when my daughter died.
Many, many years ago I came to faith in Jesus Christ.
I went down paths that led away from my belief,
But I did not remain on those misleading paths.
I returned to faith.
When I needed that faith in the most,
My need was met by Jesus, the one trusted as a young girl, with grace and continued healing.

Easter brings me joy and hope.
Tomorrow, I will raise my voice in joyful Hallelujahs of praise for the death, burial, and resurrection of Jesus Christ.
I will join others around the world when it is announced
He is Risen
By saying,
He is Risen Indeed.

A few day later, on what would have been Julie’s birthday,
I will remember Julie with these words penned by C.S. Lewis as an epitaph for his beloved Joy:

“Here the whole world (stars, water, air,
And field, and forest, as they were
Reflected in a single mind)
Like cast off clothes was left behind
In ashes, yet with hopes that she,
Re-born from holy poverty,
In lenten lands, hereafter may
Resume them on her Easter Day."

Have a blessed Easter.