December is always a busy time of the year, but this year this busy month has also brought great change to our lives. Jim has gone back to work. He was called and asked to go to work on a Friday afternoon, November 21st to be exact. It just so happens that at the time he was called, he was just coming home from Colorado Springs after having had a colonoscopy. This weekend, I happened to find a little souvenier from that procedure: his take-home vomit bag was tucked inside of the passenger side pocket of the car. I pulled out the bag and commented on how the bag was still there. Jim asked, "What is that for?" I said, if you don't remember, you had no business saying "yes" to the job offer you got that same afternoon. He truly had no memory of being sick or anything that happened that afternoon after the procedure(he complained of shoulder pain and underwent many xrays etc.), except for the job offer. I did advise him when he got the phone call that he had been told that he could not make any big decisions that day; therefore, the answer would have to wait until Monday, the 24th of November.

After discussion of the pros and cons, Jim did decide to return to work as principal of Pitts Middle School from December 1, 2008 until June, 2009. You can read the article from the Pueblo Chieftain about his appointment on this link. http://www.chieftain.com/articles/2008/12/03/news/local/doc49363e80cdd01607999371.txt

I have been teaching a methods course at Colorado State University-Pueblo for students who are preparing to be secondary English teachers. I had a great group of students this year and really enjoyed the experience. I taught the class last year, but it seems that it is always better the second or third time around. I am attaching a picture of the class that was taken last week just before our final. I will miss this great group, but am excited about their potential. 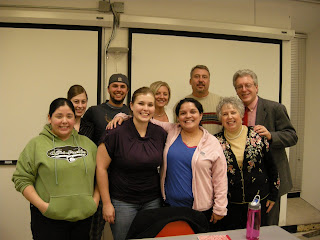 The day after my English methods class final, Jim and I went to Santa Fe to support the South High School basketball team who was participating in a tournament. This tournament participation has been going on for eleven years, and Jim and I had the opportunity to first attend in December 1997. It is hard to believe that it has been that long since we made the first trip with the team. Sadly, on our first trip in 1997, we received word that a student at Centennial, where I was teaching at the time, had been murdered in in her bed by an intruder. The young girl, Julie Padilla, had been a student of mine in seventh grade at Risley. In 1997, when she was a sophomore, I believe, she would come into my room at Centennial after school or during breaks with some of her friends who had also been students of mine at Risley. They used to love to draw pictures on my white board. Like I said to my class on Wednesday night, teaching will break your heart. We sometimes have terrible things happen to our students.

Then, there are the good memories that go with teaching. The team from 1997-98 is now all grown up and taking thier place in society. We stay in touch with many of them at weddings, family gatherings, funerals, class reunions and athletic events. Last night, Jim and I visited Ryan and Amy Torres at the Torres restaurant, El Nopal. Ryan and Amy are much loved former students of Jim's at South. Ryan played on the 1997-98 team. We were recalling that trip to Santa Fe in '97 with Ryan. Now, he is a young man who is most likely to be hired as a Pueblo City policeman in the next few weeks. Amy is teaching French and English at Pueblo East. We watched them grow up, date, went to their wedding, just recently grieved with them at Ryan's father's funeral. Of course, Ryan's father, George, was a special dear friend of ours also. All of these relationships began because of Jim's involvement with his students at South.

This trip was especially nostalgic because I am sure Jim and I won't be going down to the Capital City Tournament with the team again. The coach, Dave Locket, is retiring this year, so this trip was the end of a tradition in many ways. While Jim was principal, we tried to always build the South High family. Dave and his family and his teams have been a very important part of our family. Dave is one who also is all about building family. He teaches special ed and he has always included some his students from his classes in the team. Some have been water boys since high school and continue to sit on the bench now that they are in their 20s. 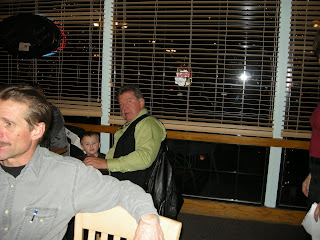 This is a picture of Dave that I took in Santa Fe.


We have had some great memories made following the South High teams. This weekend's trip to Santa Fe ranks right up at the top. I didn't get a lot of pictures, but here are a few. 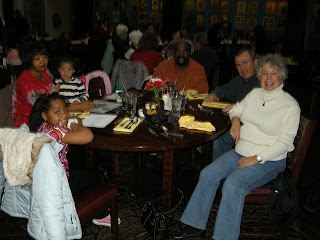 Here is a picture of Jim & me, and the Wilhites having lunch on Saturday at my favorite spot for chili rellanos - La Fonda. Love that place! 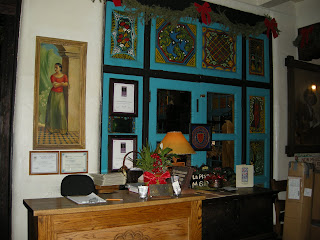 Keith and Tootsie Wilhite, parents of Kameron Wilhite, member of the 2008 team are great friends of ours. We have watched Kameron grow up. He was seven or eight when we went to Santa Fe in '97. He is a fine young man, a senior and an excellent athlete. Keith was very excited and quite surprised when he saw a "doll that looks just like me" at La Fonda. I took his picture. What do you think? 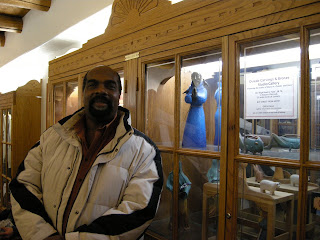 Keith and his twin. 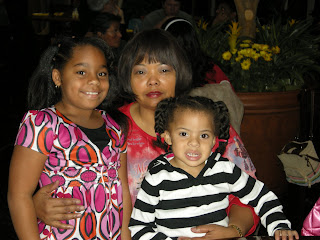