At about 11:20, Mountain Standard Time, I left my freshman level United States History class at what was then known as Colorado State College (now University of Northern Colorado) to head back to my dormitory room in Wilson Hall.  I was scheduled to work lunch duty in the dining hall and was happy to get out of class a few minutes early because we had been shown a film that day that ended before class was normally over.  It was a Friday, and I was looking forward to going on a date that night.  I was also happy that it was nearly time to go home for Thanksgiving Vacation which would occur the following week. 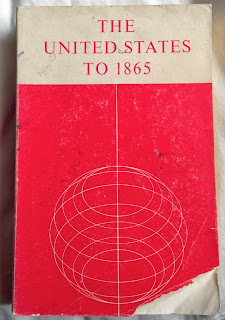 As I said, at just before noon, I had been attending my freshman history class, a class I greatly enjoyed that was taught by one of those professors able to make history come alive.  I still have a copy of the book we were using:  The United States to 1865.  I kept it thinking it would be a good resource in my teaching career.  Now, after all these years, I think I also kept it as a tangible piece of my own personal history.  I carried this book with me as I crossed campus that day fifty years ago today.

With the quarter drawing to an end, our professor had nearly finished teaching us the course.  Just days before, it had been noted that it had been 100 years before that Lincoln had given the Gettysburg Address.  On this day, November 22, 1963, at around 11:00 a.m. MST, my classmates and I watched a film about the assassination of President Abraham Lincoln.  Our professor talked briefly about the assassination and the film before he showed the film.  He talked briefly about the hopes that Lincoln had for his second term in office.

I quote from this textbook some of the words that our professor spoke about as he introduced the film:

In the spring of 1865, when the lilacs opened early and the dogwood spread its pure white blossoms in profusion  Lincoln was hoping that the nation's second birth would be free of complication.*  Our professor did not want us to miss the hope that Lincoln had for the the future of our country when he was tragically killed on April 15, 1865.

I will never forget that just before the film started, our professor placed a trash can next to the classroom door that led to hallway outside.  He said, "This is for your kleenexes.  The film is very realistic and will cause some of you to become emotional."  He was right.  At the end of the film, I was crying.  I continued to walk across campus with tears in my eyes thinking of that great president who had been shot nearly one hundred years before.

As I crossed campus, other pathways began to fill with students emptying out of other classes.  I tried to get my emotions under control.  Just as I came to the crosswalk near Gunter Hall and Bru Inn, I saw students coming onto campus from the dorms.  I noticed that those coming on campus were crying.  Finally, I stopped someone and asked what was going on.  I was told that they had just heard that the President had been shot.  "No," I said.  "You probably heard someone talking about the film we saw about the assassination of President Lincoln."  I was told that the news was spotty and the sources not specific, but that it did indeed appear that President Kennedy had been shot.

I continued on in my state of denial.  "This just could not be true.  Presidents don't get assassinated in our country."  I continued walking the short distance to my dorm room and climbed the three flights of stairs to my room.  After I changed into my uniform that I wore to serve in the dining hall, I stood at the window and stared to the ground below as I listened to the news on the radio.  There seemed to be such confusion over what had really happened.  I was all alone in my room.  I heard Walter Cronkite announce that President John F. Kennedy was dead.  I was overcome with grief and disbelief.  Soon, I had to leave to go to work in the dining hall.  I still remember that we were served tomato soup and grilled cheese sandwiches for lunch that day.  It was a Friday.  We were not served meat for any meal on Friday.

I remember I just wanted to go home.  My youthful idealism had been shattered.  I remember that for days, before we all could go home for Thanksgiving Break, all of us sat in the student lounge, the only place where a television set could be found,  and watched the days that followed Kennedy's death unfold on the television screen before us.  Those images will stay with me forever.

In 2007, my husband and I spent the day at the John F. Kennedy Library in Boston, Massachusetts. We were enthralled with the exhibits and totally overcome with emotions as we end our visit that day after we watched the newscasts that had gone around the nation on the day Kennedy was shot.  We felt as if we had gone back in time as we viewed artifacts from the 1950's and 1960's.  We felt the years fall away as we remembered those time.  Viewing all of the newscasts made it all too fresh for us again.  We both wept. 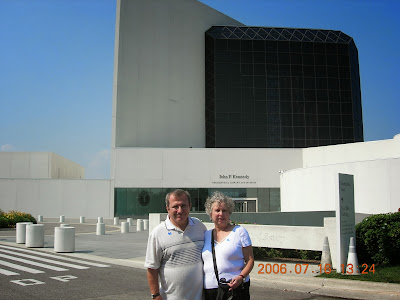 I was a young 18 year old college freshman when Kennedy died.  Away from home for the first time in my life, my letters from that time reflect a young girl who was trying to make the transition from high school to college, and trying to move from carefree teenage days into a more adult time of life.  In reality, I was woefully unprepared for college and for adulthood.  I was extremely idealistic.

JFK represented a new time in American History for those of us who were born just as World War II was ending.  I had been raised in a family of longtime Democrats.  My paternal grandparents were as dyed in the wool Democratic Party as you could get for the time.  They were active in local politics and served on many committees.  My grandmother was president of the Jane Jefferson Club in my hometown.  Grandpa was an Adlai Stevenson man.  When Kennedy was chosen to represent the Party in his bid for the Presidency, I have not doubt that they supported him because he was loyal to the party.

To me, Kennedy was a bit of "fresh air."  He was not like the politicians that my grandfather talked about.  Kennedy had the "cool" factor.  He was young, handsome, smart, had a great accent, and of course, I adored Jackie Kennedy.  I listened to his speeches when I could, and I felt the hope for the future that he seemed to bring to our country.  I had hope that he would bring great progress to the Civil Rights Movement.

Our country was so different then.  We had a sort of innocence about us not found in today's society.  I have always believed we lost our innocence as a Nation that day when JFK was assassinated.

Now, we know so many things about Kennedy that are not flattering.  In 1963, I believed in Camelot.      I did not see the Kennedy family as royalty, nor did I believe that they should be treated as such, but I did believe that Kennedy spoke of vision, youth, and optimism. At that time, I did not know that a young girl, just about my own age, Mimi Alford, had been his secret mistress.  I did not know that he treated this young girl just months older than I, so despicably and exploited her youth and her innocence. Trying to reconcile the Kennedy that was a womanizer with the Kennedy that the public saw is no easy task.

In the end, I choose to remember the vision that he seemed to transmit to those of us that were young when he lived and died.  I am grateful I was born and came of age in those times that spanned the end of World War II until the day, November 22, 1963, when Kennedy was shot.  I take a line from Kennedy's Inaugural given on January 20, 1961 and say, "Yes, Mr. President, you were right.  I would not exchange places with any other people of any other generation.  Thank you for inspiring us with these words so many years ago.  I believe these words still burn deep in the hearts of many from my generation.

I do not believe that any of us would exchange places with any other people or any other generation. The energy, the faith, the devotion which we bring to this endeavour will light our country and all who serve it. And the glow from that fire can truly light the world.
And so, my fellow Americans, ask not what your country can do for you; ask what you can do for your country.  ~ John F. Kennedy, January 20, 1964. 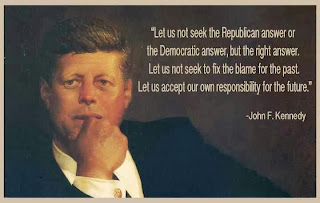