Reflections On A Life Well Lived

Our next door neighbor died just a few days before Christmas.  Last night, when Jim and I returned home, I said, "I just can't believe Joe is gone."  Jim agreed.

We have lived in this house for about sixteen years now, but it has only been in the last few years since we retired that we really got to know Joe.  Before that, we were gone much of the time and never had time to get to know our neighbors.

Joe and I neighbored a bit back and forth from the first summer on.  He would be out puttering around the outside in the evenings as I dug in the dirt in the front yard.  When we first moved in, there were no flower gardens in the front of our house.  There was only rock and ground cover.  Slowly, shovel, by shovel, I began digging and planting.  As I dug and planted, Joe puttered next door.  I became accustomed to knowing that my house and yard was always safe under Joe's watchful eye.

Nothing in the neighborhood ever escaped his notice.  Once, he came over and told us the garage had been left open during the night.  Another time, he warned that thieves had broken into his garage and other garages and were stashing the goods in his back yard.  He found the loot and called the police.  We installed chains and locks for our back gates.

Another time, we had to have some foundation work done to the house.  I was out of town when the work began.  Before leaving, I had discussed with the workmen how they could dig up my flower beds. Joe had no idea that we were having the work done.  When workmen began digging up my flower beds and pulling out plants, Joe came over and asked what they were doing.  He said, "Sally is going to be mad as hell when she gets home and sees what you have done to her beautiful flowers."  I still smile over that.

Once we retired, we got to know Joe better.  My husband and Joe would visit quite a bit as Joe tinkered on his old car or worked about the yard and house.  They would even share a few books.  We had time to finally get to know our neighbor.  Whenever we went on trips, it was nice to know that at least one neighbor was looking out for our house.  Joe and his wife would graciously pick up our mail and newspapers whenever we were out of town.

Joe, born just two days after I was born, was a wiry, short man who at one time managed the local Furr's Cafeteria.  He then prepared meals for the Meals on Wheels program.  A quiet man, unassuming, humble man, he married young and worked hard all his life.  He treasured his wife and family.  He adored his two grandchildren.  He honored his Catholic faith and his Hispanic heritage.  He was a hunter and fisherman.  He seemed to be able to fix anything.  He was truly one who could be described as "the salt of the earth" or one of great worth and reliability.

Over a year ago, we noticed we hadn't seen Joe recently.  We remarked that we worried that he was ill.  Then, we saw him one day and were shocked to see how much weight he had lost.  He had colon cancer.  He seemed to rally.  This summer, when we got up every morning and went out on the back deck to drink our coffee and read the paper, Joe was already out working.  He was fixing things around the house.  He was up on the roof.  He was painting.  He was always busy.  Even though he was fighting cancer, he went about his lifelong habit of being industrious. 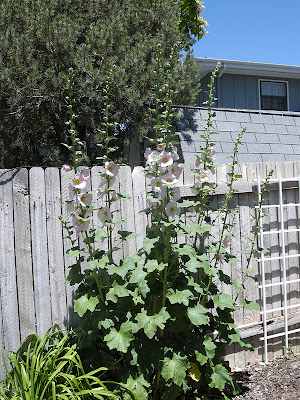 One day this summer, as I was out working in the garden, Joe hoisted himself up on the fence between our yards.  He asked what kind of flower I had growing next to the fence.  I told him they were hollyhocks and related the story about collecting the seeds at a farm in Grand Junction.  I told him I was shocked to see how much they had grown since it took two years for them to come up and bloom.  He said they were just beautiful and said he'd never seen prettier.

Sadly, in the end, cancer claimed Joe.  He only weighed 84 pounds when he died after suffering so much during most of the fall.  His devoted wife took care of him everyday until the day he died.  He was surrounded by his grandchildren and his sons on a nearly daily basis.  One is blessed to have such love and care in one's life.

On the day of his funeral, I smiled when I saw his beautiful new red truck, driven by his son,  pull into place in the procession headed toward the cemetery.  Joe was so proud of that truck.  Then, I had to wipe  tears from my eyes as I thought how he would not be able to enjoy driving that truck up into the hills to go fishing or hunting.  He never got a chance to retire and do all the things he loved to do.  He didn't get to watch those beautiful grandchildren grow up.  He was too young to leave us so soon.

Joe's life was a sterling example of love and faith and hard work.  He lived his life well.   He left of legacy of how to be a good husband, father, and neighbor.  He exemplified la familia in the most positive of all traditions associated with his heritage.  We will miss him greatly.
Posted by Sally Wessely at 4:21 PM 28 comments: