Potpourri,
a mixture,
a collection,
a mixed bag,
a rag bag.
A blog post
becomes a collection of thoughts and activities when one has been
away from blogging for over a month.

I had a birthday while I've away from blogging. 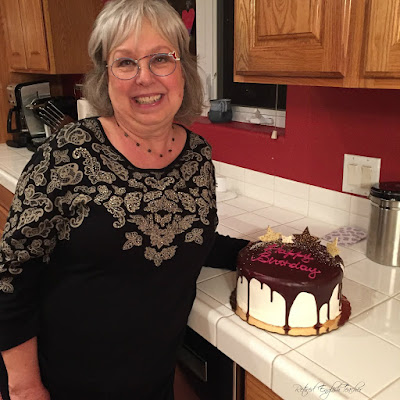 Daughter Amy and granddaughter Hannah came to help me celebrate.
We also celebrated Amy's birthday which is usually five days after mine.
Every four years there are six days between our special days.
I was born on February 28.
I gave birth to Amy on March 5.


Amy and Hannah brightened my birthday by being with me to celebrate,
and Amy brightened the house by putting together this vibrant and colorful birthday bouquet
which I enjoyed for days.
My son-in-law had to touch the flowers to see if they were real.
Thanks again, Amy. 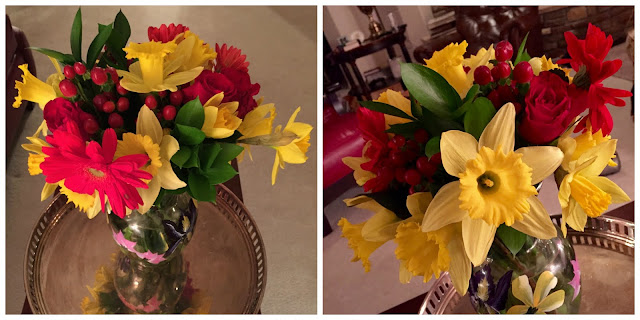 All the kids sent me a Mother's bracelet that came from Sheridan and Ryan's shop, Hip & Humble.
I just love it! 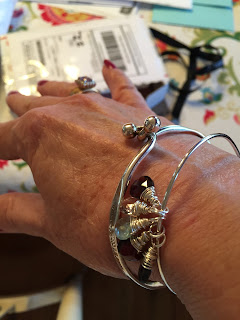 After Amy and Hannah left for home, Jim and I took advantage of the beautiful weather we were having by taking a walk under beautiful blue skies in the Garden of the Gods. 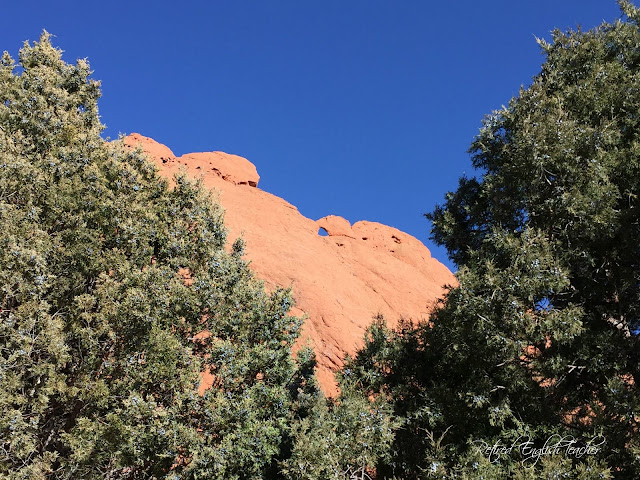 We had a lot of cake back at the house, so Jim's daughters, their husbands. and children came over to help me celebrate later in the evening.

The next day, Jim drove me to Denver for a doctor's appointment.
After the appointment, we drove out to tour Amy's place of employment, a data storage center.
Once we passed security, we had to go through this gate to get to the front door where Amy met us. 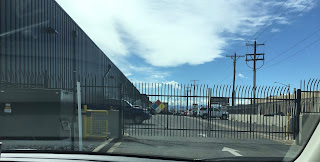 We were very impressed by the entire operation that happens at such a place.
It was all quite interesting.
Amy is the company's human resources generalist.
The girl actually gave in and let me take her picture.
Mom's have to brag on their kids once in a while. 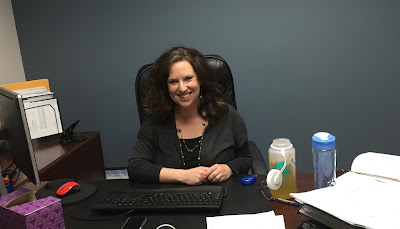 *****************
March has been such a busy month.
It seemed I lived at National Jewish Health during March as I was having many tests done.
I won't bore you with details.  I just had a lot of GI testing for chronic problems.
I am doing well at the moment and feeling good.
That is the good news.

I've attended way too many funerals this past month.
One was for the mother of a friend.
One was a heartbreaking one of a young man whom had been a student when my husband was principal.   He was the victim of a senseless act of violence.

I also serve on the funeral committee at our church.
This last month, we've unfortunately been hit by quite a few deaths in our church.
Our committee puts on a reception for the family and other attendees after the funeral service.
This means that we usually work five or six hours putting it together and cleaning up afterwards.
The ladies on the committee have become very close,
and we have a lot of fun together behind the scenes.
At one funeral earlier this month, I was in charge of making the coffee.
The coffee maker malfunctioned.
Actually, the coffee machine was fine,
but the maker of the coffee (that would be me) put the wrong size carafe under the machine.
I had a huge mess on my hands.
Let's just say coffee was going everywhere, and it kept on flowing before I figured out what to do: forget about cleaning  up the mess and get another pot under the machine.
Then I cleaned up the mess.

We serve because we have served by others when we lost loved ones.
Now, we are giving back.
It is good to serve others during their times of bereavement.

Two weeks ago, I hosted for my high school girlfriend get together.
Thank heaven's EH co-hosts with me!
I get so scattered getting everything ready that I am useless.
EH comes in and helps me set things up, get the food served, and she even stays and helps clean up.
She keeps things together while I flit around losing my mind. 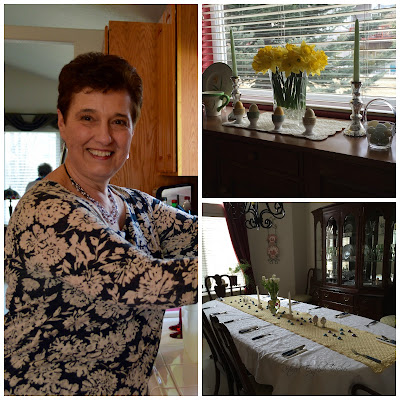 The time with the girls is a celebration of fun, friendship, and food.
This time we had fabulous Mexican food.
As is our tradition, we gathered to lift a Margarita toast to those dear friends that are now departed.
Then, we feasted on homemade tamales, green chili, enchilada casserole, and the most amazing flan cake.  There were veggies, and chips and dip, cheese cake, too.
Needless to say, we had quite a feast. 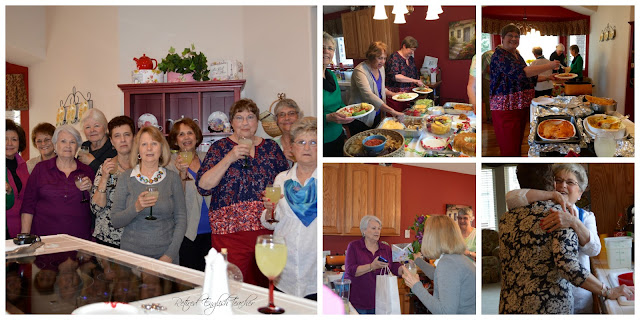 Before we ate, we took our group photo on my front porch.
I used the automatic self timer on my camera for the first time.
Note that I barely got to my spot in the group before the camera took the picture.
I'm just glad I didn't knock over the tripod. 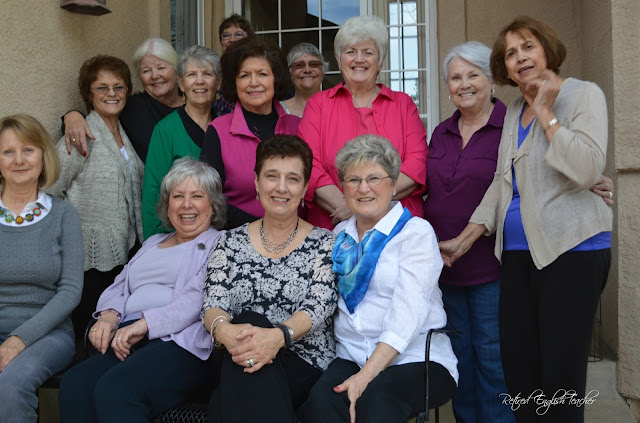 I love these girls!
We are all so blessed to have each other.
Our friendships become richer and more priceless with each passing year.

Jim and I took a road trip to see my mother last week.
I hadn't been over to see Mother since September.
Since she lives on the other side of the Rocky Mountains, I no longer make the trip in winter.
After checking the weather forecast, we determined the best day to make the trek.
On the day we left, snow started falling in the mountains.
I suggested a more southern route which my husband thought seemed too far out of the way.
In the end, he took my suggestion.
Terrible snow storms that included wind, blizzard like conditions, caused road closures on the route we usually take.
Thankfully, no snow fell on us, and we had very little traffic.

I'd not told mother we were coming until we left home because I didn't want to disappoint her in case weather prevented us from making the trip.
She seemed so happy and quite surprised to learn we were coming.

The morning after our arrival, I snapped this photo of Mother.
This photo captures so much about her.
She is enjoying her coffee and the newspaper as she does every morning.
The coffee cup says CSHS on it and has a image of her high school on it:
Colorado Springs High School.
Her green thumb is evidenced by the gorgeous orchids on her table.
I gave her those orchids last year for her birthday.
She'd never grown orchids before, but that didn't stop her from keeping them blooming a year later.
The painting on the wall is one she painted.
The smile shows she is engaged and engaging.

She tells me all the time that she isn't going to let anyone one do for her what she can do for herself.
She often tells me she gets up and cooks herself an egg and bacon every morning.
"I cook a real meal. I don't just pour cereal in a bowl.  I make a meal."
"If I stopped doing for myself I'd be done." 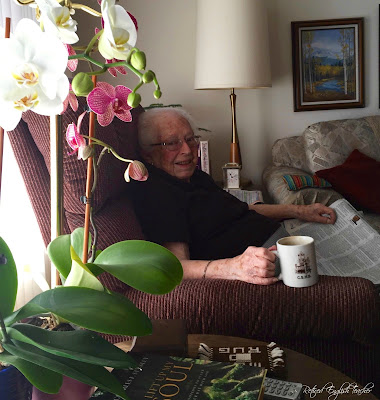 I asked if she needed to go shopping.
She did.
She needed make-up.
So, she got her spring coat on and off we went to the mall. 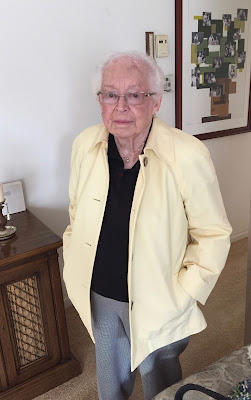 This woman, my amazing mother, will be 100 years old in May.

She has a new walker that allows her to get around better than when she uses a cane.
She stood up straight and tall and pushed that walker through the mall.
In my mind, I heard her short quickly paced high heel clad steps walking down the sidewalk in front our home when I was child as she came home
from Wednesday evening choir practice at the church in the next block.

Straight and and tall, all 4'10" of her tiny frame stepped out at a pace that amazed me as she pushed that walker.
Again, an image came to my mind.
I saw her pushing a baby buggy down the street towards the bus stop, clad in high heels, walking at a fast clip, she was going to town to do some shopping with my baby sister in the buggy,
and myself at her side.


This day, all those years later, we had lunch at the mall where she commented on hair styles and clothing styles.  She notices such things.  She's up on all the styles.  She doesn't like some of them.  I wonder if anyone even knows what style is these days.

Then we went to buy her makeup.
She said she needed one more thing while we were there.
She was out of Chanel No. 5 perfume and needed to get a new bottle.

Yes, that is my amazing mother.

Today is Good Friday.
It was warm this morning.
I went out dressed in a light sweater and slacks and flats with no stockings as I went to the store.
This evening when we went to dinner, I was dressed in winter pants,  a warm sweater, and boots.
I put on my long wool dress coat that I had not put on all winter to wear to Good Friday services.
It was snowing like crazy all through dinner.
We actually had thunder snow where it was thundering and snowing at the same time.

We missed Good Friday services because of the weather.
It just didn't make sense to go out for night services on a night like this.

On Wednesday, we were snowed in due to a blizzard.
Earlier today, before the snow hit, I went out to buy groceries.
I've leaned to get to the store early when snow is in forecast.
I'm not sure if my daughter and her family will make it down on Easter because of the forecasted storms, but I thought I'd better plan as if she were coming.

I picked up the last of the asparagus at the store.
I picked up one of the last six hams that were left in the store.
I got the last of the daffodils; there weren't even a dozen in the last few I grabbed.
They had plenty of eggs which I needed.
Thank heavens, they also had plenty of jelly beans.
I love jelly beans.
The store manager told me that he'd not gotten shipments in for the end of the week
due to storm early in the week.

As I left the store, the parking lot was filling up fast.
I was glad I made it there relatively early.

I don't think we will have an Easter egg hunt on Sunday.
It would be hard to find eggs in all this snow.