Thanks to the advancements in modern medicine, my husband now has the spine of a 26 year old.  In other words, he no longer has vertebrae that are rubbing bone on bone and cutting off the nerves that go to his legs.  Thanks to two gifted neurosurgeons, he is no longer feeling any pain in his lower back or his legs, and he is just three days post surgery.  Tonight, as the two of us walked around the halls of the hospital, I was amazed at how well he was walking.  He did not complain of pain, and he was standing more upright than I have seen him stand in a very long time.

Surgery day began very early.  I had to have him at the hospital at 5:30 a.m.  He kept insisting he would just drive himself and I could come by later after my appointment with my doctor in Denver.  Of course, I did not allow this to happen, but I must admit I was tempted when the alarm went off at 4:00 a.m.

At 7:30, he was all prepped and ready to go into surgery, but surgery did not really begin until 8:30.  Since I had to go to Denver for a 10:00 appointment, I left as soon as he was wheeled back to go pick up a dear friend who accompanied me to Denver.  The nurse in the OR called me every hour to update me on what was happening.  I arrived back to the hospital around 12:30.  Jim was still in surgery.  In the end, the surgery lasted between five and five and a half hours.  That is a very long time to be under anesthesia, but he seemed to handle it all very well.

The first night after surgery was spent on a surgical floor in a small room because the hospital was so full, they did not have a room for him in the area where they send back patients.  It was here where he received the visitor that really brought a smile to his face: Daniel the therapy dog.  Daniel actually lives across the street from us with our neighbor Janice.  Daniel is a very special golden retriever that was rescued by his owner, and now, he spends his time serving as a therapy dog.  I nearly cried when I saw Jim stroking Daniel's ears, patting his head, and talking to him.  I know how much he must miss his dear Boston.  Therapy dogs are wonderful.  Janice, thanks for sharing Daniel with us. 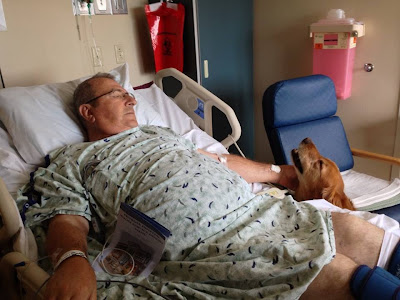 Thankfully, on Friday afternoon, Jim was sent down to the floor where the nurses are very familiar with caring for back patients.  He has been doing great as far as the surgery goes.  There have been a few little wrinkles that sometimes happen post surgery as the body adjusts to shock it has gone through.  I am confident all of these wrinkles will be be smoothed out soon.

This is the fourth major surgery I have gone though with Jim.  He has had both knees replaced, a hip replacement, and now, he had to have a spinal fusion and decompression.  He sets off all kinds of alarms when he goes through airport security.  Having gone through these past surgeries with him, I am amazed at how quickly he has gotten up and around this time.  I think the knees were the worst.  I think he would agree with me, but I'm not sure.

This man amazes me.  Truly, when his dear friend Woe nicknamed him "Nails," he knew what he was talking about.  "Nails" he is.  He is tough as nails that is for sure.  (Click on the link to read about how he dodged the bullet when he was 95% blocked in his LAD.)

Tonight, I have Boston our dear golden retriever home with me.  He has been kenneled since Wednesday.  He is sleeping at my feet as I write.  I am comforted and feel more settled with him by my side.  I hated coming home to this house from the hospital when I knew that neither of my special guys would be here.  Boston is missing his master.  I am missing him too.  I hope he is able to come home to join us in the next day or two.
Posted by Sally Wessely at 10:52 PM 32 comments: