Today, my fellow teachers in Pueblo, Colorado, are involved in the fourth day of a strike.  I hope to write more about this later, but this short post is to serve as an encouragement to those dear former colleagues, students, and friends now walking the picket line. 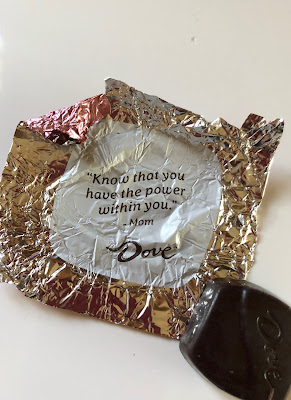 Each day after lunch I eat one, only one, piece of dark chocolate.
Today, the chocolates were wrapped in pink.
Pink the color the strikers are wearing.
Each chocolate piece has a message written inside the foil.
Today’s message:

“Know you have the power within you.”  signed Mom.


I had just read in my journal about an encounter I had many years ago when I took a stand against power in a school where I taught in the town where the strike is now taking place. I had written a letter to the person in power, a letter I had forgotten about, a letter I wish I now had in my possession, where I had spoken truth to power.

I told a trusted friend about the letter and worried about the ramifications of having written such letter to my immediate supervisor.  While I still was happy that I had written that private letter where I had said what needed to be said,  I worried about what the ramifications might be in the coming school year.  My trusted friend assured me I most likely would not be confronted because I had spoken truth to power and in speaking that truth I had exposed this person’s less than professional actions that he had taken towards me.  Beyond speaking truth to power and exposing the wrong behavior, he said I had shown this person that

he couldn’t
intimidate me
because
I had
personal power
that was
willing to confront
his underhanded ways.

Teachers, keep up the fight.

Know you have great power within you
because you are willing to confront
those whom would seek to intimidate you
and silence you
to keep you from using
your awesome voices
for change.

Posted by Sally Wessely at 12:23 PM No comments: