Back Fence Neighbors and Conversations 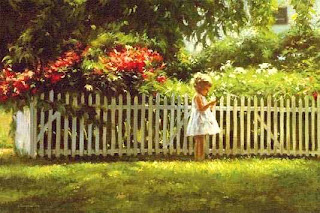 The backyard of my childhood home is enshrined in a special place of my memory.  Mostly, I have happy memories of that place.  I visit it often when I think of simple times and happy, carefree activities.  After all, it is in this place where I formed my fundamental beliefs about life.  It was there where I established how I thought the world should look, and how it should function.  It was not a dull place, nor was it unexciting.  I think I mostly had an underlying feeling of curious expectancy each time I went into the backyard to play or to observe life.

Life was pretty much self-contained  within the neighborhood of my childhood.  The city block where our home was built was just one block from my grandmother's home, the place where my father and his siblings had grown up.  Across the street from my grandmother's home was the church that we all attended.  Next door to the church was the elementary school where we went to school.  Across the street from the school, at the end of the block where my grandparent's lived, was a small neighborhood grocery where we bought a loaf of bread for our mother and couple of pieces of penny candy for ourselves.  As I said, as children, we seldom ventured far beyond the fun filled few blocks where we lived.
Our neighborhood block was configured in such a way, that sections of the block were more conducive for particular types neighborhood interaction.  The block must have contained about 19 homes that had all been constructed between the years of 1900 and 1924.  Some homes were small bungalow types, while others were large Victorian types.  Some had small lots with no garages or sheds in the back. Other homes were built on large lots.  All of the lots on the block could be accessed by an alley.  In fact, the block had a total of four alleys.  As children, we named each alley in order to have a frame of reference for where to meet if were going hide from the younger kids.
I noticed that while the kids loved playing in the alleys and observing life from the alley, our parents rarely ventured across the alley to see what was going on in another quadrant of the block.  My mother mostly connected with the neighbor who was her closest confidant on the block.  She was her "back fence" neighbor.
In my memory, Gordon, that is what we called my mother's "back fence neighbor," forever looms in my mind as the model of what a neighbor should be.  When I was very young, she lived in the house on the west side of our home with her son and daughter, who were twins, while they were in high school.  Her husband passed away when I was an infant or young child.  After her children left home for college, she moved into the small cottage behind the large Victorian house on the east side of our home.  She spent her days teaching home economics at the Colorado School for the Deaf and Blind.  I still remember her coming home after work, driving her car into the garage, entering her little cottage.  Not long afterward, she would emerge from the house into the yard with her hose (the type of stockings her wore!) rolled down around her ankles laced up shoes.  (I'm sure she must have removed her garter belt as soon as she walked in the door!)  She was ready for some backyard fence talk.
Or, I remember Saturday mornings when my mom and Gordon were each in their own backyard hanging out the laundry.  Before long, laundry time also became a time for sharing some back fence talk.  They talked about everything.  I know this because I used to try and listen in.  Mostly, I was just shooed off out of earshot distance because it was grown-up talk time.
I love those memories of a time when life seemed so much more simple.  I know there were problems in the world.  World War II was just over.  Money was tight.  Gordon was a widow trying to make it alone.  My mother, an only child, whose parents had died before I was born, must have really appreciated this older woman in her life.  For me, as a child, I saw the importance of having a friend who was a neighbor and neighbor who was a friend.
Now, we live life so differently.  Few of us have backyards, and if we do, the fences are six feet tall!  We no longer hang our clothes out on the line, thank God! Times have definitely changed.  With all of the progress that we have made in the last forty or fifty years, I can't help but think about how much we have lost from those days when we spent time in the back chatting over the fence, or on the porch chatting with the neighbor from next door who stopped by by lemonade on a hot summer afternoon.  I think mostly the art of knowing how to connect to one another in a real live conversation is being lost.  I worry that our grandchildren could start to believe that being shut in the house connected to technology is a good substitute for having a real conversation.
I love technology and the way it allows me to connect to so many people in a myriad of ways.  I would be lost without my BlackBerry.  I check FaceBook several times a day.  I love my blogging friends.  I love reading their news.  I love learning new things from them.  I delight in their stories.  I laugh at their humorous rendition of what is going on in their sphere of existence.  I am grateful for Skype when I visit with my son in Bangladesh.  I love communication in any form.  Having said all of that, I must say that I am most grateful that I learned the importance of community connections and conversations while I was still a child growing up in my beloved neighborhood in the Shook's Run area of Colorado Springs, Colorado during the '50's.  Those were the days...

My Life As An Educator

In this post, I'm sharing an article that I wrote for the Fall 2010 issue of  "The Colorado Communicator," a newsletter for the Colorado Council International Reading Associate.  Serving as co-editor for this newsletter is one of my "retirement jobs."
My Life As An Educator
During the summer of1965, just before I was beginning  upper level courses that I hoped would lead to a degree in elementary education at what was then Colorado State College, The Office of Economic Opportunity began an eight-week summer program that would launch Project Head Start.  Across the country, there was a rush to hire tutors and teachers to serve the over 560,000 children who would enter this newly created program.  It was my good fortune to be hired as a tutor to work along side of other  early workers in Head Start in beginning a “comprehensible program for preschool children that would meet their emotional, social, health, nutritional and psychological needs."
I wish I had kept a journal of those days because now, nearly 44 years later, my mind is a bit fuzzy about it all. Young and idealistic, I had great dreams about the kind of educator I would become.   Coming of age during the 60's,  I embraced the Civil Rights Movement and the "new" ideas about education, but I also respected and looked up to those who had been in education for a long time.
My mentor for the summer of 1965 was Idelia B. Riggs.   As I reflect back on her now, I consider this consummate educator as one the best with whom I have had the privilege to know throughout my entire lifetime.  She must have been in her sixties when I was a young college student.  She had already taught everything from kindergarten to college.  She had even been the principal of a one-room schoolhouse at one point in her career.
Mrs. Riggs knew what children needed to grow and to prosper educationally, emotionally and socially.  She embraced the ideals behind Project Head Start and imparted them to me as she spoke of all of the reasons why she believed the program could be successful.
She said that the children of poverty in the our local area were beginning school without the skills that other children brought to school.  Sometimes, they didn't even know how to use indoor plumbing.  Yes, in 1965, in our program in Leadville, Colorado, some of the children did not have indoor plumbing.  We had to teach them how to use the bathroom facilities.  Many did not receive proper nutrition at home and were undernourished.  They lagged behind their peers in knowing how to grasp a pencil or how to turn the pages of a book. Many did not know the alphabet.    Many did not know colors or shapes.  They did not have group or personal social skills.
Project Head Start’s comprehensive program was based on a belief that  school readiness was achieved by giving the children equal portions of playtime, story time, art activities, and basic academic preparation such as learning how to recognize and form letters through reading and writing.
Our lead teacher, Mrs. Riggs was a very practical woman who put up with no nonsense from anyone.  Her character was stellar.  She saw her role as an educator as one as a public servant.  She was not interested in feathering her own nest or building her career.  She was there for the children she taught and for the families she served.
In my mind's eye, I see her now.  She is wearing an apron with pockets so she would have "a place for those tissues to wipe a child's nose or tears," or as a place to keep stray crayons, pencils or rubber bands that she might need while she was teaching.  Patient, kind and loving, she was also demanding when it came to giving something your best efforts.  We ALL learned from her.
Now that I have retired as a classroom teacher, it is nice to reminisce about those days of both my own personal and the national idealism that abounded  60's.   Mrs. Riggs, and the ideals of Head Start, greatly influenced my philosophy of my own role as an educator. I am grateful that I came of age as a person and as educator when programs like Head Start were new and fresh and perhaps idealistic.  Those early lessons and philosophies, rooted deep in my heart,  are still driving my passion today as I serve CCIRA in supporting teachers as they strive to make sure that all children are on The Road to Literacy.
Posted by Sally Wessely at 10:02 AM 5 comments: