Early this morning, as I was reading the newspaper in the newspaper room I heard chirping coming from the nest of baby birds that is located over the front entry way of our porch.  Thinking that the babies must be getting ready to spread their wings and leave the nest, I ran and got my camera to try and get some pictures.  In the past, Momma Bird has not liked me coming to the front door to try to snap her photo as she feeds her babies. Last week I was able to get a quick photo.  I could not see the babies in the photo below, but once in a while, without my camera in hand, I would see a baby poke up a little beak. 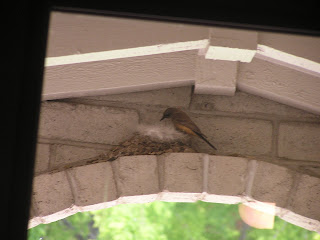 Today was different.  Not only were the babies bigger and more clearly seen from my vantage point, but it seemed that Momma Bird was also willing to have me watch her without flying away.  I guess she must be getting ready to let go of her babies and let them leave the nest to fly out into the big wide world.  I will be sad to see them go.  They have been such a blessing to me during this time of mourning.  I have intently watched the mother care for her babies knowing that she too must let them fly someday.  While the day of watching these sweet babes fly away will be sad for me, I can plainly see that they are almost ready to go.  Not only that, they are getting a bit crowded in that small nest. 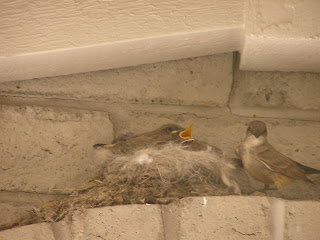 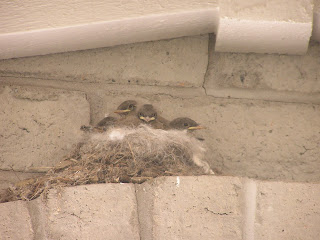 Since I already had the camera out, I decide to go out to the backyard to take some photos to send to my son since I had recently re-done a small walkway.  Before he left for Bangladesh, I had told him he could finish the walk the next time he was home.  I think he was surprised to hear I had actually fixed the walkway and wanted a picture to prove it. 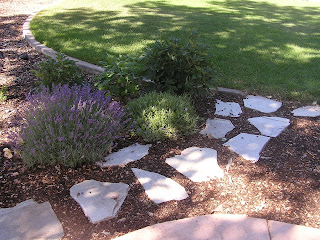 So here it is:  the walkway between the lavender and the rose bed.  (The rose bed is not showing because there was not enough light to get a good photo.) I'm quite proud of that little walkway that Jim and I did all by ourselves without Jon's artistic eye and flexible back and knees!  I had harvested lavender from one of the plants last week and was thinking how I needed to get out and get the other one harvested, when I saw a bumblebee getting some sweet nectar from the unharvested plant.  I hope you can see the bee in the photo below. 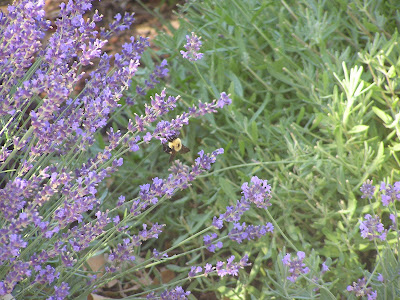 Moving from the east side of the yard to the west, I realized that today was the perfect day to work in the perennial garden on the west side.  It had rained last evening, so the weeds could be pulled easily.  It was cooler this morning, and the house was still shading that part of the yard.  Before I went to get my  husband and put him to work, I snapped a few photos of the perennial garden.  The wind and the rain had bent the delphiniums over, but I thought they still looked quite lovely. 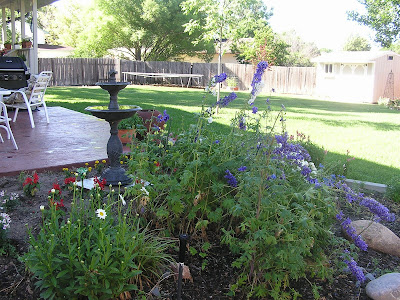 To the left of this photo, the part that I did not photograph, was the worst part of my yard.  It was actually a weed patch that was covered with all kinds of weeds and a load of dirt that I had dumped there last year because I didn't know where else to put it.  All of this mess of weeds and dirt sat on top of fabric weed guard that the landscapers had talked me into putting down a few years ago when I got rid of the rock in the backyard.  I never wanted the stuff, but let myself be talked into it by the landscapers and my husband.  Sure enough, just as I thought, weeds had just grown on top of it making it even harder to get rid of the weeds and expand my garden.  Since early spring, I have very slowly tried to pull up the weed guard.  Think about pulling up carpet that has dirt, mulch and weeds on top of it.  That is what my task was like.

Today, I decided it was finally cool enough to really go to work on this ugly patch.  I am not totally stupid, so I enlisted the help of my main man who happens to be very strong and good at pulling up carpet, or as he did in the old days, pulling shingles off of roofs. 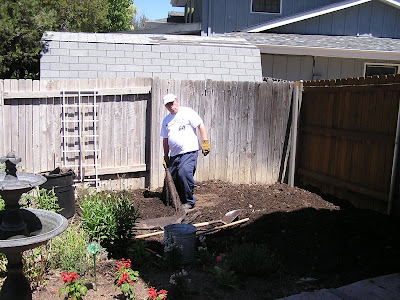 We are nearly done with our job in this photo.  I don't know if you can see the look on his face, but he is pretty tuckered out.  He is holding some of the fabric guard in his hand.  The garbage can to his right was the second one we had filled with fabric weed guard and weeds.  We had to shovel dirt, pull weeds and then pull up the weed guard to get this done.  Finally, just as the shade was nearly gone, our task was done. We won't have to go to the Y today! 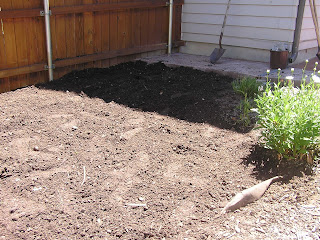 Jon wanted a photo of the daisy in bloom, so I have included that. 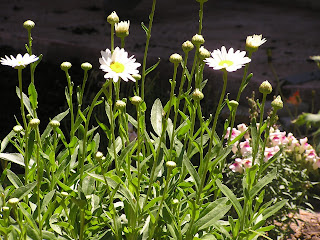 Just as I was ready to put the shovels away, take the camera inside, and rest, I saw one more photo op. 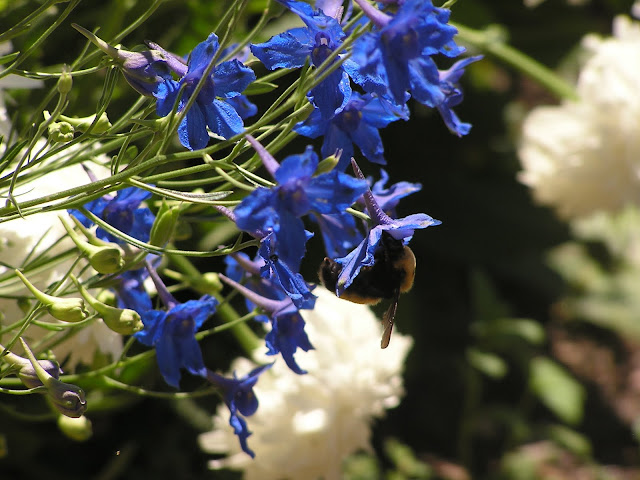 I'm not sure you can see this, but it is another photo of a nice big bumblebee getting some more nectar.

My mother sent me a card this week to lift my spirits.  Inside she had enclosed a quote about gardening.  "Gardening is about enjoying the smell of things growing in the soil, getting dirty without feeling guilty, and generally taking the time to soak up a little peace and serenity."  ~ Lindsey Karstens ~

This year more than ever, my garden has been a place where I can work, grieve, and find much peace and serenity.  In the garden, I find the Giver of all comfort.

Lord, You made me laugh
even when I felt like crying
Lord, you made me sing
even when my heart was aching
Lord, You let me hide in You
when the sky is raging, raging,
raging
I know the sun always shines after
the rain