Do You Need A Body Reset?

Imagine getting the following text from one of your friends:

How do you reset your body back to its original factory settings?

Please don’t say it is kale.

We’ve all been there, haven’t we?  I know I have.  Tell me I’m not alone.  There have been times in my life when I desperately needed something that would reset my body so that I could feel like my body was being sent in for an overhaul.

At those times, if kale were the answer to “reset my body back to its factory settings,” I’d eat kale for breakfast, lunch, or dinner.  Or would I? I might for a few days; then, I’d become bored with eating all that kale and probably be on to next magic bullet.

In truth, there have been times in my life, when I could have written such a text because my body was so out of balance that my mind and spirit followed the same downward spiral to the point where I probably would have tried any crazy fix just to feel better.

For instance, in February of this year, my husband and I traveled to Sedona, Arizona, to celebrate my birthday.  As we left home, I knew I should probably cancel the trip because of the pain I was experiencing in my gastrointestinal tract that came on with a vengeance seemingly out of nowhere.  This was not a new phenomenon for me, as I suffer from chronic IBS (Irritable Bowel Syndrome).  When the symptoms hit last February, I decided to ignore them as I was determined to make the long planned trip. So off we went from our home in Colorado and headed south to New Mexico.  We planned to spend our first night in Albuquerque, New Mexico which was the halfway point to our destination.

When in New Mexico, what does one eat?  One eats spicy Mexican food of course.  That was not a good plan for me, but I threw caution to the wind and ate yummy, fatty, and very spicy food.  As I ate, I tried to convince myself that it really would not matter what I ate.   (I was wrong about that!)

The next day was my birthday.  We arrived at our destination and found a nice restaurant for dinner.  My birthday was duly celebrated with some rich entrée, wine, and a decadent dessert. Just what I needed to make my poor tummy all the more upset.  It was my birthday, and the stubborn self was going to celebrate it in style.

Do you ever do that?  Or better yet, the question should be asked, WHO does that?

The next day, we visited the Grand Canyon for the first time. 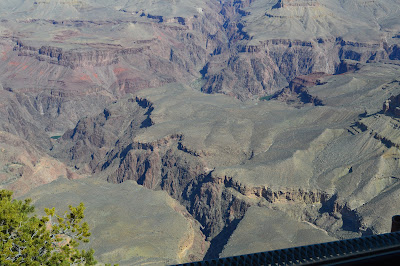 I was in terrible shape.  Pain from a full-blown IBS attack and exhaustion from the pain were making me miserable, but I kept on going.

As we visited the rim of the Grand Canyon, we visited a visitor’s center to learn more about this marvel of nature.   The explanation of how that vast canyon was created rang true to me as I felt that I too was on the verge of collapse.

Hard resistant layers?  That would be me at that moment.  I was not wanting to admit that:
a.   I was ill.
b.   It probably would be best to rest and not follow the previously determined schedule.
c.   I should make wise food choices when I know that my system can’t handle some of the food I really like to eat.
d.   I was in denial.
e.   All would not be well if I just carried on as usual.

Soft crumbly layers?
a.   That would be the body where I now live.
b.   My sensitive gastrointestinal system is fragile, and no amount of hard exterior is going to change its sensitivities.

While the crumbling layers of rock that formed the Grand Canyon created a natural wonder, after the third day of this trip to the Grand Canyon and Sedona area, I knew that if some changes in my thinking and in my choices were not made, the consequences of the crumbling going on inside would me would not create a beautiful natural wonder to behold.  Instead, I would most likely create a disaster.

Finally, on that third day, I told my husband that our plans would have to change.  We would have to take a day off from touring so I could get some medical help and so I could rest.  My husband fully supported me in that decision.  In fact, he’d been suggesting a change in plans since we had left home.

Not wanting to admit that something is wrong is a big problem.  For me, it meant that I would have to admit to my husband that I was foolish when I insisted on carrying on with plans when clearly, I was not well.  It also meant that I had been foolish to think I could eat what I wanted when I knew I really couldn’t without paying the price.  Denial is a very stubborn and resistant layer.

Those soft layers inside of my gut were crumbling, the hard layer of my stubborn nature was quite unstable.  Let’s just say I truly was on the verge of collapse.

Kale was not the answer to resetting my body in the scenario that I just recounted, but a sensible diet that include the types of foods I knew my GI tract could handle was.  I began to make wise food choices.  Just because I was on vacation, it did not mean that I could indulge in those foods I knew I could not eat.

I listened to my body.  I rested when I was tired. Together my husband and I restructured our plans so that we had activity that included walking and taking in the sights but did not include hiking that might have been more than my current condition could handle.

There was so much beauty to be enjoyed in Sedona. I often wonder if I would have even enjoyed any of it if I had not taken the time to have a serious talk with myself about practicing self-care whether I was not vacation or not.  Do others of you ever let self-care go out the window when you are on vacation?

In the end, I learned some valuable lessons about resetting my body.  No, I did not set my back to its factory settings while we were on this vacation because that would mean I would have to come up with a way to wipe away decades of living. Original factory settings are no longer possible. My body has changed.  New rules apply as I learn to live in a body which is different than the one I had in my forties, my fifties, or even in my sixties; however, small changes can do wonders when it comes to resetting a body that is begging for restoration to optimum health.

·      I began to listen to my body.
·      I made positive dietary choices.  (Those choices did not include kale!)
·      I rested when I need to do so.
·      I made sure I continued to exercise by walking and exploring the beautiful area where we were visiting.
·      I didn’t waste the experience by giving in to illness, but I let the illness instruct me on how to heal. 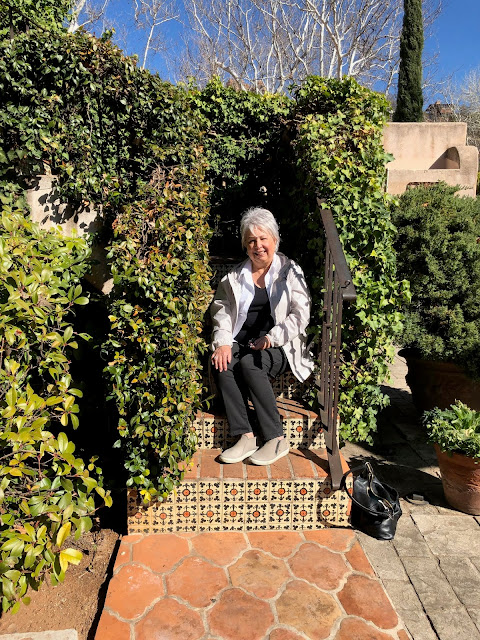 On our last day of the trip, I found these words written on a Coconino Forest Service sign in:

Listen
Can you hear the stream? 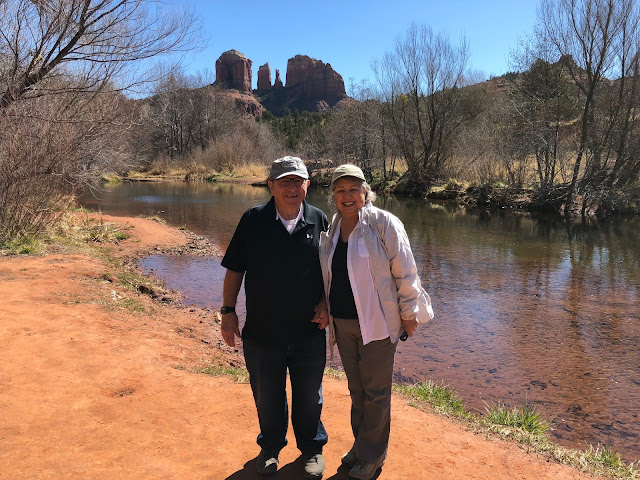 Touch
Feel a soft leaf or a sycamore. 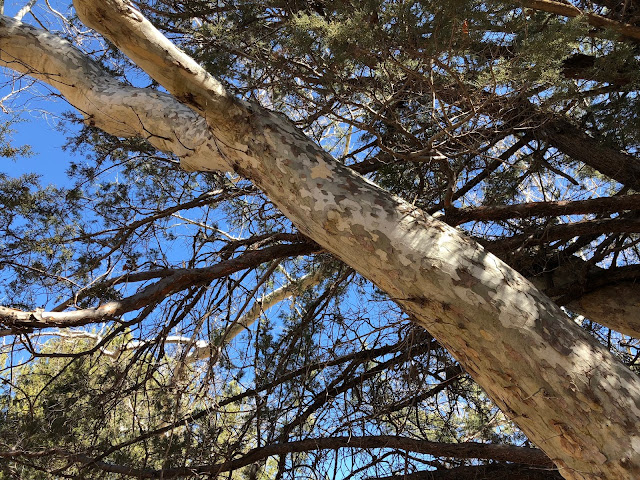 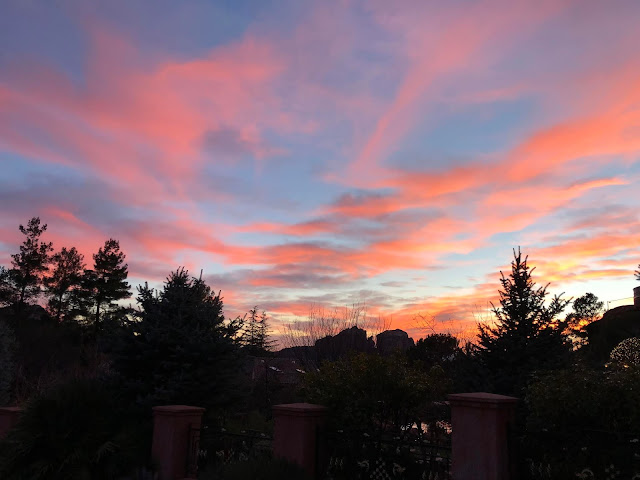 Answers to the questions such as the one asked by the sender of the text which I wrote about at the beginning of this post seldom have one answer.  Kale, while it is a healthy food, and a food most of us wish to avoid, is not the answer to gaining a healthier lifestyle.   Instead, I think we have to slow down and do these last three things which I found printed on a forest service sign.

We must listen to nature around us and to our bodies.  We need to touch the positive and beautiful things in our lives.  Yes, it is so important when things are out of balance to take time to get in touch with those things which are beautiful and positive in our lives.  That means we must change our focus.  We can't look on what ails us.  We must look to what heals us.  And finally, when we look closely, we can discover who it is that inhabits the body we now have.

Life is about change.  Nothing stays the same.  We will never live in the body that we were given when we left the factory. We must accept that and treat our bodies and minds and spirits with respect by giving all three what nourishes the body even if it sometimes includes, but is not limited to, kale.