My cellphone rang this evening.
The screen on my smart phone told me the call was from my grandson Mason.
"Hi Mason."
"Hi Grandma.  You know how you said your were sending me some money for my birthday."
"Yes," I replied.

Oops...
It turns out there wasn't any money in his birthday card.
"Let me check my checkbook," I said.
Sure enough.
There was a check made out to Gillian for her birthday money,
but I had forgotten to write out Mason's check.

His mother, my daughter, thought it was hilarious that I forgot to even write the check.
I guess I am losing it.
At least, I remembered it was his birthday.
I have five birthdays to remember in the span of a month.
Three birthdays in September and two in October

The story of my two October grandbabies...

One day fifteen years and nine months ago,
my daughter Amy called me with the wonderful news that she was going to be a mother.
I was so excited for her and for me.
I was thrilled at the prospects of having another grandchild.
However, with this wonderful news,
there was also a bit of an uneasy feeling in my heart.

My other daughter Keicha was trying to have a baby, but thus far, her attempts had been unsuccessful.
Just a month or so before Amy's happy phone call announcing that she was expecting,
Keicha had called in tears and told me she was trying in vitro fertilization one more time.
"If this attempt is unsuccessful, I'm not going through this again," she tearfully said.
Now, a month or six weeks later, Amy was pregnant.
"How will we tell Keicha?" I asked.

Still mulling over how to break the news of Amy's pregnancy to Keicha,
I answered a phone call from Keicha a few days later.
"Mom, I'm pregnant." was her happy news.
Only one egg was fertilized, but at least one egg was viable.
I let out a sigh of relief.
I then called Amy and told her she could call her sister with her happy news.
We had double happy news!

It was a bit of a scary few months in the first months of Keicha's pregnancy.
She was highly at risk of not seeing the pregnancy through.
Soon, it looked as if we would have two babies in October of 1998.

On October 4, 1998, my dear Mason Lloyd Hopfenspirger was born.
I was present at his birth, and even was blessed to witness it.
I was the very first person to see that boy.
That was a very special moment in my life.
Immediately, after his birth, there was a problem.
We were told he might not live through the night.
The next day, thank God,  all was well, and he looked like the healthiest baby in the nursery.
36 hours later, on October 6, 1998, my dear Gillian Marie Chapman was born.

Six weeks later, Keicha made the trip to Colorado from Utah for Thanksgiving so the cousins could meet for the first time.
Late at night, Keicha, Gillian, and Gillian's dad arrived.  I snapped a picture of the two girls showing off their new babies to each other.
I always laugh because each one only has eyes for her own child. 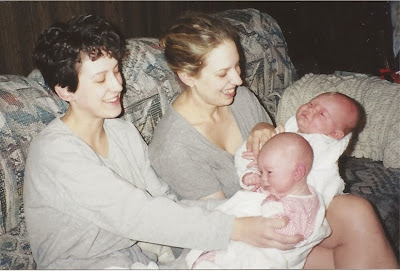 For the next photo, I had them both face the camera. 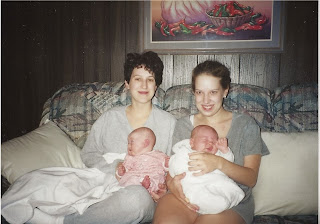 As you can see, I was one happy grandma with my arms full of two adorable grandbabies. 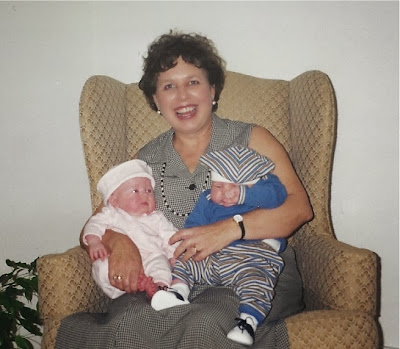 Over the years, these two cousins have had many photos taken together.
Aren't they cute? 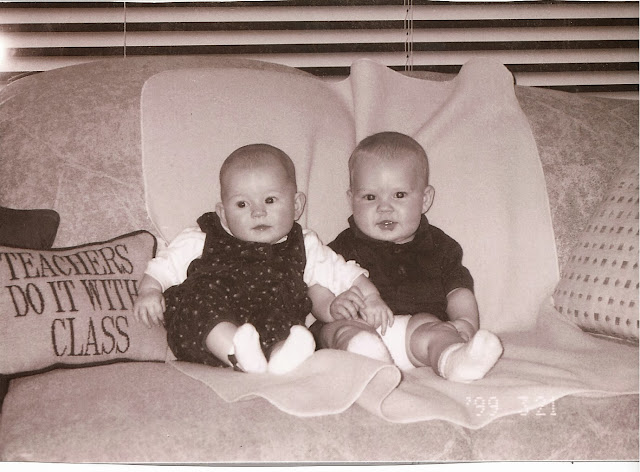 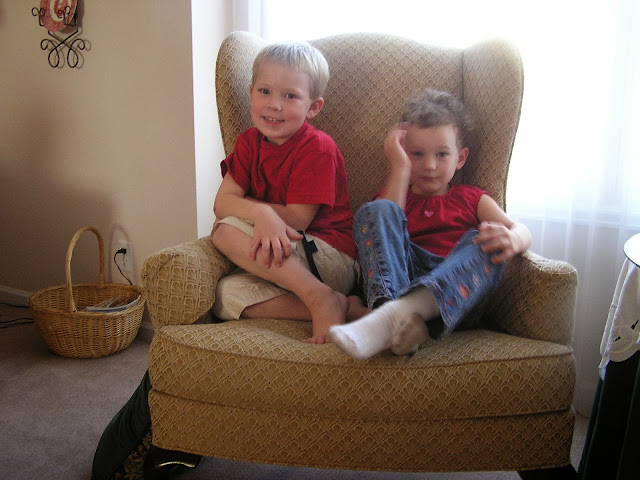 Mason hasn't always liked the attention and love that Gillian has shown him.
"It's embarrassing.  I don't want a picture!"

There have been lots of fun times at Grandma Sally's jumping on the trampoline, 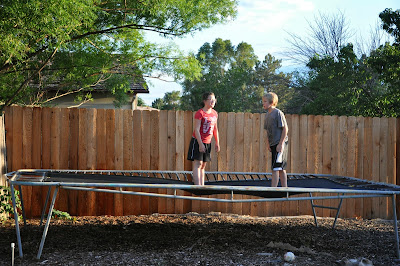 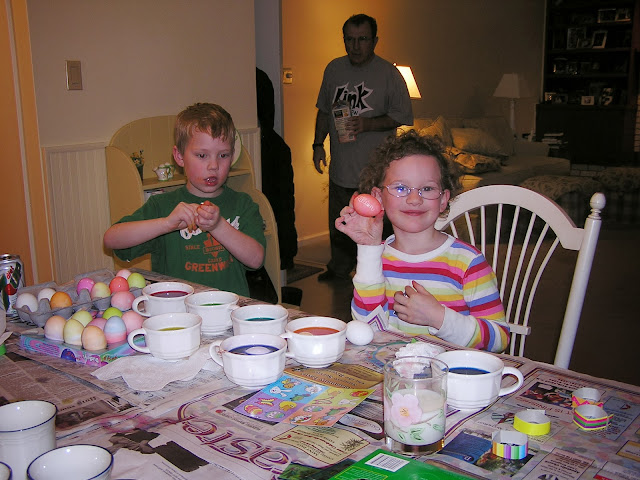 This happens even now that they are teenagers and almost too cool to dye eggs.

They've gone from this 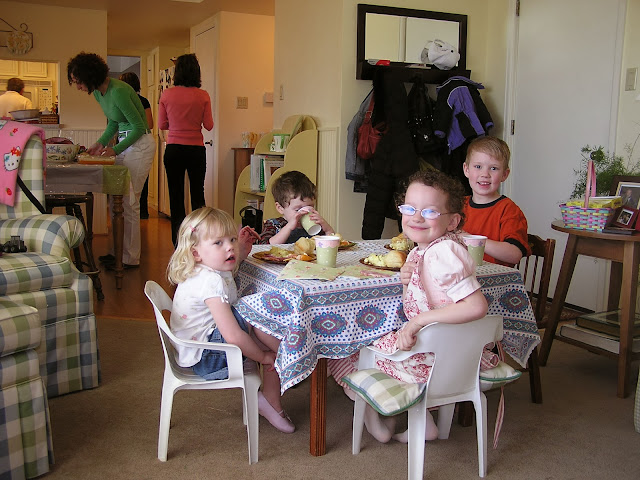 The table is getting a bit small.

This Easter, Mason showed Gillian some of his cooking talents. 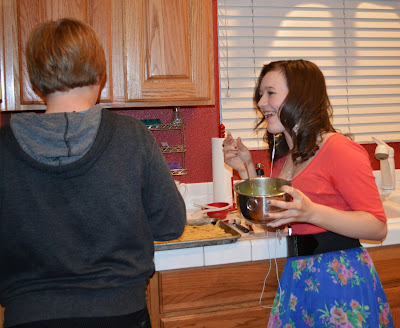 All of my babies are growing up.
Gillian and Mason are standing side by side in this photo of all seven of my grandchildren.

It is time we had a new family portrait!

I know one thing these kids still love to do.
They love to go to the penny arcade in Manitou.
This past April, we made our trip to the arcade for fun times.

Gillian vamped it up in my sunglasses as Bat Woman. 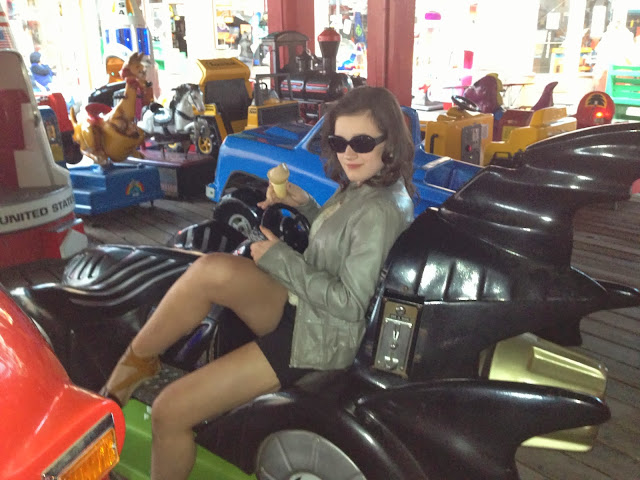 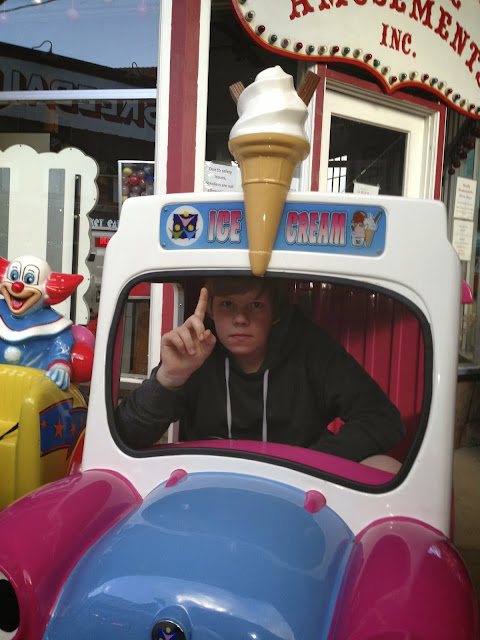 They have outgrown the kiddie rides.
They are growing up way too fast.
Where has the time gone?

This year, I somehow managed to get both birthday cards in the mail for these two grandchildren who are so close in age, but I forgot to write out the check for Mason.
I guess their old grandma is showing her age.

They are in ninth grade now.
The years have flown by so fast.
I hope they both always remember how much I love them and what a blessing they, and all of my grandchildren, have been to me.

Tonight, when I spoke to Mason, I asked,
"When are you going to go get your driver's permit?"
His answer was a true sign of the times.
"As soon as the government is open again."

Come on congress.  I have two grandkids that you are impacting.
They want to get their driving permits.
They are now in ninth grade, the year that American civics is studied.
They aren't getting a very good lesson from you guys in congress.

I digress...
this post isn't a political commentary.
It is a a lesson in family history.

I will put a check in the mail tomorrow for Mason.
I hope he doesn't think that adults just can't be trusted these days.
I told him to look for a check from me in his card since I didn't make up to his house
to celebrate his big day.
Oops, I forgot to put the check in the mail.
Please forgive me.
Gillian got her present.
Your's is on the way.