Thinking of My Dad

I'm in Utah staying with my daughter.  My granddaughter is downstairs making a Father's Day card for her father.  Since my father is no longer living, I no longer have the opportunity to tell him how important he was to me, or how important he remains in my life.


A Tribute To My Father


The day I was born, my father had to drive my mother to the hospital and then leave for Denver so he could be processed into the army.  At age thirty, he was drafted.  Uncle Sam still needed men, so despite his age and the fact that he had a wife, a child, and another child on the way, he was called up and shipped out.  He liked to say Hitler gave up when he heard my father had joined the army.  In truth, he never went overseas to fight.  He spent his time stateside working as a clerk.  He missed the first year of my life.  I'm sure I missed a lot not having him there also.  I've always loved this photo taken when my father came home from the service in 1946. 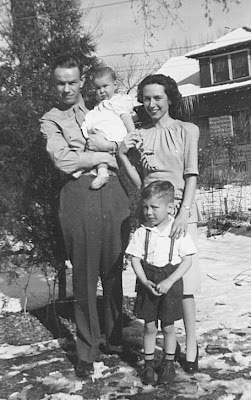 It seems difficult to write a narrative about this man who was my father.  I cannot be objective on the subject because I am his daughter and I adored him.  I thought he was terribly funny.  He was funny.  He had a dry wit and could think of the greatest puns.  He had the greatest sense of humor and told the best stories.  He always made me laugh.

I could listen to his stories forever as he drove through the beautiful mountain passes of Colorado.  He knew so much Colorado history.  He loved his native state of Colorado and taught us to protect her beauty.  We spent many happy hours camped along beautiful clear Colorado streams in the summer.  We were taught to always leave our campsite better than we found it.  We were taught not to leave a trace that we had been there.

My father was a reader.  He loved to read.  I learned to love to read because I wanted to be a member of his club.  Reading was such an important part of his life.  He could never understand people who didn't like to read.  He always had a book at his side.  As he got older and suffered from diabetes, he was so grateful for the lending library in Denver who sent him large print books on a very regular basis.

He also liked to write.  He wrote long letters to his children and his mother.  He wrote family histories.  He compiled family genealogy.   He wrote narratives about his childhood memories in Colorado Springs.  He had a large correspondence that he maintained with family members throughout the country who also worked on family genealogies.  I wonder if he would have written a blog.  I wonder what he would think of mine.  He submitted some of his writing about various topics to be kept in the archives of his alma mater, Colorado College.

Actually, Daddy never graduated from Colorado College.  He quit after marriage during the depression when he only had a few hours left to complete.  I don't know if he ever regretted quitting college with so few hours left to complete.  He went to work for the railroad and worked there his entire life.  He started as a clerk and retired as regional manager.  He was always grateful for the good life the railroad gave him, and the good retirement.  He followed his father's footsteps in working for the railroad.  His father was a telegrapher.  I am a railroader's daughter and have always loved the way my life was intertwined with railroad history and lore.  I love my memories of growing up riding on trains.

My father was a generous man.  He was one to always want to help those who might have a legitimate need.  The day before he died, we were gathered in his room talking to a nurse who was sharing her story of fighting cancer and how hospice was such a Godsend to many.  She told of her struggle to get well and to keep working.  We thought Daddy was not aware of what was being said that night.  When the nurse left the room, he said, "Mother, make sure you write a check as a gift to that nurse.  She needs some help."

Daddy was a strong Christian.  He had been a drinker, had a temper, and swore like a trooper when we were younger.  In his early 60's, he gave his life back to the Lord.  The transformation was obvious to all who knew him.  One of my favorite memories is remembering how mother would read the Bible to him every night before he went to bed in the last years of his life.  When he died, he was ready.  He kept saying he wanted to go and be with the Lord.

He was not a perfect man.  He scared off every boyfriend I ever had, or tried to scare them off.  He had a short fuse.  He was demanding.  I always said his bark was worse than his bite.

He worked hard.  He earned a good living and provided well for us.  He was not overly demonstrative.  He did not express his emotions of tenderness.  He was a product of his generation.  Men went to work and earned the money.  Women stayed home and raised the kids.  He expected good behavior out of us, and I lived in fear of disappointing him and bringing on his wrath.

Some of my most precious memories are of his final days on this earth.  I spent the last days at his bedside.  My sisters and my oldest son were there much of the time.  It was a blessing to be there and try to ease those last days that he spent in a body that had been broken down by diabetes and congestive heart failure.

I held those hands that I had always loved a lot of time.  I tried to memorize how they looked so I would remember all they had done for me throughout my life.  They had dug out a basement below our house.  They had remodeled more than one house that we lived in.  They had painted many walls and pounded many nails.  They had caught many fish.  They had held many books.  They had written many letters, memos, and narratives.  They had typed papers in the army on old fashioned upright typewriters and learned to write on a computer.  They had spanked my bottom on a few occasions.  They had been manicured by me when I was younger.  I loved to give manicures, and he was a willing subject.  I miss holding my daddy's hand.

I long ago forgave him of his shortcomings.  I've tried to live my life in such a way as to make him proud.  When I was working, I always used him as my role model on how to conduct myself in the workplace.

He was my daddy.  I was his Sally Lou.  I remember when he died that I was filled with absolute certainty that he loved me, that he was proud of me, and that seemed to be enough for both of us.