A Vacation in Winter ~ Our Trip to Florida

My husband and I have never taken an extended winter vacation before.  Since we retired, we usually travel in the fall.  Actually, we had not been on a long vacation since 2011, so it was time for us to get away from the demands of life and go someplace totally different than we had previously visited.

When this year's trip planning began late last fall, we decided to go to Florida.  We weren't sure when we would go.  Finally, we selected the second week of February.  Our thinking ran along these lines: February + Colorado = wintery weather of snow, cold, and grey skies.  We planned to celebrate Valentine's Day in Florida, and the trip was also to serve as an early birthday celebration for my milestone birthday that happens next week.

The first part of February in Colorado was very warm.  Most days the temperatures were mostly in the 60s or the high 50s.  I was wearing a sweater whenever I went outside.  So, I packed my summer clothes and off we went to Florida to bask in what we thought would be even warmer and sunnier days.  As it turned out, it was warmer in Colorado while we were gone than it was in Florida while we were there.  The cooler temps in Florida didn't impact us much.

It was pouring down rain when we arrived in Florida.  Thankfully, I had packed our two small travel umbrellas.  I had not packed the kind of clothes I needed.  My summer tops I took with me were never unpacked.  I wore the same cotton lightweight blue sweater almost every day over whatever else I was wearing.  I was grateful I had thrown in my old black fleece jacket just before we left. I lived in it.   I wished I had not taken my long pants and a long sleeved t-shirt out of the suitcase just before we left home.  I also wondered why I brought summer dresses.  Not only that, I never once put on a swimming suit in Florida, and I brought two.  I always overpack, but this trip, I generally made poor choices when it came to taking the right kind of clothes.   Thankfully, I did take tennis shoes and did not rely on wearing my walking sandals during the trip.  I never even wore the sandals that I took.  Do you ever pack all wrong for a trip?  I need packing help!

As I write this, the snow is piling up in outside my window at home.  It is very cold, so this seems like the perfect time to reminisce about out time in the Florida sun, even if it was not as warm as we had expected.  It's hard to believe that a week ago, I was basking in the sun on a sunny beach. 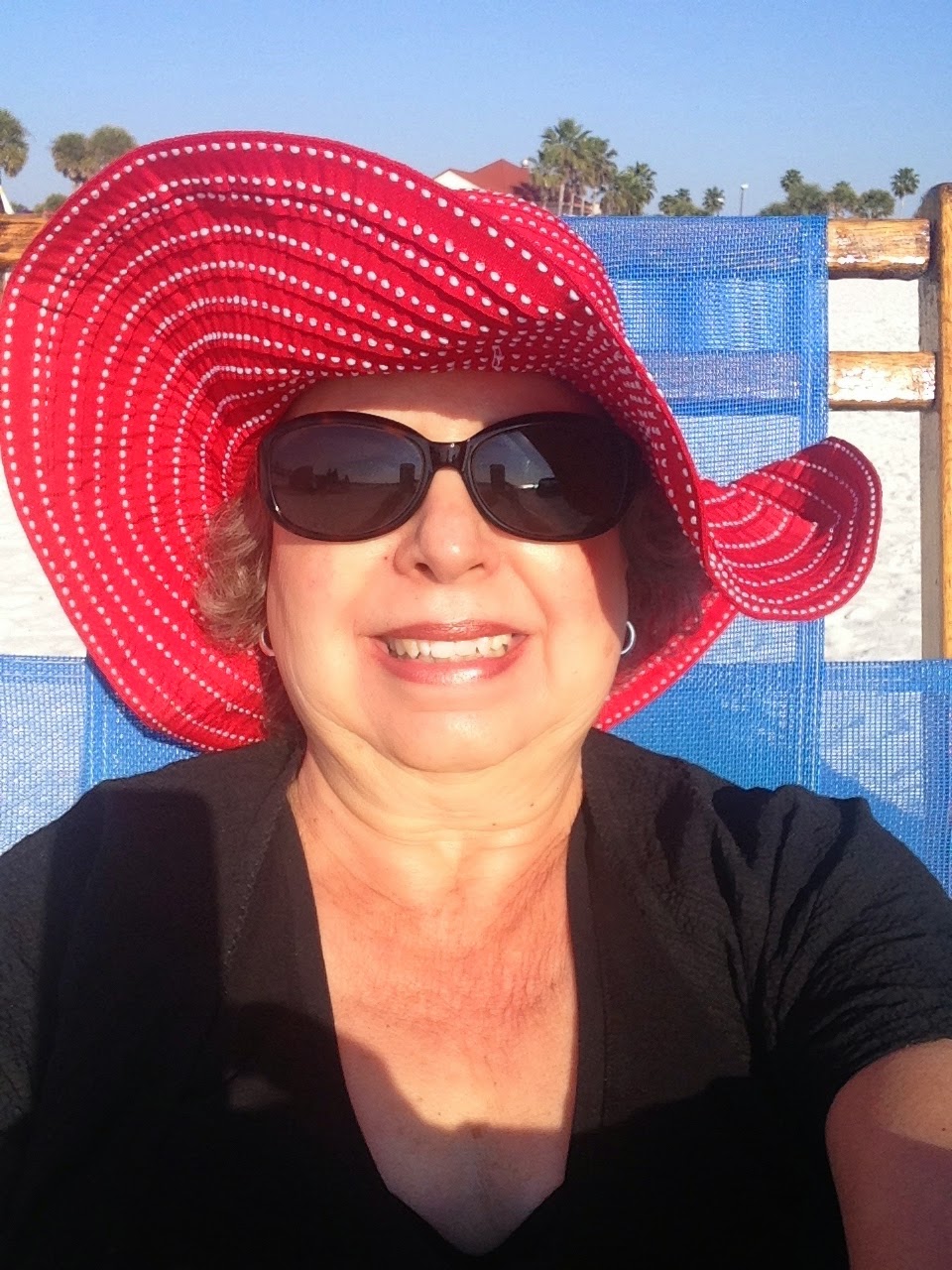 We tried to have a variety of experience on our trip.  Today, I will tell you about:

Neither Jim nor I had ever been to Florida before.  He has always expressed how much he wanted to go to Disney World.  He especially wanted to go to the Epcot Center.  Quite early in the morning on our first full vacation day in Florida,  off we went to the Epcot Center.  Before we left for our destination of Epcot,  Jim had used his iPhone to schedule fast passes for the rides he had in mind.  Armed with his "milk route" plans downloaded to his phone,  Jim was very excited to explore the place he had long wished to visit when he finally made it to this spot. 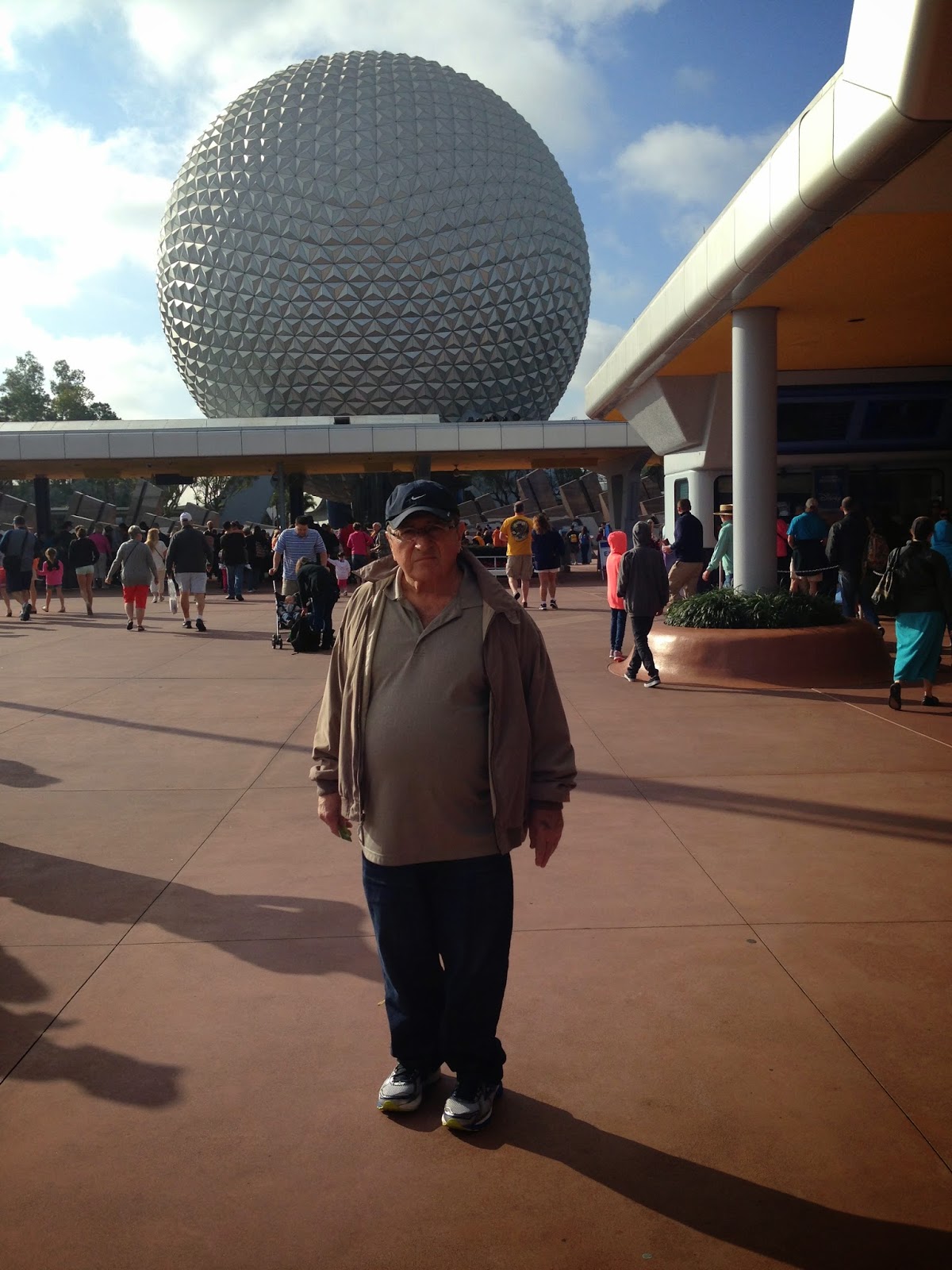 First stop was Soarin.  My wimpy side came out when we got to the ride.  I was just not sure how I would hand the heights, so I sat out the ride.  My husband was very disappointed that I didn't go with him, but he was understanding.  The next ride, Mission: Space, was one I for sure was not going to ride.  After checking out the vaious rides, we decided to explore the World Showcase part of the park.  Jim wanted to visit Mexico first, so off we went.

Epcot's World Showcase is certainly interesting, and we enjoyed walking around and seeing all of the various aspects of each country represented there.  While I greatly enjoyed the World Showcase experience at Epcot, after hearing about it from others for years, my overall impression of the experience was one of disappointment.  I think I had it pictured in my mind to be more like going to a World's Fair.  I remembered all of the wonderful pavilions from the various countries at the Spokane World's Fair of 1974.  I know it is not fair to compare a World's Fair to Disneyland, but I did, and Disneyland lost in comparison.

Jim and I had a wonderful lunch at Kringla Bakeri Og Kafe in the Norwegian area.  Norway was a popular place because of the new Frozen attraction.  I ventured into the gift shop to see how much those Anna and Elsa costumes that I saw all the young girls wearing cost.  They start at $49 and go up from there.  I saw some toddlers dressed in the dress, shoes, the tiara, and carrying Elsa's wand.  Some families had more than one child all decked out in the Frozen costumes.  Parents must have a lot more money these days than I had when my children were younger!  God help these parents when these same darling little toddlers go prom dress shopping.  They will expect a very expensive gown.

We saw so many kids at Disney World that we were actually very shocked.  We kept asking, "Why aren't these kids in school?"  We are after all retired educators.  I speculated that some might be on break from year round schools.  We wondered if some were "home schooled."  We just did not expect to see so many children out of school in the middle of the day in the middle of February.

We spent most of the day exploring the various countries in the World Showcase.  By 5:30 we were ready for the dinner Jim planned.  He had made arrangements for us to eat at France's Chefs de France.  We both thought our meal was excellent.  I had thought we would be going to a very fancy place and perhaps I should put on a dress for dinner.  Of course, one doesn't change to a dress for dinner at Epcot, and of course there was no need to dress-up.  The restaurant atmosphere was relaxed and informal, which seemed a bit odd given the price of the meal.  I enjoyed eating at Chefs de France and would recommend it to others.

After dinner, we were tired, so we decided to head out of Epcot and make our way to our hotel.  Realizing how far we were from the entrance, we wondered if we would make it to the gate given how worn out we felt.  On the way back to the entrance, we stopped to ride Spaceship Earth.  That was fun experience. 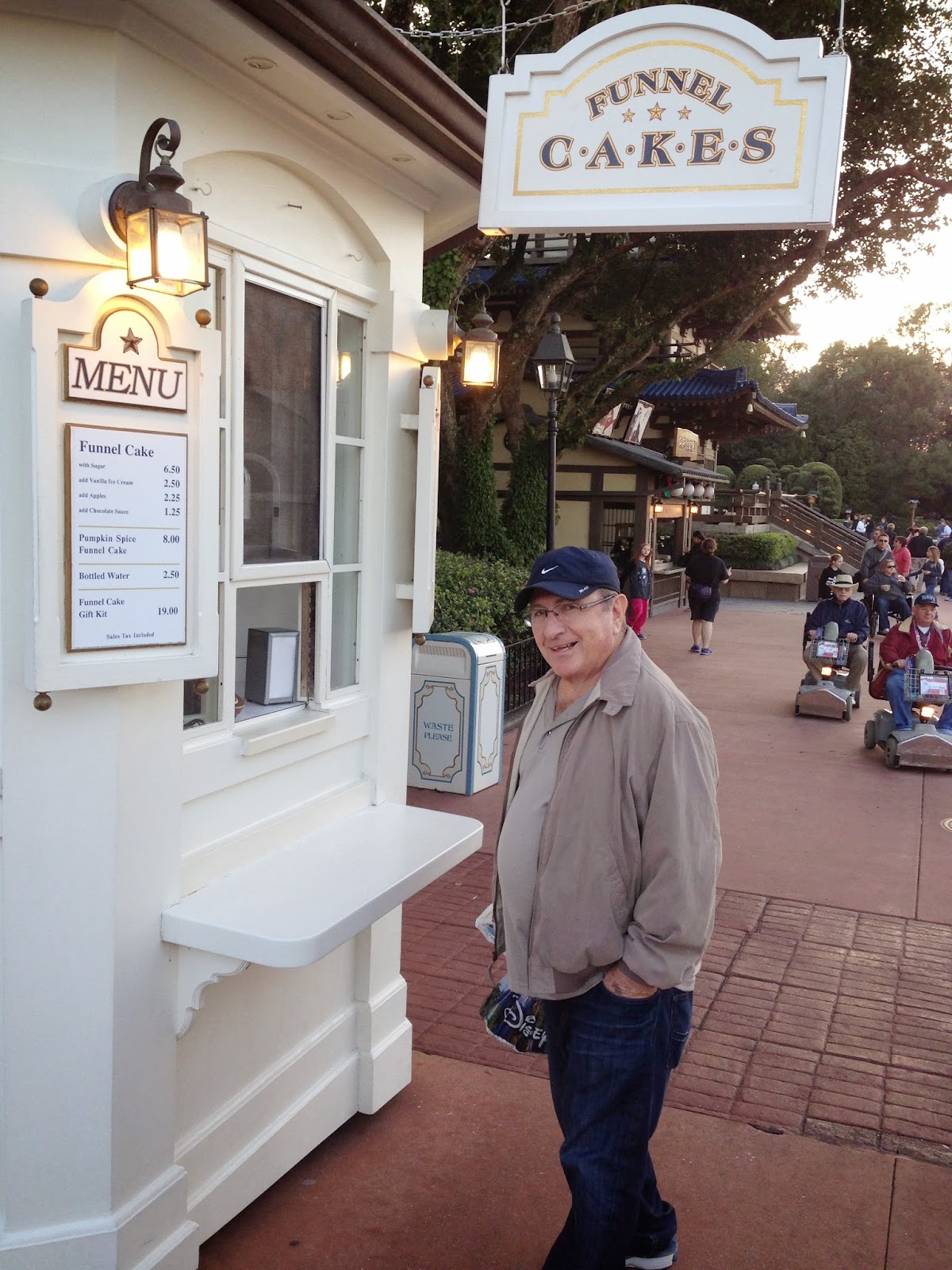 At the end of the day, Jim checked his pedometer.  We had taken 19,658 steps!  No wonder we were tired.  That equals nearly nine miles of walking.  We were quite proud of ourselves.

The next day, we didn't get up quite so early.  We also decided not to eat breakfast before we left for our day of adventure.  We had seen so many places to eat at Epcot, we thought we'd just eat at Magic Kingdom.  That was a very bad idea.  By the time we drove to our destination and took the ferry over to the entrance we both were starving.  Jim was beyond hungry when we finally got inside.  Because of our late start and late arrival, no place was still serving breakfast.  It was nearly noon.  The sight of others eating hamburgers and such made us both nauseous.  Finally, we were able to get coffee and breakfast fare at Main Street Bakery, which was really Starbucks.  We then had to find a place to sit down and eat.  Once we were fed, the day was off to a better start.

We really did enjoy Magic Kingdom.  We explored most of it and took in many of the attractions.  Jim again had scheduled the rides he wanted to take on his iPhone so we could have the fast pass and not stand in line.  First on the schedule was Big Thunder Mountain Railroad.  Jim didn't think I would want to go on the ride, but he was as excited as a little kid when he got to it.  I said I was up for the ride.  We took a selfie before we boarded for Thunder Mountain. 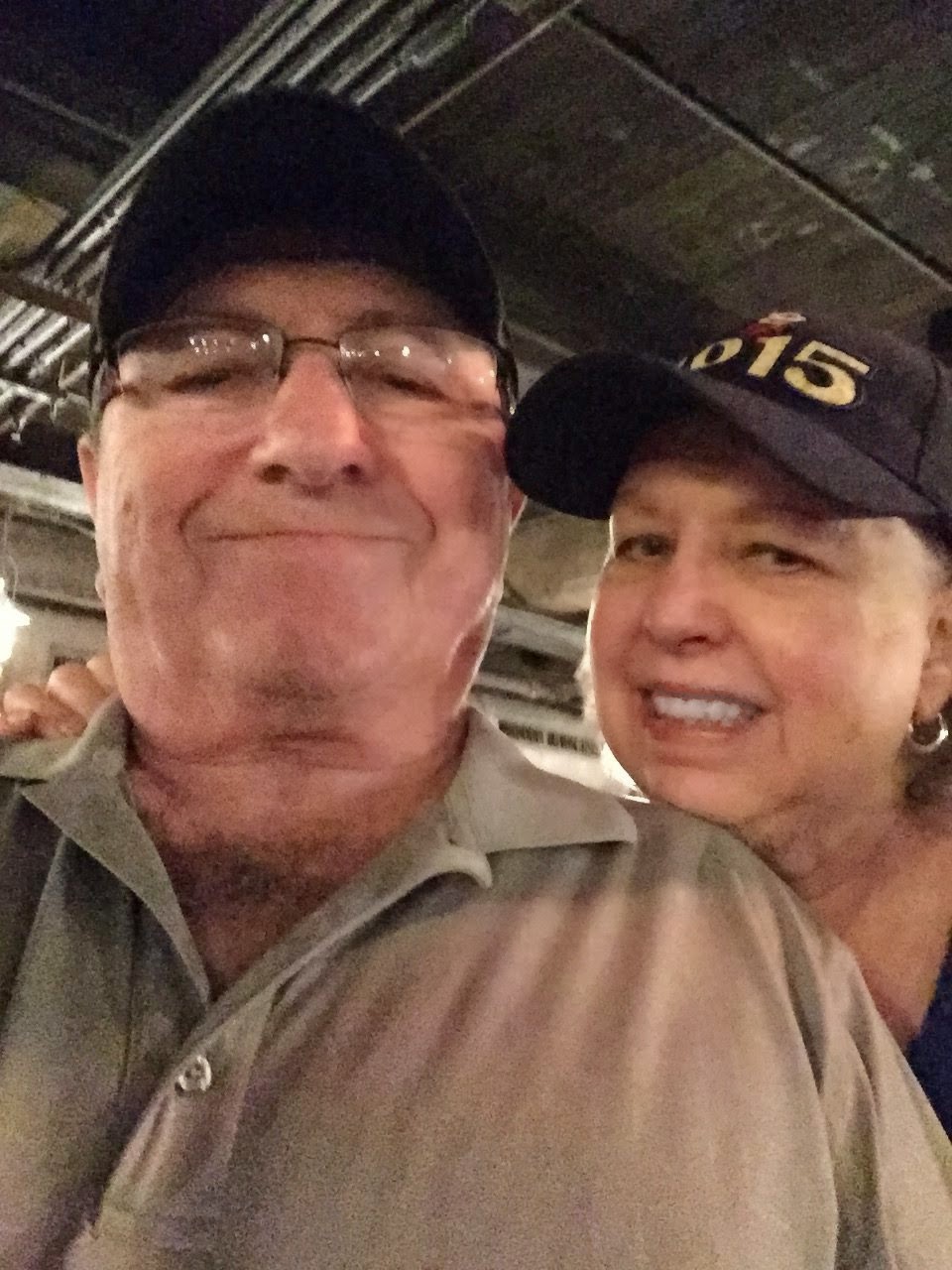 I guess Jim didn't know how much I love roller coasters!  I haven't ridden one for years because of my heart arrhythmia problems, but I decided that since I'd had the old ticker fixed with the ablation last summer, that I'd be able to handle the ride.  Sure enough I handled it.  I had a blast.  Mostly, I just loved listening to my husband laugh down each steep hill, and around every sharp turn.  His laughter literally thrilled my heart.  Here I am making my exit from Thunder Mountain.  (The hardest part was climbing out of those little cars.  I'm not as young as I used to be.) 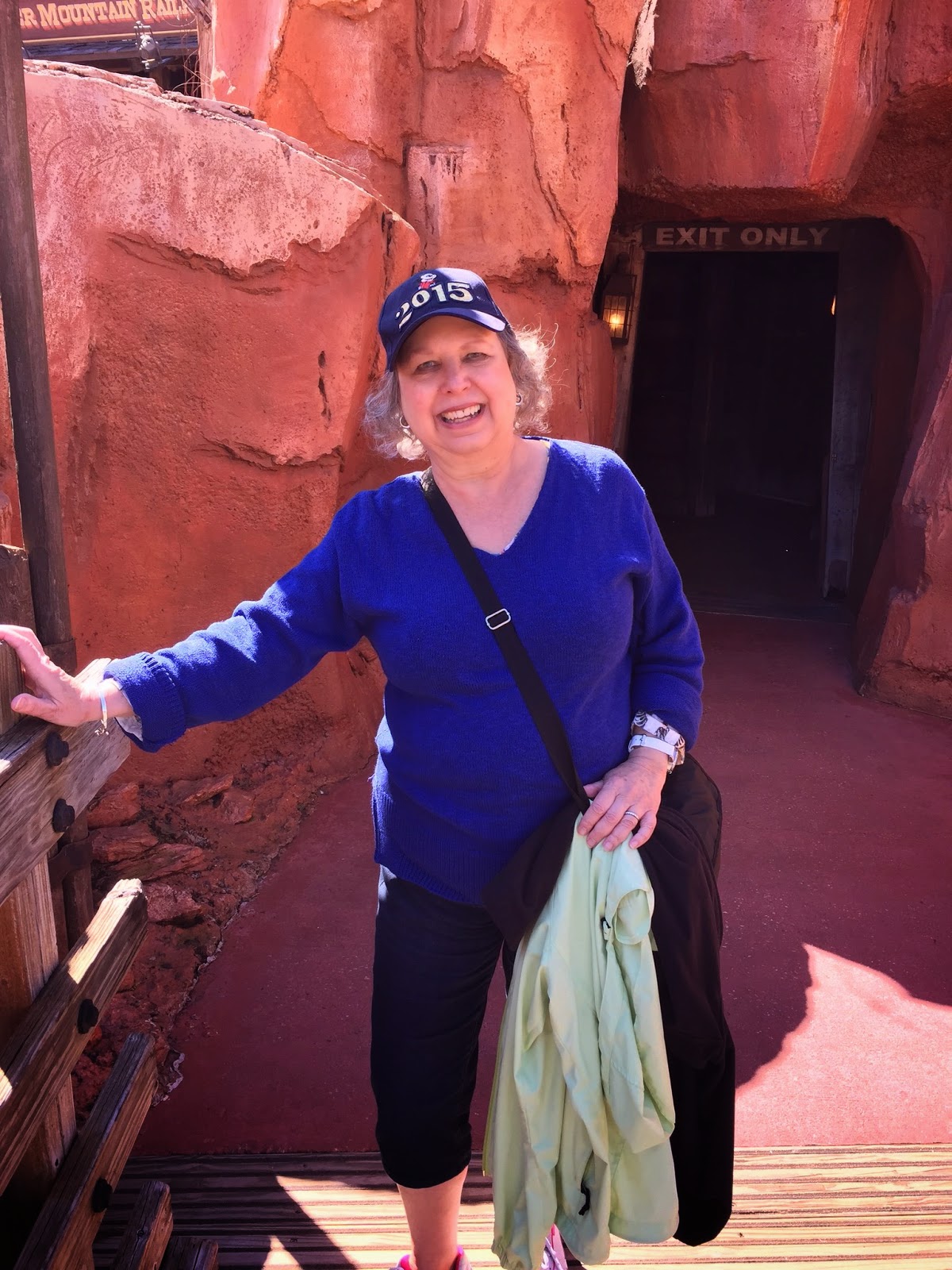 It was quite chilly the day we were at Magic Mountain.  In the photo above, I actually have on two sweaters, a cardigan and a pull over.  At times, I also layered on a fleece hoodie and the green windbreaker that I am holding.

When Jim headed towards Splash Mountain, I wasn't sure if I wanted to get wet.  Also, I like roller coasters better than I like rides like Splash Mountain, but I got in line for the ride.  Wouldn't you know it?  We ended up being placed in the first seat!  From the look on our faces, you might not think we were having fun, but we were!  Yes, we were absolutely soaked, but that was ok.  We made a great memory. 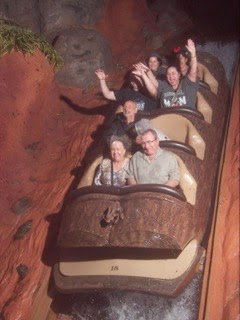 We decided to buy the photo of us on the ride.  Jim used his iPhone Apple Pay to pay for the photo.  The young clerk in the gift shop said he had never had anyone pay with Apple Pay before.  Jim was the first to use it.  The clerk was quite impressed with my soaking wet, 70ish, techie husband.  I guess we didn't look like or act like most of the grandmas and grandpas he had seen buying souvenirs for the grandkids.

We had a terrible lunch/dinner at Columbia Harbour House, but that was really the only bad experience we had at Magic Mountain.  What's not to love about a place where I can ride roller coasters and a carousel? 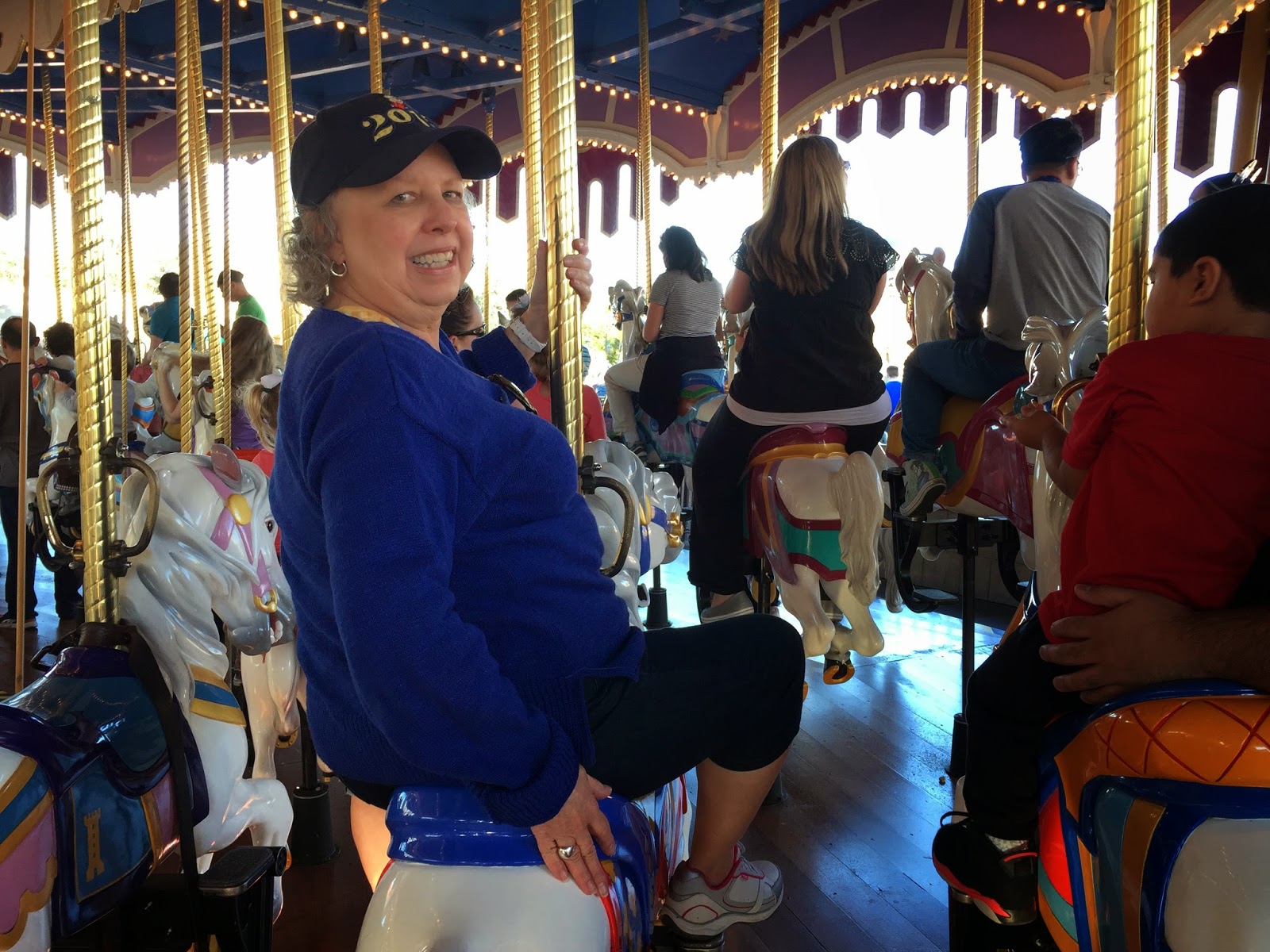 We only devoted two days of our week long vacation to Disney.  My favorite day was at Magic Kingdom, but I did really enjoy seeing and exploring Epcot also.  It was great fun being with my best guy exploring a place designed for kids of all ages.  We are still young at heart.