Our Trip to Moab

This winter has been so hard for so many.
For me, it has been especially hard
mentally,
emotionally,
spiritually,
physically.

I think it was the endless sieges of ill health that assailed my body that caused me to think that those days when the mind, soul, and body are renewed and energized by warm weather and sunshine would never again occur.
Several weeks ago, I bought three bouquets of tulips.
The snow swirled around my car in a blinding storm as I brought the flowers home.
Once home,
dressed in my snow  boots, and my warmest down filled hooded parka, I carefully made my way across the street to deliver a bouquet of tulips to my neighbor who had been housebound for weeks.
Independent, a lover of dogs and of flowers,
this neighbor had slipped in the middle of a city street and broken several ribs.
The injury had left her unable to do much of anything.
I knew she needed flowers as much as I did. 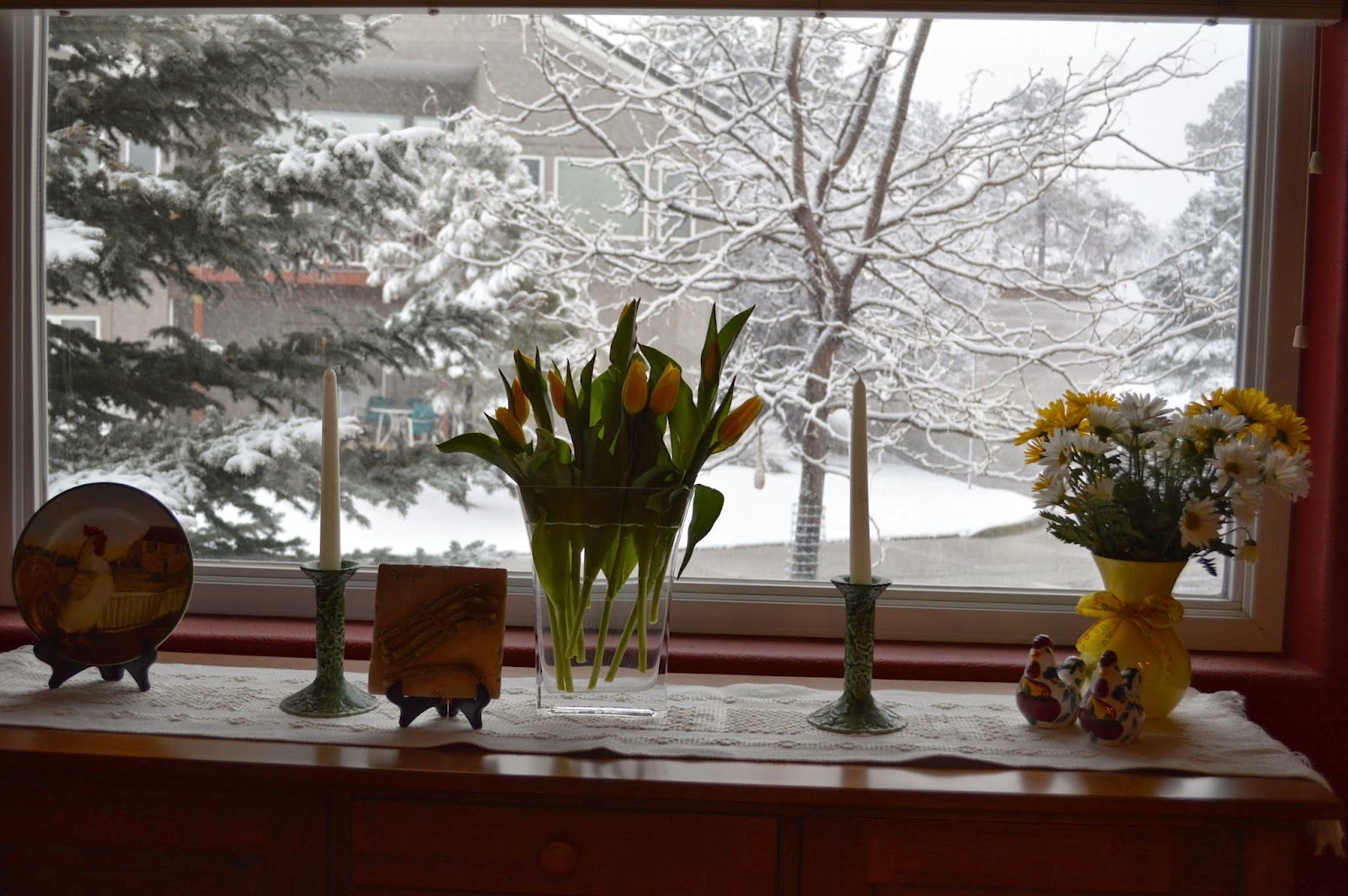 Once home, I arranged a few bouquets to brighten my own home.
Outside the kitchen window, the trees covered with snow provided a beautiful backdrop for the tulips and for the springtime flowers sent to me by my son for my birthday.
With flowers such as these in the house, spring could not be far away, I told myself.

The snow from this storm quickly melted.
But the earth near our home did not give me any indication that spring was coming.
I needed greenery.
I needed to see some yellow daffodils,
or some yellow forsythia.
I needed to feel the sunshine.
I needed a change of scenery.

Months ago,
my daughter had wanted to run a half marathon to celebrate a milestone birthday.
Most of my children and all of Jim's decided they would run with her.
Unfortunately,
life got in way for her, and she could not run,
nor could my other children because of injuries from training.
Jim's daughter's and his son-in-law trained all through the
long,
cold,
wet,
and windy
winter.
We wanted to make sure we supported their efforts,
so last week my husband and I left our home and headed to Moab, Utah.

As we drove over the high mountain passes where snow was piled higher on the sides of the road than I remember seeing  it in a long time, I began to wonder what the coming of spring would mean to the high country.
With all that snow, I worried about the danger of flooding as it melted.
Not even believing that I was expressing the sentiments I felt in my heart, I said to my husband,
"I hope we have a cool spring without any early warm days."
My head and heart knew that it would be best for all if we did not see a rapid melt of all that snow.
Still, I longed for a sign of spring.

Once we were on the Western Slope of Colorado, green began to appear.
I'd hoped my mother's daffodils would be blooming as a way of greeting me to her home.
We were a few days too early for that, but one bud had a slight yellow tip.
"There is that sign of spring I needed," I thought as I walked to my mother's front door.

We only spent one night at my mother's home.
The next day, following her suggestion, we traveled Highway 128 to Moab, Utah. (click on the link to see more about this highway and see photos of it.)
We stopped along the side of the road for a moment because my husband got a phone call.
With spotty cell phone coverage, he decided to stop and take the call where he had a good signal.
This provided the perfect opportunity for me to stretch my legs, and so I stepped outside the car and took a photo of the desolate land before us. 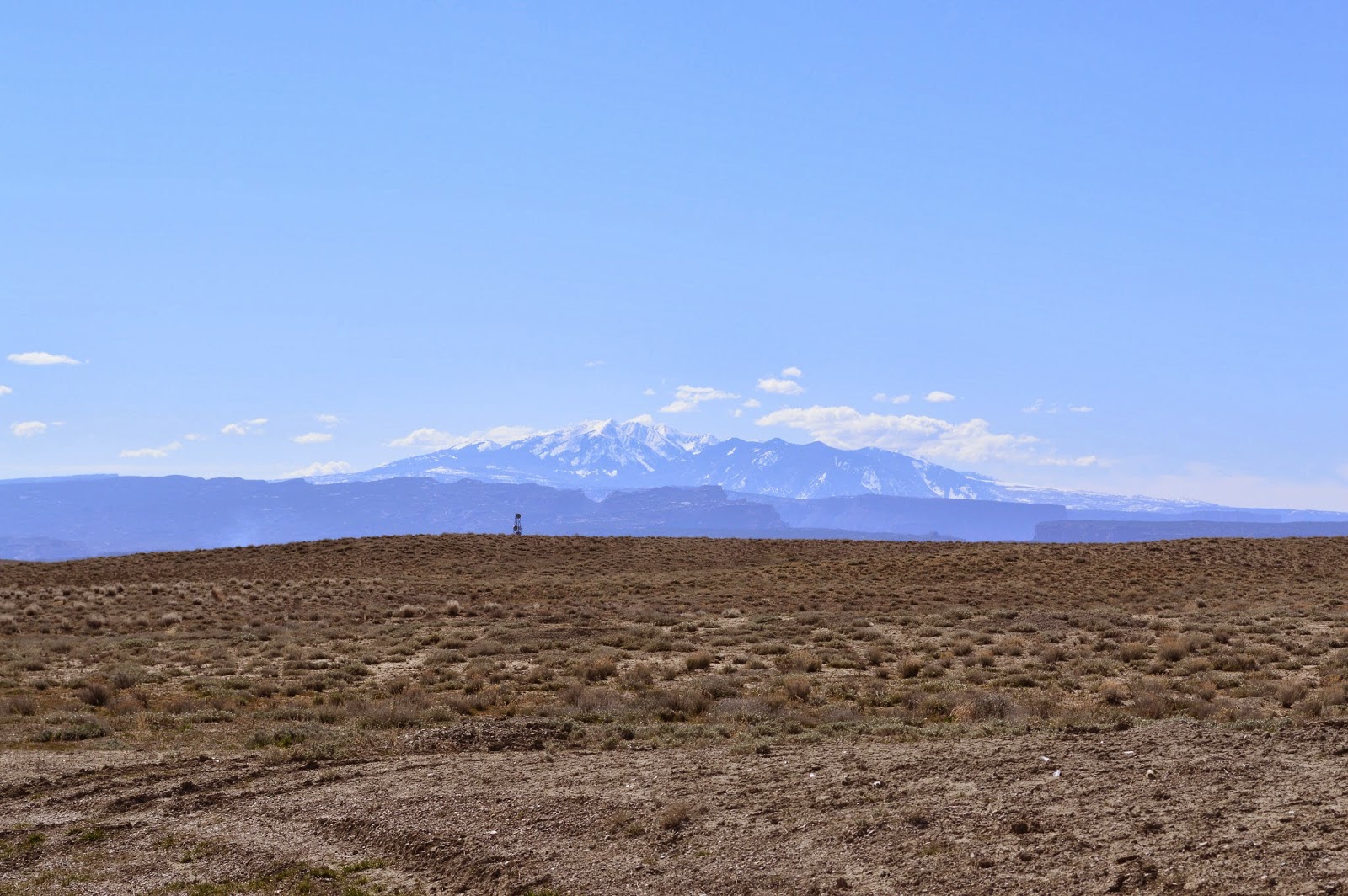 At this point in the journey, my husband, who had never been to Moab, or traveled this route, probably wondered why I had said this would be a beautiful, scenic route to take.
If you look at the base of the mountains, you will see the mesa like landscape that are the magnificent rock formations that are near Moab, Utah.

When we came to the place where the road crossed the Colorado River,
we saw the remains of the old Dewey's Bridge spanning the river.
I asked my husband to park the car in the Dewey's Bridge Campground.
This is the view of the rocks that are on the other side of the river from the river.
I had to get out and walk now that we were in a beautiful setting.
Just look at that sky.  What a beautiful day it was. 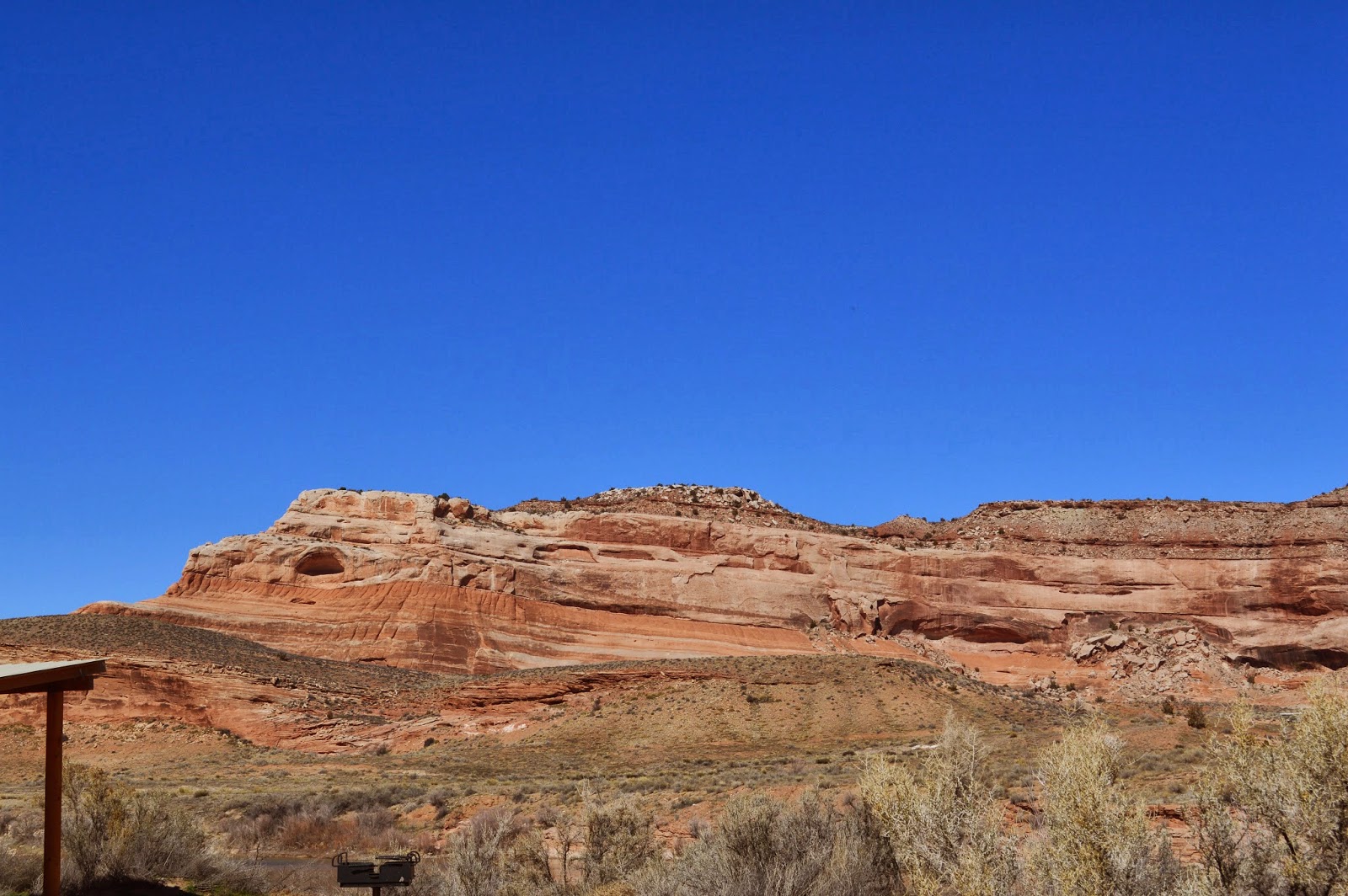 As we approached the bridge, I couldn't help but think how great it felt to again be out walking in air that was warm on ground that was beginning to show signs of spring. 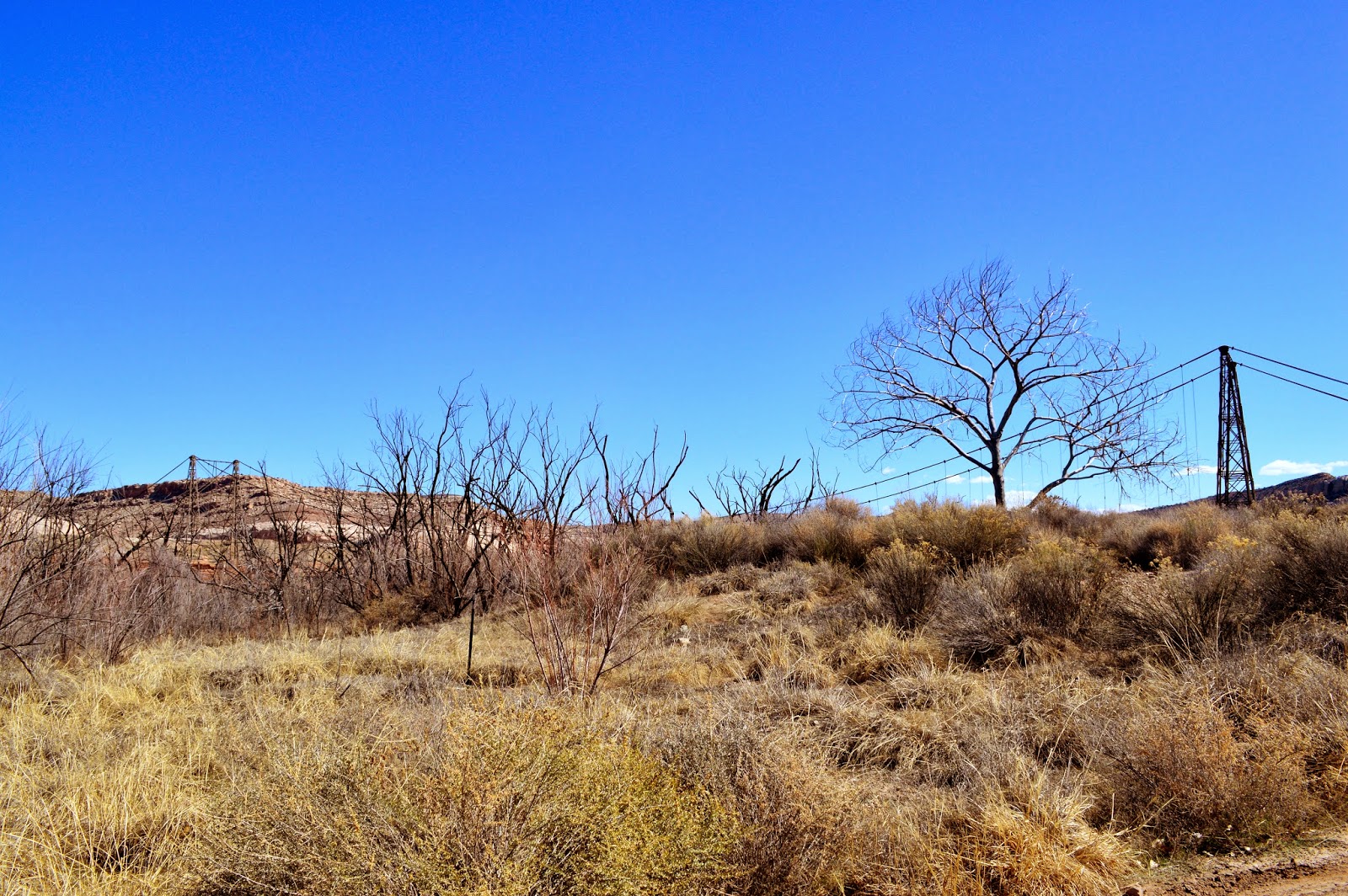 Built in 1916, the Dewey's Bridge has a wonderful history.
The wooden plank single lane bridge was the longest suspension bridge west of the Mississippi River when it was built.
It held many memories for travelers to this part of the country before it was burned down in 2008 by child playing with matches.

One can only imagine how intriguing it must have been to cross this once great bridge. 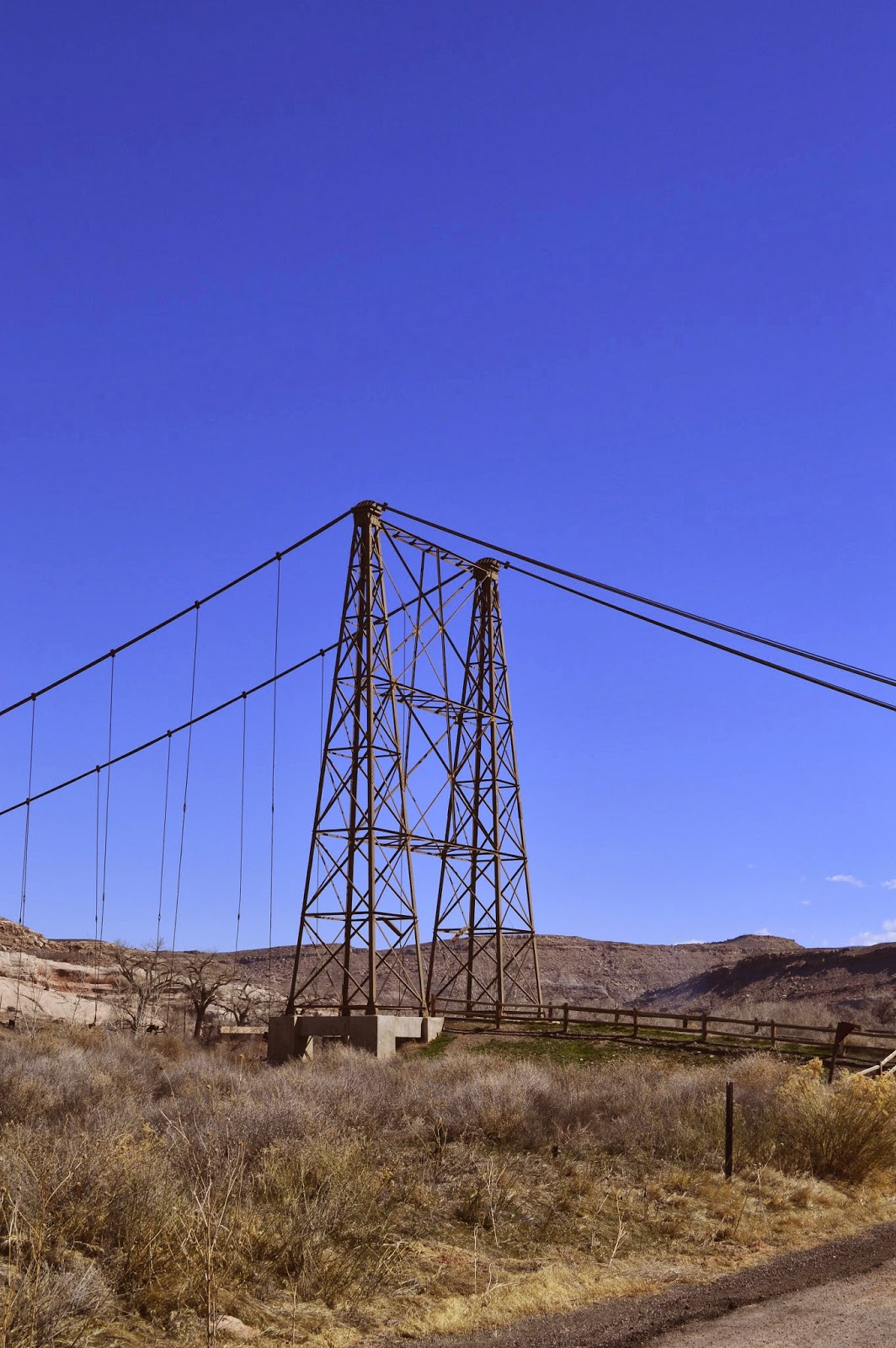 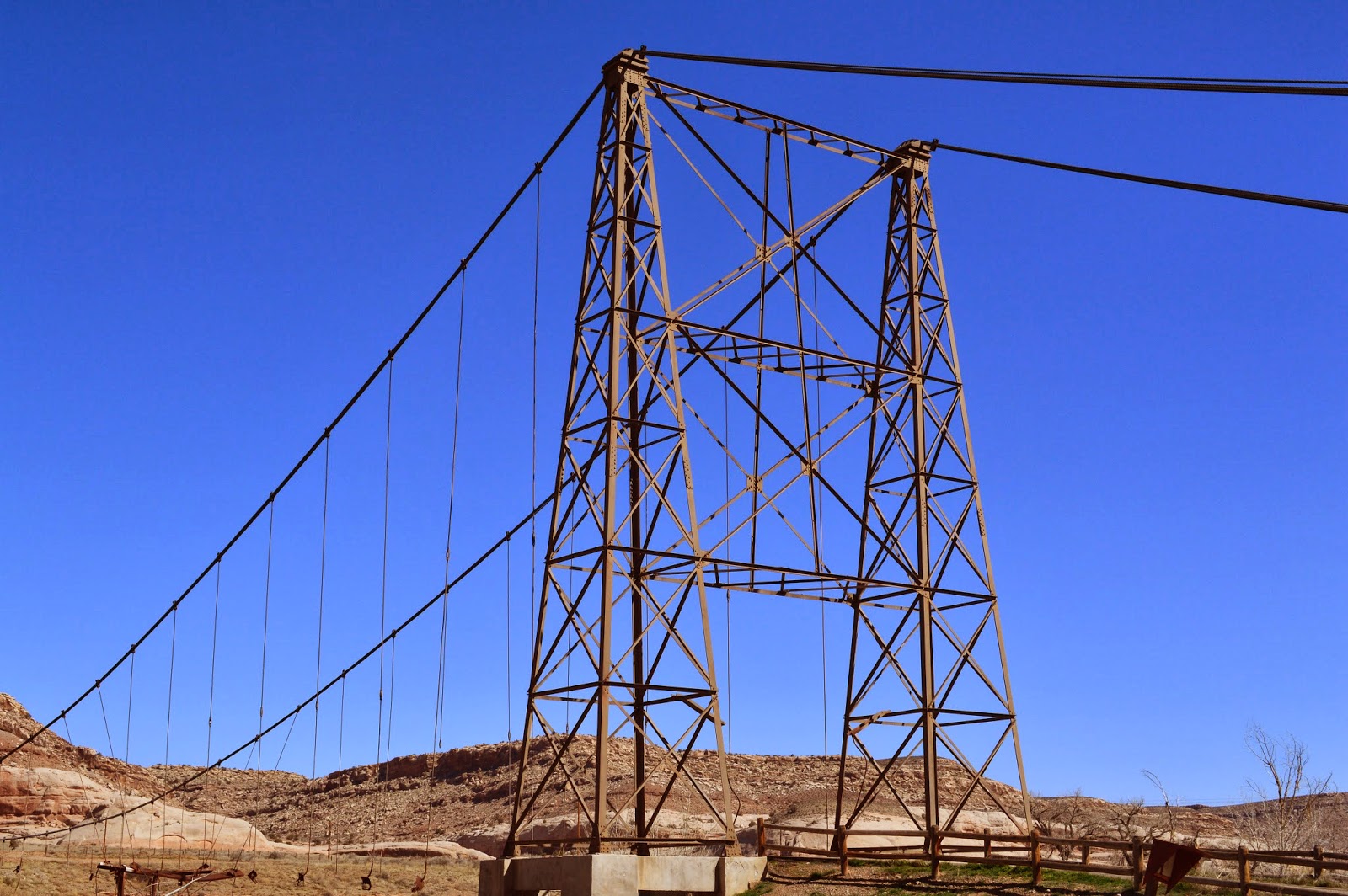 Cow now graze under where the planks of the bridge were supported by this suspension system.
(Do you see the black cows just right of center towards the bottom of the bridge?) 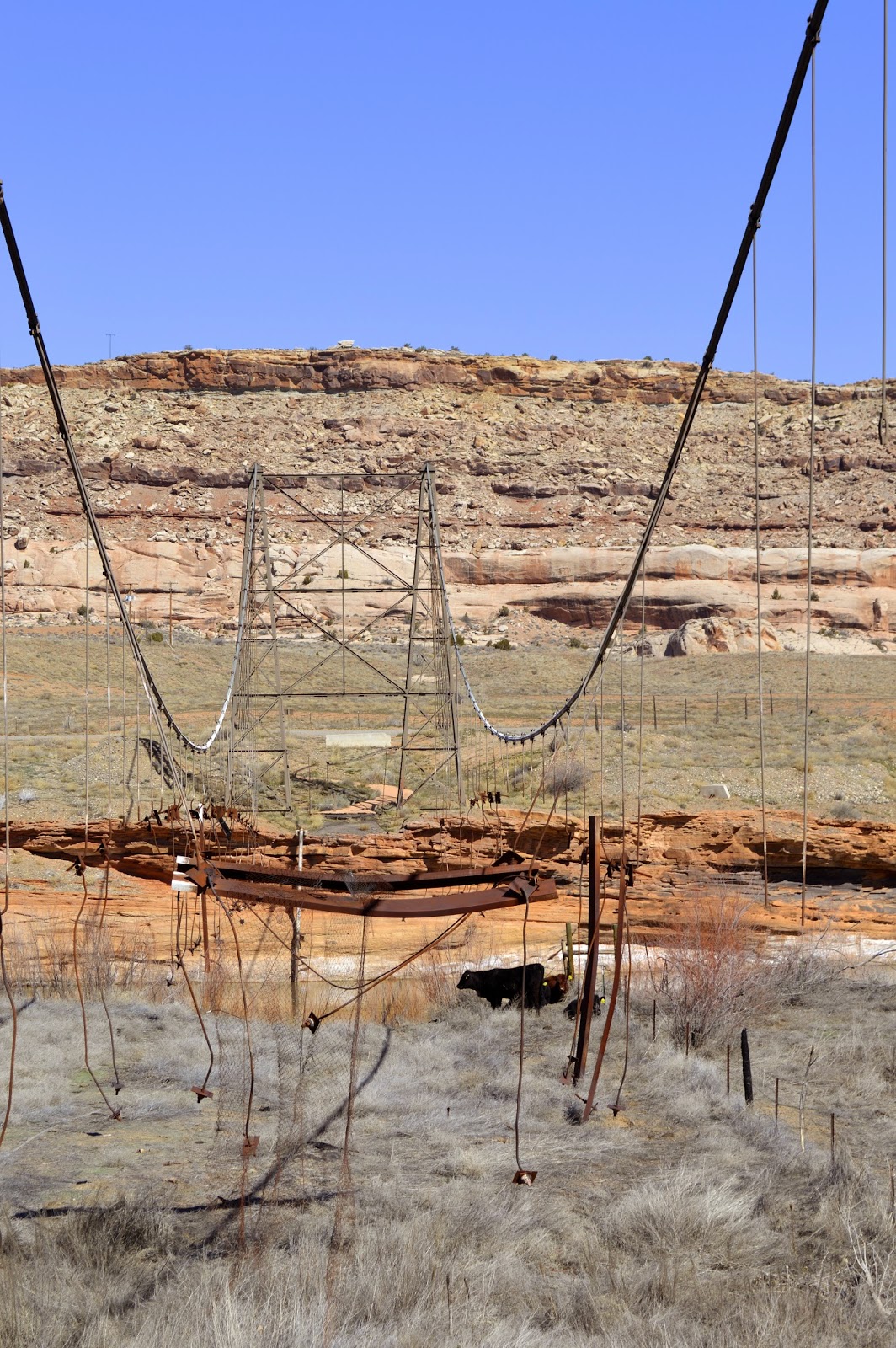 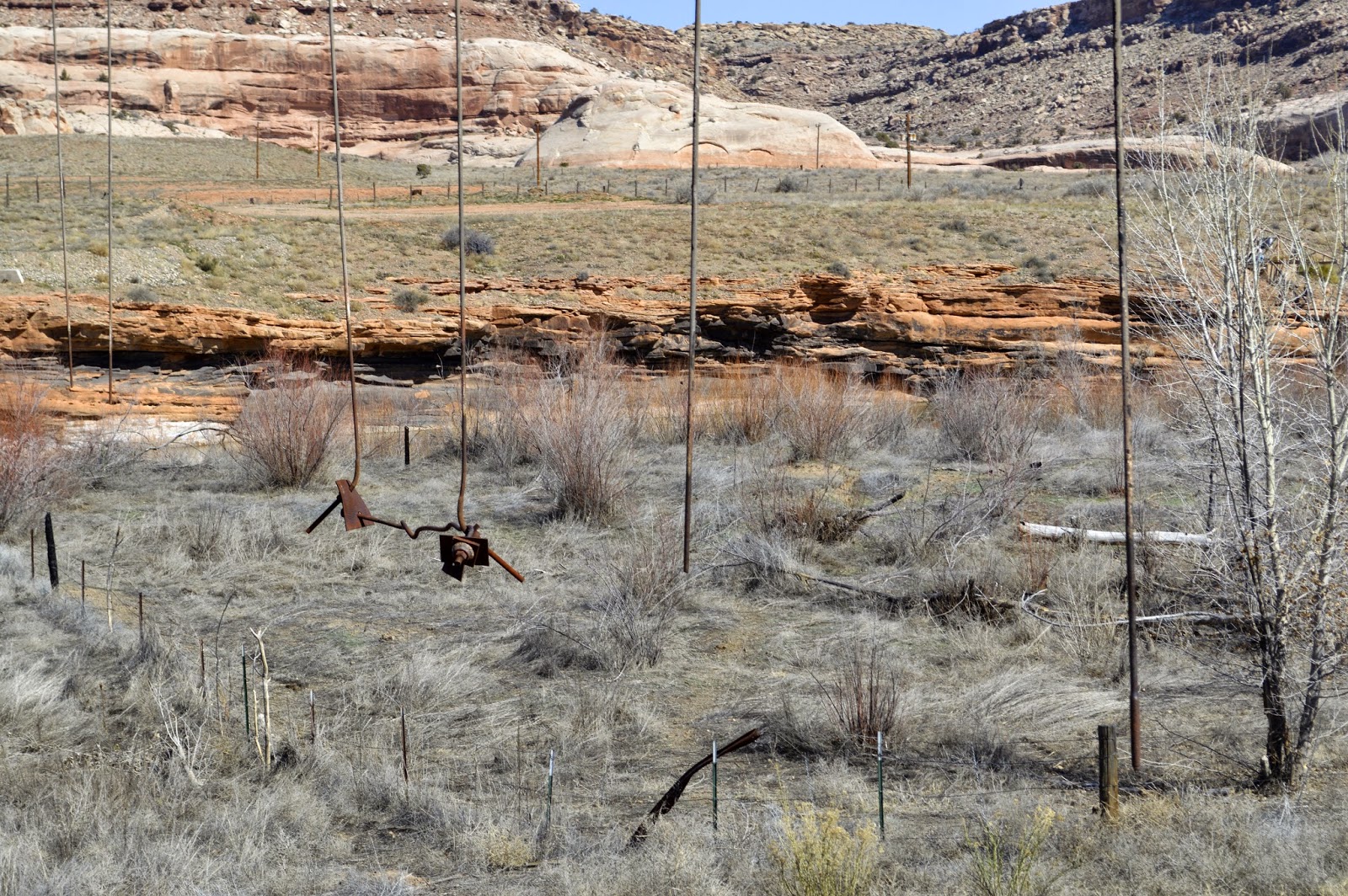 Jim took my photograph near the bridge site. Can you see how happy I am to be out in the warm sunshine? 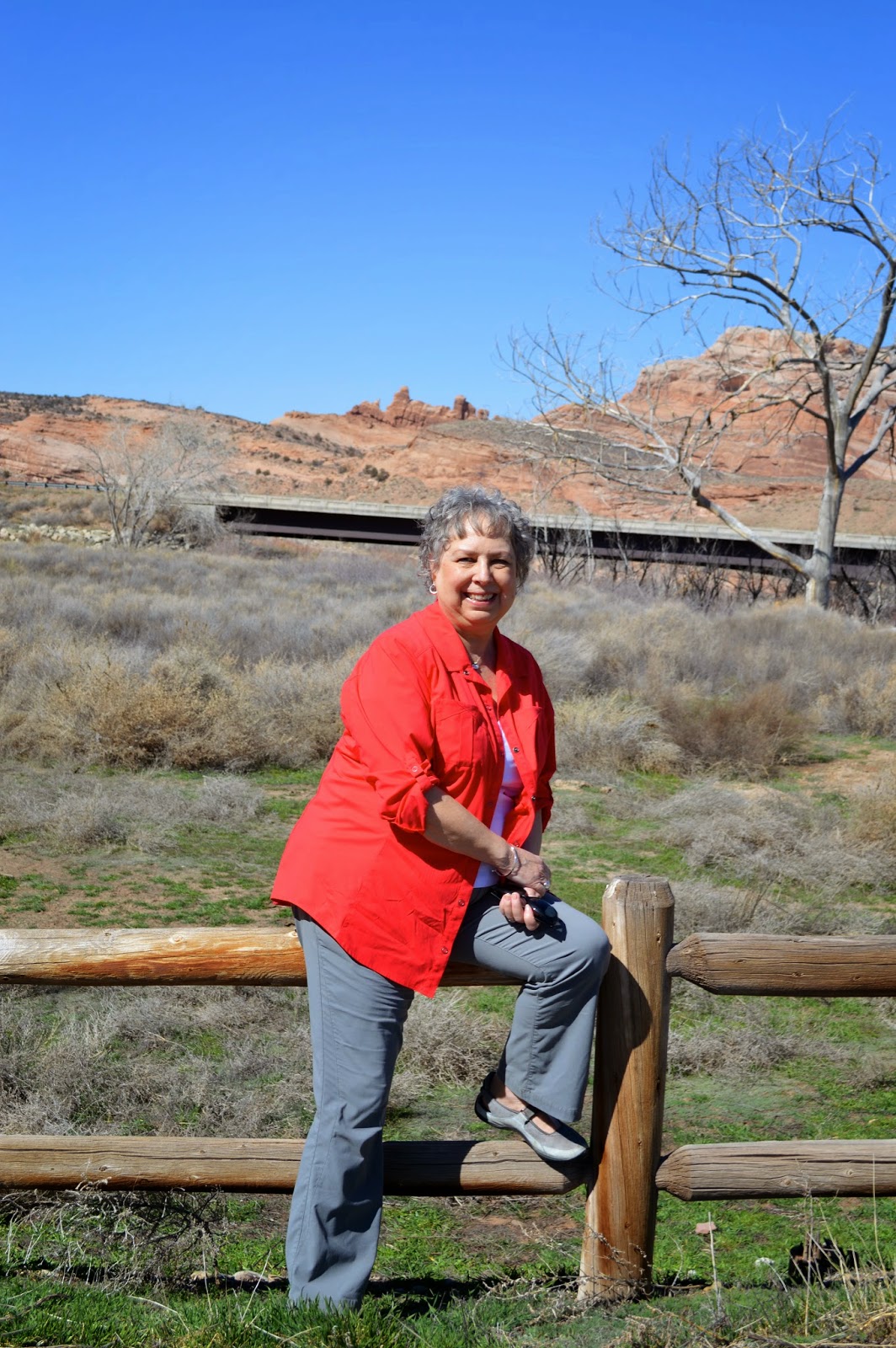 This part of Utah is so beautiful and unique.  If you ever get a chance to travel Route 128, take it.
I didn't take many photos, but here are a few. 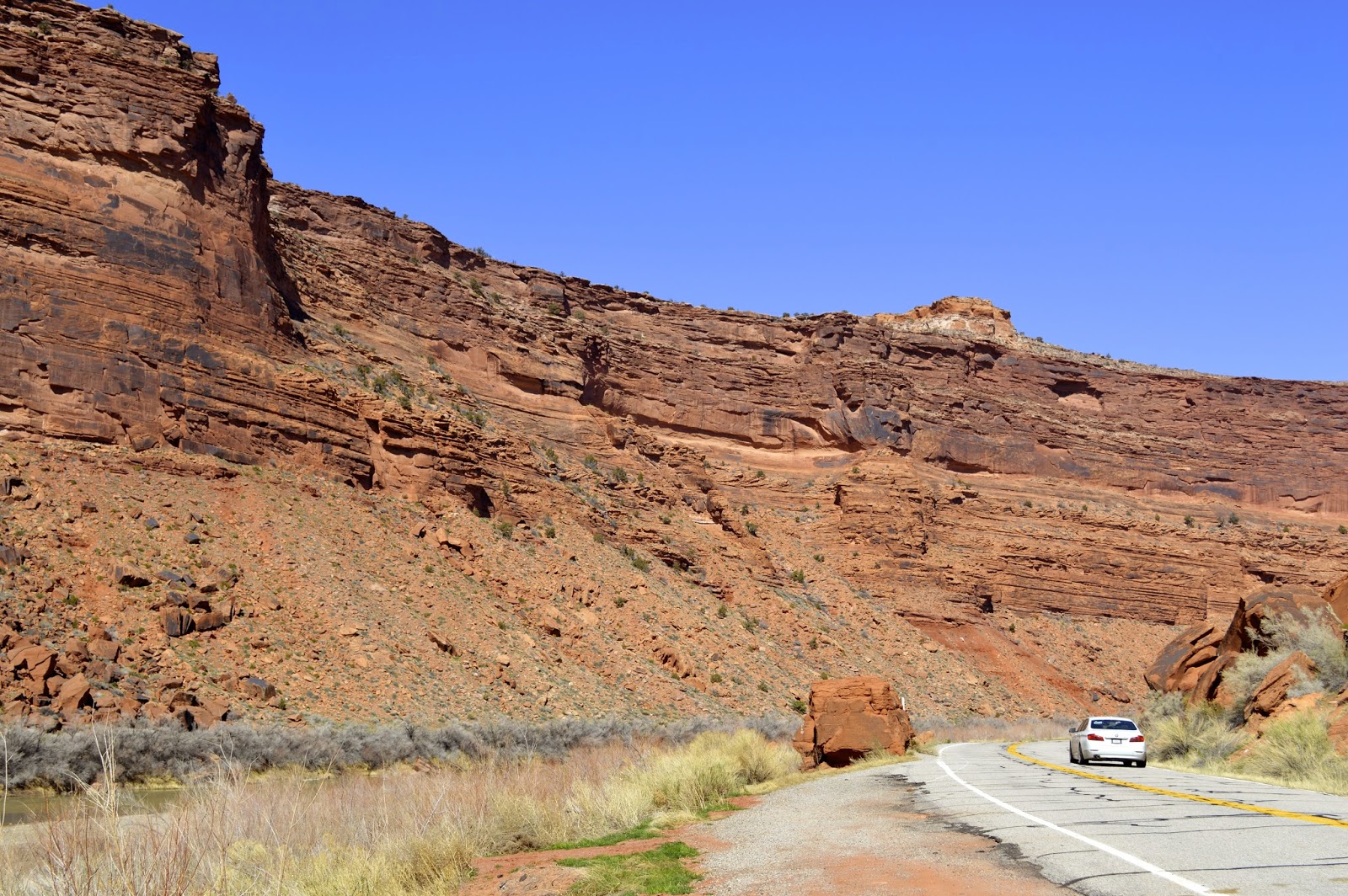 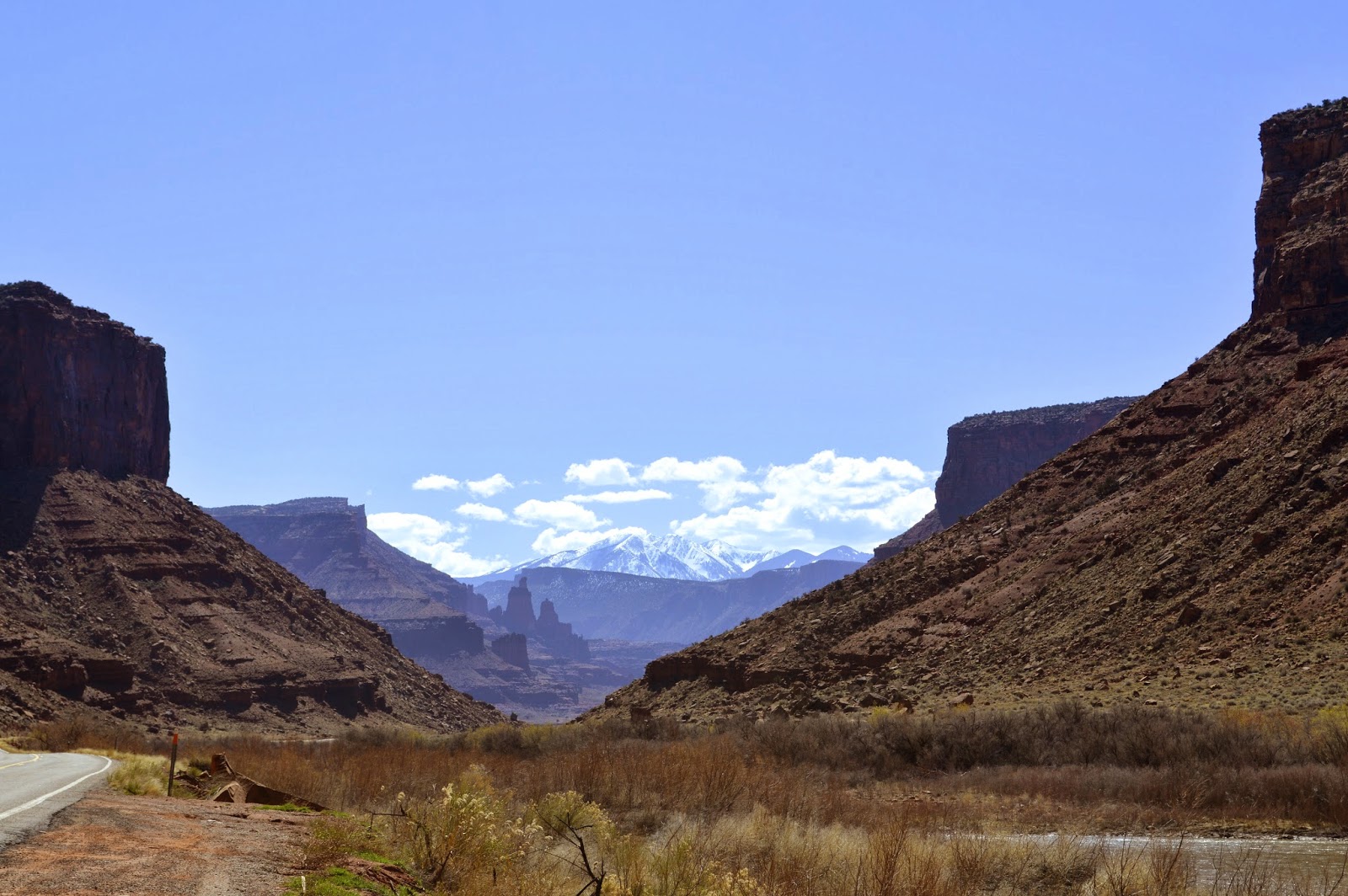 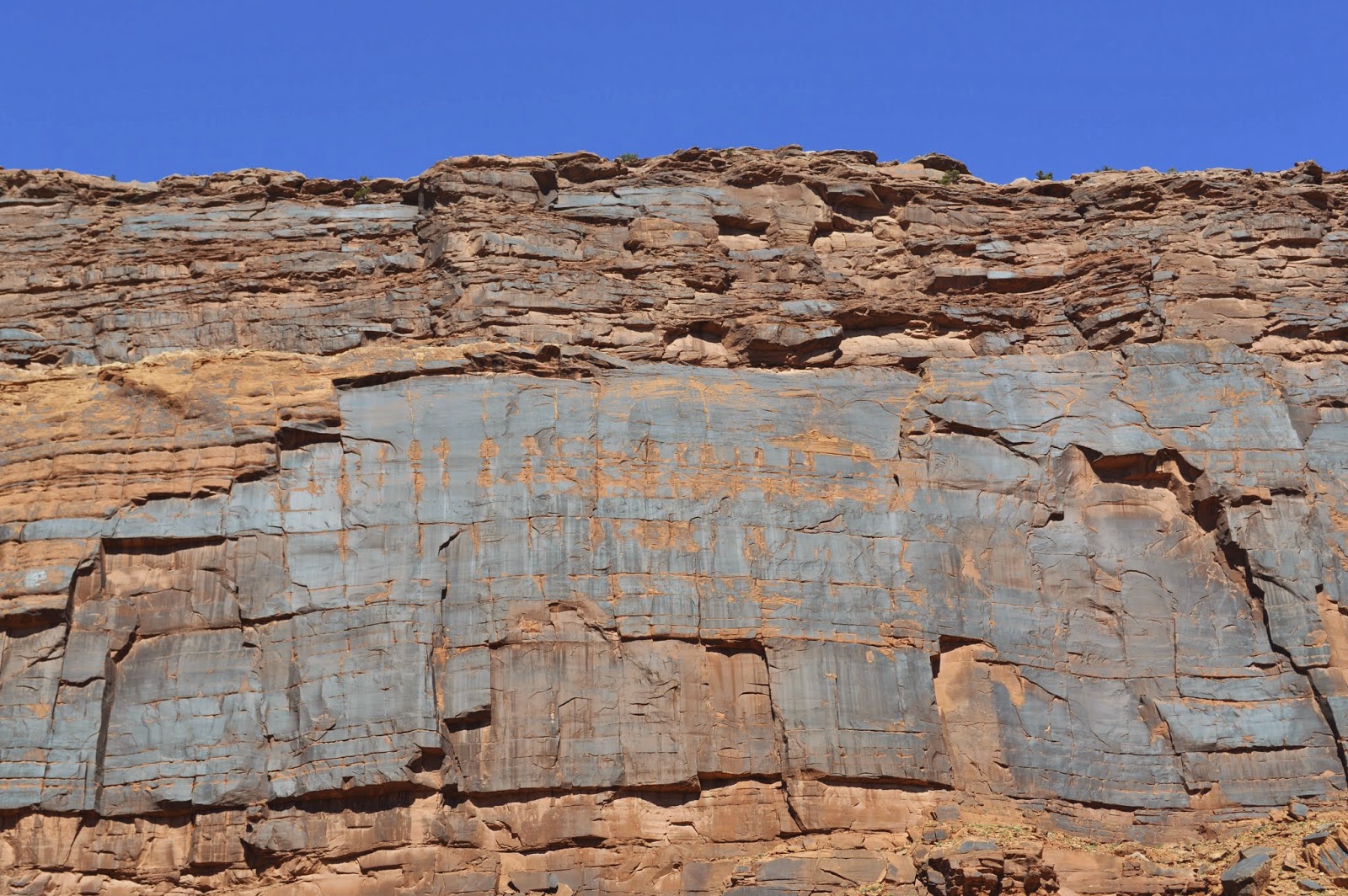 Moab, Utah is a destination place for bikers and hikers.
It is also the setting for the Moab Canyonlands Half Marathon which is held every spring.
As we drove closer and closer to Moab, we began to sense the great excitement that others who had been training all winter must be experiencing.
All along the river, camps where very hearty runners would spend the night before the big race were being set up.
I can't imagine sleeping on the ground in a tent before running a half marathon the next day.
Can you? 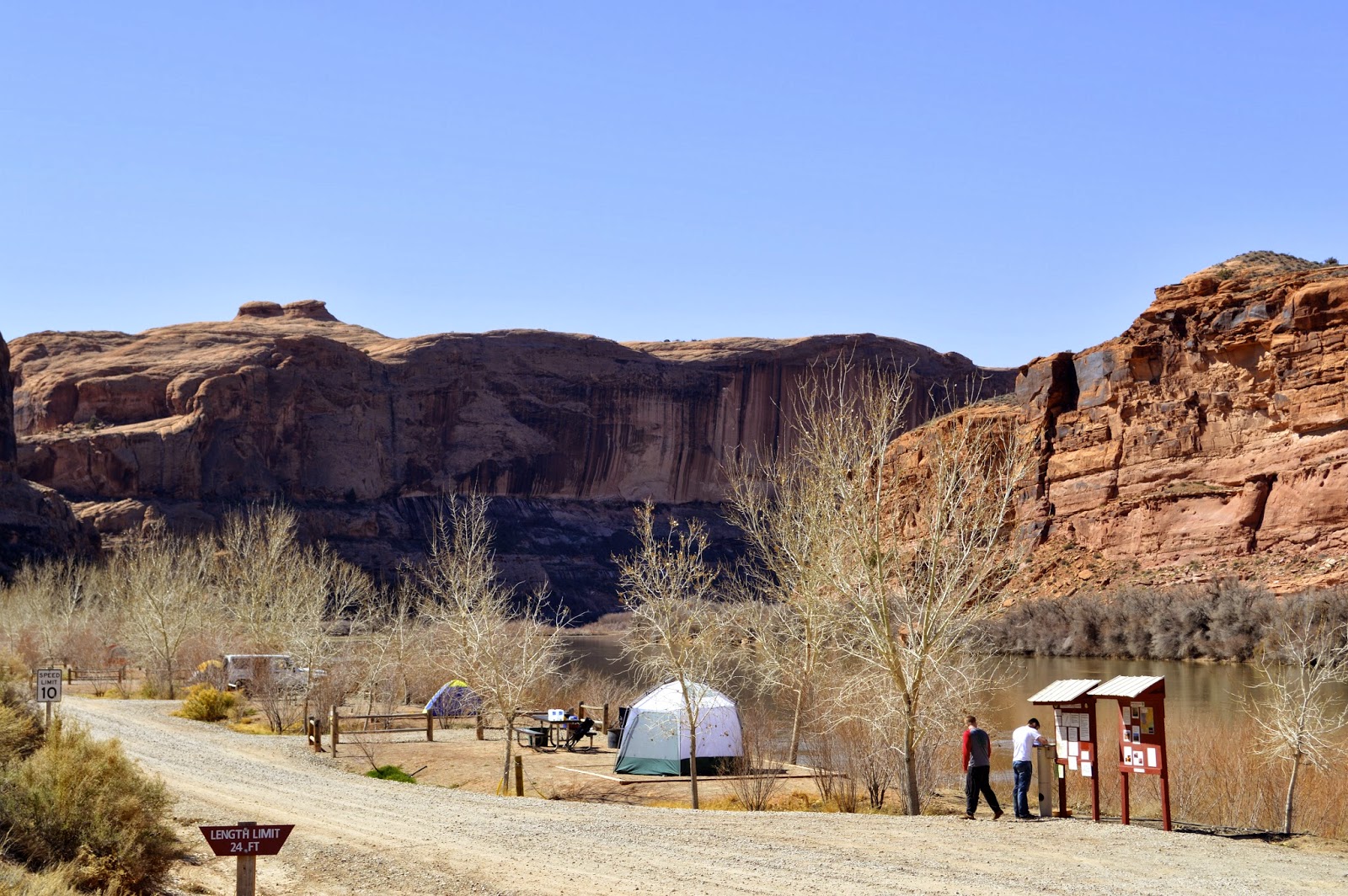 It was quite easy to determine where the race would begin. 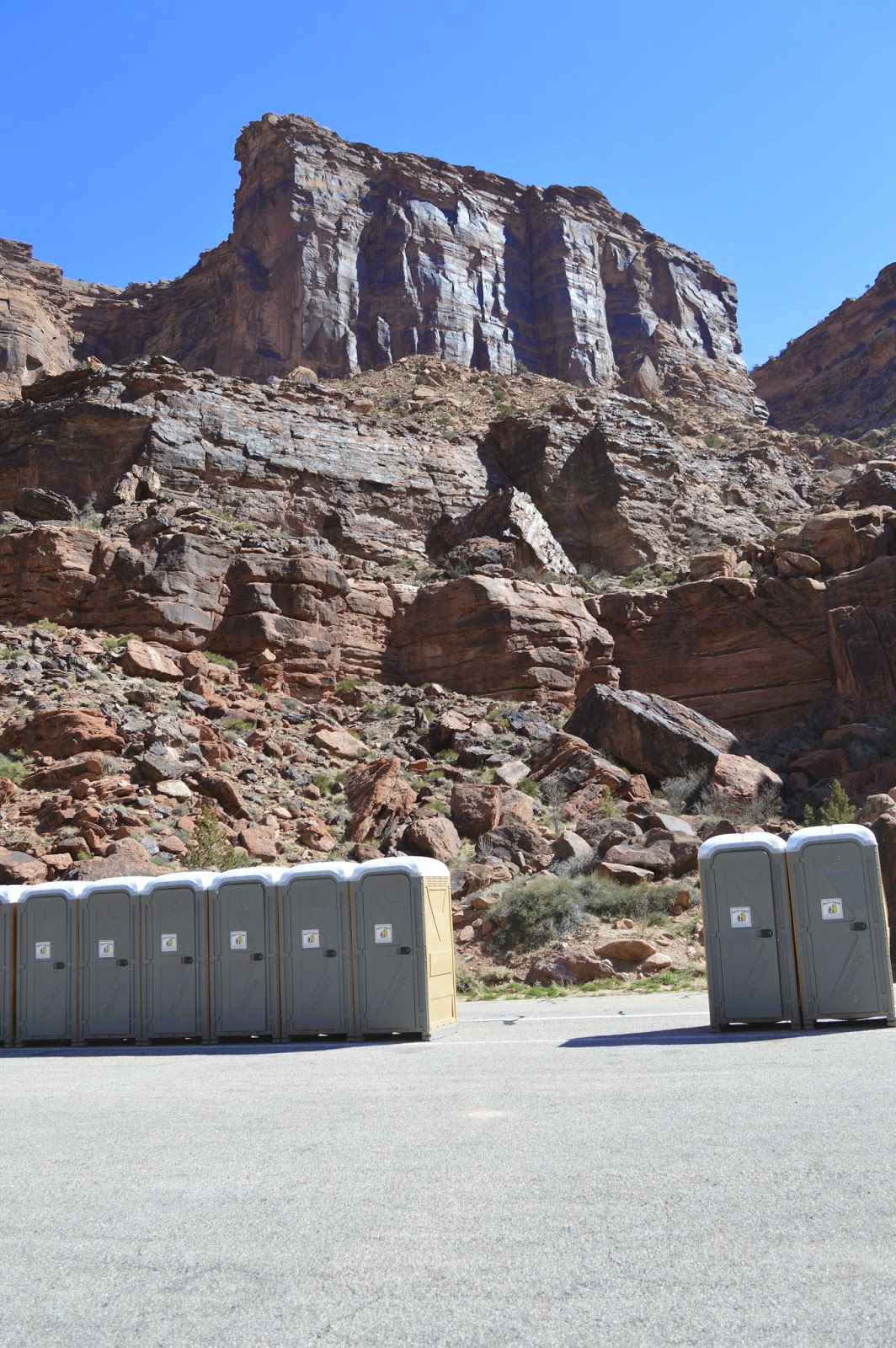 Porta pottys were being set up to serve the hundred of runners who would be transported by bus to this area the next morning from Moab.  From this starting place, the runners would run 13.5 miles on Highway 128 along the Colorado River back to Moab, Utah. 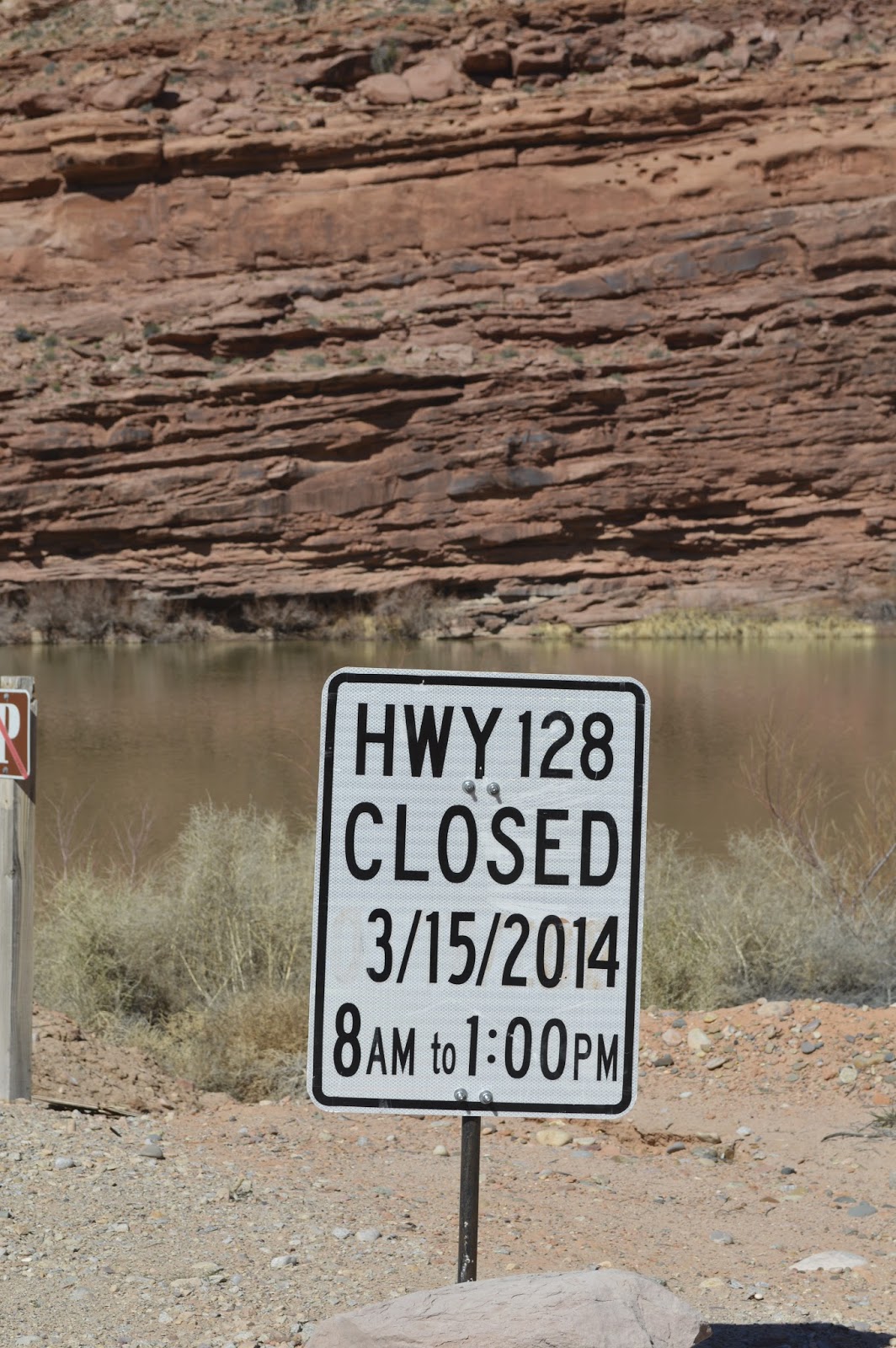 I can only imagine how exhilarating this race must be.

Once we got to Moab, I thought I might try to pick up the race packets for my children even though they weren't going to be able to run the race.
They had paid the registration fee, and I thought they might want the cool shirt that was in the packet.
That way they could wear the shirt and pretend they ran even when they didn't.
Seriously, the shirts were very nice, and one can always use another shirt to run in.
I was able to pick up four packets for each of my four runners that did not make it.
I took the four energy bars that were inside as payment for picking up the packets. 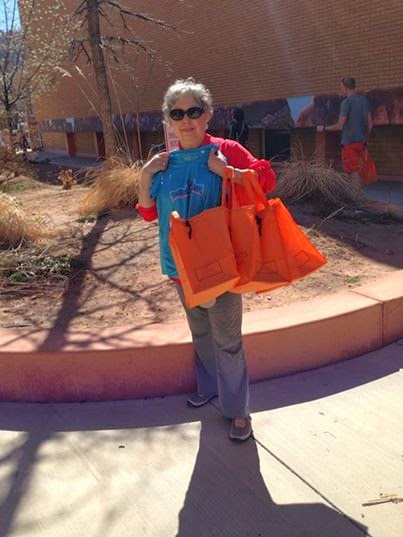 I could not believe how good I felt in Moab.
The altitude of a little over 4,000 feet meant that I could sleep without oxygen.
I could walk and not suffer from tachycardia.
The sunshine helped to lift my mood.
It seemed we had truly left winter behind.

We spent the night a large rented house with the family members that had actually showed up to run.
(My children really did have good reasons why they couldn't run, I just wish they could have made it.)
Jim's two daughters and their families were there with us.
Jim's oldest grandson and his fiancé also stayed with us.
It was great to meet our soon to be newest addition to the family.
Aren't they a cute couple? 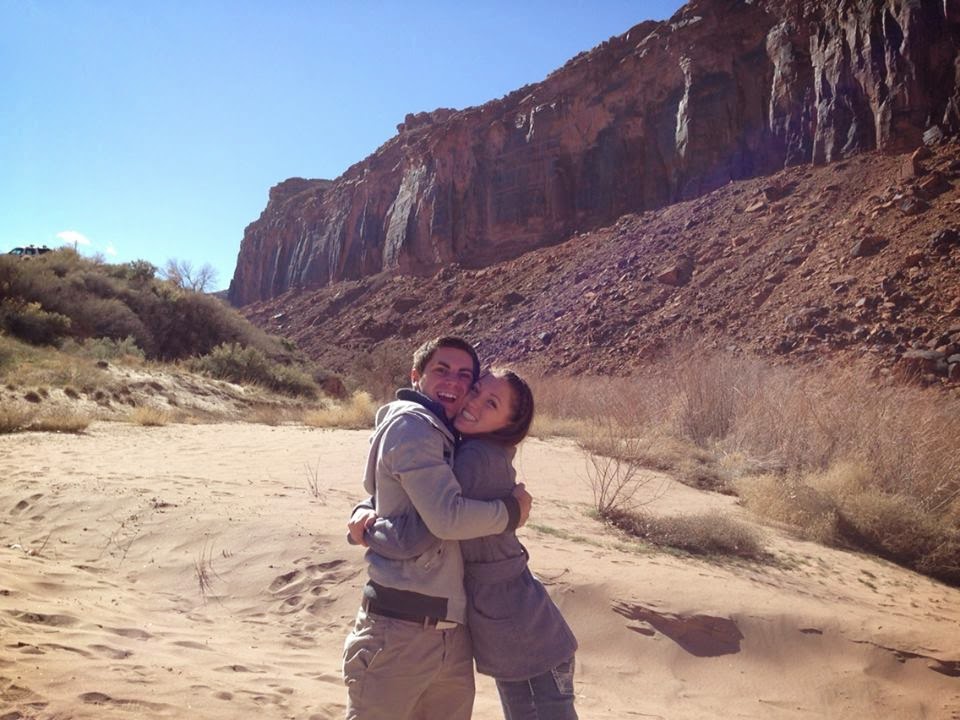 We had eight adults and five children in the house.
Jim's daughters made a wonderful pasta dinner for us that night.
The next day was the big race.
More on that later.