These days, I do not travel alone.  I may go to Utah without Jim to visit my children, but other than that, as I have gotten older and have had a few health challenges, I do not like to travel alone.  Utah is a place where I spent many years living, and I have spent all of these thirty plus years since I left Utah returning at least once during the year for a visit, so I am very familiar with my surroundings there.  It is like returning to my old hometown.

Also, I have friends and family there, so I never feel adrift when I am there alone.  I no longer drive to Utah alone.  I make the one hour flight so easily that I often wonder why I don’t make the trip more often.   Once I am there, I generally rent a car so I have my independence while visiting friends and family.

This year, I made decision I rarely make these days. I decided to fly to Philadelphia alone so that I could attend conference. When we were working, Jim and I went to different destination spots to attend educational conferences. It was always fun to make those trips where we would learn new things, meet new people, and explore new places.  This trip to Philadelphia was different from many of those professional conference trips that we once made.  The conference I planned on attending in Philadelphia, while educational, was a medical conference where I would learn the very latest about living with and treating a medical condition that I have called Frontal Fibrosing Alopcia.

Jim always so supportive of me in dealing with this condition, encouraged me to attend the conference.  I wanted to make a trip out of it for both of us, yet when we discussed the trip, we decided that he really would not enjoy being at the conference with me, and since the conference was being held at a hotel at the airport, it would be difficult and expensive for him to make trips into the city from the conference hotel to explore the historical sites found in the city.  We even discussed extending the trip so that we could explore the area together once the conference was over. We thought we might rent a car and drive to Scranton, Pennsylvania, to visit my son and his family.

Flights, rental cars, and hotels are very expensive in the east during the first of June, so that also was a factor that we considered when we thought about making this trip together.  As it turned out, my son and his wife were going to be packing up and getting ready to move back to Colorado about the same time I would be attending the conference.  In the end, it just made more sense for me to travel alone to Philadelphia.

If you have read my blog before, you may have read my accounts of living with alopecia.  I first wrote about my journey with hair loss in 2016.  You can read that post here:  Hair: A Journey of Loss.  The most recent I wrote can be read here:  Life Lessons Learned from Hair Loss.

I attended my first CARF Conference two years ago in New Orleans.  When I was in New Orleans, I made great friends among the wonderful people whom also have some form of scarring alopecia.  One would never aspire to join the CARF community, yet one is so grateful to have a group that offers so much support when one is hit with scarring alopecia.   It is a shock to be hit with alopecia!  I often welcome new members to the scarring hair loss community by saying, “This is one of those clubs you never wanted to join, but you will find it is one the best clubs you can ever join because it is where you find so much understanding, support, and friendship.”

When I finally left for Philadelphia, I could hardly wait to meet all my friends that I had met in New Orleans two years ago.  Some of these friends, from all over the country, have been there when I have called them on the phone and we have talked for over an hour at a time sharing hope and help when it seemed no one else even knew anything about the disease we share.  We send emails, and we support each other online forums. We have an awesome community!

You won’t see photos of my alopecia friends in my posts because this is a condition many choose not to share with others.  I honor and respect the privacy that others wish to have.
********
I posted the following on a private internet support group page when I first arrived in Philadelphia:

I’m here in Philadelphia attending the CARF Conference. Ben and I have a lot in common. I never thought I’d end up looking like him, but FFA hit me, and now he and I have a real connection. I’m looking forward to learning more about this condition from the shared wisdom of this awesome group of people. 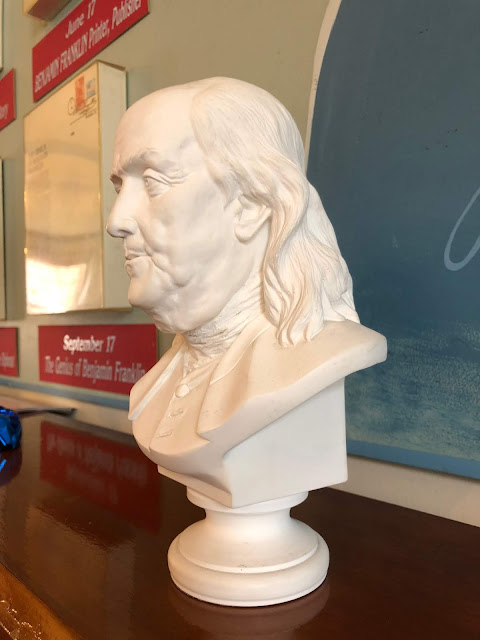 Good old Ben and I really do have a lot in common these days.  We share the same hairline.  Actually, Ben’s hairline is not as far back on his forehead as mine is, and he has more hair in the back than I do.

My forehead is not even a “fivehead” anymore.  It is more like a “sixhead.”  In other words, I need the width of six finger to measure how far my hair has receded.  This is not the look I was going for as I aged!

Once I landed in Philadelphia, I boarded a bus to take me to the hotel and happily realized that my dear, dear friend that I officially met two years ago was on the same bus.  She was the first person I ever spoke to by phone who also had the same form of scarring alopecia that I have.  We “met” over the net because I wrote a blog post about my condition.  Someone else with this condition read my post, called this friend to tell her to read my post.  Once this person read my post, she commented on my blog about what I written.  I read her comment, and then tracked her down, sent her an email, and then we spoke by phone for nearly two hours!  That was two and a half years ago.  I now count her among my dearest friends.
*********

I saw little of Philadelphia itself.  Most of my time was spent at the conference.  I hope to write about the conference itself later.  I did however make three short trips into the city.

The first day I in Philly, one of my friends and I took an Uber into the city, did a little bit of walking, and ate lunch while we caught up with each other about life and about our shared hair condition.  She took a photo of me while we were in town.  That’s me wearing one of my wigs while I am standing in front of Independence Hall. 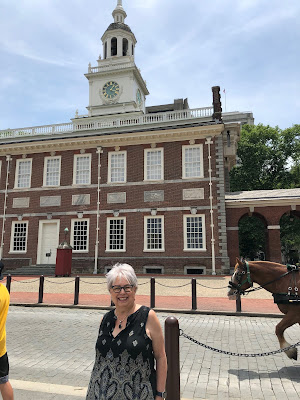 I learned from ConstitutionFacts.com, that those wig-wearing men whom frequented Independence Hall when our country was first founded were wearing wigs made of goat and horse hair.  Those wigs were seldom washed properly, smelled terrible, and tended to attract lice.  (Yuck)  That is why these wigs were called  “powdered wigs.” The wig wearer sprinkled a powder that was made of “finely ground starch and scented with lavender” over their wigs. (Was this the first dry shampoo?)

I can’t even imagine how heavy those wigs must have felt, and it makes my head itch to even think of having goat hair or horse hair next to scalp.  Scratch, scratch, scratch.

Ben Franklin was truly a wise man.  He rocked his bald head.  He did not wear a wig.

My next trip into the city came when on the second night of my conference my son surprised me with a phone call saying that since the flights bringing his wife and baby to Pennsylvania had been disrupted by late flight connections, she was now flying into Philly.  He and his oldest son picked me up after my conference Saturday night dinner, and took me into town for dessert at Max Brenner’s.  What a fun time that was!  I didn’t think I’d get to see these two when I was in PA, but it turned out we had a special adventure of driving around downtown Philly at night while looking for that special place where chocolate addictions are fed by wonderful concoctions heavily flavored by chocolate. 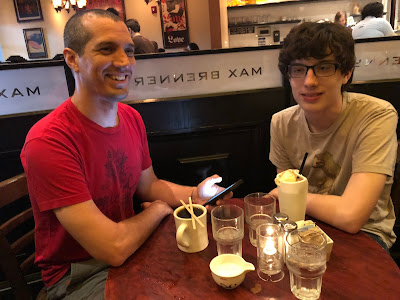 On the last night of the conference, after nearly everyone else had gone home, one of my dear friends with scarring alopecia whom I met in New Orleans and then was able to spend time with again in Philadelphia, asked me to join her and her mother on a trip into the city for dinner.  We took a taxi to Reading Terminal Market.  What a fun place!  We ended up eating dinner at a place called Molly Malloy’s.  The hamburgers there were seriously the best I have eaten in a very long time!

It had been raining when we arrived at Reading Terminal Market, but since the rain had stopped when we finished eating, we decided to do a bit of a walking tour of Philadelphia. 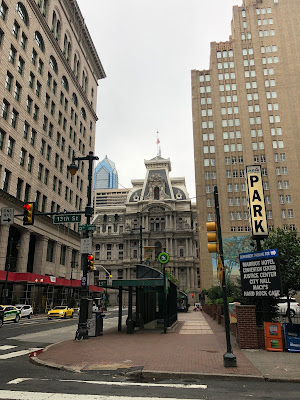 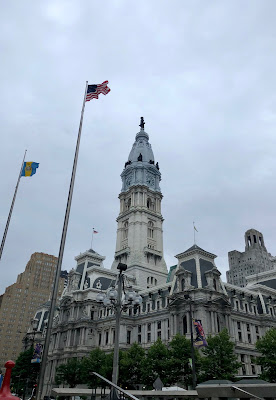 I recognized a few of the landmarks from my trip into town with my son Jonathan, so I suggested we go to Max Brenner’s for dessert.  I thought that Google Maps would help us find the way.  I think I also must have been thinking that the guy on the horse was pointing in the direction we should go. 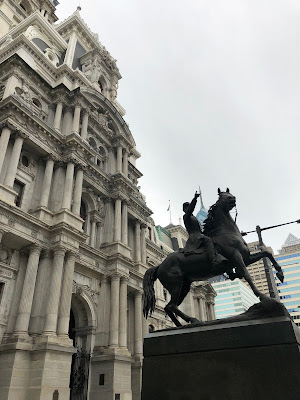 My friend took a walk through the water fountain... 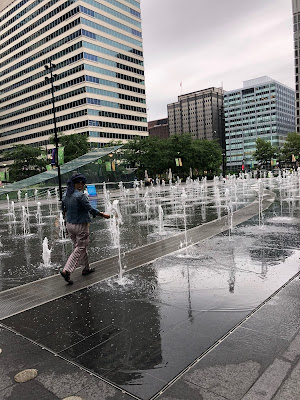 We then got out to the street where we were supposed to go, but I learned that I am very challenged about direction in big cities.  Actually, I already knew that.  Also, I learned that when following Google Maps, one should make sure that the “walking” instructions are on instead of the “driving” instructions.  Oppps.  There are a lot of one way streets in Philadelphia, so the driving instructions kept telling us to turn when we should not have turned while walking.

We turned around and soon we arrived at Max Brenner’s where for the second time, I enjoyed a wonderful chocolate dessert.

On my last day in Philadelphia, I only had time for breakfast at the hotel before I had to leave for the airport.  I was sure everyone from the conference had left when I went downstairs, but I was wrong.  As I headed to the restaurant, I heard the familiar voices of a few of my friends.  We all were so happy to have one last time to share a meal, some conversation, some words of support.  Departing hugs were given, and we all promised to meet again in two years for our next conference.

My trip to Philadelphia was memorable for so many reasons.  I reunited with so many friends, and I made new ones.  As I have said before, some of the most intelligent, successful, and beautiful women I have ever met are the women I have met whom also suffer from scarring alopecia.  There are also some men in this group whom have given so much to make sure we have the support and information we need to deal with this disease.  I can’t imagine having this disease without the support of all of the wonderful people associated with CARF.  I’m so grateful I had the opportunity to attend this conference and spend some time in Philadelphia.

More on the conference itself later...

Posted by Sally Wessely at 11:45 AM No comments: