My Man is Back

My title for this post may need some explaining.  My regular readers may be wondering where my man has been.  In fact, they may wonder where I have been since it has been over two weeks since I last posted.  So, let me fill you in on what has been happening around here.

Jim, my man, sometimes known as my main squeeze, did not actually go anywhere.  He just has not been himself for quite some time.  As some of you might recall, in December of 2011, my husband dodged a major heart attack when it was discovered that he had a 95% blockage of his LAD.  You can read about that health scare here: Nails Dodges the Big One.

After this major life event, my husband was able to bounce back with renewed energy.  He lost weight, ate a more healthy diet, exercised three or more times a week on the elliptical machine, and walked a couple of miles a day.  Just one month after this crisis with my husband's heart, I fell down our basement stairs and suffered a head injury.  This meant he became the caretaker for me.  He took care of all the household tasks and drove me everywhere I needed to go.  More than that, he supported me through a very rough time in my life as I tried to overcome a traumatic head injury, a vestibular disorder, and debilitating anxiety.  At the same time, we had a very challenging new puppy that did not respond well to training.  Nails, another nickname for my dear husband, proved how tough and determined a man he was once again during this difficult time in our lives.  At a time when he should have been recuperating, he took care of me, and trained a difficult pup while recovering from having a stent placed in his heart just a few months before.

Early this summer, just as I was finally getting better, Jim began to experience some health symptoms that were perplexing.  He was extremely tired, his energy level was very low.  He no longer had the energy to work out or walk.   He seemed to be nauseated on a constant basis.  He experienced body aches, and he became nearly unable to walk because of pain in his hip.  Not only that, but he also began to suffer from depression.  I would ask him to describe what he was feeling, and he would say, "I just feel like I have a general malaise."  At first, I feared that his heart was bothering him again, but he did not have any heart related symptoms.  Every afternoon, he and I would each go to our individual studies, sit in our easy chairs, and take long afternoon naps.  His exercise routine stopped.  He suffered a lot of pain in his hip which did not allow him to walk far.

In September, after a summer of seeing my husband's health steadily decline, we decided he needed to be checked out by his cardiologist just to see if we could get some answers to solve the mystery as to why he was suffering from this strange malaise.   It was an observant LPN at the cardiologist office that discovered that the calcium levels in his blood were very high.  We were referred back to  our internist.  She seemed to have an idea about what could be going on with him and sent him to the hospital for additional testing that included scans of his neck.  After all the testing was done, we were told that he had hyperparathyroidism.  My husband was then referred to an ear, nose, and throat specialist.  Thankfully, we knew a great ENT, one we trusted and liked.  He reassured us that surgery would most likely solve his problems.

There is a mnemonic that our endocrinologist gave us to describe the hypercalcaemia that comes about because of hyperparathyroidism.  It goes like this:   Stones, bones, groans, thrones, and psychiatric overtones.  When one has hyperparathyroidism, there is a high level of calcium in the blood that causes these symptoms:
*Wikipedia

Needless to say, none of these symptoms are fun.  That is why we wanted to hurry up and have surgery to remove the offending parathyroid.  There was just one problem, Jim was on Plavix.  He had to be cleared by his cardiologist and taken off of Plavix before he could have surgery.  So, back to the cardiologist we went.  He said that he could not clear him because he was sticking with protocol and keeping him on the blood thinner at least until the one year date after the stent was placed in his heart.  One cannot argue with the wisdom of this decision even though it seemed that the hyperparathyroidism was filling my husband's daily life with other health challenges that made it so difficult for him.

Early in the morning of the Monday after Thanksgiving, I noticed my husband seemed to have a drooping mouth when I looked at him for the first time that day.  Stunned by this, I had him go through the FAST test.  He could smile, he could raise his arms, his speech was normal, but I decided that I was not convinced that he was not having an incident.  I had him take his blood pressure. It was incredibly high.  Wasting no time, I insisted he let me drive him to the hospital.

At the hospital, after getting an EKG, and after not performing too well on an initial neurological exam, he was admitted to the hospital where he spent two days being evaluated for stroke or TIA.  A stroke was ruled out, but it was determined, as it usually is with TIA, that the results were inconclusive as to whether or not he suffered a TIA.  He was told he was extremely at risk for stroke, and he was watched very carefully for those two days in the hospital.  Needless to say, that was a very scary time.

On December 6, 2012, exactly one year after the heart incident, Jim was able to go off Plavix.  We contemplated having his surgery done on December 20th.  He even scheduled it for that date.  Then, we decided we did not need to have the additional stress that surgery brings just days before Christmas. I'm glad we made this decision, even though Jim continued to not feel well and suffered from high blood pressure and other symptoms.

Finally, last Thursday, January 17, Jim had surgery to remove at least one of the parathyroids that had tumors.  It was unclear whether or not he had tumors on more than one because the scan clearly showed one and hinted at another.  He came through surgery with flying colors.

The next day, it seemed like I had my man back.  He was downstairs at his desk working and talking with friends on the phone with his old personality and sense of humor back in place.  He wanted to get out and go.  We went shopping.  He had a new bounce in his step.

The next day, he was tired from surgery, and he most likely overdid a bit the day before.  Everyday has shown improvement.  Today, he went in and had an epidural/steroid shot in his hip to alleviate the pain in his hip from spinal stenosis.  That procedure also went extremely well.


Despite this bout with bad health and pain, that is hopefully behind him, I have continued to be amazed by this dear man I had the good fortune to marry.  Each day, he has spent time with his beloved dog Boston. Each day, he cares for this dog by feeding him, walking him, continuing to train him, and spending quality time with him just sitting on the back deck admiring the mountain range behind us.   Boston is his good buddy and loyal companion. 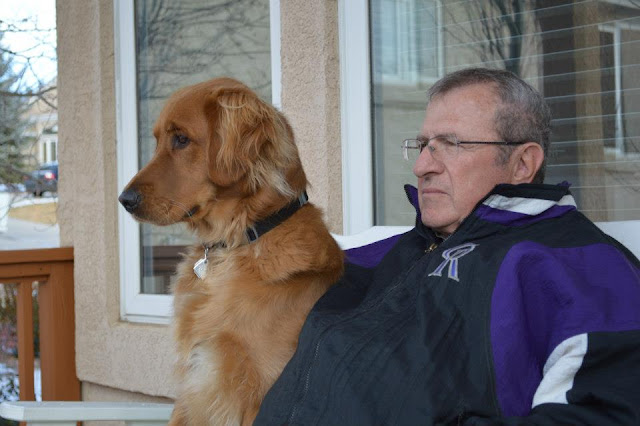 Each evening, you will find my dearly beloved sitting in front of the fireplace reading.  He loves  reading those thrillers.  He never fails to remark how much he love our new home and how happy he is that we made this move. 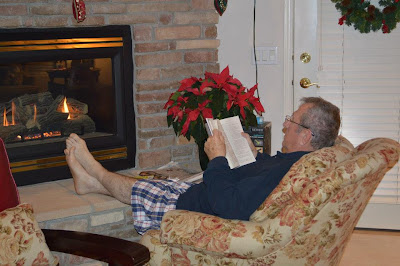