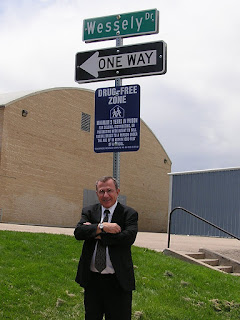 Late last week, after my massage, my husband picked me up and took me with him on a ride across town to pick up something from the school where he had served as principal.  School was just letting out for the day as we drove down Wessely Drive and parked the car in front of the school in the visitor spot located just to the left of the spot designated "Principal Only."  I looked up at the sign, then over at my husband and asked, "Do you miss it?"

My mind went back to the day, one of the last of his 40+ years in education, when the senior class surprised him by successfully naming the street directly in front of the high school where he had served as beloved principal for 11 years named after him.  He was overwhelmed by the honor.

Now, as then, he was ready for retirement.  He had served well and had earned a sterling reputation for being a much loved, respected, and admired educator.  No one thought he could ever really give it up.  He worked too hard and loved it too much.

His adamant answer, "Not at all."   As we walked in the school, headed to the office to the athletic director, by habit, I started toward the principal's office in the opposite direction.  "This way, dear," he said.  Ah, yes, we aren't going where our lives had centered for so long.   I was headed to his old office without even thinking.

On his last day in a place where he spent most of his waking hours, I took a few photos to record the event.   He was excited and ready to move on to a new venture in his life.  He'd been in school since he was four years old, and now at age 63, he was ready to close the door. 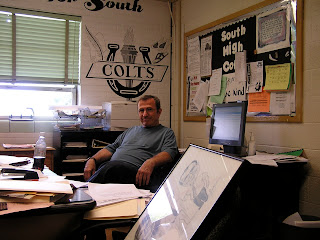 That didn't mean that it wasn't sad to leave so much of his life behind, it was.  I was actually taking a photo of the bullet hole in the blinds in this photo below.  Yes, someone had shot a gun into his office.  Thankfully, it was after hours and no one was there.  His ever present mottos  of "Do Right, Be Kind" and "Something Extra for South" are seen in the photos.  In taking the photo, I caught him in a reflective moment. 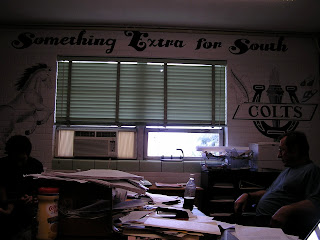 Last week, after our visit to the school, where everyone still comes up to him to get one of his famous handshakes, we went to the basketball game.  We may be retired, but we still are almost always found at the sporting events.  We value the connections, the friendships, the traditions that we made at South High School.  Without those connections and others, retirement would be very lonely.

Many of the dreams of retirement have been fulfilled.  He reads constantly.  This is a treat that he never had time for when he was working.  He works in the yard with me.  He does all the heavy lifting, digging and moving.  We used to walk the dog everyday together.  We've traveled.  We've tried to spend more time with family.  He treasures his weekly lunches, breakfasts and dinners with colleagues.  He bought a new camera which he is learning.  He has a key board that he intends to get back to so he can learn to play the piano.   He spends a lot of time researching his interests on the computer.  He is a crazy man on the elliptical at the "Y."  He is faithful at working out and walking.  These are the dreams of retirement that have been fulfilled.

The realities have been that after the two knee replacements that he had while he was working, he had to have his hip replaced during the summer of 2009.  The other reality is that he is my mainstay as I work through grief.  We did not expect to have this experience in our retirement years.

We'd only been home from our month long trip to Europe for two weeks when Julie died.  Since that time, I don't know what I would have done without him.  His kindness, his support, his empathy, his constant presence, his ability to take over all of the paperwork associated with a death, his humor, his desire to meet my every whim and desire, and his words of wisdom are typical of this man that I married.

Last week, at the basketball game, his one simple act showed me again how he is ever present and ever ready to meet my needs before I even ask.  He had gone off into the crowd to shake hands and spend time with his "boys."  He mentored every high school principal in this town.  All four of them worked with him as assistant principal at one time or another.  We were playing the school of the across the town rival.  Their principal had been Jim's AP before retirement, and he had gone to the other side of gym to visit with him.  About 20 minutes after he left my side, I took out my phone to give my dear husband a call to see if he would bring me a bottle of water on his way back to our seat.  Just then, before I could even dial his number,  I saw my husband walking up the steps toward me with a bottle of water in his hand.  Yes, it was for me.  He knew I would want one.  Before I even asked, there he was again with just what I needed.

Retirement is not always like we planned, but I  am blessed with a mate that is with me in retirement, in life, and in grief.  My girlfriends used to say I am spoiled by him.  Yes, I guess I am.  I like to think I am just very blessed.  Even if our dreams are not all of what we expected, we are together, and that is what matters most.