Unfortunately, This Is Not A Costume.

Today is Halloween.  I've never been one who really enjoyed Halloween.  It was fun when the kids were little to see their excitement over getting dressed up and going trick or treating, but even then, it was not my favorite holiday.

This year, I actually had to think about putting together a costume for Halloween.   My main squeeze and I were invited to a costume party that was held last weekend.  We dreaded getting dressed up because it just isn't our thing.  I guess we are just duds in that department.  We could think of absolutely nothing to wear, so, reluctantly, we went to the Halloween Store.  This seasonal store has been a fixture near our mall for several years.  We had never even thought of going there before, but when we were desperate for inspiration, we decided to go see what the place had to offer.

The place is a Halloween fantasy shop for sure.  We could not believe all the costumes, wigs, shoes, accessories, jewelry, and assorted props that were on the shelves.  These costumes are not cheap either.  The average price was at least $40!

Little did we know how much fun we would have looking at all the various Halloween outfits.  I guess we are still kids at heart as we found ourselves joking about the types of outfits and combinations we could come up with.

In the end, I was too cheap to buy anything but a couple of wigs and a pair of glasses.  I didn't have time to sew anything because, as usual, I had waited until the last minute to come up with an idea.  I bought a Marilyn Monroe wig for me and an old bald guy wig and pair of glasses for my hubby.  I was just sure I could come home and fit into my red sexy dress that would make me look like Marilyn.  "It was big on me the last time I wore it," I said to hubby.  (I wore it last in about 1988!)

Unfortunately, my bubble was burst when I got home.  I checked the size first: a size 8.  Thinking it would fit because it really did used to be too big, and still in denial, I tried it on.  It could not be zipped up because there seemed to be at least a four inch gap that the zipper could not accommodate!  I guess I've gained a few pounds since I wore it last.  In the end, I wore my grandmother's old mink stole and wig.  Jim looks a bit like Einstein. 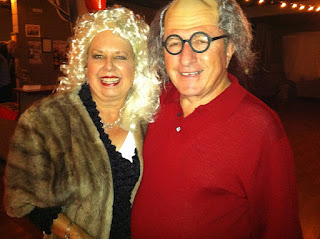 Today, I am not in costume.  I wish I were when I look in the mirror!  I look how I feel: frumpy, old, and tired.

In the past four months, I have lost nearly all of my left eyebrow.  My right eyebrow still has a few hairs left.  My eyebrows suddenly disappeared in June.  As I told my daughter, "I've lost my eyebrows, and I really always kind of liked the ones I had."  Once, very thick, I constantly had to wax or pluck them to keep them in shape.  Now, they are gone.  (Are they gone for good?)

My hairline has receded so much that I think I look like my father more and more everyday.  I can't even get my newly cut bangs to cover up the loss.

I'm tired.   I barely can drag myself around.

Oh and then, there are the heart palpitations and racing heart that I am again dealing with.  These are accompanied with anxiety and near panic attacks.

Does this not scream that I must again be suffering from hypothyroidism?  A year ago, I was finally diagnosed with Hashimoto Disease after being on synthroid for hypothyroidism for years.  A new regime of taking my medication worked for about nine months.  I knew it was no longer working, but sometimes, it takes the doctor a bit longer to decide to change my medication because the blood work says I am the "normal range."  I happen to know where I need to keep the levels to feel right, but that doesn't seem to count for much.

The doctor's office called this morning after I dragged myself into her office last Thursday and said that she had to find out what was wrong with me.  She ordered all kinds of blood work.   Sure enough, I am "out of range" on my TSH.   I need to change my dosage of synthroid.  I also need to go back on iron.  No surprise here!  Hopefully, I will start feeling better.

In the meantime, in order to not scare the little trick or treaters at the door tonight, I will put on my make-up, starting with penciled in eyebrows, and hope they don't think I'm dressed as a frumpy, worn-out, old woman.

Happy Halloween!  Are any of you dressing up this year?  Do you have plans for any parties?
Posted by Sally Wessely at 11:58 AM 26 comments: