I Am An American

I am the daughter of
America.

The Isle of Jersey
was home
to my first American ancestors.

In 1676,
a young man,
Philippe Gavit, (also spelled Gavet, Gavett, Gavitt, and Gavvitte)
a Frenchman,
left that island in the English Channel off the French coast of Normandy,
and headed for America.

He stepped ashore in Marblehead, Massachusetts.

Soon, he married and established the beginning of what would become my American family.

I am the daughter of early American entrepreneurs and land owners.

Their son, William French, Jr., my father's namesake,
fought in the Revolutionary War.

A great grandfather on my maternal side fought in the Civil War.

My father and all of my uncles served proudly during World War II.

I lost a first cousin, Steven Reichert in Viet Nam.

I am the daughter of Americans who went to war for this country.

My grandfather when asked what nationality we were always said,
"We are damn Yankee rebels."

I am the daughter of Welsh coal miners.
From the green hills of Wales they came to the dry hills of Colorado
to work in the mines.

I am the daughter of coal miners,
union members.
railroaders.

I am the daughter of proud Democrats who always voted the Democratic ticket.

I am the daughter of Scotch Presbyterians.

I am the daughter of those who worked for the WPA.

I am a daughter of those who came west to breathe the high mountain air because
asthma
had made life in the humid east unbearable.

I am the daughter of storytellers.

I am the daughter of those who searched for gold in the west.

I am the daughter of
shop keepers,
a telegrapher sending and receiving messages across the wires,
housepainters,
milliners,
seamstresses,
homemakers


I am the proud granddaughter of a homesteader.
My grandmother, as a single woman, established
and lived in a homestead on her own.
It is my great sadness that I never knew this woman.

I am the daughter of strong Christian believers,
and renegades who never believed.

I am proud of my heritage.
I believe in extending the American dream to others.

I am a teacher of immigrant children.
Their stories could break a teacher's heart.
They left family, culture, language, and friends,
sometimes unwillingly,
to have an opportunity for a better life.

These children have taught me more about the American dream
than I ever learned in any class in American history I ever took.

I married a man whose parents were refugees from Nazi Germany.
I am grateful this country provides a place of refuge to those escaping
The Holocaust,
genocide,
persecution,
poverty,
and the horrors of war.

I am grateful this country remains the land of opportunity for many.
I am also aware of how much poverty and inequality we have in our own country.

I am well aware of the need for immigration reform.
Few things anger me more than calling a person "illegal."
People are NOT illegal.
Some are in the country without documentation.

This problem of immigration is a complex, generational problem.
I know many families who might not have had documentation to be in the United States.
I know this because students have trusted me enough to tell me this.
As a teacher, it is my legal responsibility to provide an equal educational opportunity to every student
K -12 regardless of immigrations status.
(Plyler vs. Doe 1982)

I am an American teacher who worked with marginalized populations.
I am proud to have worked with this strong,
determined,
hard-working,
courageous,
group of students and their parents.

I am an American.
May I never forget my roots in this democracy.

Sometimes, I see us fighting over the use of words in our Pledge of Allegiance and it breaks my heart.
We have our freedoms,
thankfully we have,
and I support,
our freedoms,
but at times it seems that we are forgetting that we are to be indivisible.
It seems our  First Amendment Rights
are used in ways that appear to shout that we no longer believe in
liberty and justice for all.

We live in troubled times,
America,
but I,
an American,
continue to believe in the dream my ancestors,
those damn Yankee rebels,
fought to establish.

There are fifteen lines in that famous poem, The New Colossus, written by Emma Lazarus
that became associated with the Statue of Liberty.

I am an American.

I am pondering every line of that poem written about the "Mother of Exiles."

I hope you will do the same on this Independence Day.

Read more about the poem and its author here:  How a Sonnet Made a Statue the "Mother of Exiles." 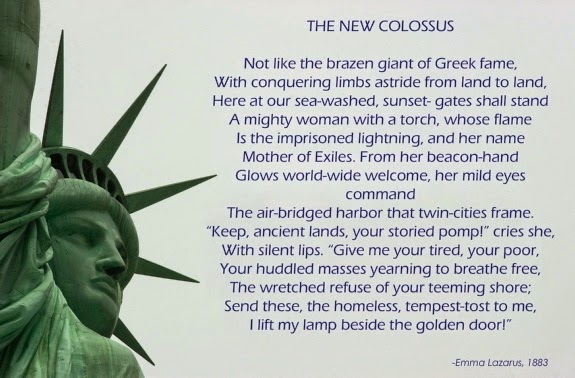