All the really cool kids are at the game in New Jersey.  We will be spending the day here at home watching the game.  The sky is a blue, blue, blue.  It is amazingly beautiful outside to see snow topped trees and houses glimmering with diamond dust snow that sparkles all the more in the brilliant sunshine.  The contrast of white snow against the blue sky nearly takes my breath away.  Of course, in Bronco country, we are all hoping that the sky will be a blazing orange tonight.  As some would say, "Who says God isn't a Bronco fan?"  The photo below is one making its rounds on FaceBook today.  I love seeing the majesty of America's mountain, my very own Pikes Peak, surrounded by such a beautiful sunset. 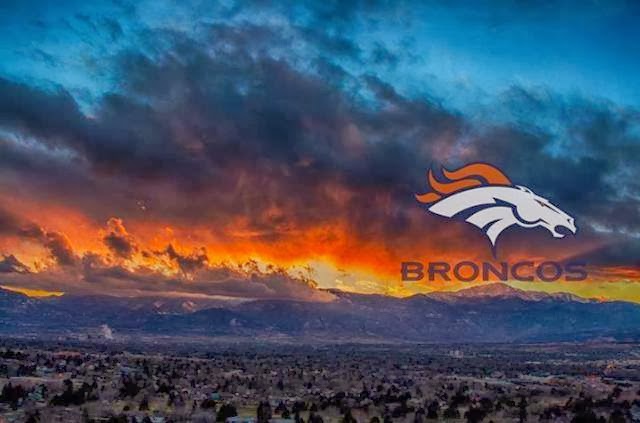 A few loved ones are the lucky ones who were actually able to go to the game in person.  My very own son-in-law, married to my husband's daughter, is living the dream of every young man's life this week:  He is with the team, yes the team itself, rubbing shoulders with Manning and Elway and all the rest, as they have been preparing for the big game.  Here he is with Coach John Fox and Pat Bowlen, majority owner and CEO of the Broncos. 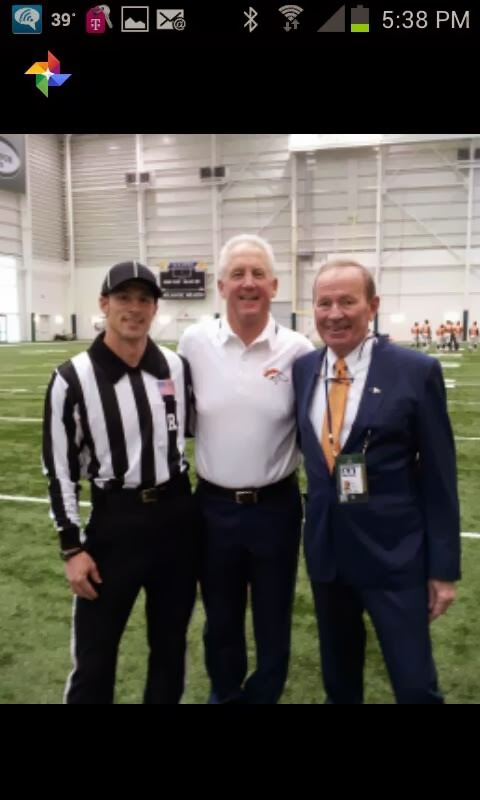 While attending the Super Bowl is a brand new experience for Nathan, rubbing shoulders with the players is not.  He has the dream second job of working as a referee for Bronco weekday practices.  He not only rubs shoulders with Broncos players, he throws the ball to Manning himself, and he makes the calls during practice.  Last year, well we shouldn't speak of last year, he thought he'd make the trip with team.  This year he did make the trip that will hold a lifetime of memories for him.  He will be sitting in the stands cheering the team on.  I can't even imagine how excited he must be.  I am so happy for you Nathan.  He deserves this great opportunity.

Nathan flew out last Sunday on this all expense paid trip east wearing his very best suit which was the required dress code for the trip.  He was feted with the best array of food that anyone could think of on the flight itself.  You have to keep those men fed.  While in New York, athan takes his breakfast and lunch with the team.  Each week, he actually eats dinner prepared by the team chefs after every practice.

Others are there too.  My former son-in-law is there with his entire family of father, step-mother, and all of his siblings.  Julie's boyfriend Jason is there.  Like I said, all the really cool kids are there.

I'm here writing an blog post before I go in to fix us some sloppy Joe's to eat during the game.  I'm dressed in my Bronco shirt, and have on my lucky blue earrings made by my friend Judy. I even put on more blue eyeshadow than usual today.   I decided to take a selfie on my computer to post here.  Note that the glasses had to go on so I could see what I was doing. 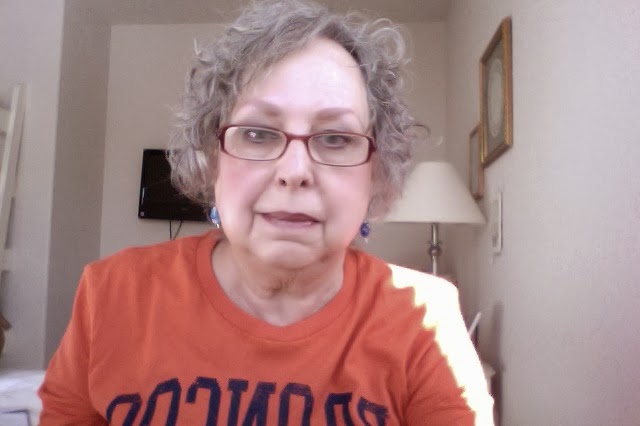 Before I can cook, I must run to the store for a few things.  I'll put on my orange coat before I go.

GO BRONCOS!  We are all back home under a clear blue sky cheering you on.